Italian Matteo Basilé is a fifth generation visual artist with a passion for wondrous monstrosity. He spoke to The Yak about Bali, his inspirations and why he loves dwarves.

Matteo, can you tell us a little about yourself, how you grew up and where you are from. When did you first discover art, creativity, photography?

I was born in Rome in 1974 and I come from a family, the Cascella, that has produced visual artists for the last five generations. I grew up in an atmosphere permeated with art. This was very important for me from an intellectual point of view, but it resulted in a total refusal on my part towards crafting or moulding any kind of physical matter. I never wanted to paint or carve and when I draw I only do so for my personal pleasure. Nonetheless, there is somehow imbedded in my DNA the memory of myself as a painter, a sculptor, a draftsman or a ceramicist. Somehow, I feel that the history of my family has bequeathed me with the memory of art-making. I started very young, approaching the world of street and graffiti art. Graffiti represented for me a vehicle to break with the traditional art system, art for art that my parents practiced and lived. When I was 16, the first groups of graffiti artists started to appear on the Roman scene, I felt I was breathing again. From there I started to experiment with digital media with computers and with the Internet, foreseeing a different way to make and think art, where images could also include sound and speed. I then founded the studio Cromosoma where, together with other digital artists, I merged art and technology. We soon became a reference point for the media (cinema) and the fashion world. Later I concentrated my research on printing techniques and supports, creating the term Plotter-painting. In other words it was the time in which digital art was born in Italy.

What is your involvement with Bali?

I came to Bali with my wife Dominique in 2006, and we have been struck by its energy and beauty. We decided at first to move here for a few months to realize the project ’Thisoriented’, that I later presented at the 53rd Venice Biennial in 2009. The project was focused on my perception of a contemporary cultural revolution that is taking place in Asia. We had travelled for years throughout South East Asia and we somehow got the sense that the future of the world is being negotiated from here.

Why photography and videography as your principal media?

I think those two media are absolutely extraordinary, not only in the way they address the present but also to represent the past and the future. Those are universal means, adopted throughout the world by both the art and the commercial system, often generating short-circuits between the two. In fact, we increasingly find ourselves in front of artworks that emulate commercials or fashion.

How do you start a project…how does the idea build?

I am a visionary artist who constantly looks at history and tradition to realize human landscapes for the future. My projects and stories are often born from my dreams, from encounters with extraordinary people that I meet when I am crossing a place at a particular moment. As an artist of the new Millennium I adopt a voracious attitude towards any sound, alphabet and visual form. Art and cinema have always constituted a great form of inspiration for me. I love Pasolini and Fellini’s Neorealism, filled with voluptuous women, dwarfs and ballerinas. I love Stanley Kubrick…Spike Lee…David Lynch…Caravaggio, Parmigianino, Goya, Keith Haring…from each of them I get inspiration. I sample elements then transform them into something different to be transfigured through my works. 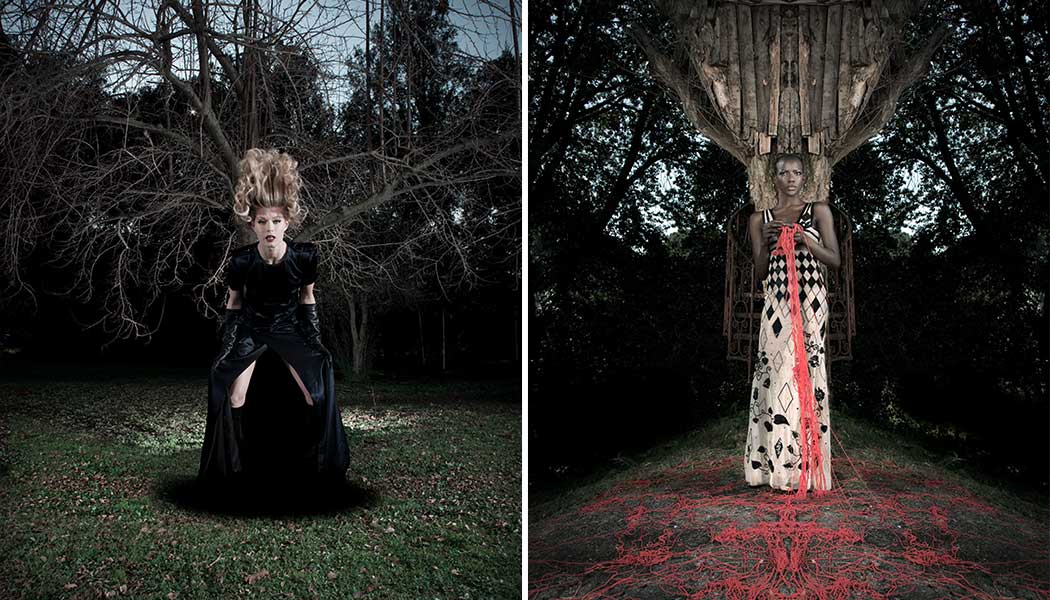 What are the themes that you explore most in your work?

I address the nature and inclinations of human beings and their somehow wonderous monstruosity. My images travel between East and West, visually merging Italian Baroque, the sinous forms of Asia, the surprising beauty of an older woman and the mysterious gaze of an Indonesian child. My aesthetic relationship with beauty often does not correspond to classical canons. I am fascinated by imperfections and from defects that metamorphose a woman or a man into beautiful beings…although apparently ugly. Thus, I believe in the existence of an absolute beauty that nonetheless I find somehow annoying to account. Photography is the principal medium for the fashion world where subjects always appear as appealing and photogenic. Differently, my works are spiritual portraits where inner beauty and physical imperfection coincide. I explore and try to emphasize those invisible human sides that too often people tend to ignore.

Does contemporary art always require a dialogue to explain it, do you think?

Maybe I will say something against the tide, not really democratic, but I don’t believe that all forms of art are for everyone…if we think about music, literature or cinema…there are things you would never listen to, or movies you would never watch…because you are not interested or because there is something about it that exceeds your sensibility or your ability to comprehend a certain language. Instead when it comes to visual art, people often do not consider that it is a language that requires universal subtitles to be understood by everyone…otherwise it is not art…it reminds me of the people you find aside at the museum that say,:“I could have done that!”

We love the Biasa campaign that appears in The Yak. Tell us how that came about.

The collaboration with Biasa has been a natural passage and at the same time a coincidence. Susanna Perini is a dear friend and I did my first exhibition with her in Bali. I think she is one of the sharpest and most intelligent talent-scouts for Indonesian contemporary art. She was excellent in merging the love for art and fashion in a particular formula. When she asked me to think about a new campaign for Biasa I thought about a series of photos that are, I think, unusual as traditional fashion images.

Technically you also appear to be extremely capable; not only as an artist but technologically adept as well…is this important for your work?

I am a technology addict…always researching new systems, media and techniques to realise my works. On the other side I always try to be invisible…I feel that the work must talk for itself and take the viewer into a different dimension. Man Ray used to say: For sure, there will always be somebody that will only look to the technique and will ask himself ‘how’, while others with a more curious nature will ask ‘why’. Let’s put it this way: today the curiosity of the single individual is increasingly rarified, and perhaps the artists are there to remind us that things are not always what they appear to be.

What’s next for Matteo Basilé?

I recently opened my personal exhibition in Milan at the Galleria Pack entitled Thishumanity, a project almost entirely realized in Bali. Thishumanity is the reason that brought me to Asia generally and to Bali specifically. It drove me to experiment from another point of view, the way in which the world is mutating. Thishumanity carries the double meaning of a humanity represented in its struggle to survive no matter what. I imagined a series of battles in which different humanities, different minorities, would fight. The project is meant to explore the causes that lead groups of people to fight each other. The first chapter of the series is women in battle. Women that fight other women to find within this ultimate gesture an identity that they feel they are losing. A feminine identity as mothers, women and warriors… but never as a men. The work is a homage to women and life. A collective portrait of 140 women from different nationalities and generations, a tribute to femininity. The next chapter will be probably realised in Russia…other imaginary armies, maybe Catholics against orthodox.