AH, ‘the muscles from Brussels’. Where would action movies of the late ’80s and early ’90s have been without our friend the famous Flemish bodybuilder and martial artist? Remember such classics as Universal Soldier, Timecop, and Hard Target? Yeah, we’re a bit hazy, too, but they were pretty successful at the time. Apparently, he’s not keen on the nickname; he reputedly once claimed that, “it’s like I’m known as a shellfish.” Well, English isn’t his first language.

The young Jean-Claude was hardly an obvious candidate for Hollywood stardom. Born in 1960 to Eugène and Eliana Van Varenberg, he was a scrawny kid whose father was an accountant and flower salesman. Noting his son’s lack of physical strength, however, Eugène steered him into martial arts at age 10 or 11 (depending upon which biography you read). By age 16, Van Varenberg junior had also taken up ballet, and claimed that, “if you can survive a ballet workout, you can survive a workout in any other sport”. His record in full-contact karate and kickboxing is impressive, if contested. No one disputes, however, that he can do the splits on chairs.

It’s doubtful we would have heard of him at all if not for the name change. Would you go and watch a film starring a martial artist named Jean-Claude Van Varenberg? 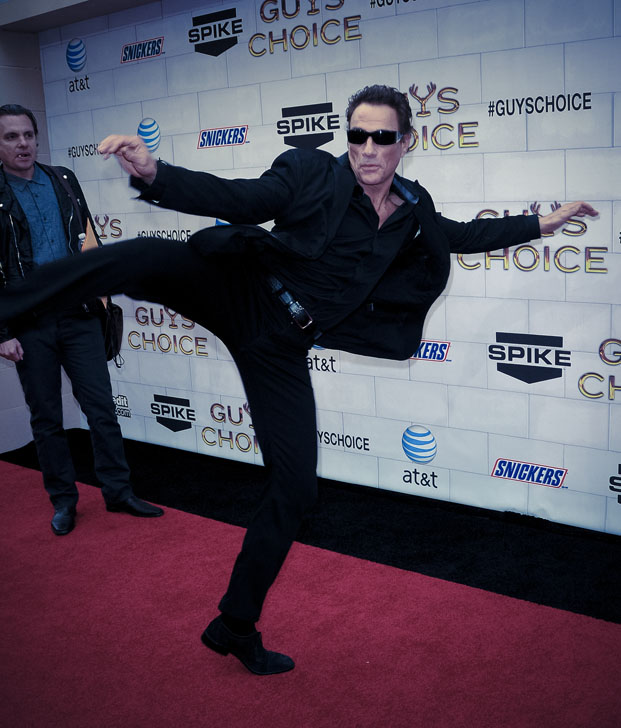 Armed with his new bulletproof moniker and the companionship of his childhood friend Michael Qissi, though, Van Damme relocated to Hollywood and assumed such illustrious roles as ‘Gay Karate Man’ in the obscure Monaco Forever. Eventually, after years as a carpet layer, bouncer, and pizza delivery man, the big breakthrough came. Bloodsport, shot on a budget of $1.5 million in Hong Kong and only recut and released at Van Damme’s insistence, hit the (relatively) big time and made Van Damme a star.

The rest is mainly testosterone-fuelled history, until Van Damme faded into obscurity in the mid-’90s. Struggling with the fractious ending of a failing marriage and an addiction to cocaine, he starred in a succession of stinkers. The Quest, anyone? Derailed? Yeah, it’s probably for the best. In 1996, he checked into the Daniel Freeman

Marina Hospital in Los Angeles to undertake a 30-day substance abuse treatment. He relapsed after leaving the programme within a week. How surprising.

Of course, his profile in Bali has been lifted by his association with white water rafting on the island, but he’s long been in the Hollywood doldrums. Besides, he’s more than 50 years old now; a bit over the hill for an action film star (don’t tell Arnie or Sly we said that). How, then, has one of the inevitable answers to the famous “name three famous Belgians” conundrum been occupying himself since he slid off the A-list?

Naturally, there was an ill-advised clothing line. Launched in 2001, Dammage7 might as well have been pitched straight into the Bermuda Triangle for all the evidence that can still be found of its existence. It was initially sold at Harrods, but has long since vanished from the shelves of … well, everywhere. Even the website that was originally set up to promote it has now disappeared.

After at least a dozen years in the wilderness, he finally made a bona fide return to form in 2008. Far from being a formulaic ass-kicking flick, however, JCVD stars Van

Damme as a beleaguered action film star who finds himself entangled in a post-office heist in Brussels. It seems that his time away from the spotlight has bred a more ironic, self-reflective side to his character, which he showcases to great effect. Time magazine rated his performance as the second best of the year, and the film was an indie hit. He’s followed it up by playing the voice of ‘Master Croc’ in Kung Fu Panda 2, and returned to more familiar territory in The Expendables 2.

A trifle bizarrely, he also seems keen on a return to the ring. He’s been doggedly pursuing a bout with Thailand’s first ever Olympic gold medallist, Somluck Kamsing, since 2009. The fight, slated to take place under modified Muay Thai rules (no elbows that might bruise J-C’s expensive face) has shifted prospective venue more times than we’ve shifted from Potato Head to Ku De Ta. First it was taking place in Las Vegas, then Bangkok, and now, potentially, Dubai, Moscow, or Grozny. In between fighting and filming, he’s even found time to offend campaigners by partying with Chechnya’s president Ramzan Kadyrov, a man linked to multiple human rights abuses.

Like that other ’80s darling Mickey Rourke, everyone’s highlight of the low countries looked to have hit the canvas for a while there. He took some serious body blows, and it began to seem that he was out for the count. With another Universal Soldier on the way, though, and a possible role in The Expendables 3, if it ever comes to fruition, Van Damme is doing what every action star does best; coming back for a sequel.