The Best Food In Ubud 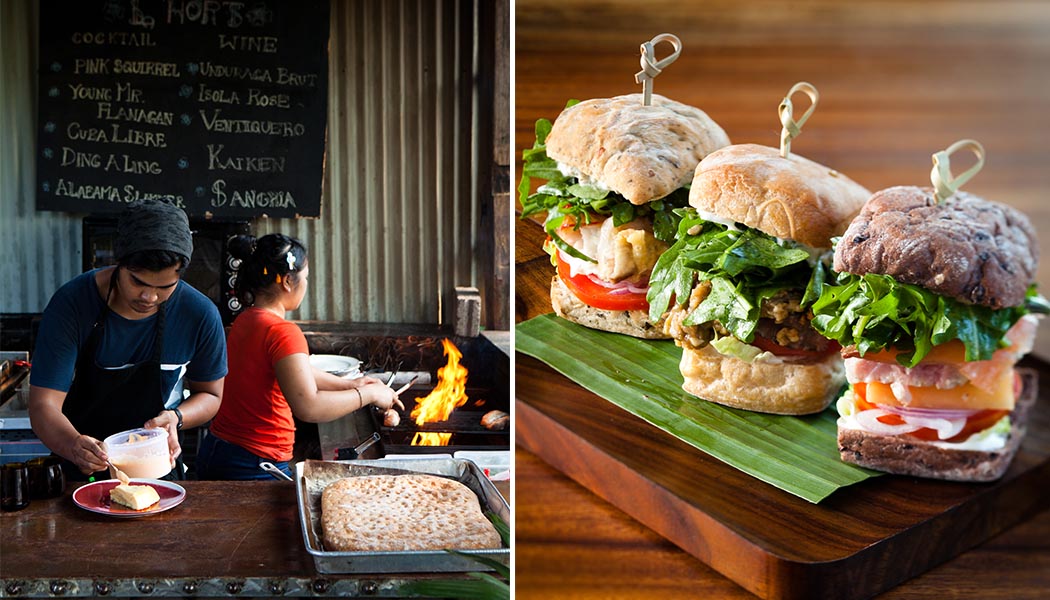 Ubud is the yin and yang of destinations, the polar opposites of spiritualism and hedonism creating a perfect storm. Discovered decades ago by travelling artists, it remains a vibrant creative hub. These days, however, some of the most notable artistry appears on plates created by the hill town’s celebrated chefs.

Taking their cue from the high-flying chefs of France, Italy and even Australia, many of the most notable of Ubud’s elite chefs have clearly decided that not everyone wants to go gourmet every day and have adapted their recipes to meet the more humble dining ambitions of mere mortals. Getting real in Ubud now takes on a whole new meaning and that can only be good news for foodies.

The buses head for Ubud daily, turning out masses of day visitors who come to watch dance performances, haggle at the local markets and turn up in droves to Ibu Oka’s famous babi guling restaurant and Bebek Bengkil, aka The Dirty Duck, where the deep fried local duck is so popular the restaurant seems to expand every time I visit. 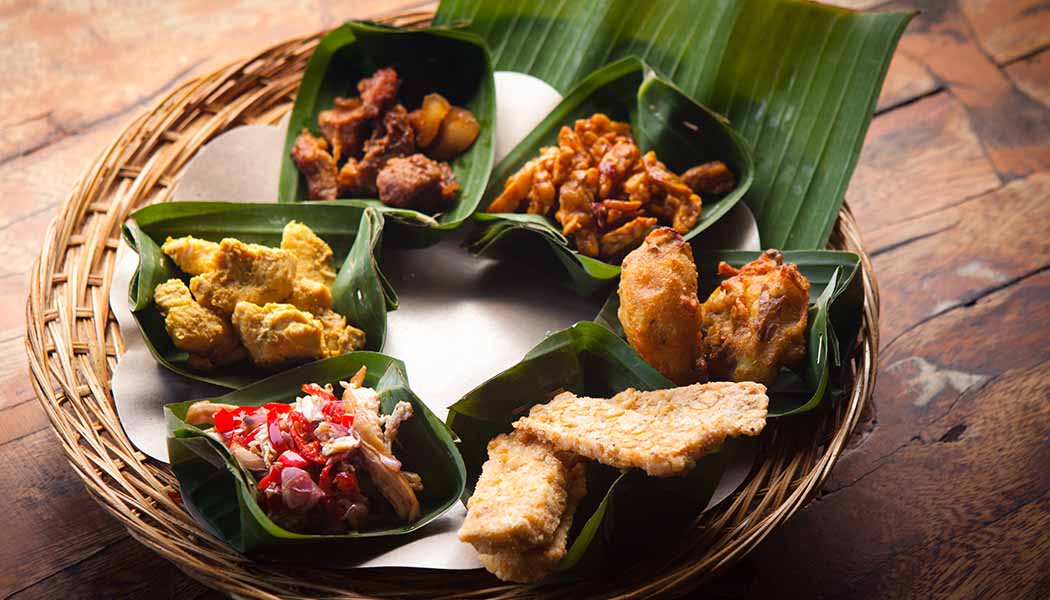 On the opposite end are the never-ending parade of yogis who slam down almond milk lattes and chia porridge in search of wi-fi and enlightenment, in equal measure. Strangely enough, the two worlds barely collide and many visitors are completely unaware of what awaits them behind the shiny windows and rusty facades (in some cases) offering some of Bali’s best dining.

Ubud has long been a foodie destination. A decade ago the choices were either go local or head to one of the stunning five star resorts where fine dining was world class. One chef changed all that in a major way, and the way local and international chefs incorporate local ingredients with classical cooking techniques. Chris Salans is Bali’s most awarded chef. His restaurant Mozaic remains a stand out. The degustation-only garden restaurant combines French cooking with local herbs, spices and exotic ingredients in a way that invites superlatives. 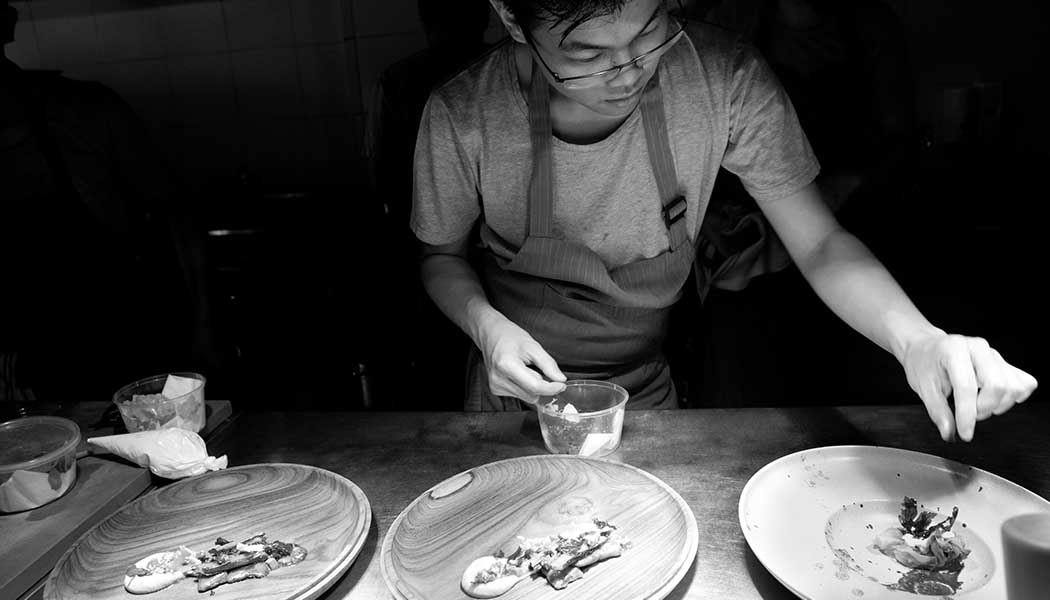 Some have incorporated his ideas, while others have blazed their own trail and Ubud has once again experienced a transformation of sorts. Fine dining still rates highly here but many of the most talented chefs have scaled down and opened more casual restaurants that offer accessible food at affordable prices. Without compromising on quality, nor their culinary vision, they are very literally taking it to the streets.

Locavore is neither large nor fancy. Co-owned by two talented chefs, Eelke Plasmeijer and his partner Ray Adriansyah, Locavore is dedicated to local and indigenous ingredients. The restaurant hit Trip Advisor’s number one within weeks of opening and remains one of the foodie’s favourites. 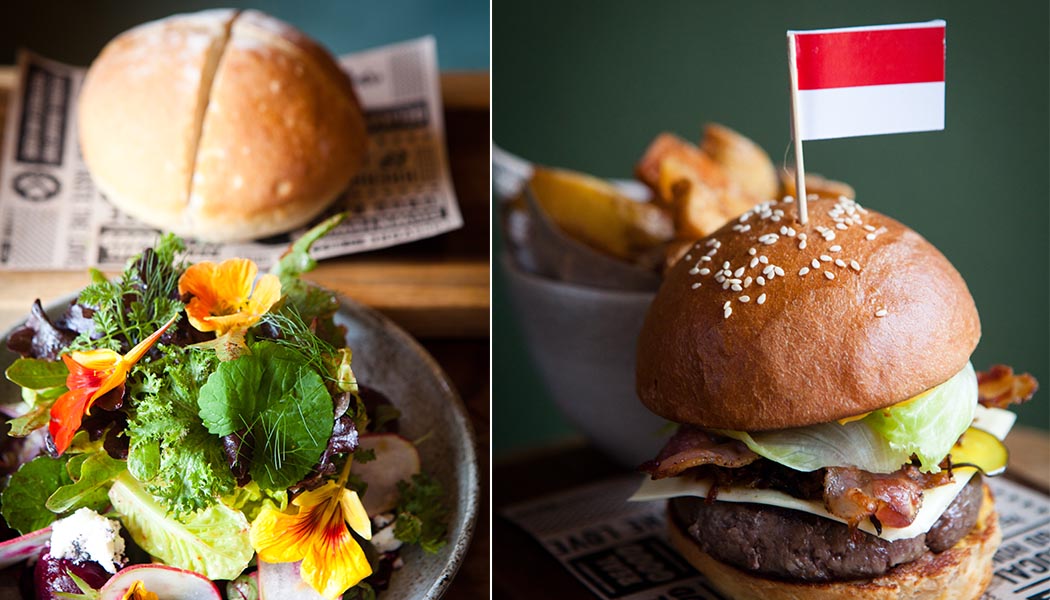 Across the road, they have created Locavore-to-go, a café that pays homage to their food philosophy in a more casual environment. This is nose to tail eating with a nod to local, organic suppliers and their mastery of butchery. Egg and bacon rolls are transformed with organic, house-cured bacon, home-made brioche rolls, crowned with organic duck eggs supplied by their artisan breeder. Previously Locavore refused to sell beef, as they claimed the local beef just didn’t cut it. So I was surprised when they suggested we sample their local wagyu burger and delighted to discover that they have found a supplier in Java who meets their standards. So beef is once again on the menu.

In keeping with the Locavore philosophy, everything from the salad, grown in their own small organic plot, to the bread and the chutneys, is made in-house. Buyers go wild over their local, organic meat, including glorious confit organic pork, artisan sausages, and plump local duck, as well as pates and terrines, chutneys, sauces and jams. For lunch with friends, I can’t resist the original restaurant, but to grab a quick bite and quench the thirst with some of their incredible juices, fruit teas and smoothie concoctions, you can’t beat this one for taste and quality. 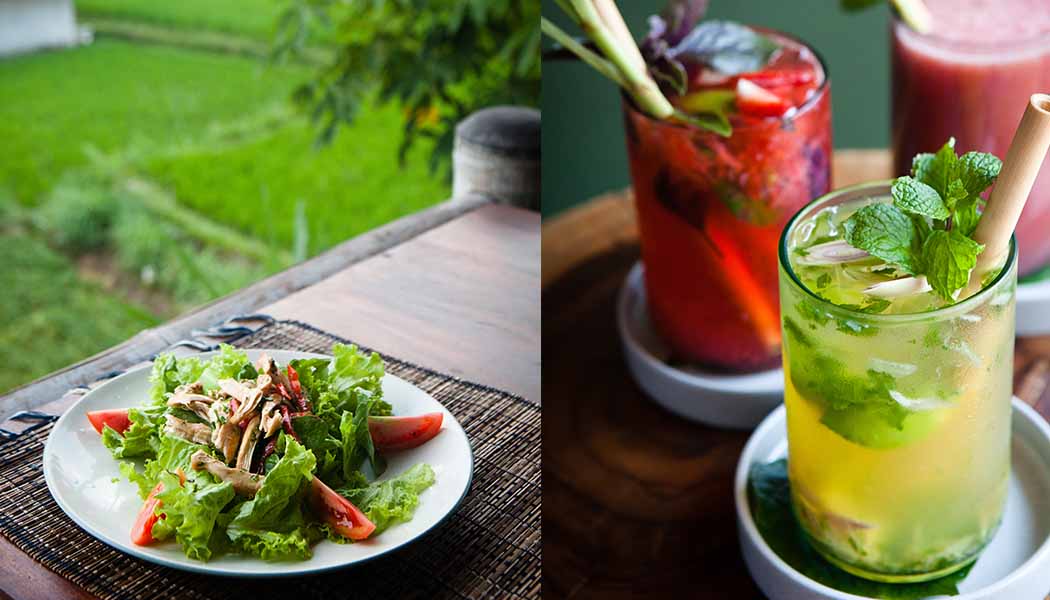 Will Meyrick’s original restaurant Sarong, in the flasher environs of Seminyak, is an homage to Asian street food and remains a sell out nightly, while the more laid back Mama San is also home to some of the South’s hottest table reservations. The newest kid on the block, Tiger Palm has gone more street than fine and is winning over both new and seasoned customers. Ubud’s Hujan Locale is located on a quaint side street just before Seniman Coffee House.

Here Chef Will has translated many of his most popular dishes including deeply spicy laksas, an exotic homage to Indonesian street food and some lively Thai dishes together with some home-spun classics he refers to as “British nursery food”.

The two-story restaurant is a nice addition to the mix here and although some disclaim his mixed up approach, hoping for a Mama San replica, Hujan Locale is relaxed, offers enough spice to satisfy and something sweeter for those that shy away from the heat. The cocktails here are well worth a try and many employ local ingredients like lemon grass, ginger, local basil and chilli in surprising ways 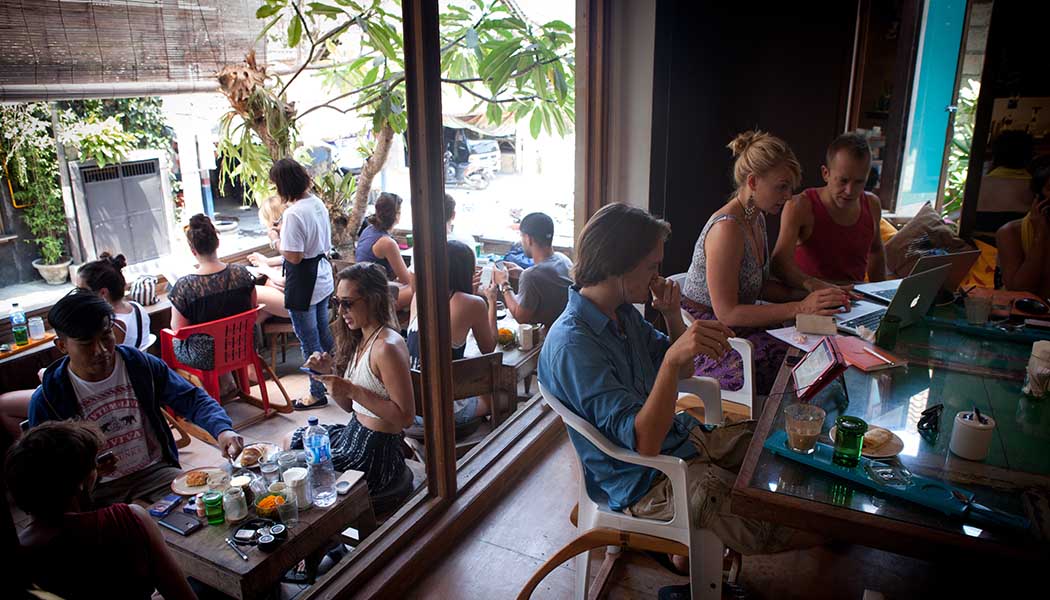 Back in central Ubud, our quest leads us to Arang Sate Bar. Indonesian chef Agung Nugroho left his native Jakarta to study in New York where he ended up in the kitchens of notable restaurants like Nobu, Buddhakan, Perry Street and Spice Market before heading home two decades later to rediscover Indonesian food. His Seminyak restaurant Chandi is another regular on our food diaries with incredible renditions of favourites like nasi goreng-gone-gourmet and an amazing rijstaffel that will have you pulling out your cameras. At his latest creation, Arang Sate bar, located in the hub of Ubud, the busloads wander past oblivious to what lies within. Those who have discovered it however are lush with the flavour combinations and his unique approach to small plates with both authentic and flash sate made to order.

“Sate is a food that is seen across Indonesia in all sorts of guises, each region has its own style. It’s a language that everyone can understand, food everyone can relate to,” he explains. 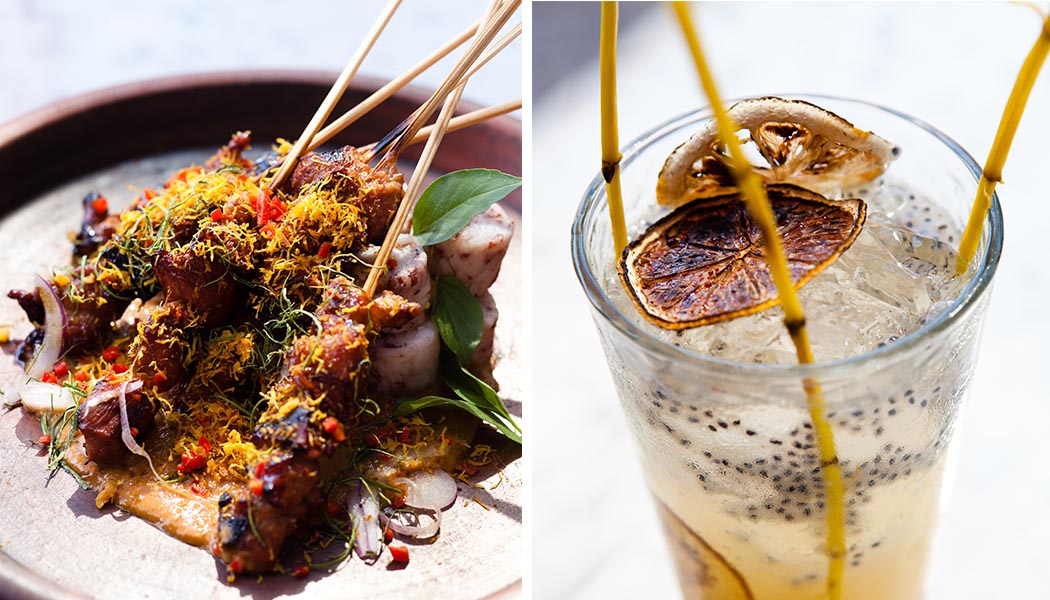 The sate here include representations from all the regions of Bali, where pork and duck are incredibly popular, to Java where the meat is sweeter and further afield where spice always plays a part. We found it hard to stop at a plate of sweet Madurese duck sate, made with tender duck breast bathed in a tangy peanut sauce, followed by lamb bakso, imported lamb stuffed with blue cheese, a tenderloin sate topped with quail egg, and grilled asparagus sate which all arrived in short order. The exotic drinks, festooned with lotus root and lemongrass were every bit as good as the food. Taking local recipes and deconstructing them as gourmet bites is the strength of this industrial-style sate and cocktail bar.

We could not pass up Chris Salans’ latest culinary inspiration, a street-side diner called Spice, just doors away from Arang Sate Bar. Here Singaporean Chef, Abu Goh puts Salans’ food philosophy to work in a range of small plates and a la carte dishes that all incorporate local spices. Sliders, the trendy go-to-food of the day (it seems), come in three different flavours. The beef on little ciabatta buns is dressed with a sambal spice, the tuna burger is served in black rice bread and a vegetarian version is big on flavour. Crispy fried chicken is served with a rujak salad (a spicy peanut-sauced salad made with green mango) with a fresh, torch ginger dipping sauce and is among the most popular choices.

“This is ingredient-driven food, as we do in Mozaic, and local spices feature in every dish,” explains Chris who is overseeing the café when we drop by.

Our last stop is the divinely decadent Room4Dessert where New York pastry chef, Will Goldfarb, made the move from the pouty favourite, glam beach bar, Ku De Ta, down south to open his own dessert-driven restaurant close to Naughty Nuri’s famous rib shack. The rusty façade is the perfect foil for high-end desserts offered with a matching cocktail menu.

Out back, Will has created a Catalan-style wine garden, L’Hort, a backyard venue where imported hams, home-made gazpacho, a braise of the day (today’s is slow cooked wagyu beef shin with a rich wine sauce and a touch of citrus) and tapas plates rule the menu. A reclaimed barbecue chars the home-made sourdough for tomato bread and the cocktail menu is legendary among Ubud chefs, who often wind down after a busy night in this garden. Inside locally made artisan chocolate dances with spices and herbs, Balinese meringue wears a tropical hat and the blues tunes pervade.

Ubud is a hot destination for foodies and now it seems that it is priced to please as well. Whether it is local, high-end fine dining, creative vegetarian, great cafes or world-class chefs offering gourmet street food, Ubud has it all. There’s no doubt, food lovers can celebrate this destination, the only question is; will you have time for it all?