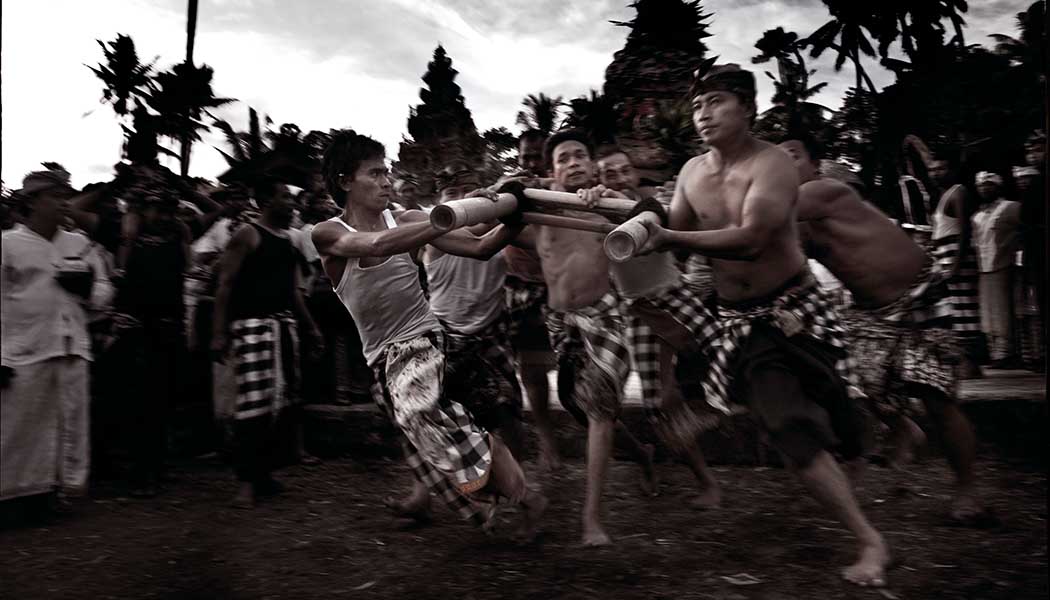 Diana Darling dissects the phenomenon of trance in Bali. Photos by Rio Helmi.

Mention trance and the inner voyeur leaps with joy. And why not? Human beings are curious about the ‘known unknowns’ such as when one will die and what it’s like over There. Trance (think ‘trans-’) is thought to be a way of communing with otherwise inaccessible realms and beings, if any. And there is always the allure of watching people do things they otherwise never would – or never could – do.

Our morbid fascination with trance is particularly gratified in Bali, where trance is induced in a variety of spectacular rituals. There may be fire, tears, knives, bare bodies, supernatural masks, scented smoke, heart-rattling music, screams, gore, or dainty dancing children. Here is where music, dance, ritual and theatre converge and convulse, chilling the blood. Yet the atmosphere of dread is lit with a strange balm, perhaps because of the unflappable composure of the priests as they go about, expressionless, dispensing holy water to bring people out of trance. 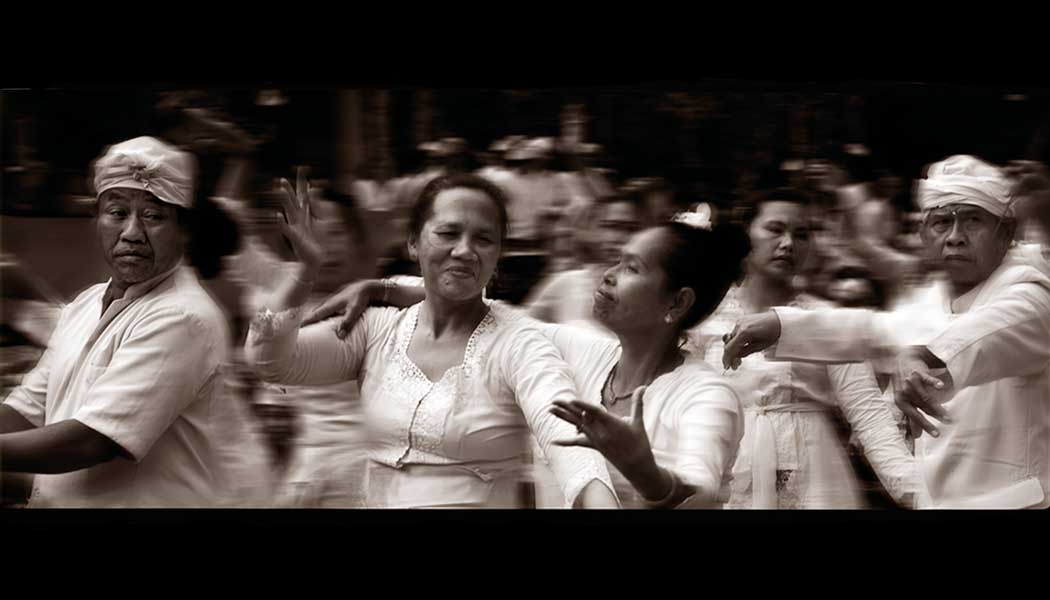 Only a small portion of Balinese trance has been packaged for the tourist market. The most conspicuously advertised are the ‘Barong & Kris Dance’ and the ‘Fire Dance’ (which may be curtly described, respectively, as dragon vs. witch with self-stabbing followers, and riding a hobby horse barefoot through burning coals; consult any guide book for details.) Naturally there is much speculation about whether or not people performing for tourists are really in trance. Years ago, a young girl who performed twice a week in an Angel & Fire Dance told me that they were usually acting but that sometimes they slipped into trance anyway. The sacred is still never very far away in Bali.

Outside the context of tourism, trance in the lives of Balinese could be divided into four general sorts: temple trance; medicinal trance; family trance; and unscheduled trance.

Temple trance comprises not only the famous confrontation between the Barong and Rangda on the anniversaries (odalan) of certain temples but also any ritual that allows the temple’s resident deities to express themselves through human beings. The procedure is highly prescribed and specific to the particular temple. At Pura Dalem Pengerebongan in Kesiman, Denpasar, there is a series of ritual trance opportunities, including one for the crowd, where with the flick of a certain kind of holy water dozens of people snap into trance and are helped by their friends to circumnambulate the temple’s performance pavilion in a crush of hundreds of people. At the ancient temple Pura Sakenan on Serangan Island, there is a regularly scheduled midnight council of the ancestral deities on the Saturday night of Kuningan. In Ubud, temple trance is rare, although the Barong and Rangda rite (usually referred to as ‘Calonarang’, after the play leading up to it) has always taken place on the odalan of Pura Dalem Puri at the Peliatan graveyard in Tebesaya. Until recently when Ubud formed its own Calonarang group, this was performed by a troupe from outside Ubud. 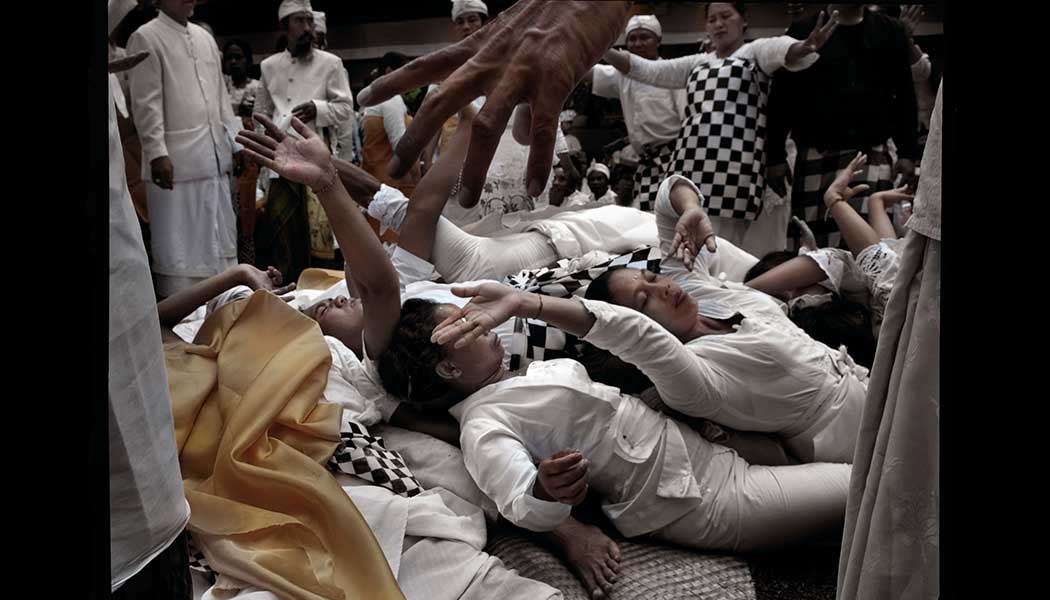 Medicinal trance would include the many forms of Sanghyang, which generically is accompanied by a chorus of singers and intended to exorcise whatever malevolent forces might be causing an epidemic or other communal ills. Sanghyang ranges from the lovely Sanghyang Dedari, danced by young girls, to terrifying animal trance. Genuine Sanghyang has become rare since the advent of antibiotics and chemical pesticides. The above-mentioned ‘Fire Dance’ is Sanghyang Jaran (‘horse deity’ but in fact the incarnating spirit is said to be a celestial warrior). It is often performed with Kecak (‘Monkey Dance’). Kecak – which was first choreographed in 1931 by I Wayan Limbak and Walter Spies for the film Insel der Daemonen by Victor Baron von Plessen – does not have trance; but it is derived from the Sanghyang chorus. Many individuals consult healer-sorcerers (balian) for aid in dealing with illness or magical afflictions, and this often entails trance research. There is a vast, highly detailed, and rather secret literature associated with this magico-medical lore.

Family trance deals with matters pertaining to deceased family members – mainly requests from the dead in regard to upcoming funerary rites; and the identity of reincarnating ancestors when a baby is born. The specialist whom one  consults for this is known as a balian ketakson. How they do it is a complete mystery. Balinese intellectuals warn people not to be gullible. An article in the Balinese magazine Raditya (5 February, 2008) asks: “Is it true the soul of our ancestors can talk with us?” (Benarkah Roh Leluhur Bisa Diajak Bicara?) The answer is yes, but the writer advises that when you go to a trance medium, you must careful to distinguish whether the spirit’s requests come from the ancestor, a demon, or a god.

Unscheduled trance is something many Balinese find troubling, especially when it happens in school, as it does surprisingly often. The local press frequently reports outbreaks of trance among schoolchildren. The trance is usually contagious and may take place over several days with accumulating severity. 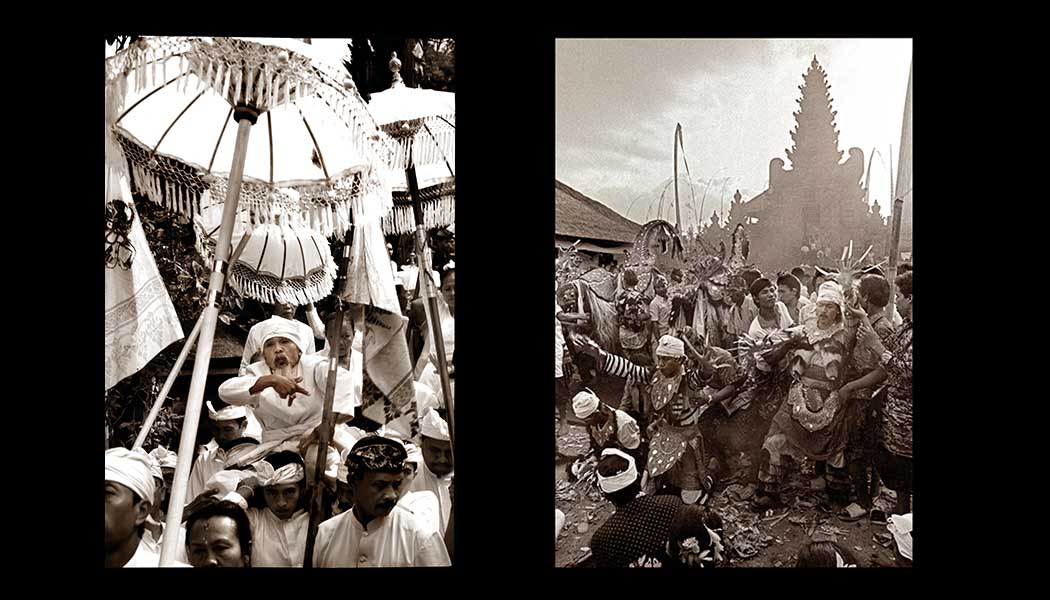 At least one incidence of widespread trance in an elementary school in Denpasar was documented on national television: in 2008 from October 20th to the 24th, children who had been rehearsing for a performance of Calonarang for a school event were overtaken by trance, with a teacher finally succumbing as well when she was invaded by the spirit of a tiger.

Other instances of unscheduled trance include what is sometimes described as psychotic behaviour; and sometimes it is simply a matter of culturally elaborate fraud. As Bali’s population grows more introspective about its religion and culture, many Balinese are raising questions about  the nature of trance, a topic addressed in recent public discussions among community leaders from the domains of religion, culture, and psychiatry. All seem to agree that trance (kerauhan) comprises different sorts of experience, and distinguish between negative (pathological) trance and genuine (or “normal”) trance, when the individual is possessed by a deity. A leading figure in these discussions is the Balinese psychiatrist Prof. Dr. dr Luh Ketut Suryani, founder of the Suryani Institute for Mental Health, whose understanding of trance stems partly from her experience as a balian when she was an adolescent, and whose holistic treatment of people who suffer from involuntary trance attacks may include meditation, Western pharmacotherapy, and coordination with a traditional healer.

Difficult as it is to say anything definitive about trance, there seems to be little doubt among Balinese that there are different kinds of invisible beings who sometimes enter the bodies of human beings; that psychotic trance is when the spiritual health of the individual is too weak to screen out disruptive spirits; that high priests and intellectuals do not go into trance; and that it all entails a certain factor of belief.