Those Were The Days #3

Fizz and fiireworks at the Bush and Victor Mason has a further brush with the fuzz. 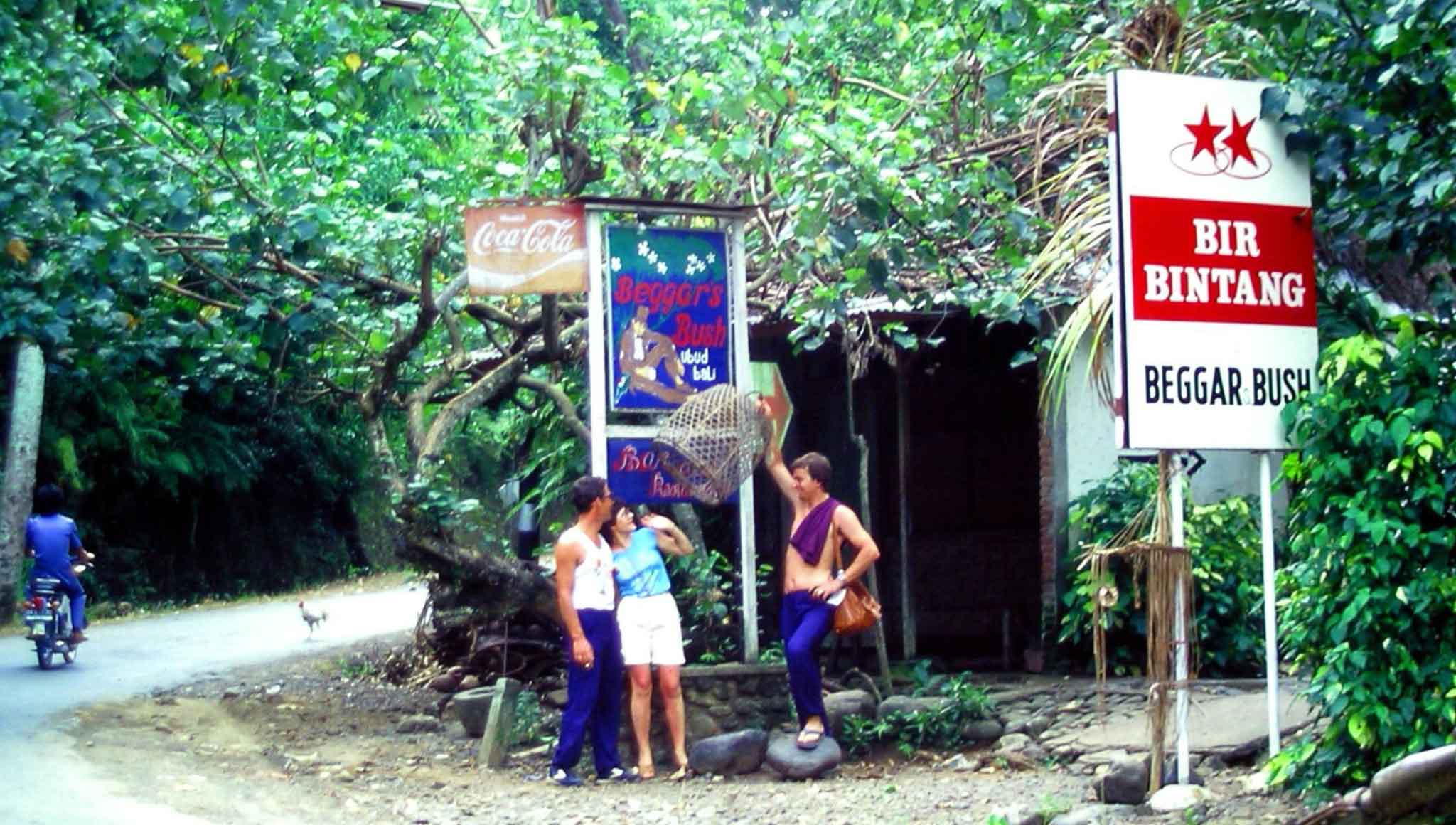 The Hosiers will dine at the Legge,
The Drapers at the signe of the Brush;
The Fletchers to Robin-hood will goe,
And the Spend-thrift to Beggers Bush.
(Londons Ordinarie or Every Man in his Humour, Coles, F. et al.
London. 1647 – 1679)

What’s so notable about this verse – one of twenty odd extant in three versions at the Bodleian Library aside from its execrable rhyming, is that spendthrifts go to Beggars Bush. From the same ballad we learn that:

The Beggers they must take their way
To the Egge-shell and the Whippe.

But why Beggars Bush? It certainly wasn’t dreamt up in a moment of post-prandial inspiration. Nor was it my intention to give this name to the new establishment in Tjampuhan. I’d planned to call it Hare and Hounds, whence the association with our new-found chapter of the Hash House Harriers. Hare and Hounds was the name of the game, as readers of Tom Brown’s Schooldays will instantly recall.

The original Hare and Hounds was described by Jacob Larwood in his History of Sign-boards (London. 1866) as “one of those places associated with the good old customs of our ancestors. This notorious house stood nearly in the centre of what is now New Oxford Street, and was a favourite resort of Londoners in the sixteenth and seventeenth centuries. But, previous to the reign of Charles II, it was known by the sign of Beggars Bush, the name becoming altered to Hare and Hounds in consequence of a hare having been hunted and caught on the premises, where it was afterwards cooked and eaten.”

There are loads of Hare and Hounds pubs everywhere – even one in Vientiane, founded by energetic erstwhile Hash Master Johnny ‘Labia’ Lips, former proprietor of Lips Night-Club and MacWilliams All-Nite Burger Stand in Seminyak. It was the late lamented Rob ‘Rooter’ Varley – one of our antediluvian alumni – who proposed that I adopt the earlier name. And so I did. It had a more earthy and authentic, not to say pungent, ring about it.

Yet still the persistent quizzing: Why have a pub in the first place? And always the sublime supposition that it must have been the last resort of a crapulent rabble-rouser who has been slung out of every other establishment in town.

It really wasn’t my idea at all. I blame the missus. No sooner had I returned from foreign fields to the fold – she suspecting correctly that her intended victim was not short of dosh – than I was accosted by black eyes blazing.

“You know, my love, that there is something I really want?”

“Well you won’t be cross if I tell you what it is, will you?”

“Of course not, silly; since when have I ever been cross with you?”

“All right – listen carefully. I want to have a restaurant!”

“Good God Almighty! A bleeding restaurant? Are you mad? Do you have any idea what that entails?” Plus a number of other expletives and expostulations in a smilar vein.

Patiently it was explained to me that having a restaurant would be a wonderful way in which to meet people. There was this lovely plot of land overlooking the river that belonged to my father-in-law. And besides, it would provide at least some modicum of security, in the event, say, that I should be run out of town for some serious misdemeanour, or run over by a tram in Hong Kong.

The solution manifested itself in a twinkling. “Right-oh honey – you can have your restaurant, but I must impose one condition, and that is – that I have a pub!”

And so the Beggars Bush was born. We opened our doors on the evening of Monday, November 5th, 1979 – with a BANG! Remember, remember, the 5th of November…There are still some around who won’t forget it in a hurry. The festive proceedings were preceded by a hash run, which was the most monumental cock-up of all time. The hare, who shall be nameless, committed the cardinal sin of flexing his scut and depositing his scent slap bang in the middle of the arterial track connecting Tjampuhan and Penestanan Kelod. Some school-children, returning home from tedious study, had had a field day spreading it far and wide, and gloating over the consequent confusion.

Sorrows were soon drowned, however. We had all the necessary ingredients, including 120 bottles of fizz – practically my entire annual allowance – and bangers galore. Kind hashers from Surabaya provided the latter. They had purchased four first-class tickets on GA – of which three return and one one-way. The one-way ticket was for a very large box, wrapped in brown paper and sealed with Sellotape. It sat in the front row in solitary splendour: at no stage did anyone enquire as to its contents. An old friend and house-guest from blighty took it upon herself to manufacture the guy. This consisted of one of my rather outré velveteen ensembles that had been shredded in a motor-cycling spill, and, more appropriately, a burnished djauk mask with fierce moustache and glittering mother-of-pearl teeth.

Unsurprisingly, it all went swimmingly, and hardly anyone minded the spontaneous eruption of kulkul drumming from far and near, following the fourth or fifth salvo of rockets and flares that rained down upon the Wos river valley. Then the fuzz arrived – in force! Though, by that time, the feux d’artifice were spent.

But the guy was confiscated. On no account were the incendiary activities to continue. Mollified somewhat by sucking-pig and fizz, the fuzz led the guy away to the local lock-up which, when you come to think about it, was only fitting. And the rest of the soiree was devoted to getting seriously stotious in accord with the good old customs of our ancestors.