A story about putting down the beers and taking up some bicycles. Words by Ano Mac and Jemma Scott. Images by Giang Gow.

Surfers are often pigeonholed as a rather one dimensional lot. When the surf goes flat the common perception is that they slip into the Deus Temple’s backyard to sit with their mates and sink an entire afternoon’s supply of Bintangs … before stumbling out into the night to sample the myriad evening distractions Canggu has to offer these days. And I’d be a liar if I said it’s never happened.

Recently though, with the bleak forecast of no waves for a full three days, Harrison Roach and Matt Cuddihy asked if they could borrow a couple of the pushbikes we have here at the Temple. Curiosity got the upper hand and we said we’d join them, loading up one of our trucks and heading for the hills, up into the cooler climes of the mountains where we were to forget all about belting back beers, at least for a little while.

Straight up, conventional we are not. No one would ever mistake us as coming from the serious side of bicycling. For one thing, the bikes that we were riding, flaunting single speeds, definitely aren’t your normal multi-geared road pushies ? built more in the vein of the old Dutch bikes you see plying their way about Amsterdam, simple steel frames with single speed ratchet cogs, hand pull brakes mounted on swept back handlebars and the old flying V hard leather seats ? anything but comfortable after more than a couple of hours.
The other item to set us aside from the serious art of bicycling was a paucity of lycra. Shorts and tees. Sneakers and caps. No point in changing your attire just to go for a ride in the mountains, right? Who would do that?

We rang our friends at Villa Puri Tupai to see if there was a vacancy, and we were in luck. Their compound, a beautiful collection of Javanese and Balinese traditional houses, is just far enough south of the bludgeoning Ubud centre so as not to be caught up in what Ubud has inescapably become ? a swarming mini metropolis of outlet stores, market stalls, new restaurants and alternative cafes plied, packed and crammed with tourist coaches and hire cars then puddle splashed against a backdrop of yoga and meditation set in the breathtaking Balinese vistas that drew them all up there in the first place.

No, that wasn’t what we were there for. We could have stayed on the coastal plains for that. We wanted to roam around the fringes, we were seeking that Bali that you see on old postcards, steeped in tradition and smothered in simplicity. Places where green is the predominant colour and you have the time and disposition to define a couple of thousand variations. We wanted to be in valleys that grabbed onto the morning mist until well after 10. Afternoons where you chased the last rays of the day in a desperate game of hide and seek down the hill.
There was method to our madness in our lad’s choice of vehicles, for all of us, this was a calm away from the storm. A chance to get off grid and between you and us, we found it. Though not initially.

First, we went up behind villages and down random tracks that were either badly broken road that would have played hell with our tyres or carried a constant stream of powered vehicles, both of which would have thwarted our efforts to find our own peddling paradise. We made a couple of phone calls and got onto the crew at Bali Road Bike. They brought that last missing piece of the puzzle to the table – local knowledge. Theirs was the good oil on where to go, without which we’d have found ourselves stranded amongst the back streets.

Once you get away from the coast, and the hustle and bustle of the built-up areas, it is amazing to see how quickly life slows down. The days took on an almost instantaneous predictability. We rode, we walked, we talked and we laughed ourselves silly in that close friend puerile fun way. We found a few of those hidden gems of uncrowded corners of Bali life. We took the time to stop, look out in awe over the fertile tropical carpet laid in front of us and appreciate the moment before we slungshot ourselves down the hills. It wasn’t plain sailing, and more than once we nearly came a cropper with wheel slips along perilous road edges, equipment malfunctions (like the one that rendered Harrison’s bike brakeless). But we washed these off in fits of more childish humour cajoling and coaxing each other on and on into more and more perilous positions.

There’s a lot to be said for pumping pedals uphill and gliding down beautifully smooth roads. For one thing, it is a bloody excellent cardio work out. We came across steep sections of uphill that forced us to dismount and allowed us the opportunity to reacquaint ourselves with the power of matey conversations. It took on a liquid form passing back and forth peppered with laughter and voices raised in jest that echoed against the auditorium walls of the jungle that towered about and embraced us.

We also found it a nice change to switch out our fast but, let’s face it, rather loud four stroke motorbikes, our go-to mode of transport when we are in Bali, for the light clicking sound thrown off of the single speed cog on the rear axle and the more sedate and finite speed that comes with bicycles. The feeling of the wind is still there, though on a bicycle it mingles with the light perspiration built up along the uphill exertion to create a cooling effect, an undershirt AC, maintaining our equilibriums and leaving us open to the thrill of working hard for simple rewards. Is it just as sweet as being astride a powered engine? Sometimes. 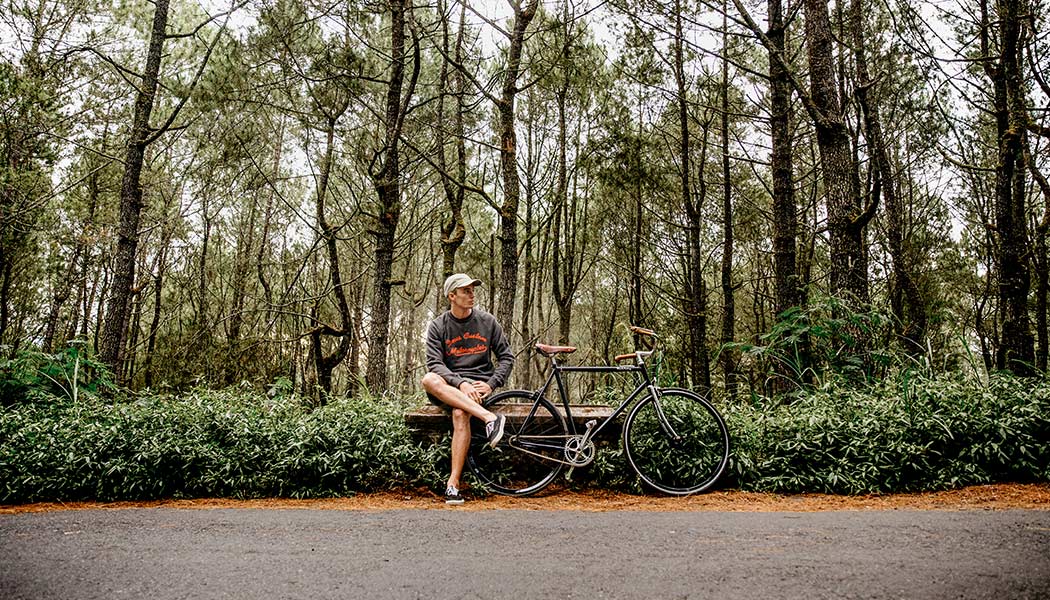 Nights we welcomed like an absent lover. We embraced them in their entirety. Fatigued from long days in the saddle we shrugged off the ordeal in the stylishly simple yet sumptuously comfortable confines of the Puri Tupai Villa compound. Delicious, nourishing feasts filled with fresh produce grown in the gardens melted the aches in our stomachs before one by one we retired … but not before grabbing something from the rather unexpected treat of a little library sprinkled with gems such as D.H Lawrence and even a Jack Kerouac. As expected though, none of us were too many pages in before silently drifting off.

You’ve heard the saying before, what goes up, must come down. We can’t defy gravity and we’re no different. Our time ran out and the magic of the past three days disappeared in the mere 40 minutes it took to drive back to our base in Canggu. We left empty handed, but not empty headed, we couldn’t. We’d all experienced something that left us yearning for more.