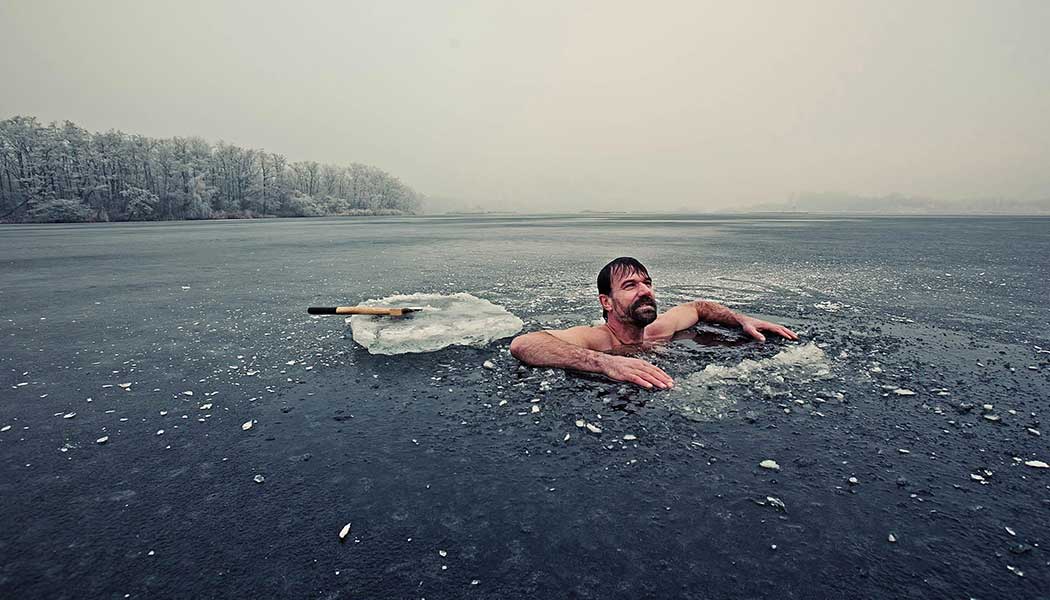 There are surely few more extraordinary men than Wim Hof. Known as ‘The Iceman’, this Dutch father of six is famous for pioneering a groundbreaking breathing technique that allows him – and his disciples – to withstand intense cold.

And by intense, we mean intense. The man has broken 26 world records – including one for the longest ice bath. In 2007 he climbed almost to the top of Mount Everest wearing nothing but shorts and shoes, failing only due to a recurring foot injury. A year later he broke his previous world record by staying immersed in ice for one hour and 13 minutes. He’s also climbed Mount Kilimanjaro in only shorts, completed a marathon above the Arctic Circle in Finland in temperatures of -20 degrees and in 2011 broke his endurance record once again by sitting in ice for almost two hours.

It’s hardly surprising the world considered him nothing more than a rather eccentric ‘extreme athlete’ for 25 years, but today he is the subject of international recognition for his breathing techniques which he says teach people to live a life free from fear.

Not only that but he believes his methods can alleviate symptoms of many auto-immune illnesses including multiple sclerosis, arthritis, diabetes, depression, anxiety, bipolar disorder and cancer. “With a simple breathing technique,” he says, “we have now changed the science books. We can win the war against cardiovascular disease and allow people to access their autonomic nervous system. They said it was not possible, but it is.”

Teaching breathing and cold exposure here in Bali, I decided to go to Poland and join the Wim Hof winter expedition, where participants get to immerse themselves in an ice bath and frozen rivers, climb a mountain in their shorts and get to connect and learn with the man himself.

It’s an intense experience that attracts a curious band of people, all of whom have travelled out of their comfort zone to learn from Wim Hof, who believes that we are able to regulate every part of our body with our brain and our breath, enabling us to withstand extreme cold. “When you go into an ice bath,” he says, “you feel the cold but the cold is just the trigger: it activates your soul!”

And this is really what the Wim Hof method is all about. He offers a practical toolkit to reconnect at a cellular level with ourselves, to feel into our bodies, to be present and aware of what is happening inside our brains. “We have found the direct link between nature and our soul,” he says.

There are many variations of the Wim Hof Method, but the basic version consists of three phases: controlled hyperventilation, exhalation and breath retention.

The first phase involves 30 cycles of breathing. Each cycle goes as follows: take a powerful breath in, fully filling the lungs. Breathe out by passively releasing the breath, but not actively exhaling. Repeat this cycle at a steady

rapid pace thirty times. Hof says that this form of hyperventilation may lead to tingling sensations or light-headedness. After completion of the 30 cycles of controlled hyperventilation, take another deep breath in, and let it out completely. Hold the breath for as long as possible.

When strong urges to breathe occur, take a full deep breath in. Hold the breath for around 15-20 seconds and let it go. The body may experience a normal head-rush sensation. These three phases may be repeated for three consecutive rounds.

Going into an ice bath could seem uncomfortable but for Wim, the goal is the exact opposite: “We are not seeking discomfort but finding real comfort, comfort of the mind. Out of the comfort zone, there is real comfort with yourself.”

“The real control of the mind is learning to let go and have your feelings augmented, past the narrowed consciousness, the way we were told.”

Scientists say only 15 to 20 percent of our brain is in our wishful control. “We learn a lot of stuff in our schools, all this unnecessary useless data in our brain that takes a lot of space. We go to work and then one day we ask ourselves: why am I here? War is all over the news and the world is always on the edge of collapsing. But it is not who we are: innocent, nice, good people. We can return to innocence, be the way Mother Nature made us.”

“Control of the mind is making yourself go inwards, consciously tapping into the subconscious part of the brain, the reptilian brain. The grey atmosphere. Reconnecting with yourself, your health and your strength gives you the key to open the door and unlock the power of your own mind.”

And once you know how to access the control room, you can go anywhere. Wim Hof continues: “It is a revolution in mental healthcare – a new way to treat depression, PTSD, bipolar, anxiety, sleep issues. We can now face all our demons, make friends with them, treat them like babies.”

“We live in a society driven by fear and when we operate from an unpleasant emotion base, we cannot access true happiness. Fear comes when we are not fully in control of what is happening in our own brain. Most people who don’t know about it are like babies. Nothing wrong with their legs – they just don’t know how to walk yet. You can learn how to walk.”

Alex Tsuk is leading breathing and cold exposure workshops inspired by the Wim Hof method and other pranayama techniques.