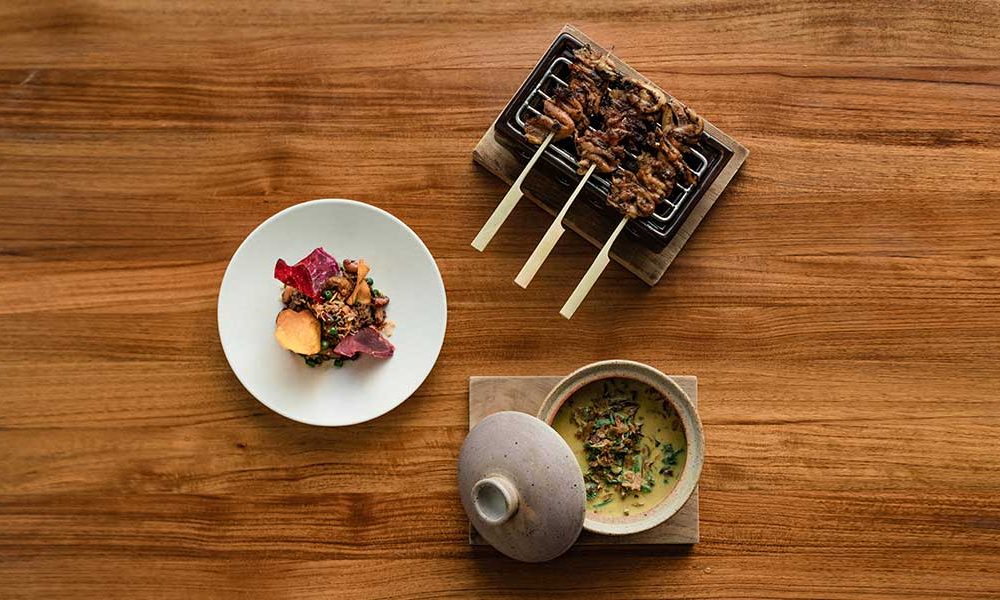 For the earth – Tanaman at Katamama introduces a modern Indonesian plant-based menu. 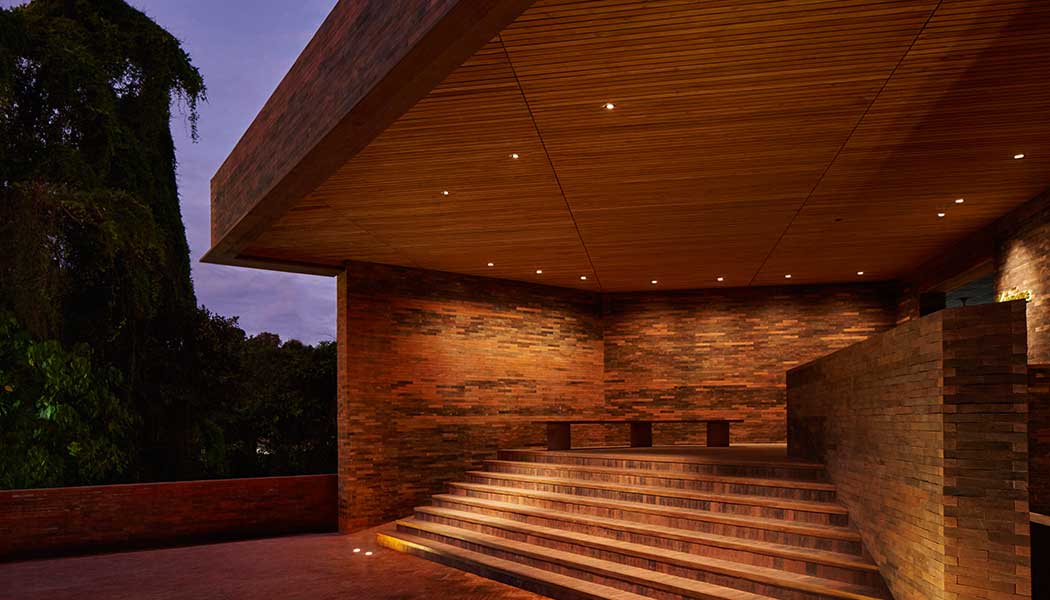 Give a great chef a challenge and watch the magic happen.

Chef Wayan Kresna Yasa grew up on the stunning island of Nusa Penida, a beautiful yet challenging place to begin life. His dreams took him to New York and Chicago where he discovered that all things are possible if the dream is big enough. Mastering the art of French cooking, his culinary memories are still bound to his childhood and it is at Potato Head Beach Club where it all comes together in one delicious package.

Emerging as one of Bali’s most creative chefs, Wayan has revolutionized the menus at Potato Head Beach Club with a forward thinking and creative approach to local, sustainable ingredients and zero waste policies. Turning his hand to his latest challenge, Tanaman, the atmospheric new restaurant concept at Katamama, sees him working with a talented team to introduce a plant-based menu that sparkles with originality yet harks back to dishes they are very familiar with. 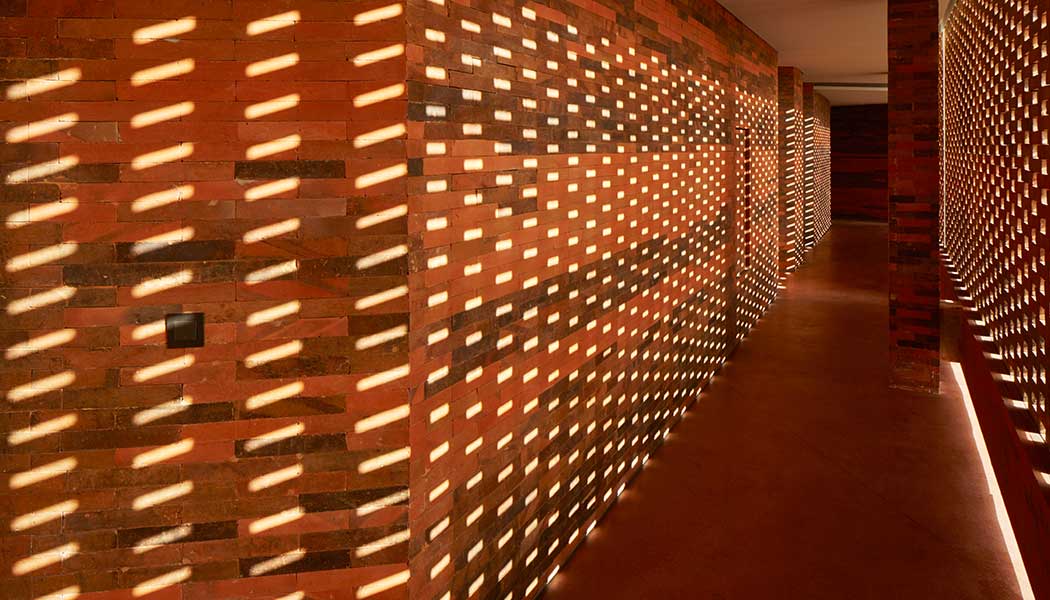 “When coming up with ideas for the new restaurant at Katamama, we looked at a plant-based menu but it was challenging for us at first. Then I realized that many of our national dishes are plant-based, we just never thought about it that way,” explains Wayan.

Together with Katamama’s Head Chef, Gregorius Arya, who has recently returned from five years in Dubai, and Chef Indra Ari Saputra, the team put their heads together to create an astonishing menu that is modern, beautifully presented and full of authentic flavours.

While skeptical at first that they could adapt their skills to create his new menu to meet the high expectations of Katamama’s discerning clientele, the team found themselves travelling down a road that became increasingly more interesting. 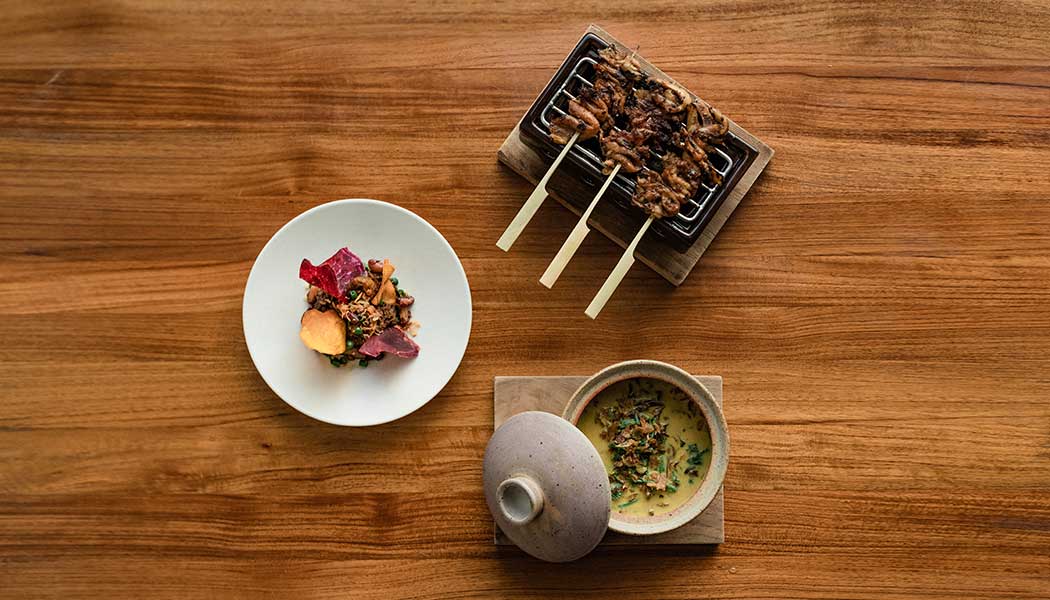 “At first, I just said no,” laughs Chef Indra, who is in charge of Research and Development for the culinary team that drives the entire group. It’s clear that he’s surprised himself, proudly joining the team that presented their first tasting menu.

The menu will offer over 20 dishes, each one honed by the skillful team. They have experimented and drawn on international inspiration for this menu. They all agree that creating a menu based completely on local and sustainable produce requires a far more creative approach than a traditional one.

“You have to make it look great, taste delicious, you have to make people happy and reinvent many of the traditional cooking methods that we have used before, “ explains Chef Wayan. 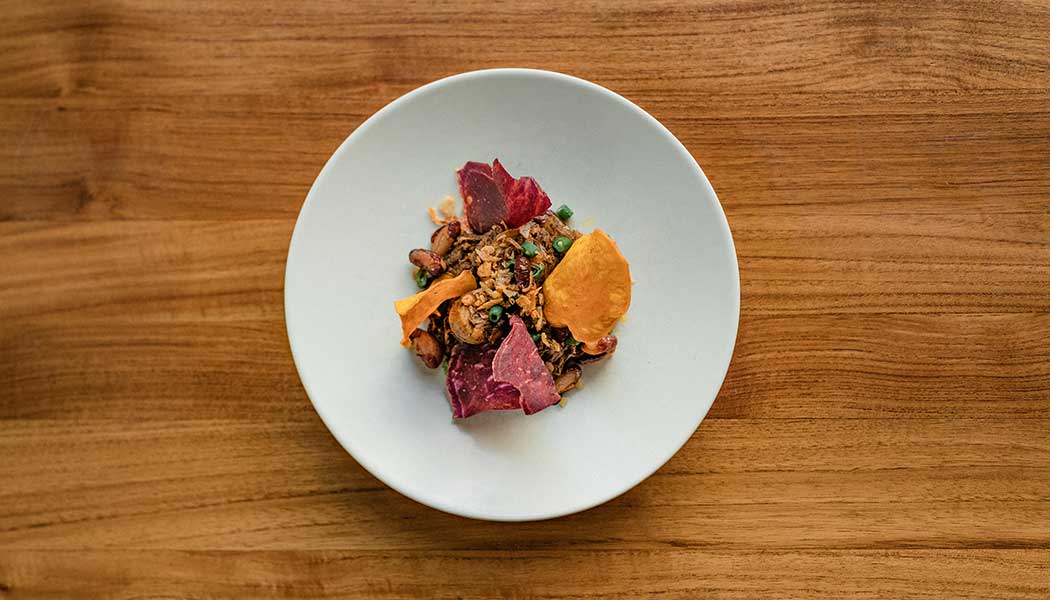 Being more of a burger and beer kind of girl, I approached this lunch with some trepidation, much the way the chefs probably did at the beginning of this journey. By combining an arsenal of cooking methods, spices, textures, colours and their combined experience, the menu was delicious and captivating all at the same time. Dish after perfect dish was beautifully prepared, perfectly spiced and seasoned and the various textures and bursts of colour were not only satisfying, they took me on an amazing culinary journey I won’t soon forget.

There is no doubt that the chefs are proud of what they have achieved here and rightfully so. It is a menu that will delight not just the converted but gourmets as well.

Our meal began with two starters. A traditional Bakcang Jengkol – a traditional Chinese-influenced dish of stuffed rice cakes wrapped in banana leaves. Instead of the traditional chicken or pork stuffing, this one uses a distinctive bitter bean, slow braised in a sauce created with soy, shallots, onions, ginger and candlenut spiced with nutmeg and cloves. It’s served with a side of crispy-spiced coconut. 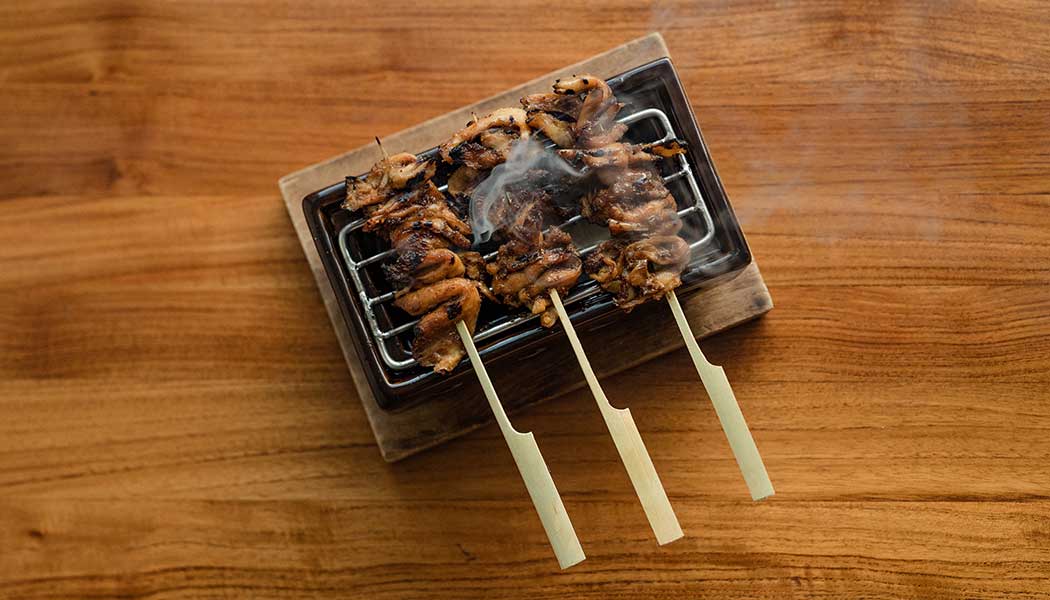 Also on the starter menu was Lumpia Basah; a fresh spring roll wrapped in home-made rice paper filled with fresh and sautéed vegetables and coconut, served with a home-made sweet and sour sauce, inspired by a West Javanese favourite.

We then moved on to a soup and satay course. An aromatic mushroom stew served in a creamy coconut broth was earthy and delicious. Once again we travelled to Java for inspiration from the classic Bubur Jamur Asap, with an added twist of smoked oyster mushroom. Alongside an elegant satay, Sate Terong, created with eggplant, served with a creamy curry sauce, inspired by the Balinese satay lilit.

The main event was an incredibly lush version of rendang, Rendang Bangka, made with jackfruit. The chefs explained that their version of the West Sumatran classic involves cooking the spice paste for 16 hours. Served with crispy red beans and vegetable crackers, it was an incredibly complex and beautiful dish. It was served together with a pandan flavoured rice freshened with parsley and daun siji, a leaf used in Indonesian cooking to achieve a beautiful shade of green. 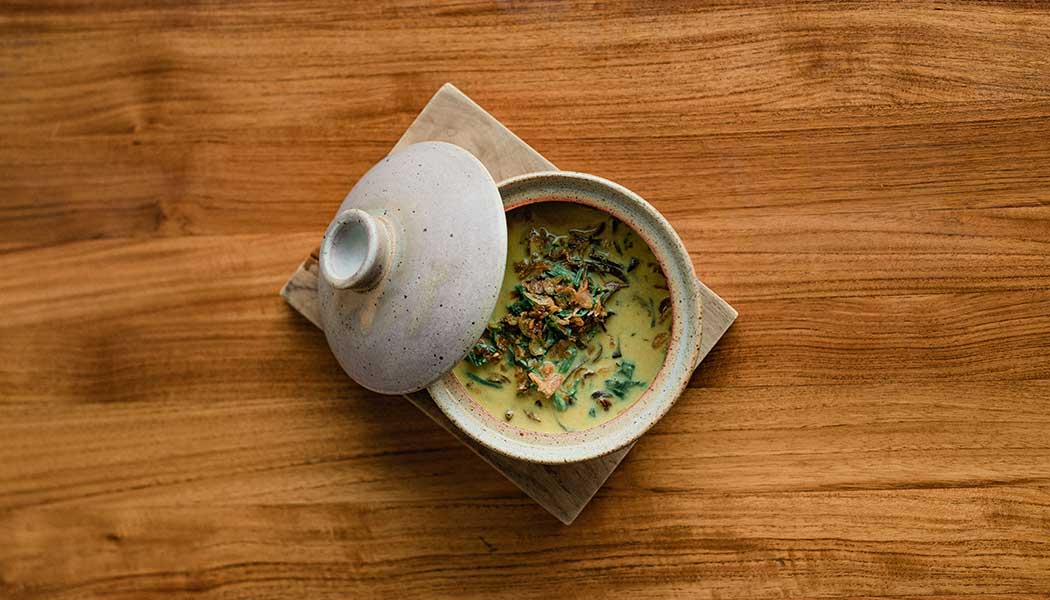 The relationship with famers that has been spearheaded by Chef Wayan is a vital part of this menu.

“I prefer to go direct to the farmers and work with them, it has benefits for each of us,” he explains.“ The farmers get a greater share of the income and we ensure there is a steady supply from a reliable source.”

The menu will also showcase traditional ingredients and methods with a range of innovative cocktails and health tonics.

Katamama Hotel, situated behind the iconic Beach Club, is a monument to modern design incorporating local materials. Created using over a million Balinese temple bricks, it has been recognized worldwide for its sustainable design principles. It is also an incredible monument to local design, arts and artisans. 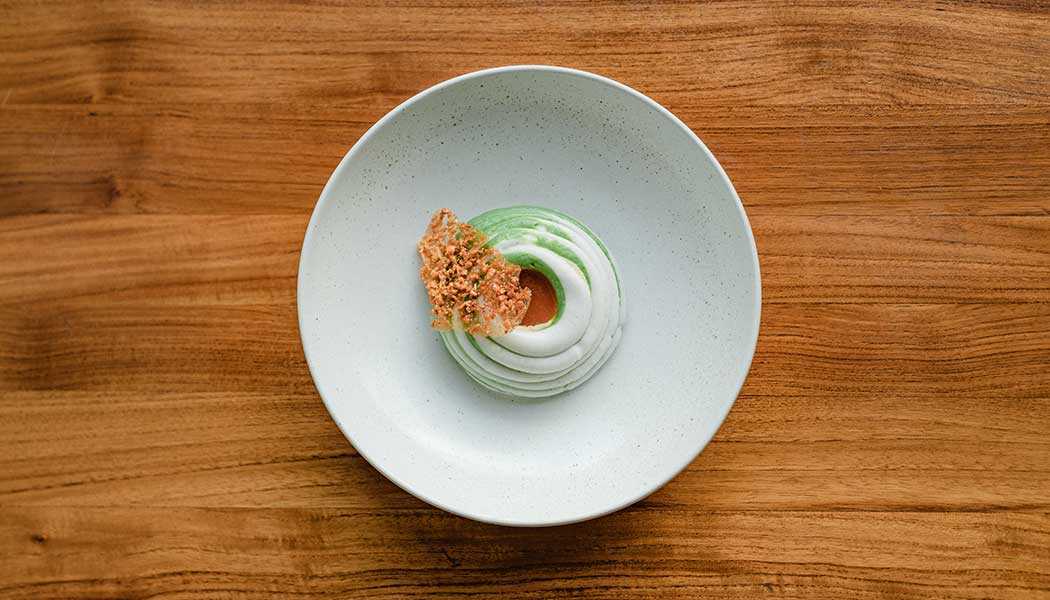 Beside it, a new addition to the family is almost complete: a new hotel overlooks the beach as part of the Creative Village that is now in the final stages of pre-opening. The new complex will be called collectively Desa Potato Head, a village that encompasses the two hotels, the extended Potato Head Beach Club, new dining spaces, a creative hub and design-driven open spaces dedicated to music and art that will be open to both guests and the public.

Modern, sustainable, Indonesian design has never had a better ambassador. The commitment to quality and innovation, and its connection to the rich history of Indonesia, puts Potato Head group at the forefront of Indonesian hospitality and Tanaman is yet another example of what can be achieved if you think local and dream big.

Six Of The Most Woke Restaurants On Bali