Unique and legendary, this little known island called Sumba boasts the spectacular Lelewatu Resort. A jewel not to be missed. 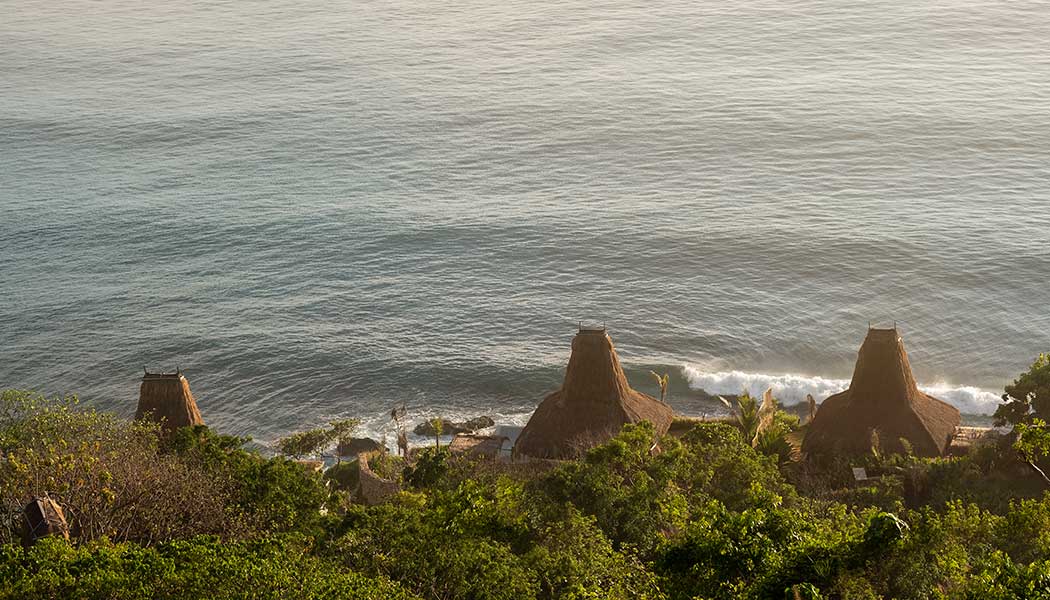 Sumba, the jewel in the crown of Indonesia – is what I hear. With over 17,000 islands and over 270 royals and sultans it’s a tall call, but one I have answered to no less than three times already. Why? Well, some experiences just shift quickly into the VIP lounge of one’s brain, to that inner memory bank, where outstanding, breathtaking and extraordinary are part of the furniture. I suppose it’s really a combination of small occurrences, each thrilling, surprising and impressive in their own right, that accumulate into that singular ‘wow’.

So where is the wow in Sumba?

Firstly, in their belief system. Forty percent of the population is Christian, with the remaining 60 percent being Marapu (Mar meaning grandfather and Apu meaning creator and source for life). It has animistic, spiritual and dynamic elements with a belief in balancing universal life and an eternal afterlife. Stone altars abound. Massive carved stone totems”and megalithic tombs lend the island that untouched, undiscovered and totally otherworldly feel and energy.

Linked to this is the annual Pasola ritual held by the western Sumbanese in celebration of the upcoming rice-planting season. This two-part event (there are four separate Pasolas in total, one in each of the different districts of West Sumba) starts pre-dawn, when everyone heads down to the sea in search of the Nyale worm, spawning in their millions, at a certain time of year on the south beaches of west Sumba. With buckets and buckets of worms caught, to eat fresh – raw or cooked – or be used as fishing bait, the second and rather violent part of the ritual is set to start. Spear throwing men on horseback. Sturdy horses known as Sandalwood ponies career across the open arena with rider astride, taking aim at another oncoming horseman. The aim? Bloodshed! The more blood spilled the better the rice harvest will be. The atmosphere is electric, the passion and just the sheer number of people at the main event is quite daunting. The memory? Unforgettable!

Sumba, which is about twice the size of Bali, is non-volcanic and, although generally quite dry, the short rainy season sees it convert into verdant rolling hills as far as the eye can see. It is this time of year that we have come for a short visit to enjoy the Nyale Festival, the Pasola and get all ‘megalithic’.

Lelewatu, a close neighbour of the globally famous Nihiwatu Resort, has recently flowered into being. Designed by the renowned architect of all things Indonesia Popo Danes, the resort is a befitting tribute to the culture and heritage of Sumba. Ten hectares of rain forest and cliff-front make up the expanse of this new overnight option based on one of the Lesser Sundas. Spacious rooms, private pool and butler service – and yes, of course, those pampered enough as we truly do come to expect this as a given. The unexpected however, and something I had never experienced to such a degree of constant enjoyment, was the view from my very own balcony. A view that I will covet for the rest of my life; a memory that jumped right into that VIP lounge in my brain. It was so easy to be present, to be in the now. The mind stopped wandering and incessantly chattering and seemed to engage with my eyes and the seer behind them. All three of us just looked out to sea. Mesmerising. Hours of gentle meditation, eyes wide open.

For those wishing for a few days of digital detox, Lelewatu is just perfect. The Resort team creates unique itineraries for each guest, suited to the number of days and interests.

Internally, there are two restaurants and a bar, an infinity pool, a spa villa and huge grounds to wander around – take a gentle stroll to see the famed Lelewatu stone bracelet, on property, after which the resort is named. (Watu means stone in Sumbanese whereas in Indonesian it is batu). In the spirit of keeping that mind entertained and away from all things digital, day trips and half-day outings can be arranged, with or without picnics. Visits to traditional megalithic villages, pristine beaches, saltwater lakes, surf spots and waterfalls are yours for the asking. Note that there are only approximately 715,000 people living on Sumba so expect little development, you will cross paths only very occasionally with any other travellers which is a definitely a godsend – for us it was anyway, coming from Bali at around six million people on an island half the size.

Lelewatu, as a massive nod to Sumba’s traditional housing, boasts three types of one bedroom villas, (cliff-hanger, royal honeymoon and the standard), two types of two-bedroom, a four-bedroom and the Uma Humba, an eight single-bed, open plan living space – which is akin to the typical communal, compound way of village living here on the island. The aforementioned villas are dotted throughout the property, along the paved walkways and buggy paths, built on a number of different levels. At the top of the cliff-side property and set back is the main arrival area and Le Humba restaurant, tastefully decorated with framed Sumba handicrafts and traditional metalwork, wooden pillars throughout. The second tier hosts the guest-only restaurant Bokosawu, the resort’s infinity pool, the sand-floored, grass-thatched bar and one of the most amazing sunset viewing spots in the world. The other is, of course, directly from my villa, just a couple of tiers further down, with an even more up close and personal encounter of this majestic Indian Ocean and her constant, hypnotic swell of waves.

For a fast-facts run down, all villas do in fact have flat-screen TVs (though why you would want one here escapes me). Room service is 24 hours; buggy service and housekeeping arrive promptly when called. Cooking with the chef, spa treatments, romantic private dinners are some in-resort activities. Handcrafted, ex-resort itineraries are tailor-made and chaperoned by charming, efficient guides, who are also a great source of ethnic tales and cultural legends.

Lelewatu Resort, cliff-side, over looking an uninterrupted view of the vast expanse of the Indian Ocean on the west coast of the island of Sumba (an hour’s flight east of Bali), molded a good part of this particular heady impression. Designed by renowned archipelagic architect Popo Danes, the resort “captures and curates the essence of Sumba”.

Read more about great places to stay in Sumba here.