Illustrator Stevie Gee works as a deep sea fisherman, longboards in Central London and learned his comedy from a one-eyed uncle – which is probably why his work is so funny.

STEVIE Gee, where are you from? Is that your real name?
My real name is Stevie Gee. I was born in Essex in 1980 but I currently call Muswell Hill, North London, my home. I live there with my wife, son, daughter and cat.

What do your parents do for a living?
They are retired now. My Dad was a gypsy jazz guitarist – he still is actually – and my Mum was a fortune-teller. My Dad is currently restoring his old motorbike and my mum is learning calligraphy.

How did you become an illustrator?
I got kicked out of the marines for being too hardcore. Drawing was my only other skill. 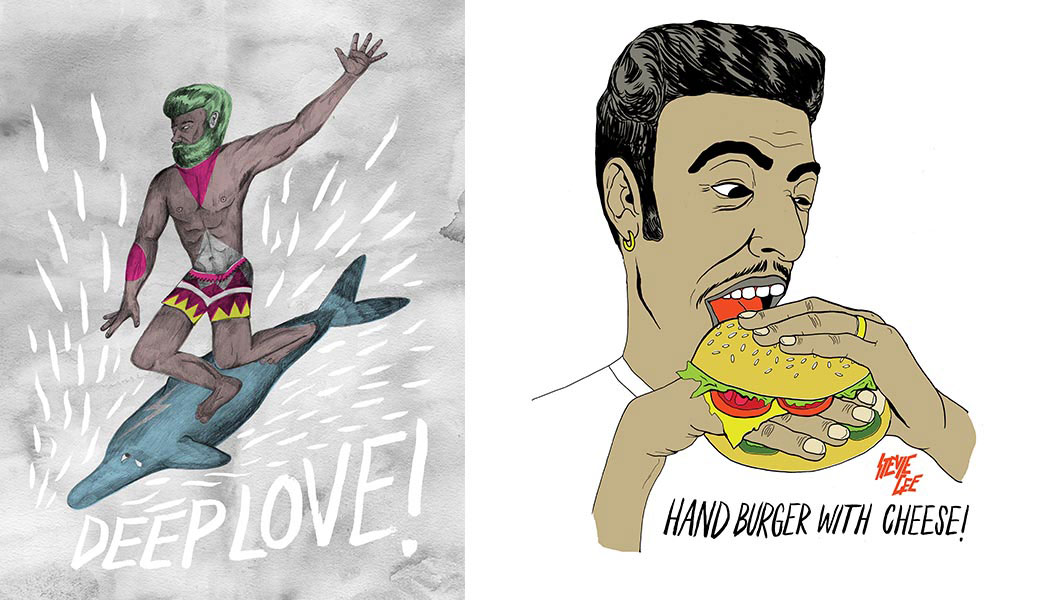 Who or what are your influences?
People who are doing what they want, enjoying it and doing it well. Popeye and “The Fonz” are my two of my all-time heroes. Then it would be Andrew Wellman, Sonic Youth, Mark Gonzales (the skateboarder) Raymond Pettibon (artist) Ernest Hemingway, Dennis Hopper, Ian Mackaye (Minor Threat/ Fugazi)…any man with a moustache, any man with a big quiff, ladies with big ass booties, rainbows, sunsets, clean waves and my wife and kids, to name but a few.

Who was your first client?
I think it was a surf lifestyle magazine called ADRENALIN. It was an editorial piece about the Hawaiian national anthem. It was a nice first piece. The bastards never paid though, which was annoying as I couldn’t pay the rent. I know who you are suckers…you best watch your back!

Which client helped you make your name?
All of them in different ways I guess. I have worked for some good bands, companies, friends and labels over the years. All of them are stepping stones to new adventures. Key ones for me would probably be Paul Smith, Nike, Beams Japan, Death Spray Custom, Penguin books and Deus Ex Machina. I think doing solo art shows has brought my work to the attention of a few of those clients, as that stuff often gets a lot of press globally. The agency I’m on, STEM in London, helped get my first solo show, “Vengeance is Coming” in 2009. After that I got a lot more work – the show got featured in a book. 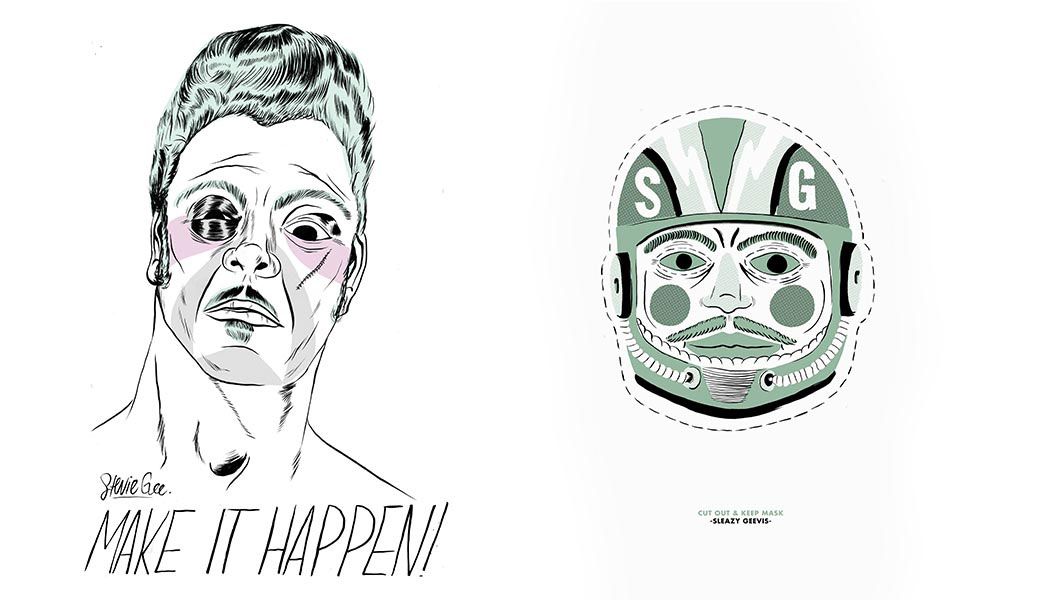 You spent some time here in Bali recently, what were your impressions of the place?
I was over for my art show “Deeds not Words” which was part of “Slidetober”, the Deus art, music and surf fest. I spent most of my time at Deus – Dustin’s place – and a few mornings at the beach. I couldn’t have had a better time. The Deus crew all made me feel so welcome and the show went really well. I survived an earthquake and caught a few waves. I think I could handle living in Bali for a while…everyone was lovely and it’s a beautiful place. I met lots of rad creative people who were all very kind to me. I did nothing to deserve such kindness, yet it was poured all over me day after day.

What advice do you have for any budding illustrators out there?
Don’t take yourself too seriously, you’re not saving lives you’re drawing pictures. Enjoy it. Have as much fun as you can, make cosmic love as much as your body can handle. Don’t listen to negative talk. Also, it’s really important to share everything you’ve got creatively: your ideas, your style, your pens, your desk, your body…there’s nothing new under the sun so help people out and never think you are better than anyone else.

There’s a humour to your work that’s offbeat…where’s that from?
My Uncle Jackie was a semi-professional boxer in the ’70s until he quite literally got one of his eyes knocked out and had to quit. Uncle Jackie was a classic fighter, he had an incredible right hook. After he lost his eye, he started doing stand up comedy. He used to do shows in workingmen’s clubs in East London. As a small child my dad would take me to watch him sometimes. Apparently, I’m a lot like him. 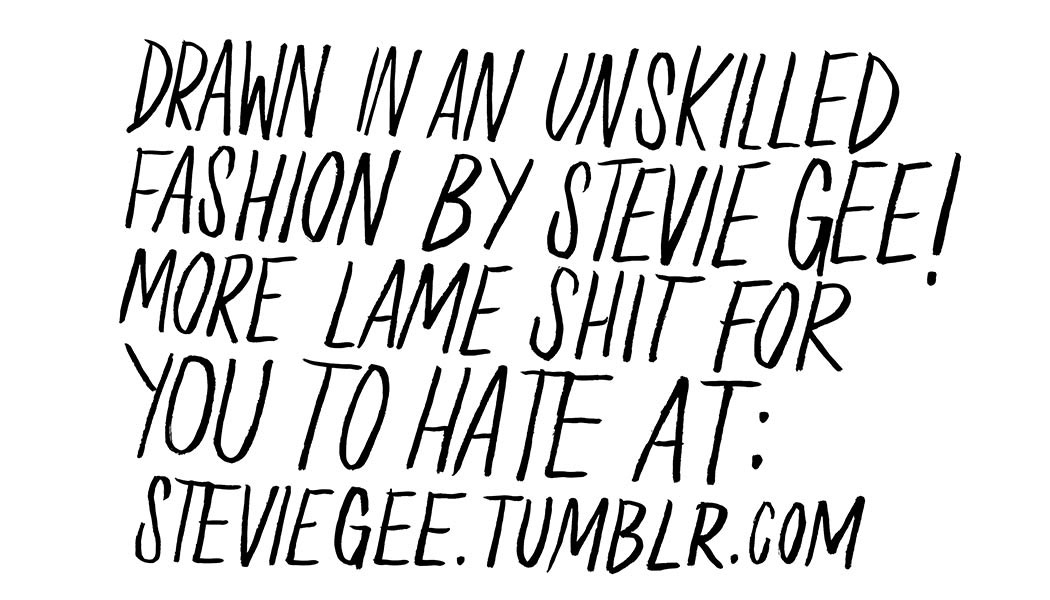 Do you consider yourself an underground artist?
I’m not really sure what that means but some of the stuff I do definitely appeals to people into alternative scenes. I reckon I have done too much paid work to claim that I’m an underground artist. As much as I enjoy working for free doing ‘zines, T’s and record covers for friends’ bands, I have to support a family these days, so it’s a mix of both.

When does illustration stop being that and start being art?
This is probably totally wrong, but how I see it would be: Illustration normally means you are producing a visual piece to communicate a message or story for someone who is paying you to do that. With art you can never be wrong, there’s no client feedback. You are doing exactly what you want without any influence from outside sources, clients or companies. I like both and I do both. 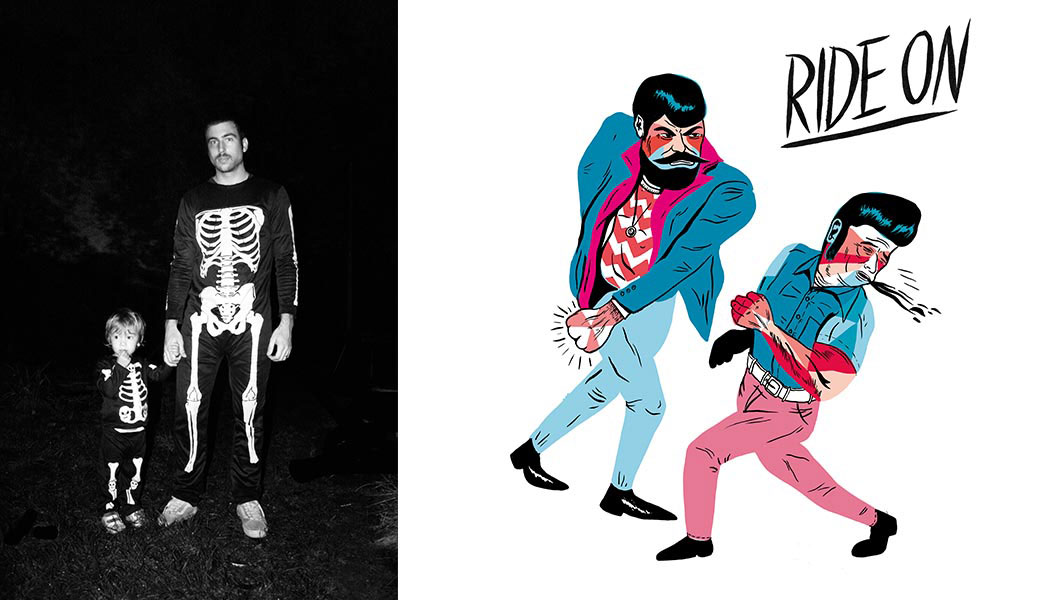 Do you have a studio at home or do you head out to work every day?
I have a small desk next to my bed which I work on at night and at weekends. I work a full time day job doing graphic design during the day in Central London. One day I would love to have a studio to work in. One day.

You work across many media…what’s your favourite?
My favourites so far have been the Ellis Ericson shaped surfboards I did for Deus in my last art show and the two fixed gear bikes I did for my first show with Death Spray Custom. 3D stuff seems more special than regular print work to me. Both of those examples were collaborations with people way more talented than me.

Your work doesn’t appear inherently ‘English’ to us, more of a West Coast American vibe there…why’s that do you think?
I don’t really know if that’s right but I do draw a lot of long-haired males with moustaches and ladies with curvaceous figures, kind of’70s-looking cats. I guess living in London I aspire to sunnier climates and endless long waves, that probably comes out in my drawings… Coming to Bali I saw my drawings come to life. 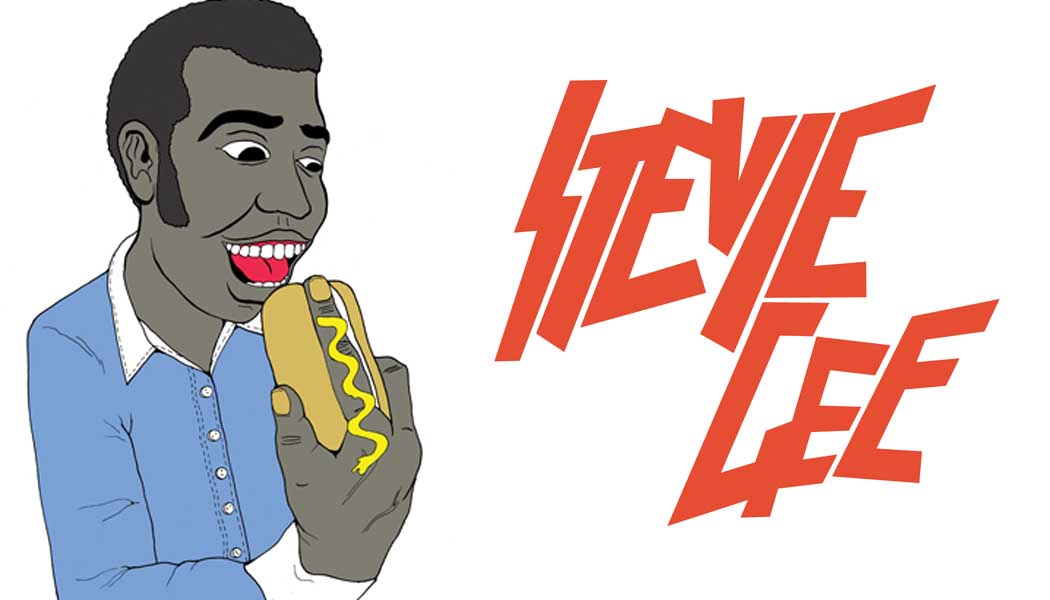 What’s the worst thing about what you do?
All of the fame, money and women that get thrown at me. It gets dull after a while, which is why I live a very modest life with my family in a tiny flat.

Hahaha…if you weren’t illustrating, what would you be doing?
I’d be a deep sea fisherman.

Stevie Gee, many thanks for your time.
The pleasure was all mine. Much love x.

theyakmagazine
•
Follow
Possibly even before the arrival of the Woolworth twins, Charlie Chaplin and Miguel Covarrubias to the shores of Bali, cocktails have been created and crafted, mixed, brewed and blended to include some of the tastes and flavors of this archipelago and beyond. Influenced by eras, music, countries and characters, The Yak went out in search of the ultimate Bali cocktail, from #Canggu to #Jimbaran through #Kuta to #NusaDua! Of course we didn’t find just the one – we found a few, and these are those! You can head to our website to see Yak's Top 11 Cocktails in Bali. Link in our bio! 🍹 . . #theyakmagazine #luxurylifestyle #bali #baliindonesia #baliisland #balihits #balilife #thebalibible #thebaliguideline #thebaliguru #thebalichili #balifoodies #baliculinary #balineseculinary #cocktails #cocktailsofinstagram #craftcocktails #classiccocktails #gincocktails #cocktailstogo #summercocktails #bestcocktails #cocktailstyle #signaturecocktails
View on Instagram |
3/9

theyakmagazine
•
Follow
Possibly even before the arrival of the Woolworth twins, Charlie Chaplin and Miguel Covarrubias to the shores of Bali, cocktails have been created and crafted, mixed, brewed and blended to include some of the tastes and flavors of this archipelago and beyond. Influenced by eras, music, countries and characters, The Yak went out in search of the ultimate Bali cocktail, from #Canggu to #Jimbaran through #Kuta to #NusaDua! Of course we didn’t find just the one – we found a few, and these are those! More cocktails will be coming soon on Part 2! Or you can head to our website to see Yak's Top 11 Cocktails in Bali. Link in our bio! 🍹 . . #theyakmagazine #luxurylifestyle #bali #baliindonesia #baliisland #balihits #balilife #thebalibible #thebaliguideline #thebaliguru #thebalichili #balifoodies #baliculinary #balineseculinary #cocktails #cocktailsofinstagram #craftcocktails #classiccocktails #gincocktails #cocktailstogo #summercocktails #bestcocktails #cocktailstyle #signaturecocktails
View on Instagram |
4/9

theyakmagazine
•
Follow
You might not possibly know that @chandibali was in fact the first roof top bar on Jl. Kayu Aya – many, many moons ago… A hotbed of cocktails and refreshing sounds, DJ’s and dancing. Currently, whilst not totally back to “normal”, Chandi did indeed open its doors back in December, offering Chandi-ites those fabulous Pan Asian flavours with a twist. Brasserie-style eating or relaxed fine dining – both descriptions are apt. Come ‘dressed up’ or just pop in for a bite to eat! 🤩🌴 Read more on MinYak July II 2022. Link in our bio. . . #theyakmagazine #chandi #chandirestaurant #seminyak #luxurylifestyle #bali #baliindonesia #baliisland #balihits #balilife #foodies #thebalibible #thebaliguideline #thebaliguru #thebalichili #restaurantbali #baligasm #foodporn #foodphotography #foodstagram #foodie #meatstagram #balifoodies #baliculinary #balineseculinary #petitenget
View on Instagram |
5/9

theyakmagazine
•
Follow
Welcome to The Yak's first New In The Hood IG series!! 🤩🏖️🌴 Come eat, meet or greet those who have just arrived, just opened or reopened their fabulous Bali doors! Swipe left to meet & greet your newest neighbors or help us by recommending some new venues in the comments below! 1. A wondrous hidden gem in Nusa Dua? Only you can decide, come down to Canna and see what all the fuss is about! For us it’s been an unparalleled day-to-night escape by the sea. Yes, it's @canna.bali who just opened this week! 🏖️ 2. A tranquil haven inspired by a Javanese-Hindu water palace! Wander through an ‘ancient' royal city by the sea, where every villa boasts luxurious modern interiors, a walled garden and a private swimming pool at @jumeirahbali ❤️ 3. A brand new 'Progressive Asian' eatery on Jl. Batubelig, Bali. Traditional cooking methods with modern flavours at @theariabali with a live rice-paddy view! 4. Who needs a pan or a stove when you have a perfect wood fire? Enjoy casual Argentinian dining like their traditional wood-fired asado @don.fernando.bali! 🔥 5. Looking for casual, Middle Eastern cuisine with East Mediterranean vibes? Ticking all those boxes is @sababa.bali! Our favorite dish? The Levantine Grilled meat best shared with your +1 ;) 6. Rossani Ferretti Salon is now in Bali (@rossanoferretti_bali_salon)! 😍 Exclusively at the new Healing Village Spa, Four Seasons Jimbaran Bay! 🤫 You should also check out DIOR first Indonesian pop-up store and concept cafe at Sundara Beach Club of @fsbali! 7. The most awaited @lostlindenberg is finally open in Pekutatan! Book now and lose yourself on a deserted black lava sand beach in a deep jungle of palm trees and sweet melancholic thoughts. Escape the mayhem and go get LOST! 8. Did you know that the biggest jungle pool club in Indonesia is in Ubud? Check out @kabanaubud to immerse yourself in the wonders of nature, music and cool vibes 🌴 (Part of the fabulous K Club Ubud - Grand opening 19t - 21st August!) 9. Last but not least! @arabica.indonesia will open their store in Beachwalk Kuta! "%Soft Cream Affogato” is a must-try to beat the heat from Kuta beach!☕
View on Instagram |
6/9