Step Into The Past’s Version Of The Future 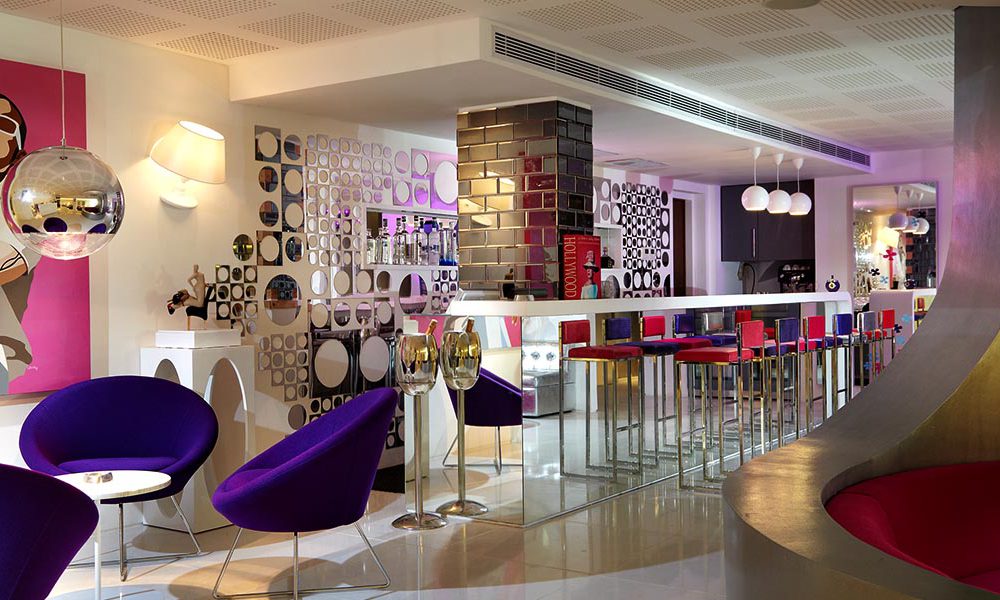 Chris Le marvels at the freewheeling spirit of Luna2 studiotel as the legendary Bali venue opens its doors to the public. 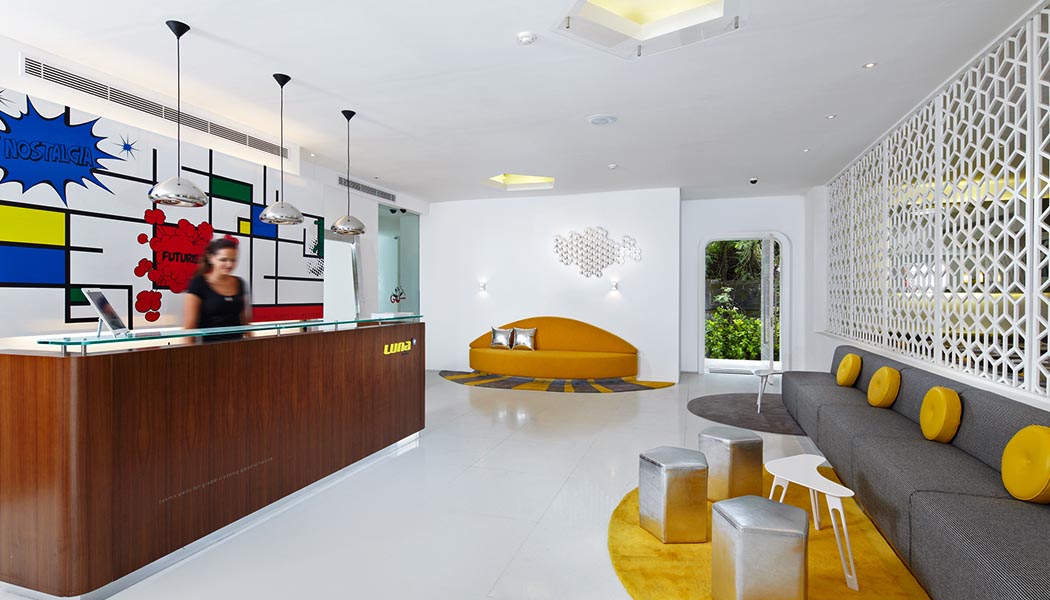 The early sixties, that special time of the century when the Western world was transitioning from the moralistic fifties to the freewheeling seventies. Things were blatantly optimistic, we were free to have casual relationships, free sex was just becoming a thing, vaccines had eradicated the worst diseases, and people were in charge of how and when they wanted to start a family. From their perspective, the future seemed bright and amazing. We were making leaps and bounds in technology in everything from household appliances to spacecraft, it probably was the most amazing time to be alive.

Luna2 studiotel essentially encapsulates this optimism in their brand and interiors. It isn’t quite how 2017 looks like, but is how you’d imagine someone from 1962 would imagine what 2017 would look like. Well, minus the flying cars, sky cities, colonies on the moon, and personalized jetpacks. The interiors are full of clean lines with overwhelmingly white, almost clinical motifs that scream retro futurism like a Verner Panton chair. Imagine the base coat to be the set of Barbarella with a white minimalistic touch and without the Bridget Fonda gyrating on a shag carpet. Now add in some cheeky fun bits that are quintessentially British and you essentially have Luna2’s design concept down pat.

All this nostalgic fun used to be reserved for those privileged with being able to call one of their 14 studio rooms home, albeit temporarily, and Luna2 club members. But times are changing and the retro futuristic fun can be enjoyed by anyone keen on a good time in the past’s version of the future. The little boutique hotel has opened its facilities to the public which is a giant ray of good news in these dark depressing Trump times. Because I for one, don’t want to live in 2017’s 2017, I want to live in 1962’s 2017.

So if you’re after an all out day enjoying Luna2’s newly public offerings, you should start with breakfast at their Orbit restaurant. Andy Warhol quite famously said “New York restaurants now have a new thing — they don’t sell their food, they sell their atmosphere. They say, ‘How dare you say we don’t have good food, when we never said we had good food. We have good atmosphere.’” Luckily for Luna2, they have an excellent breakfast selection. They do a Full English exceptionally well with all the trimmings one would expect in just about the prettiest presentation possible. The remarkable thing is the sheer unpretentiousness of it all, bacon, sausage, an appropriately sized tin of baked beans with a couple poached eggs and onion chutney on toast. So British. One standout is their French Toast, order it with extra bacon, trust us on this one. 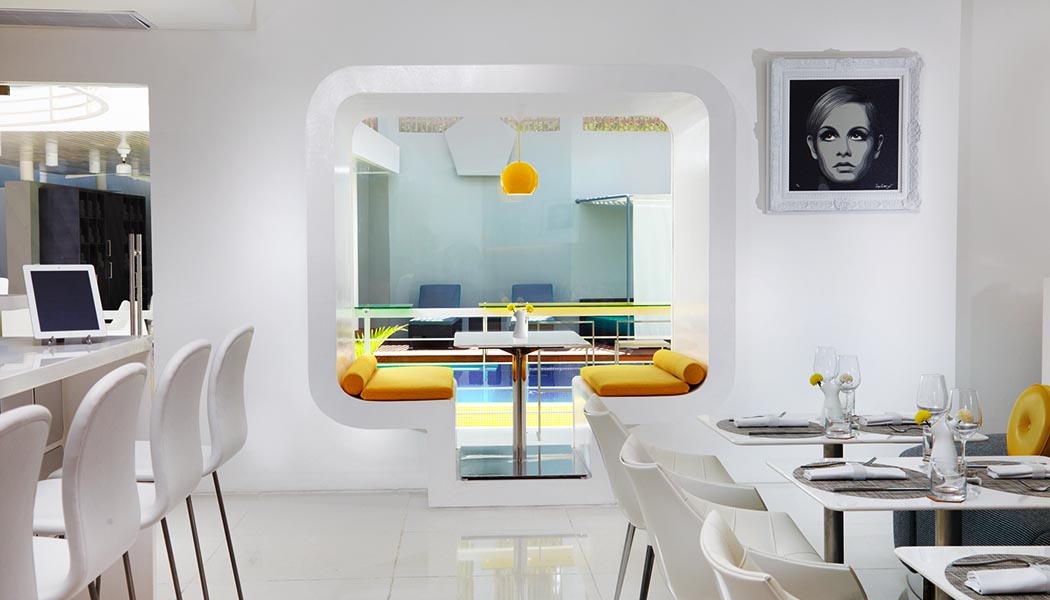 After enjoying breakfast and waiting the required 20 minutes for your food to digest, it’s time to hit Poolside. If you find yourself on the lighter end of this scene from 1969’s Butch Cassidy and the Sundance Kid, you’ll be happy to know that there are excellent lounging opportunities

Butch Cassidy: Then you jump first.

Sundance Kid: No, I said.

Butch Cassidy: What’s the matter with you?

Lounging at Poolside is just about as good as it gets, especially with what the government deems as natural phenomena washing up on the beach lately. What’s extra cool is that there’s a window in the pool to Pop! downstairs. If you’re extra nice to the staff, they might just let you in Pop! and you can pretend to be a spectator at the aquarium checking out strange monkey-like sea lions swimming about. I personally prefer to be the primate whale hybrid checking out the humans gawking at the window, it really puts the whole world in perspective, well, maybe more the world of a semi-intelligent aquatic mammal at an aquarium.  Whatever roles you prefer playing, it’s Instagram gold and remember you saw it here first before it blows up and becomes another swing in the middle of the sea thing. There’s a pretty descent lunch time menu available as well as a full list of cocktails so that you can be rewarded for doing all those underwater tricks those strange humans want you to do. 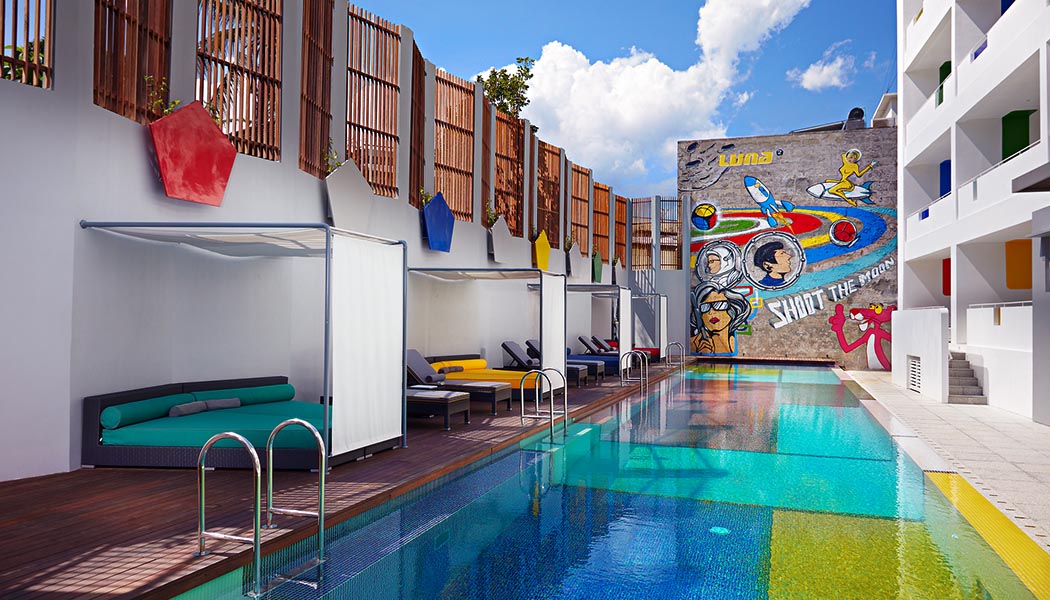 Ideally, it’s about time for the sun to dip under the horizon by now (at least for the purposes of this article), and you want to check out an amazing Bali sunset. Just pop up into Space Rooftop Bar a convenient elevator ride away. It boasts amazing panoramas of the island and there isn’t much as tall as it in the generally vicinity. You can watch a commanding view of the Indian ocean or stare as the sun baths the sky behind in brilliantly pink light. All while enjoying oysters, canapés, and again, an amazing cocktail selection. If wine is your thing, check out their wine selection or go a step further and check out their actual wine cellar, it won Wine Spectator’s Award of Excellence four years in a row. I personally like to drink wine, but I guess being a spectator is cool too. John Glenn once said “I don’t know what you could say about a day in which you have seen four beautiful sunsets.” He was in a different space, but if I could do four sunsets in Space at Luna2 , I’d have to say that my quality of life had significantly improved. 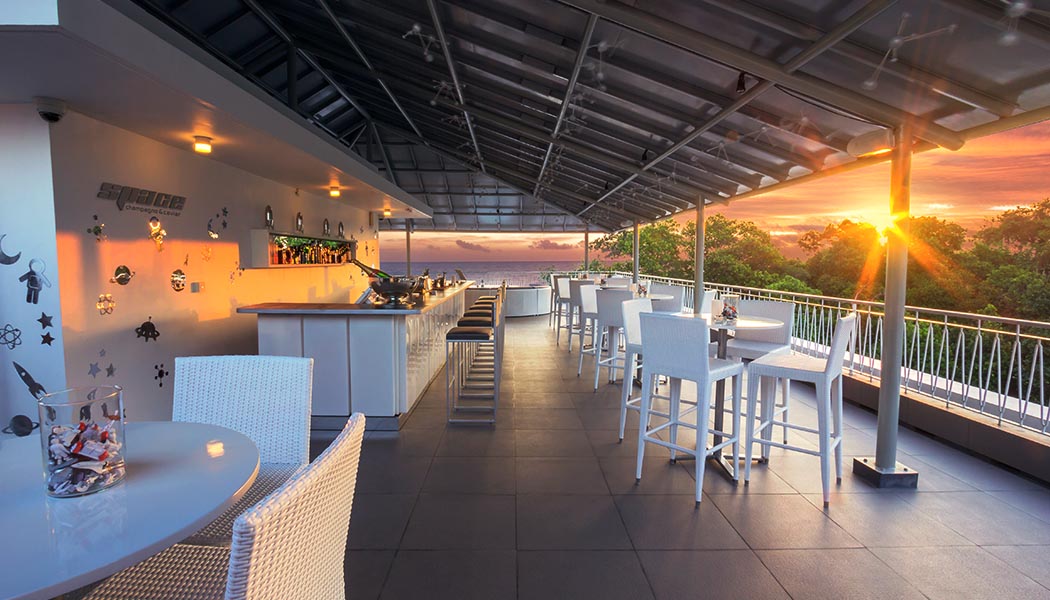 Ok, it’s getting dark so naturally it’s time to eat something substantial. According to John Cleese, “the English contribution to world cuisine [is] the chip.” Despite the Britishness of Luna2, they thankfully have an actual menu full of deliciousness which they describe as “based on European classic cuisine with an innovative twist.” They also offer these amazing private dining packages where their head chef Alanna will tailor something specifically for you and a significant other, a group of friends or just you and yourself if that’s how you like to roll. They don’t judge. Just give them a couple days heads up so that they can sit down with you and bounce around ideas on how to truly customize your experience. After that day at the pool, I would try to make it aquarium-themed, where mackerel and sardines, can accompany lobster and caviar for a feast fit for the classiest of pinnipeds. For a more terrestrial experience, they also serve a grilled bistro-style grass-fed Nebraskan prime rib eye which is dry aged in-house for about 20 days. It’s on their standard dinner menu and pulls apart in the most satisfying way. Another strong item on their menu is their Crab on Toast, fresh crab flesh is expertly extracted and placed between homemade bread. The result is a cool, zesty dish perfect for almost any time of the day. 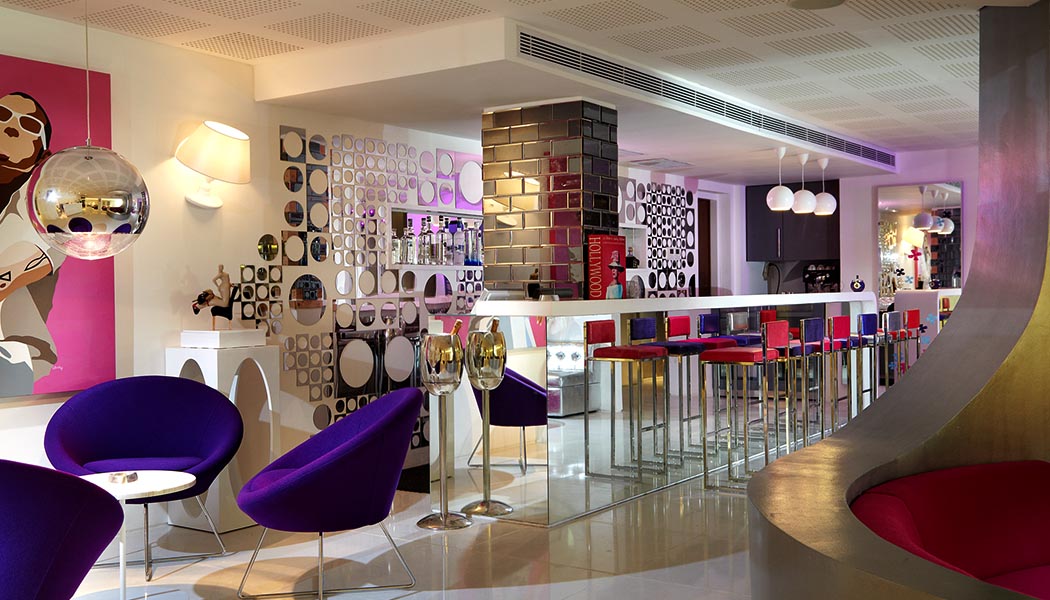 After you’re done with dinner, its generally movie time. Alfred Hitchcock said “always make the audience suffer as much as possible.” Luna2 did not get the memo. Lunaplex is just about as comfortable as it gets. They have 16 recliners in two neat little rows facing a respectably large screen where you are cocooned by seven speakers of sheer bass. They serve you food, drinks, and wine from their award winning wine cellar. One of the coolest things about Lunaplex is that you can hire it for private screenings, with a movie of your choice. Missed that Oscar-nominated sci-fi epic at the theaters because it had a ridiculously short theater run to make room for Fast and the Furious 17’s six week run (yes, I’m talking about Arrival, yes I saw it at Lunaplex, yes it was epic)? Well worry no more, Lunaplex has your back. 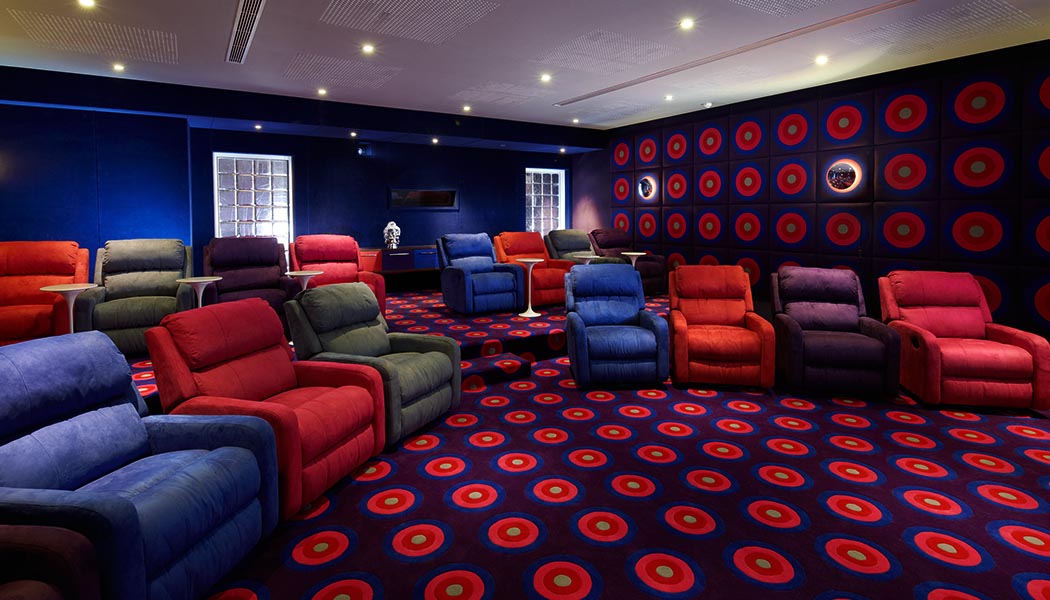 Then there’s Pop!, their underground club with the window into the pool. They have parties there once in a blue moon that are themed like Purple Rain, Studio 54, Pink Panther, you get the idea. Twiggy said “want to continue to try and break the barrier between male and female? If you want to do that, that’s fine. At our shows, it’s like a Halloween party, which isn’t a bad thing. I’d like to see more of it actually.” Well, if 1960s Twiggy was around at a Pop! party, well, I guess she would just think people were dressed like normal. Normal for the 60s. As for blurring those gender lines, they have a stripper pole at Luna2 and to be honest, I think we’ve seen just as many men hit it as women. It’s that kind of a party, where people like to get loose. If there isn’t a party happening there, you can always pull yourself up by your bootstraps and make a party there because it’s totally available for private events.

Luna2 celebrates that joyful optimism the 60s once had. Their ethos is “respect the past, welcome the future and have fun in the process.” What could be a better message in these gloomy somewhat pessimistic times? Sure we have a little device in our pocket that is somehow connected to all the world’s information, but the 60s had a certain feeling that humanity had bigger and greater things just around the corner and that it was finally okay to break from societal norms and be whoever it is that you want to be. Luna2 encapsulates that feeling, and has fun at the same time. 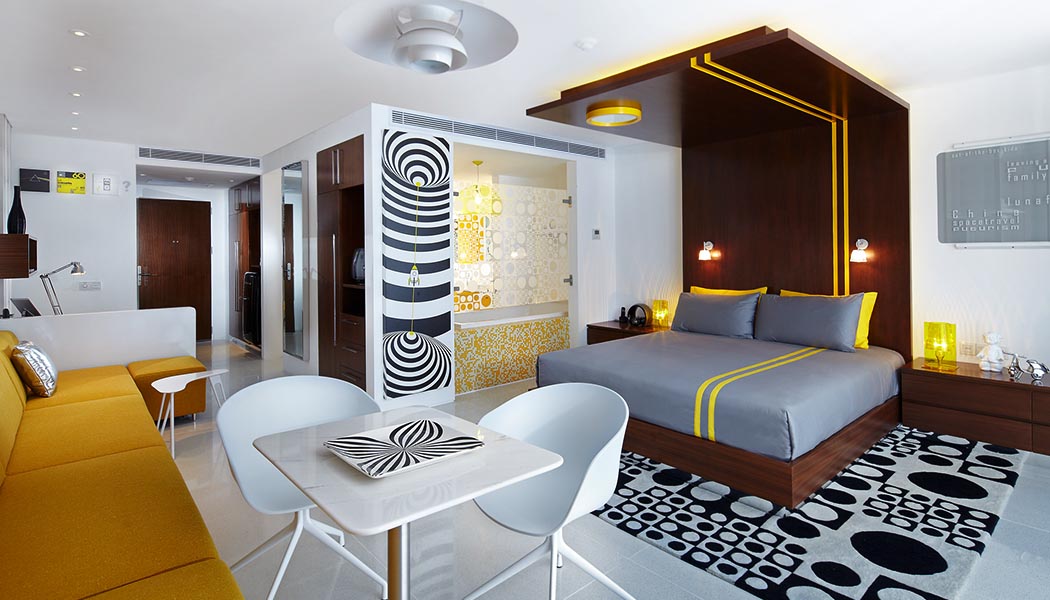 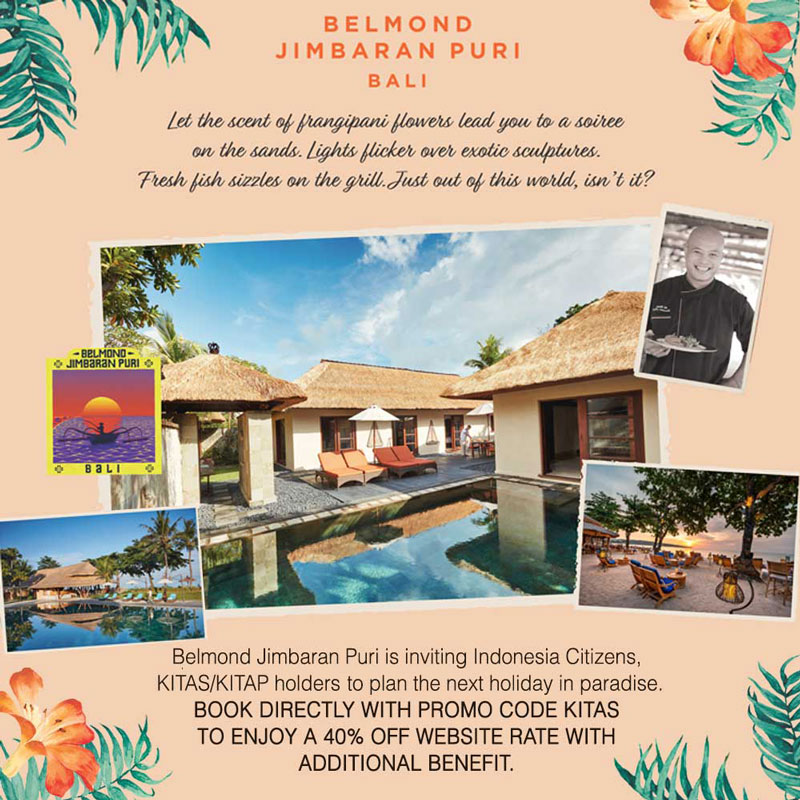