Most of us dream of changing the world, but so few of us are set up to make lasting global change. Often it’s money that holds us back, other times it’s a sense of insignificance in the grander scheme of things. But every once in a while someone will emerge with many of the boxes ticked – and they rise to the occasion.

Sam Branson, son of the famous entrepreneur and now philanthropist Richard Branson, moved to Bali in 2018 to pursue his passions. “We came out here to spend quality time as a family,” he said [he is married to the actress Isabella Calthrope]. “We wanted to create a space for peace, a place to grow and to learn. I have never been anywhere with such a strong sense of community and present living. It’s liberating and inspiring.”

Sam’s move to Bali coincided with a shift in his focus towards wellbeing, spirituality, and an up-and-coming music career. “We came initially for a two-week holiday and a yoga retreat,” he said, “and we ended up staying five months. In the end we kept extending our stay, as we felt this place gave us so many of the things we were looking for. Ubud is unlike any place in the world. It’s a city that grows out of an ancient jungle; it’s bohemian, has incredible food, yoga, meditation and arts.”

To date, Sam Branson has been involved in a variety of worlds, many based around the idea of change. Education has been a running theme. In 2010 he founded Big Change along with six friends including sister Holly and Princess Beatrice. The charity connects and supports organisations that help to create positive change for young people.

“Big Change collaborates with a bunch of organizations on a campaign called Reimagining Education,” Sam says. “We held a summit last year where we brought in leading thinkers on education. We are doing a ton of research but our main takeaway is that until we remove standardized testing, we will never change the system.”

His involvement was partly motivated by his own experience. He didn’t thrive in a traditional learning environment, and didn’t believe in his own abilities until discovering his own passions later in life. This in turn gave him empathy towards those that are not having their potential unlocked in traditional education.

“Passion is where you find that effort is effortless because you find inspiration,” he says. But the modern western mindset he says often pushes people to self-actualize through future events. “If I get these grades, if I attend that university, or once I get this job then I will be fulfilled. Most people will follow that carrot throughout their lives. We need to create a system wherein we honor and respect where young people are at in their lives, and give them the license to find themselves.”

Awareness and climate change have been another running theme. When he was 23, he embarked on a three-month arctic dogsled, which he describes as life changing. “It was so brutal, but amazing,” he said. “Especially at that stage in my life. I was a young man, soul-searching on this internal and external journey. It really solidified my passion for the climate and the world.”

Sam also grew up loving documentaries. “I educated myself through them,” he explained. “I had this love for documentaries and a growing passion for the world, so I wanted to create a company that specifically created films that inspired and educated people but didn’t just preach to the converted.” The result was Sundog Pictures, with a remit to produce quality factual content that starts conversations about the world around us.

And then there’s the music, unsurprisingly perhaps given his father’s background with Virgin. “It was always something I wanted to pursue,’ he said, “but it’s not uncommon to be afraid of doing that which you love the most. I guess part of my reluctance was because of my father’s history in the industry, but in the end I knew that if I didn’t pursue this it would be a source of deep regret.”

Richard Branson’s success no doubt casts a long shadow. Many people with successful parents often feel suffocated by powerful legacies, often remembered as the child of that person. Sam speaks fondly of his father, and has carved his own way in life in such a way that comparisons would be unjustified. “We are really close,” he says, “like best mates. Luckily my family is really tight. We have a place in the Caribbean which we go to every year for a few months.” 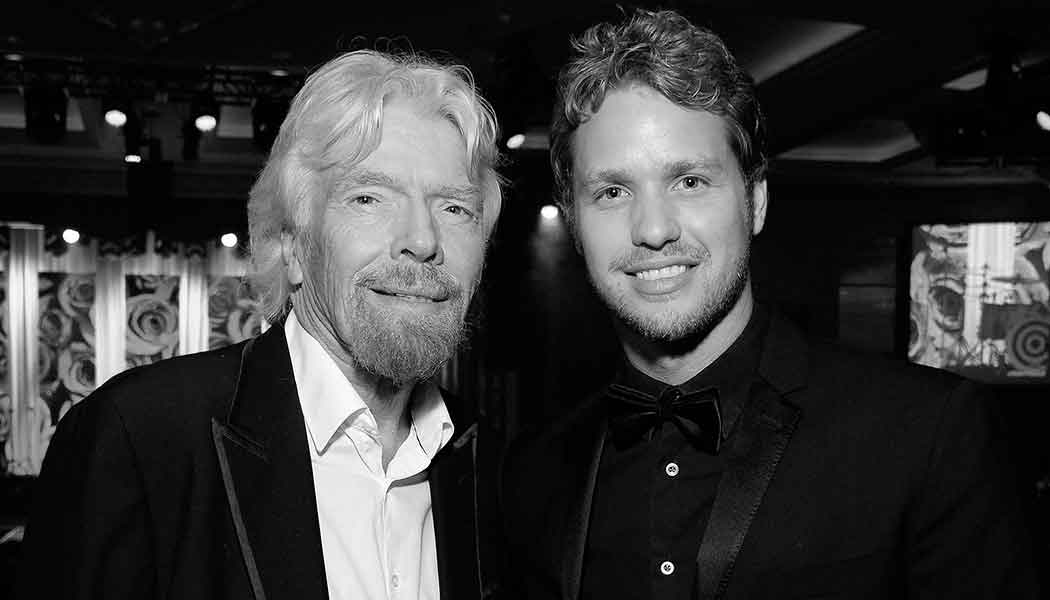 It’s a space that has allowed his family to spend quality time together, away from prying eyes and exhaustive public appearances. “It wasn’t so much fatherly advice as it was being a great role model that influenced me the most,” Sam explained. “He has got such an amazing enthusiasm for life and puts people above anything. To him a business is just a name and it’s the people working in it that matter. Making money is just a byproduct of creating amazing things and that is a wonderful way to live. Who he is as a person rubbed off on my approach to life.”

It’s an approach that hasn’t always worked. “I went through quite a difficult journey in the past few years,” Sam explained. “I was running my production company, doing the Strive Challenge to raise money for Big Change, was doing a public speaking tour, and on the surface it all seemed great. But one day I hit a point where I was on stage giving a talk I had done a million times before and just froze. I thought to myself, I have nothing more to say and walked off stage. What I was doing was trying to be all things to all people without being someone for myself. Because I was deeply passionate about the world and had the opportunity, I spread myself too thin. I wasn’t living in sustainability with myself.”

So music it is, for now, that inspires and centres him. His baby is Love Mafia, which aims to become an artist collective, although he is certainly at the core of it. “I am very narrative-driven,” he says, “and the music I make always tells a story. Our aim is to build a brand that really celebrates collaboration and diversity because in my experience, the only way to create empathy and compassion for other human beings is by understanding their story,” he says.

“The problem is that people retreat further into their own confirmation biases, which further feeds the divide. Underneath all that bullshit we all share the same feelings: fear, love, hate, compassion. We are all unified over these common experiences of emotion … and I am all for common stories in music, art, and creativity that bridges that divide.”

Did you love this people profile? Read about other great people who live in Bali here.