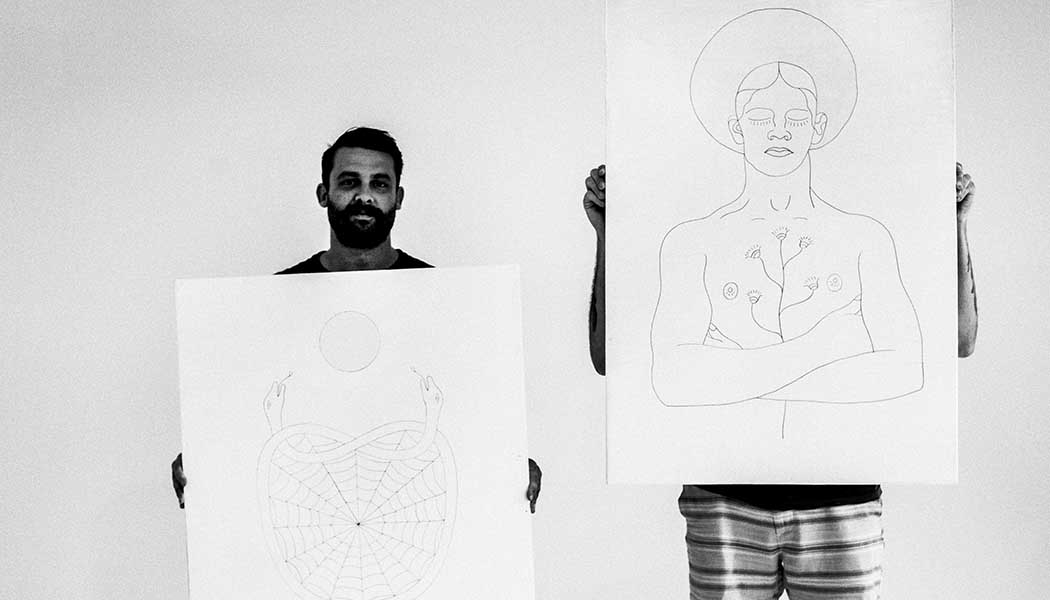 Anthony McInerheney gets into the heads of a Texan pair with a disproportionate effect on Bali’s contemporary cultural and creative design. Portrait by Anthony Dodds.

THE road stretched away in front of them. The nondescript Toyota Corolla careening along with three occupants. Renée Fernandez, Ryan’s girlfriend, is at the wheel, she’s the only one paying attention to Highway 35, and even then it’s really only half. She’s following the conversation of the other two, Caleb Owen Everitt and Ryan Rhodes. They had started to talk out loud about notions both had secretly harboured. The border where design and art meet. How it’s possible to have one and retain the other and, the big one, the idea that these two might work with one another. 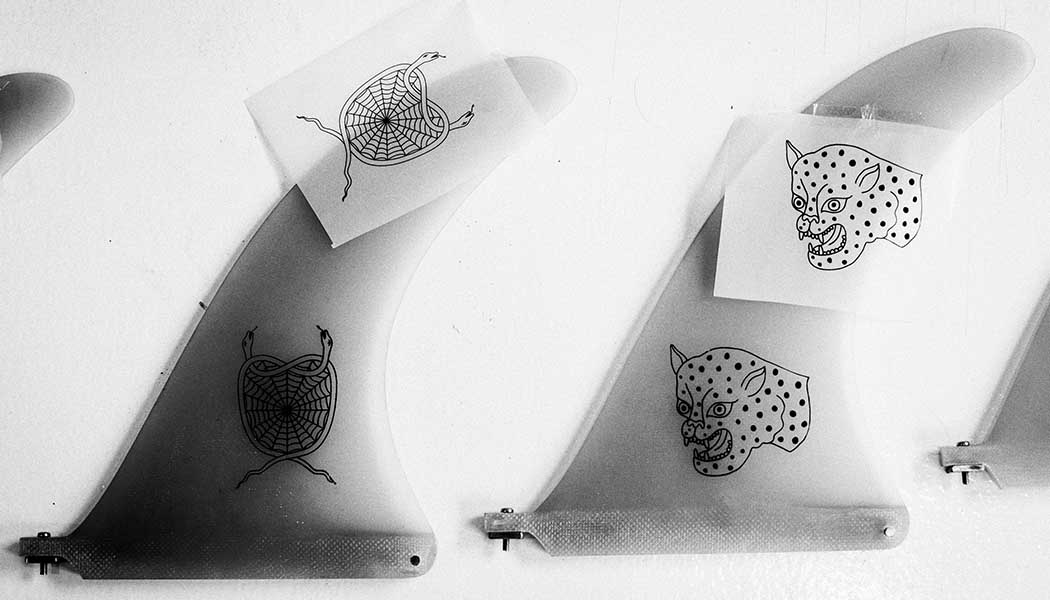 Once the idea was out, they liked it. Brand new, shiny, and the potential to be both fulfilling and thrilling. That 40-odd minute ride about three years back when they had that conversation on a Texan road heading back to their old Alma Mater, Texas State University, to attend the graduate show, to lend their support to the next wave. 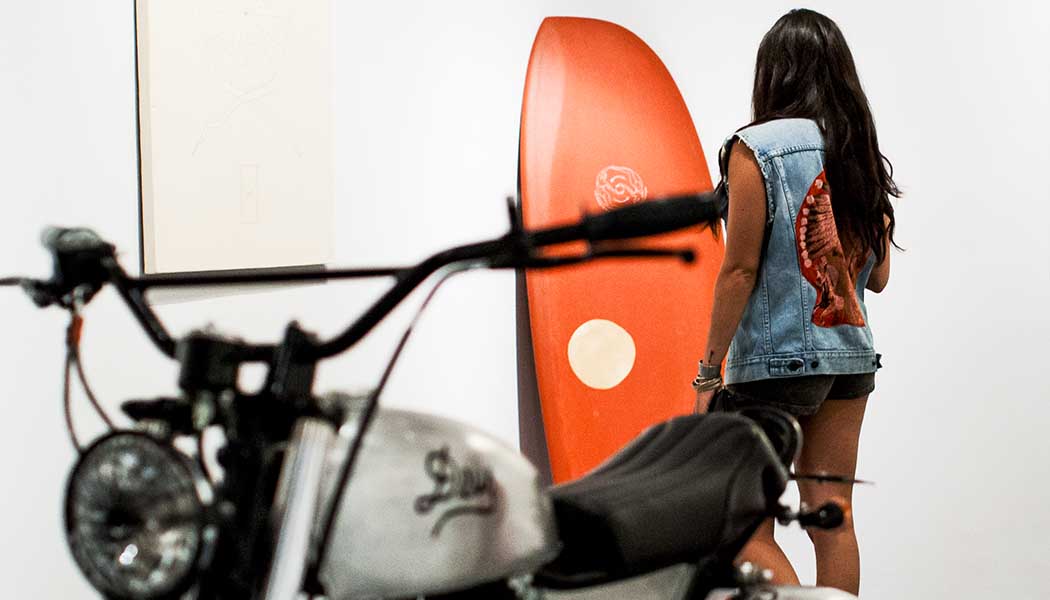 Now we know them as one of the most interesting design/art teams around. They work for über-hip companies and individuals that share their aesthetic – a clutch of motorcycle brands, a bicycle company, skateboards and lots of clothing lines like Van’s, Monster Children, Patagonia, Poler, and Deus ex Machina. What’s interesting is the slew of smaller jobs for friends, or as they call them, buddies – Johnson’s Backyard Garden, Folk Fiber, Flat Track Coffee, and my personal favourite, Easy Tiger Bake Shop and Beer Garden. It’s this sense of social that permeates what they do that’s piqued my interest. They tell me that with each job they try to rebuild themselves, ?try new shit”, as they put it. 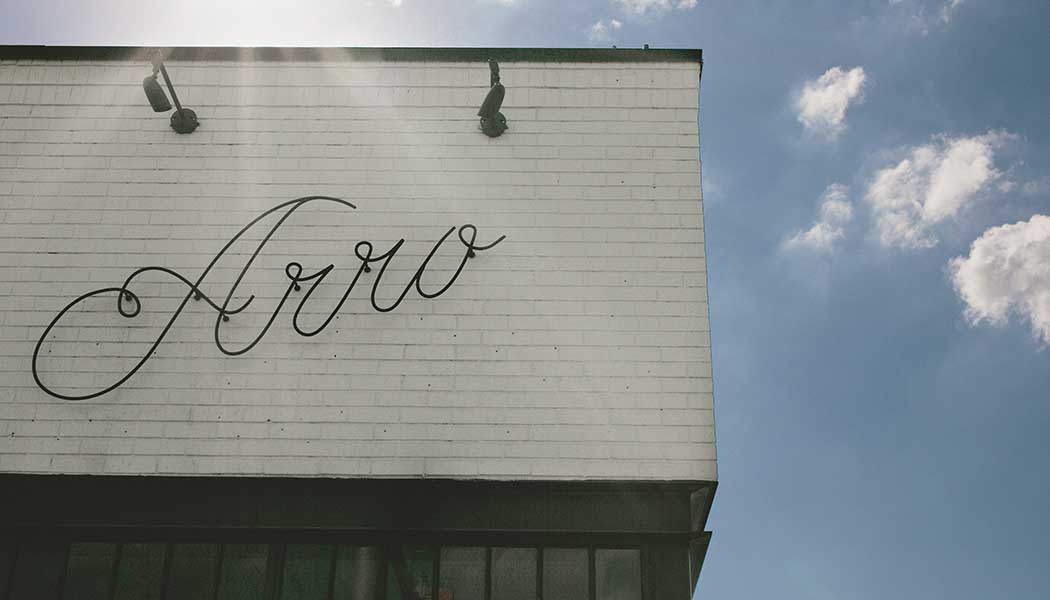 They both grew up in Texas, both went to the same Uni, though in different years. Their paths first crossed while Ryan was a senior designer for an ad agency – Caleb did his internship there and they sat side by side. I suppose that must have been the beginning of the conversation. 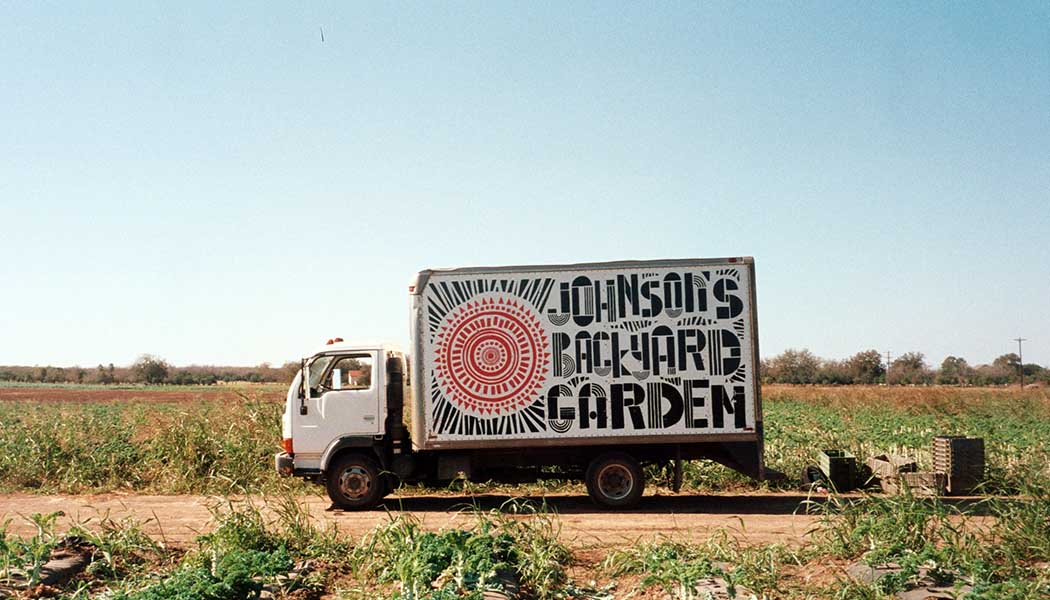 Subsequently Caleb graduated and headed off to the big smoke, New York. After working there for a few years he moved to Portland to take up an artistic director position. Then just over three years back, he chucked it all in and moved to Austin. He had two intentions. One was definitely starting up his own shop. The other was to restart the conversation with Ryan.

Ryan hadn’t stagnated. He moved onward and upward through senior positions in agencies – one job taking him for a stint in San Francisco – but he, too, returned to his native Austin. 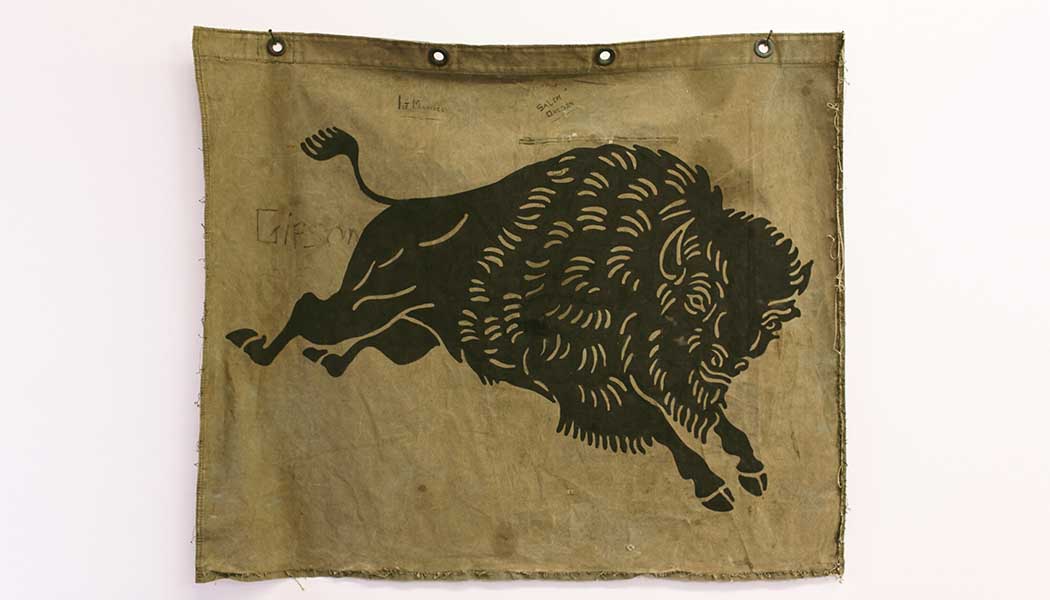 Ryan reflected that in starting Land with Caleb he had to abandon everything he had done previously in his professional life. Just walk away from it, simply because he didn’t want to do that again. Damn that’s hard, cathartic definitely, but brave … to walk away from all those years. 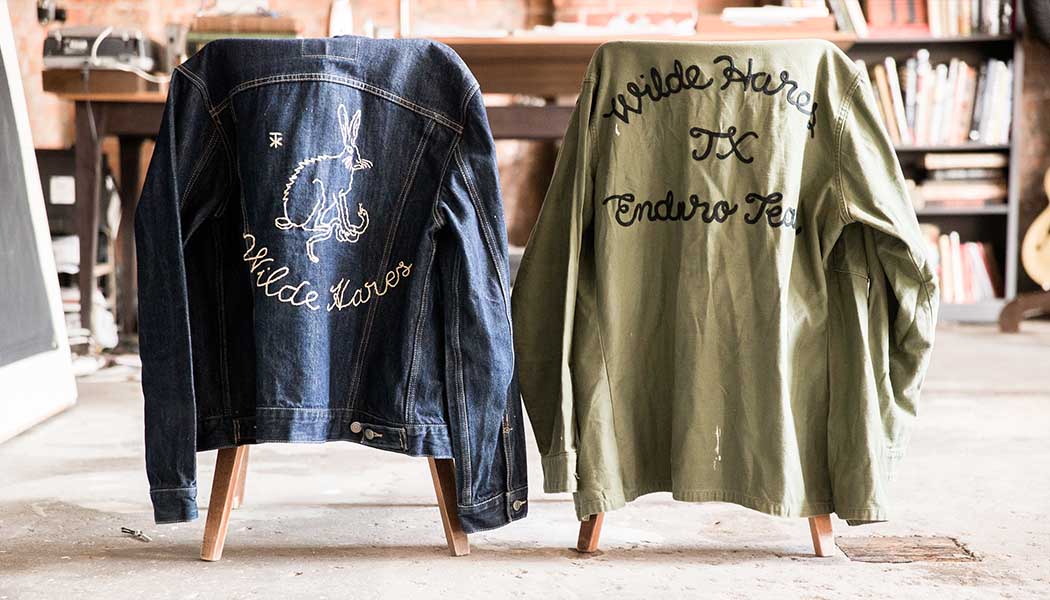 When they met up again they’d already developed their likes, dislikes. Both had strong work ethos. Both had used their time to learn to articulate what they thought and wanted. Both had decided that, above all, you must remain true to yourself. Both agreed that having a good time while you did anything was imperative. 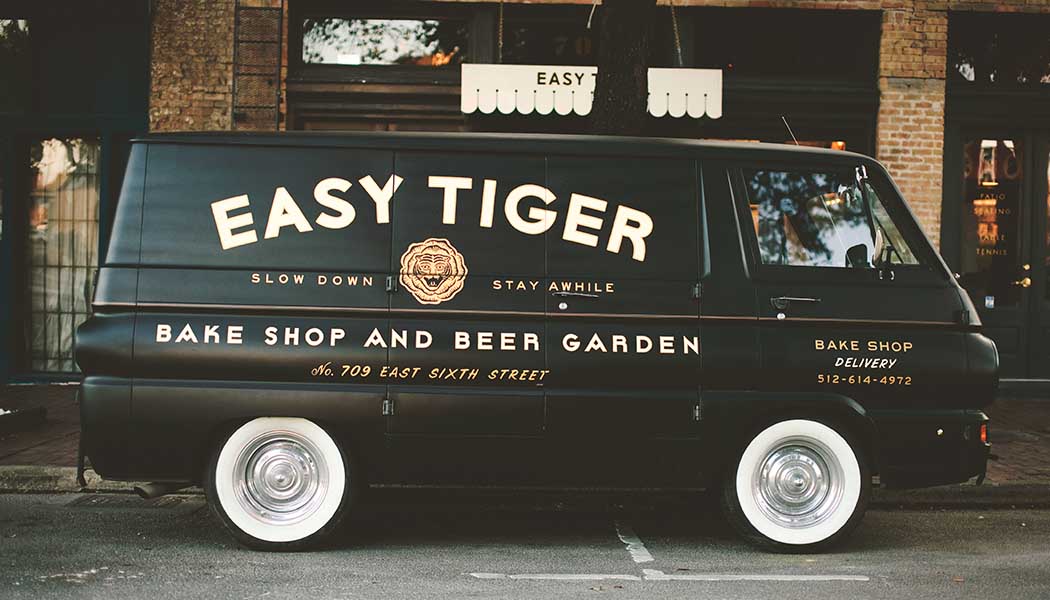 The magic thing about them is that they seem genuinely egoless toward each other. Who does what and when seems to change. One takes the lead on this, the other that. Roles swap and ideas flow. Critique is given, taken and applied. They tell me of a time of working out each other’s ebb and flow, now they have each other’s meter. 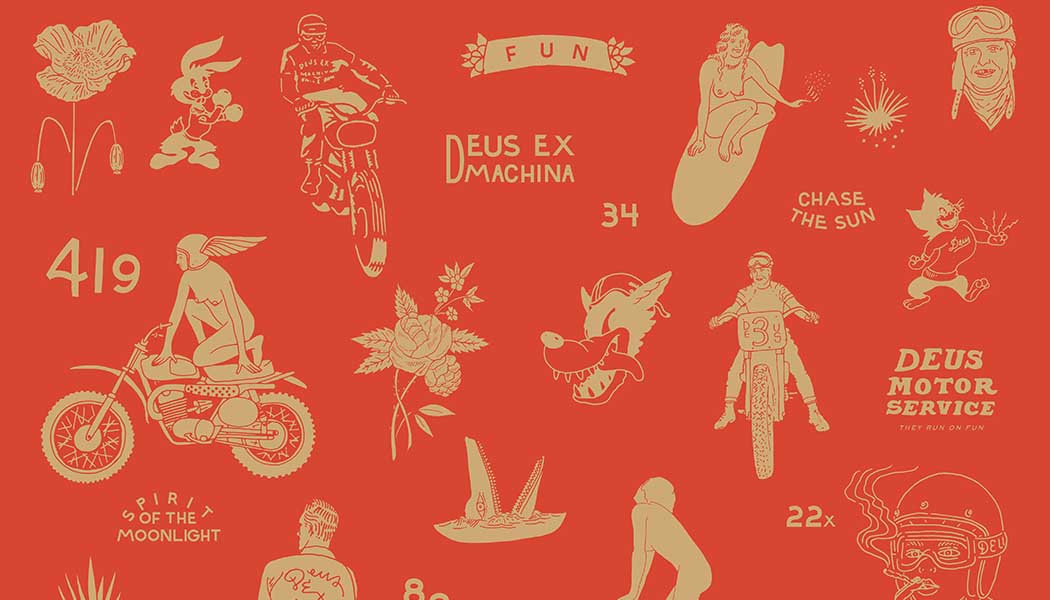 Land’s first job was for Van’s and wasn’t all that collaborative. Each had worked more or less independently from home. Back then they didn’t have a physical place to go. This made them acutely aware of the need to have an abode where both could work. A place they both felt comfortable in. Creative. So they set about starting up their own shop. They were convinced that they needed to short-circuit the process, a place where they could constantly show each other their bits and bobs. Doodles and diagrams … a place where they could continue their conversation. 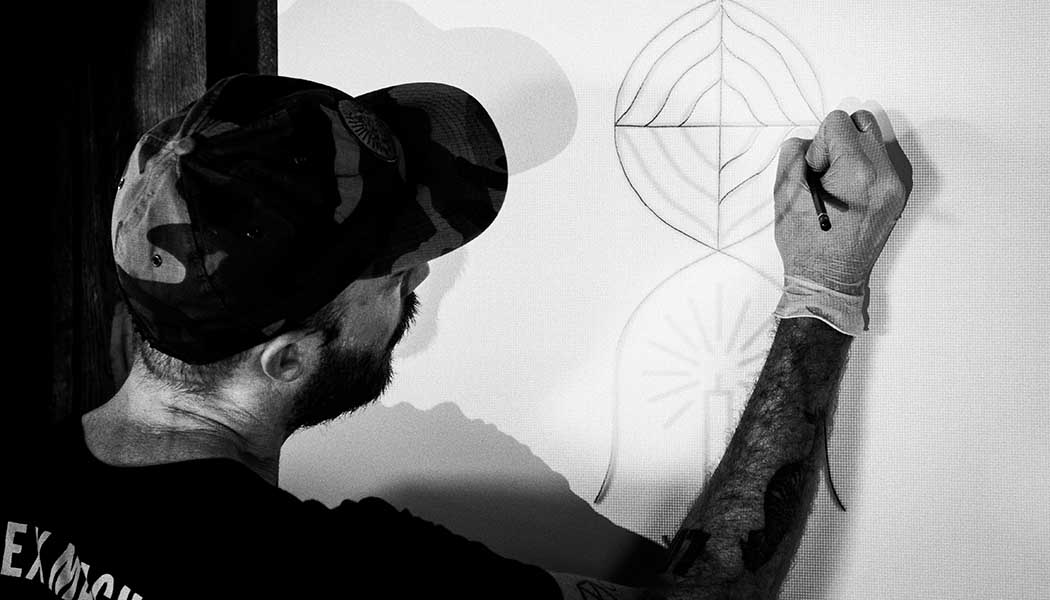 They finally found it. It’s not overly massive, but it’s big for them. It’s got the design area all up one side. In the middle is a big timber library divider structure. Thick old recycled beams reborn into something new. Not imposing so much as impressive. Like all their design, it’s been very well considered. On the other side they have their private motorbike garage. They like to fiddle on their rides. After all, they are just two boys. Two hours working tempered by two hours tinkering. Buddies drop by and they down tools – whether it’s a spanner, a stylus or a pencil, to hang out. Mornings they have their favourite coffee shops that they haunt with friends. Nights they head to their favourite bars. It’s all very social. 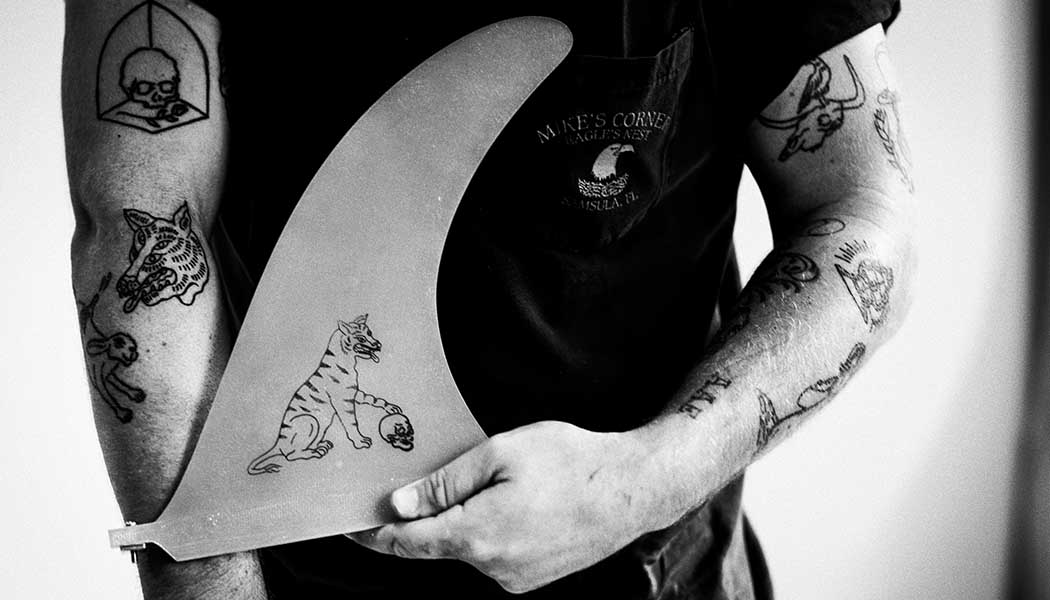 In a internet-infested, bustling, worldwide design scene these two keep their head down. Once bitten, twice shy. There was an awkward situation where they were called out over a design. Some small thing unconsciously copied. It was a cathartic moment. As designers they need to remain authentic. So they turned to the past. Their favourite artists are all dead, you can see that pretty quickly from their work – Ruben-esque women casually reclining on surfboards; Egyptian hieroglyphics; North Indian mythical imagery; Greek referenced iconography. Typefaces most people aren’t using. Space. I see a lot of space. It’s beautiful, balanced and simplified. Individually both of them had an incredibly strong visual presence on the Net. Collectively they have added to it. Just nowadays you don’t find them browsing so often. 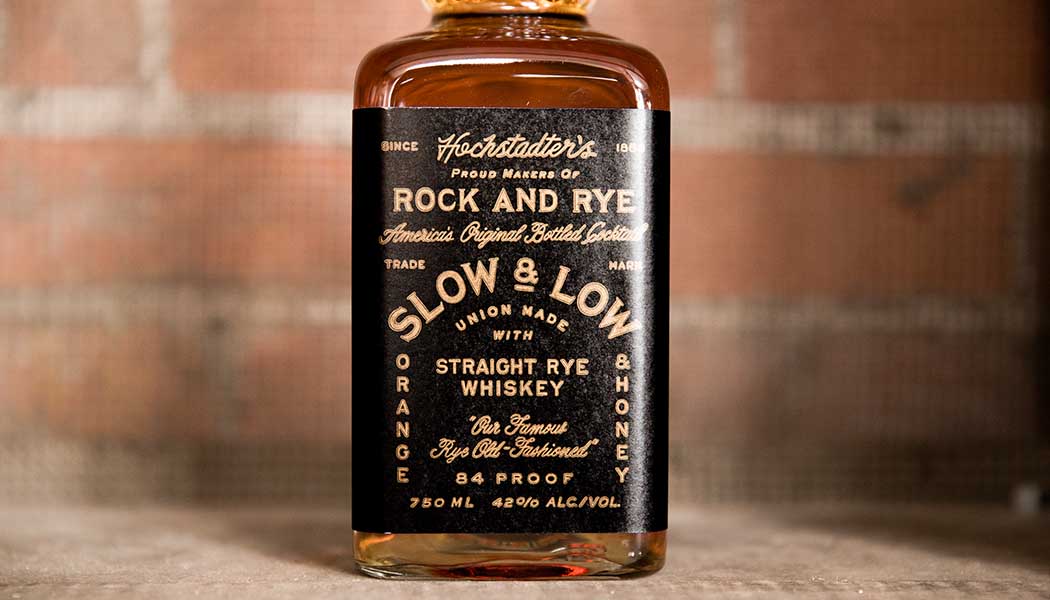 Land is driven to making work that has longevity, the idea that if they try a little harder the net result could be work that might have relevance in five or so years rather than just one or two. Frequenting the bygone to build brand new rather than looking over their shoulders to see what the other guys and gals are doing. 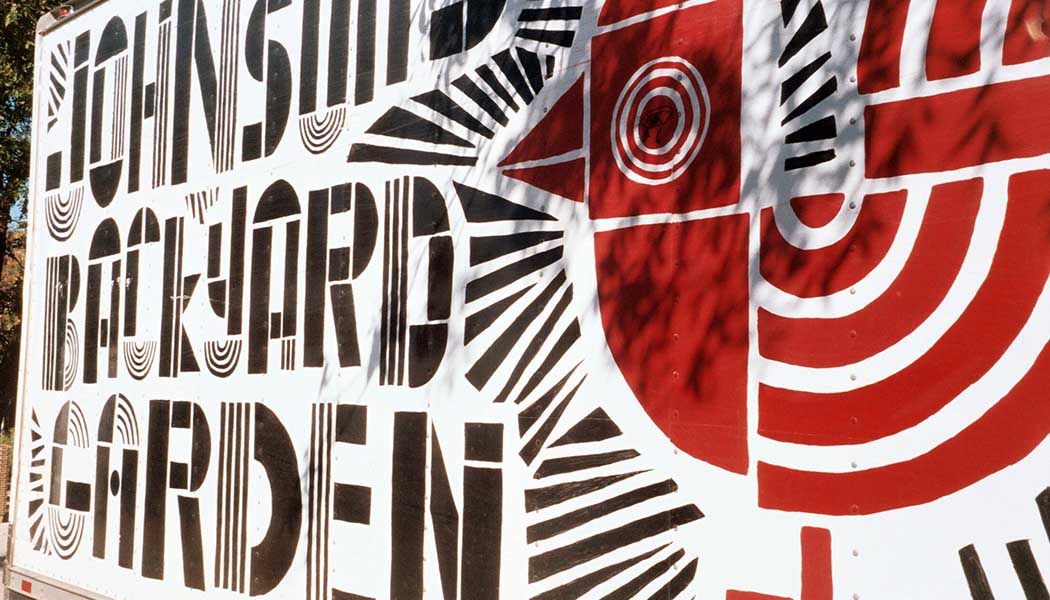 We meet at Deus ex Machina’s Temple of Enthusiasm in Canggu. They’d been invited over to Bali for an artist in residency month. Renee came and they bought along another buddy, Kevin – a horticulturalist/gardener/odd job type who liked to surf and thought it would be a good idea to join them. 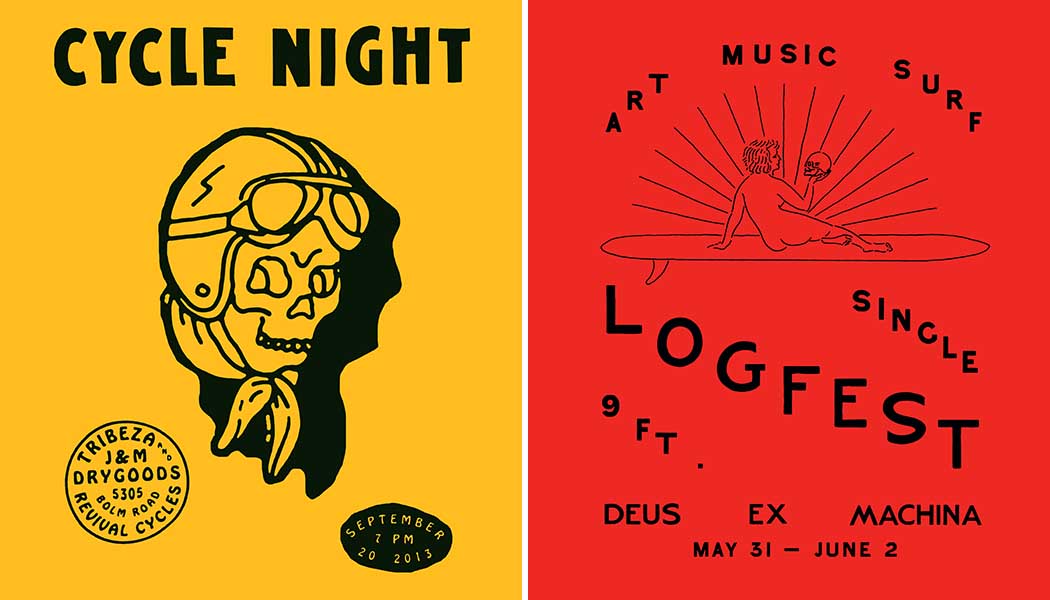 While here they produced a drove of designs for Deus to use. Something they had been doing on and off for a couple of years. Way back, just after Land’s inception, when the world didn’t know them as an entity, both had been contacted separately by Carby Tuckwell – Deus’ founding partner and creative director who asked them if they’d be interested in sending him some scribbles he might use. So they did. I ask them why – surely they knew little or nothing about this fledgling Australian brand. They both chuckled and told me that Carby gives great email. They also loved Carby’s appreciation of their first effort. And from there the collaboration, and the emails, began and have been going ever since. 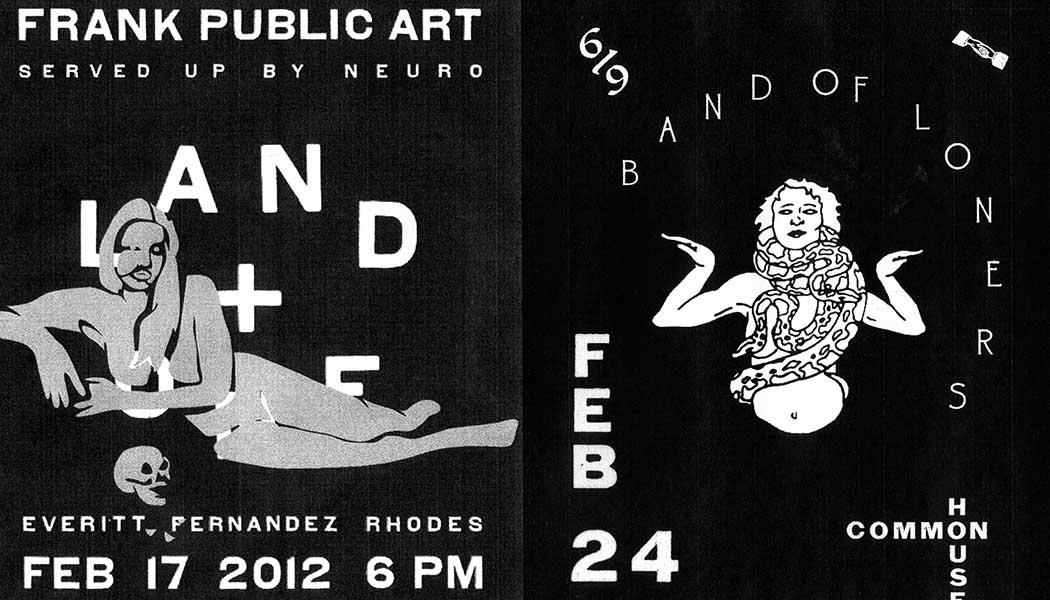 While in Bali they worked with a lot of different materials and people to put together an art show at the Deus Gallery. “A Gift to the Dogs of Time” was a multi-media raft of work containing multiple influences – a surfboard shaped by Ryan Lovelace, a motorcycle built in the bengkel at Deus under direction from Land, illustrations covered in resin, gold leaf inlays and a romp of printed pieces. The diversity of work is testament to one of their golden rules … don’t do any one thing for too long. 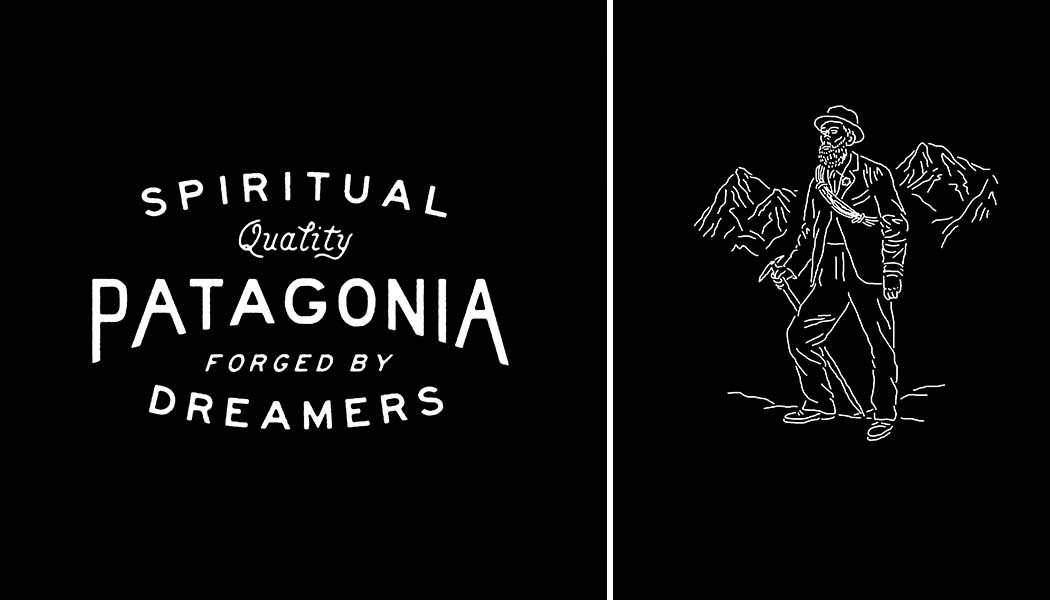 A few hours here, a few hours there. Stop for a beer and a belly laugh before starting back out on whichever project took their fancy. In the machine shop, at the bar, or up in the gladak doing scribbles or finished art. Mornings were mostly beach-bound, something you don’t get a lot of living in Texas, and which they took full advantage of. They did a quick trip up to West Java for a few days. If you fly half way around the world you might as well take advantage of the situation and do a spot of poking about. And then just as we got to know them the exhibition opened and they were gone. 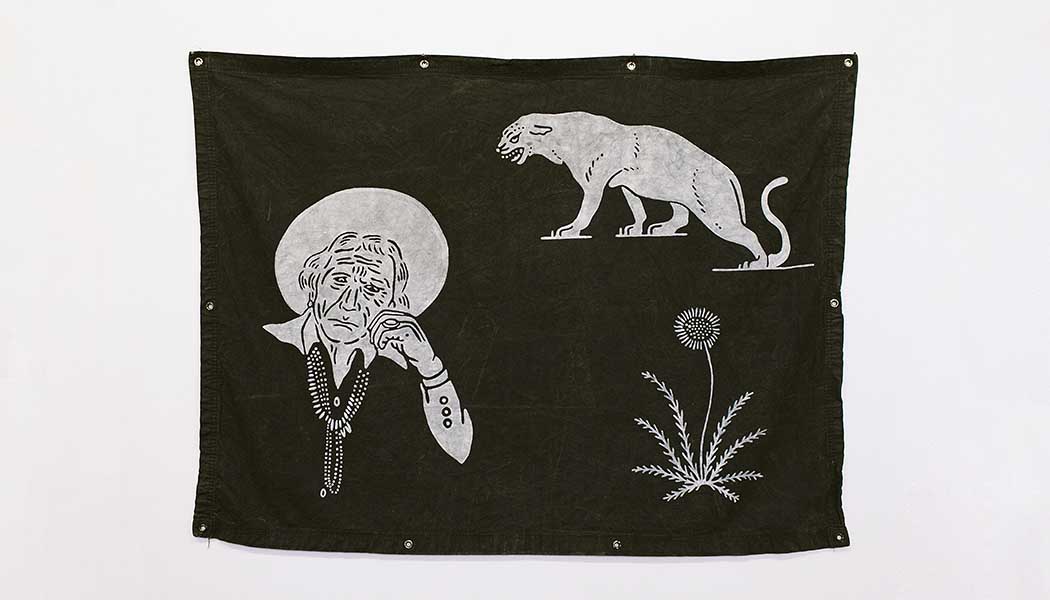 It was an incredible jaunt with these guys, albeit brief. They ride a wave of stoke that is awe-inspiring … finishing one thing and moving to the next, not pausing, abandoning it to time and not getting too attached. The more you give out or let go of, the more you get back in.