Ondy Sweeting checks out the menu at Bali’s newest nightspot.

ShiShi Bali is the island’s newest and most elegant clubbing destination with a superb supercharged restaurant delivering a crossbred Asian menu that is the food of gods.

The entire menu has been developed around the premise that guests will take a ride up ShiShi’s dramatic glass elevator for some post prandial booty shaking in the awesome nightclub and are not likely to want to eat a lavish curry before hitting the dance floor. 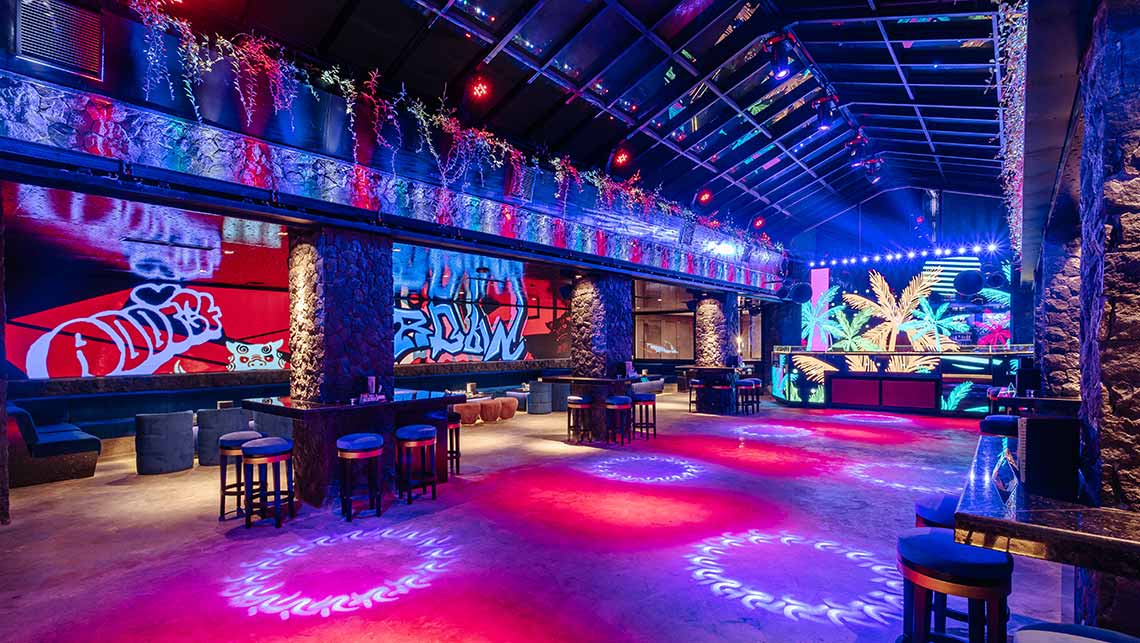 James spent months devising, developing and testing dozens of dishes for the Asian bistro and late night diner and it was almost set in print. Then he had a change of direction.

“Just before we opened, I came into the kitchen and announced everything we had done was going. I didn’t want it and we would start again,” says James.

Such a move would likely traumatise most kitchen staff who has practiced the menu from steaming buns to perfection right down to the positioning of the micro herbs when plating. But the ShiShi team pulled behind him and back to the drawing board they went.

The results are the evidence of a master manipulator of ingredients and inspiration. 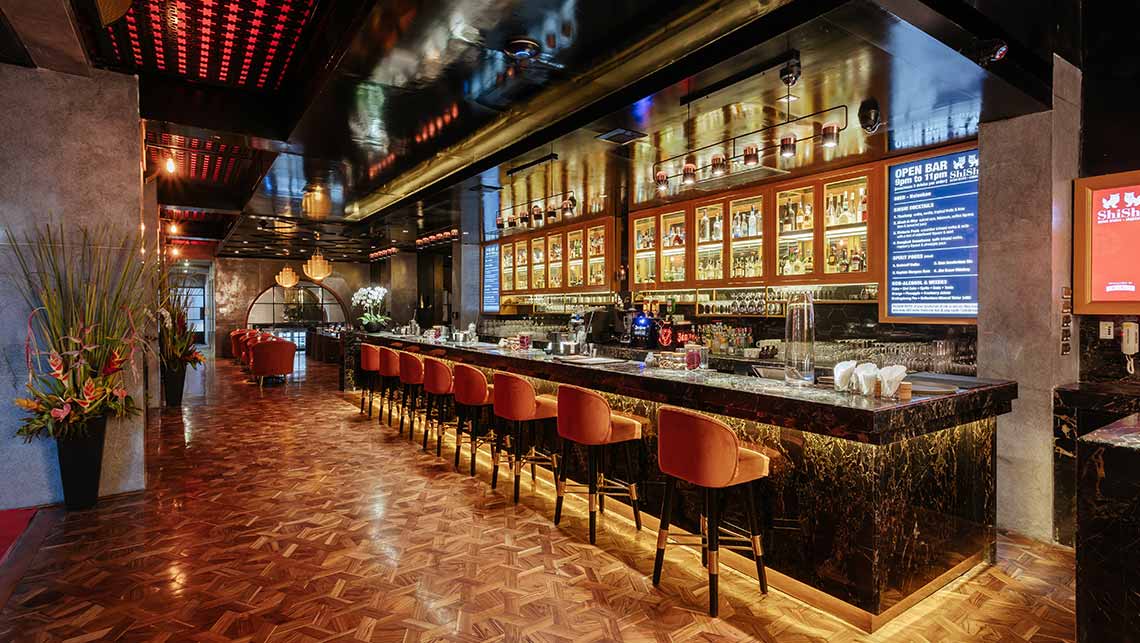 ShiShi’s menu is a series of share plates that showcase Ephraim’s skill at integrating Japanese cuisine into a broader Asian menu.

“We had originally planned a pan-Asian menu – but thought ‘what is pan Asian?’ and decided to narrow it down. A lot of the menu is Japanese inspired because it is so light and delicious,” says James.

Korean-style fried lamb rack is butter soft and flavour is enhanced with a dash of garlic and soya off set with the famed Anglo addition to lamb of mint. While wild mushroom matched with truffled noodles is meaty and delicious. A course of local slipper lobster in a sensuous garlic and miso butter is simple and superb.

The amuse bouche has yellow fin tuna topped with caviar served in a cone, while the sushi – which comes in some brilliant blends including grilled tiger prawn, tobiko and spicy lump crab – is served on a custom-made, hand forged stand that is as beautiful an art form as the sushi.

As one would expect from James, condiments such as pickles, dipping sauces and hot roasted chili sauce are made in the kitchen from hand-picked produce that has to be the up to mark. 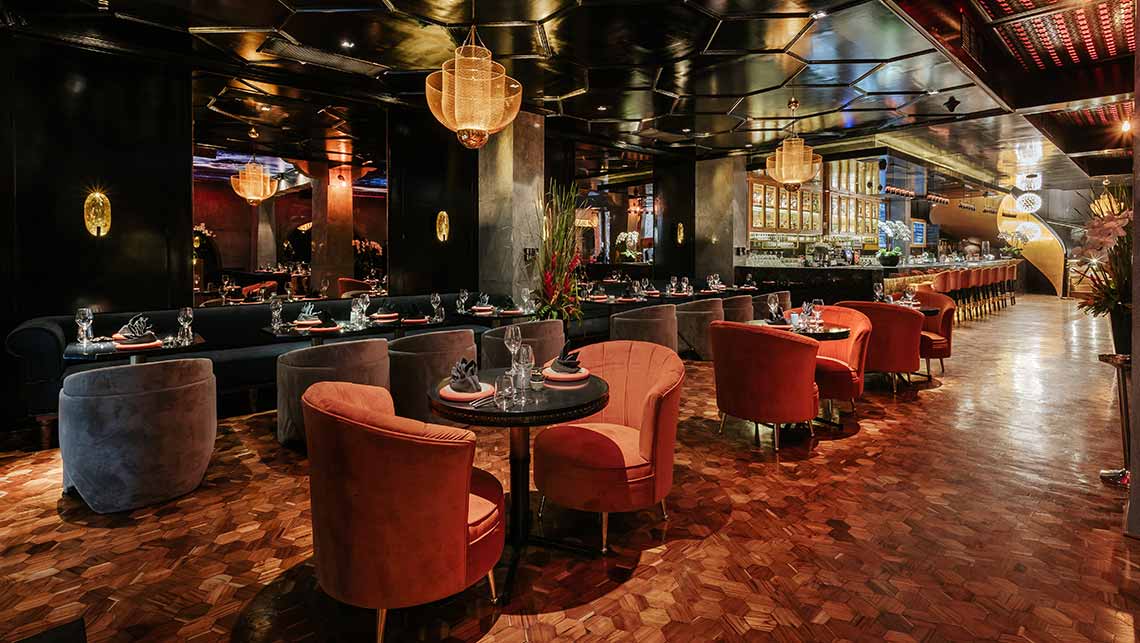 “I have always been mad about excellent ingredients. They are the backbone of flavour and the best way to coax out the complexity of a particular dish. There is no point creating a dish if you do not have the right mix of quality ingredients,” says James, who uses only specific types of chili for his piquant sauce. When it is at its best, he makes the chili sauce in bulk to ensure supply.

ShiShi has a late night supper menu that is sectioned into cheekily named ‘Foo King fried rice’ and ‘Koo King noodles’; a section from the ocean and the land while entrees are named and shamed as ‘foreplay’. ShiShi has six different types for ‘dirty Asian dumplings’, including two dishes that are vegan. In fact, given the upscale dining of ShiShi, vegans have a great choice that covers tempe and mushrooms, vegetable fried rice, sushi rolls and wok-seared edamame. These dishes have been developed to deliver an intense energy hit packed with flavour that will underpin a night of carousing in the club and prep the guest to go back for more without feeling weighed down.

ShiShi, which is in Petitenget, is a stunning multi-function destination set over several levels with various bars and a chic nightclub that has leather banquettes overlooking the dance floor.

Given the popularity of these limited spots, it is best to get in early and reserve one for the night. Throughout the venue the abundant staff are well trained and know their subjects well from matching a wine with a spicy laksa to delivering chilled French champagne and caviar to a night club table. Nothing is too much trouble.

Wah Anarchists To The Core.

theyakmagazine
•
Follow
Here comes the last quarter of 2022, and of course, a few new places are sprouting up around the hood! Have you met your newest neighbours yet? If not, swipe left to meet them all and don’t forget to add a comment if we missed anyone! 😉 1. Is there anything better than a perfectly roasted coffee to start your day? @movenpickcafebali has just reopened at @samastabali! Open from 8am - 10pm, you can enjoy your coffee along with decadent delicacies and Swiss-style artisanal ice cream. You can even bring your furry friend along as they’re other furry-friendly! The Jimbaran Way all day. 2. It's a new gastro pub, garden bar and a boutique nightspot nestled in the heart Seminyak! @thesocialseminyak is the new venue for you to get social, really social, make new friends and party the night away with their intricate and excellent cocktails! Let’s Petitenget all the way! 3. @missfishbali incorporates Japanese tradition with a focus on hand-rolled sushi inspired by the edomae style – executed to the highest of standards. Watch the masters at work, right in front of your eyes, as they freshly craft the most exquisite dishes! All in the heart of Berawa. 4. New kid on the Berawa Block too is @gabbi_bali, a modern Italian restaurant with a strong sustainable commitment to their products. You can expect local and fresh fish and vegetables, and discover incredible local flavors, all with a pinch of Italian inspiration, dish by dish, by delicious dish 🥂 5. Heading up to Ubud and surrounded by the lush rice fields of Ubud meet @giojabali recently opening its doors on the Penestanan road! Open daily from 5pm to 10pm, Gioja Italian Restaurant offers an a la carte menu and a 5-course set menu with vegetarian and vegan options, complete with an exclusively-selected wine collection. 6. Not far from Penestanan @thekelusa has been reinvented at the luxurious, cultural yet modern @samsaraubud! The Kelusa is a culinary gem surrounded by the verdant and serene Payangan rainforest. This picturesque forest has become a fixture of many Bali travelers’ social images, which adds in making the dining experience at The Kelusa highly satisfying, not only orally but also visually!
View on Instagram |
1/9

theyakmagazine
•
Follow
What's better than pampering yourself at @mariacurau_bali in a middle of a busy week? 🥰💖 We popped up to Maria Curau Pererenan to try their 21-free nail polishes! They have awesome range of colours, all are so pigmented yet super healthy for your nails! Vegan, breathable, cruelty-free, and Halal. This means you can get a good-for-you manicure without sacrificing your health 😍✨💅 . . #theyakmagazine #mariacurau #halal #nailart #naildesign #veganlife #bali #pererenan #berawa #canggu
View on Instagram |
2/9

theyakmagazine
•
Follow
@iknkvillas is made up of three bespoke, luxury villas located barely a minute away from the beach in the heart of Berawa, Canggu, Bali. Each was inspired by our favourite cities: Tokyo (SOLD), Tulum and New York. Get to know them more on MinYak September II 2022. Link in our bio. . . . #theyakmagazine #luxurylifestyle #iknk #bali #architect #architects #architecturestudent #architectural #arquitetura #explorebali #architectures #luxuryhome #thebalibible #balimansion #instadesign #modernhome #balicili #thebaliguideline #architettura #berawa #canggu
View on Instagram |
3/9

theyakmagazine
•
Follow
So what do we have to look forward to this September? The premier of Ticket to Paradise, slated to launch in Bali on September 30th? The vernal Equinox with Mercury moving into retrograde? The price of BBM (Bahan Bakar Minyak) rising an astronomical amount, and possibly the out-flux of those that came because Bali was so “cheap”. Times are changing indeed, and we at The Yak have our finger on the pulse of what to look forward these next couple of weeks. Let's read MinYak September I to see what's new, what's happening around the island and what to bring in your hamper. Link in our bio ✨🌴 . . #theyakmagazine #luxurylifestyle #bali #baliindonesia #balilife #explorebali #balidaily #balibible #baligasm #thebalibible #infobali #visitbali #balitravel #balifood #balifoodies #baliguide #balilivin #thebaliguideline #balivacation
View on Instagram |
9/9
Follow Us On Instagram