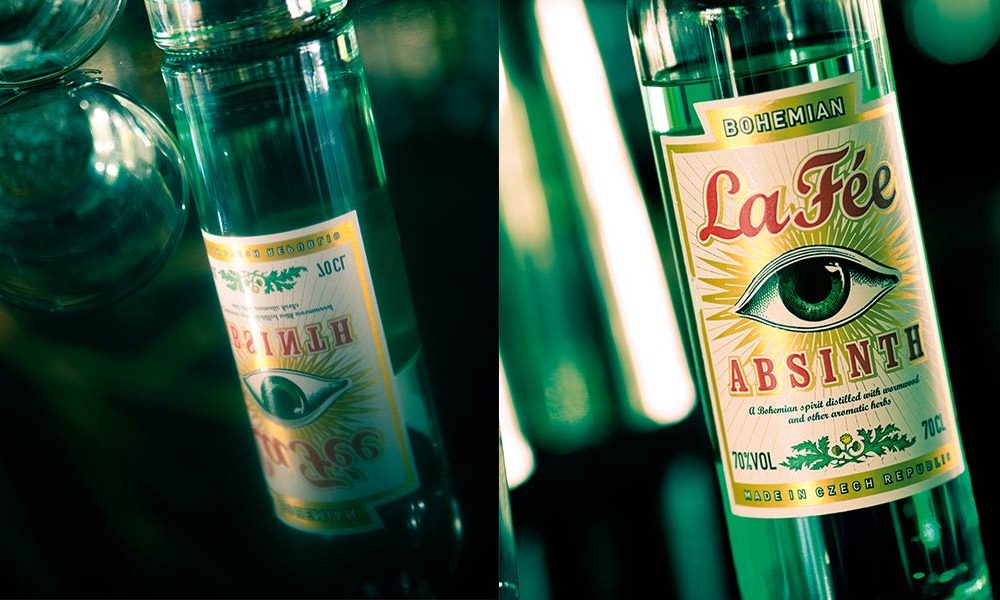 Take neutral grape spirits combined with dried flowers and wormwood leaves, suffuse with vaunted aphrodisiac powers, mix in a history dark with tales of death and madness and you have one of the world’s most maligned – and misunderstood – aperitifs: absinthe. A drink for lovers of life in all its forms. By Katrina Valkenburg. Photos: Yaeko Masuda. 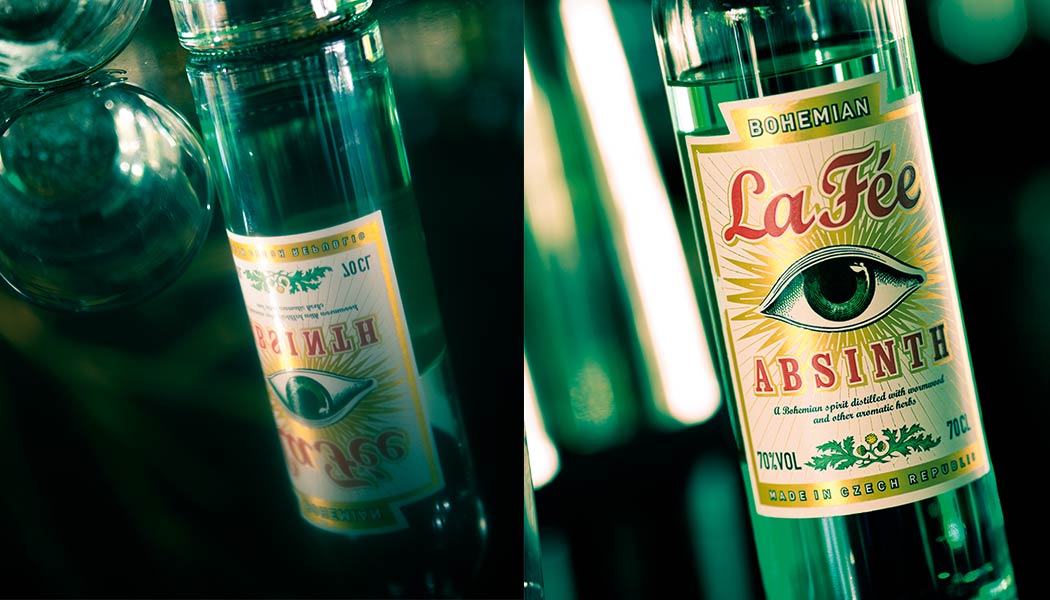 To those of you who read this column regularly, my apologies, I have strayed. Strayed from the vine, that is. And now I want to talk of another love: absinthe – the Green Fairy.

The reason being that I recently consumed a certain amount of this lusciously warming and decadently destructive spirit after an already fairly liquid lunch in Bali and the memories, well, blurry memories at least, came flooding back. All those new-best-friends I’ve met in places well forgotten under the influence of absinthe – a trip down the proverbial memory lane.

Memories I can talk about include being not-so-politely asked to shut up in a Parisian bar in the Marais whilst singing the “Habanera” from Carmen at the top of my lungs at three in the afternoon; cozying up to some notable from Kiev in a jazz bar in Prague; a long night in an ultra-chic nightclub in Barcelona and the resultant reckless drive through cobbled back streets to a 12th century palacio; having a grand piano moved from the foyer of a Melbourne hotel up to a suite so that Joe Cocker’s musical director and pianist could accompany my absinthe-charged vocals… 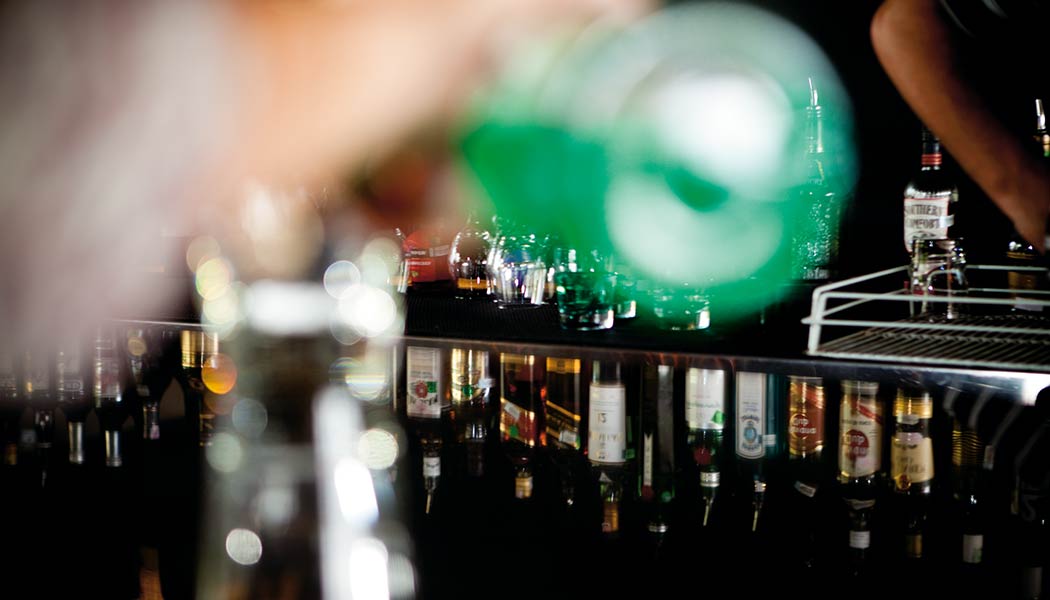 Among the 15 herbs in absinthe are the dried flowers and leaves of wormwood, a plant that grows abundantly to about three feet tall in temperate regions around the world (including Chernobyl and excluding Bali, for all you home brewers). The German name for wormwood is Wermut, or vermouth, and there’s a small amount of wormwood oil in vermouth. The Latin name for wormwood is artemisia absinthium and its oil is known as absinthol, hence the name given to this extraordinarily maligned elixir.

The active ingredient in absinthe comes from wormwood and is called thujone. Administered in large enough doses it causes epileptic fits, along with a myriad of other symptoms.

The Ancient Egyptians swore by wormwood to get rid of their intestinal worms. The Aztecs had to agree, but took things a few steps further and prescribed wormwood to aid digestion, stimulate the appetite, promote menstruation and to aid the healing of infected wounds or open ulcers.

The Ancient Greeks dedicated wormwood to their goddess Artemisia, and claimed that it could counteract poison. Whether from hemlock, mush-rooms, or sea dragons, wormwood was the antidote you needed. Hippocrates also prescribed it for jaundice, anemia, rheumatism and menstrual pains.

And so our history lesson finds us in relatively modern times in Switzerland. The inventor of modern absinthe was Dr. Pierre Ordinaire, a Royalist, who fled France in 1790 and set up near Neuchatel in Switzerland where he compounded his own drugs. Having observed an abundance of the wormwood plant whilst out riding in the mountains, he began experimenting with infusions of dried absinthium and other herbs. In 1792, he concocted a formula of 15 plants, including wormwood, Spanish anise, hyssop, Melissa, coriander, veronica, chamomile, persil and spinach for purely medicinal purposes.

The French army soon began to administer it as a common health tonic until the soldiers grew overly fond of the unique, fragrant and very high-proof beverage. It was only a matter of time before the emerald aperitif found its way into Parisian high society and before long the market grew like wild fire, reputedly reaching sales of millions of gallons a year in France alone. 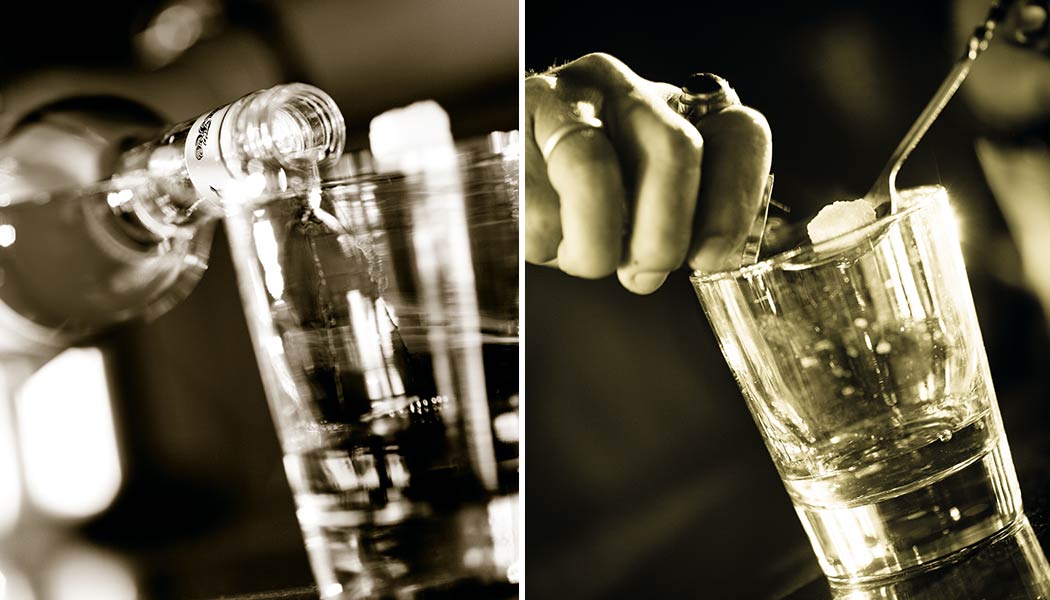 And here I venture back to more familiar ground – the wine industry. The Green Fairy had taken such a significant chunk out of wine sales at the beginning of the 20th century that, along with the church that saw absinthe’s immense popularity as a social and economic threat, a backlash against absinthe began.

In 1905, there came the story of one Jean Lanfray, a burly, six-foot vineyard worker (see, we’re still on wine) from a very small community in Switzerland, whose heinous crimes sealed the fate of absinthe for nearly a century.

Lafray’s daily intake of a myriad of alcohols was over the top. Swiss police faithfully recorded that Lafray’s alcohol intake on this fateful day included:

5:30am: Crème de Menthe with water and then a Cognac with soda;

5pm: one litre of piquette;

6pm: Strong black coffee laced him a healthy slug of marc, a powerful brandy he made himself.

Having consumed the above he committed the unthinkable – he murdered his wife at point blank range with a long-barreled rifle, then his oldest daughter and finally his sleeping infant daughter, before turning the rifle on himself – in this he was unsuccessful – he survived the bullet that passed through his jaw and was found by the police in the stable in a deep stupor with his youngest daughter in his arms. 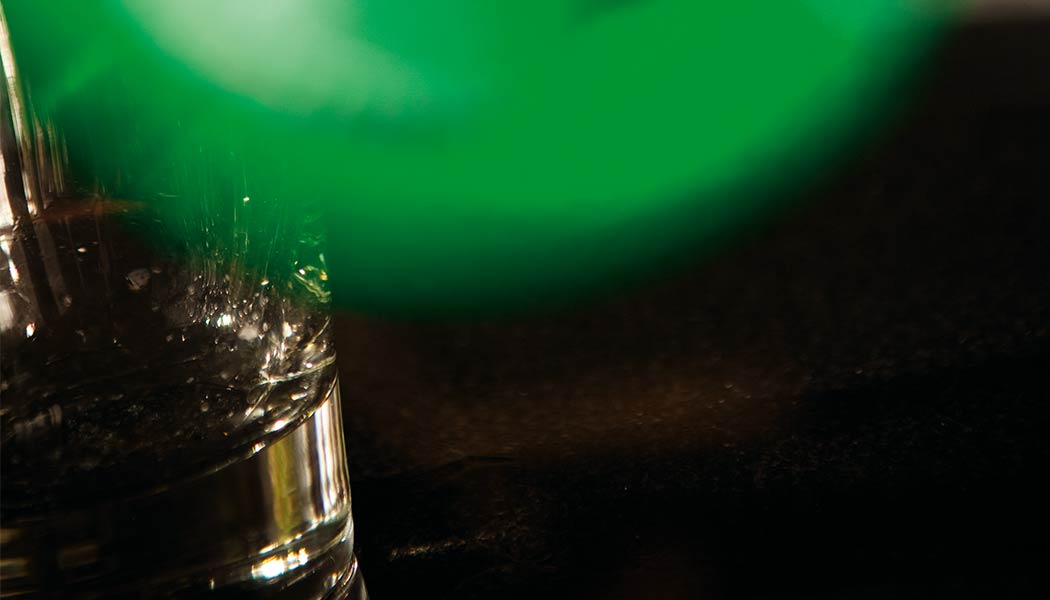 Later, when the police and psychiatrists delved into his behaviour pattern, they found that he drank at least two to two and a half litres of vin ordinaire and two to two-and-a-half litres of the stronger piquette – about six quarts in all plus several brandies and cordials and one or two absinthes per day.

Apparently when Lafray was taken to view the three coffins, Nurse Marie Blaser said that the murderer wept and moaned over and over.

“It is not me who did this. Tell me, O God, please tell me that I have not done this. I loved my wife and children so much.”

Lanfray insisted he did not remember anything about the murders.

Soon after, the villagers of this small community discovered that Mme. Lanfray had been four months pregnant with a male fetus. A mass meeting in the schoolhouse was organised and there they voted overwhelmingly on the scapegoat – absinthe.

Within a few days, 82,000 people had signed a petition to ban absinthe. News spread like wildfire along the proverbial grape vine and, by 1908 absinthe was banned across virtually all of Europe and England and eventually in the United States, where anti-absinthe laws were written into the Constitution.

Thankfully a number of countries continued to produce absinthe – most notably the Czech Republic and Spain.

Lovers of the drink have said that “absinthe is a spark that explodes the gunpowder of wine”. H. Warner Allen, the English liquor authority, warned: “Those who experiment with absinthe will do well to remember that it has the curious property of doubling the effect of every drink that is taken after it, so that half a bottle of wine at the meal which follows it will be equivalent to a whole bottle.” 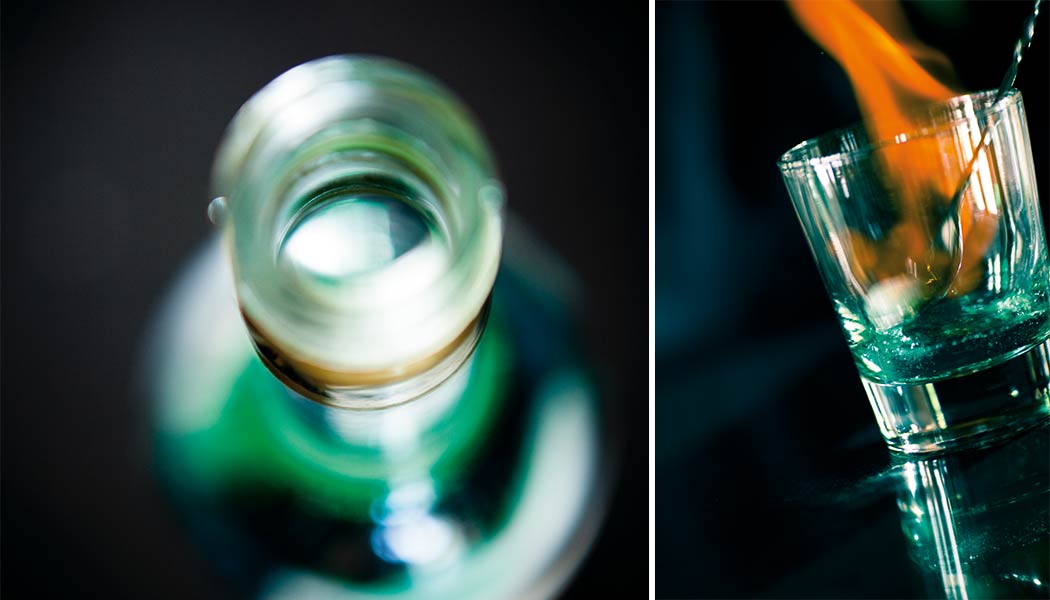 Ernest Hemingway (amongst other literary luminaries) has written the warmest of tributes to absinthe. He fell in love with it in 1922 when in Spain and spent the rest of his life in sheer reverence.
Hemingway said that when you sipped it slowly, it was an “opaque, bitter, tongue-numbing, brain-warming, stomach-warming, idea-changing liquid alchemy…In this, the real absinthe, there is wormwood. It’s supposed to rot your brain out, but I don’t believe it. It only changes the ideas. You should pour water into it very slowly, a few drops at a time”. Whiskey, Hemingway added, “does not curl around inside of you the way absinthe does. There is nothing like absinthe.”

Absinthe’s dangerous mystique today accounts both for its illegality and its marketability. Its wild bohemian past and supposed lethal magic has done wonders for marketers who perpetuate its mystery. Although anti-absinthe laws have slackened over the last decade or so, (most members of the European Union now allow the sale of absinthe, with limits on thujone content), absinthe’s stigma lingers and paraphernalia such as spoons, glasses, fountains and bottles fetch outrageous prices. Even Martha Stewart has joined the bandwagon, admitting her interest in absinthe collectibles in a Vanity Fair interview.

The best brands on the market today offer rich and fragrant spirits but if you’re looking for hallucinogenic effects, it would be wise to look elsewhere – the amount of the active ingredient thujone is so small that sniffing a brandy balloon could get you higher.

But absinthe remains an intoxicating magnet for those who enjoy the flavour of anise and its infamous history cannot help but raise its popularity amongst connoisseurs and thrill seekers the world over. 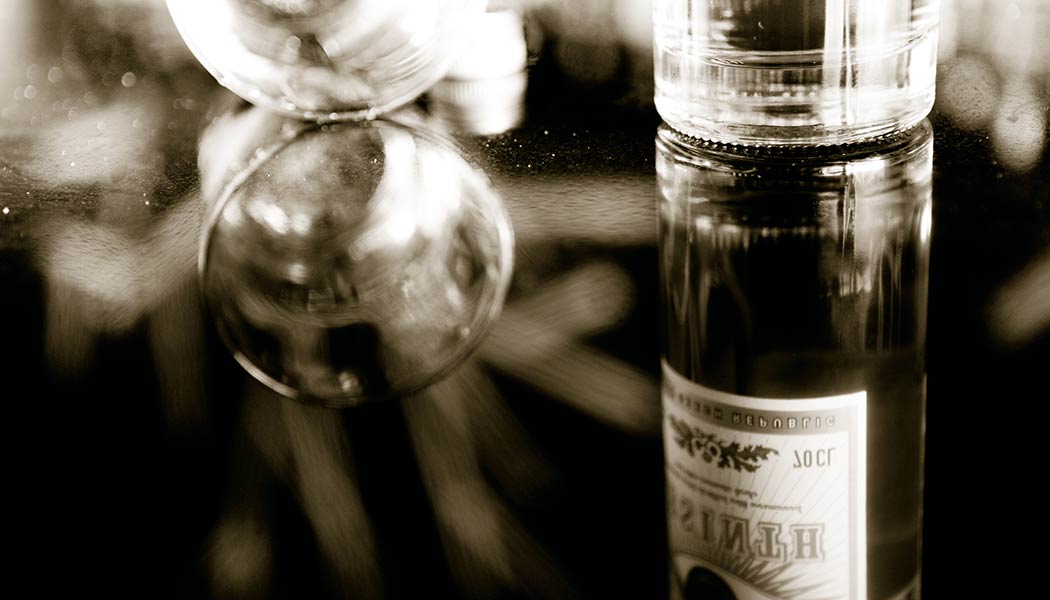 Ok you are ready. Here’s how to prepare your absinthe:

AND now it’s time for you to drink it.

Traditionally, absinthe is prepared by placing a sugar cube on top of a specially designed slotted spoon and then placing the spoon on the glass which has been filled with a shot of absinthe. Ice-cold water is then poured or dripped over the sugar cube so that the water is slowly and evenly displaced into the absinthe, typically one part absinthe and three to five parts water. During this process, components not soluble in water (mainly those from anise, fennel, and star anise) come out of solution and cloud the drink. The resulting milky opalescence is called the louche (Fr. “opaque” or “shady”).

Releasing these components allows herbal aromas and flavours to “blossom” or “bloom” and brings out subtleties originally over-powered by the anise. This is often referred to as “The French Method.”

“The Bohemian Method” is an alternative that is popular primarily due to the use of fire. Like the French method, a sugar cube is placed on a slotted spoon over a glass containing one shot of absinthe. The difference is that the sugar is pre-soaked in alcohol, usually more absinthe, and then set ablaze. The flaming sugar cube is then dropped into the glass igniting the absinthe. Finally, a shot glass full of water is added to douse the flames. This method tends to produce a stronger drink…

Katrina Valkenburg is a wine consultant and educator. All correspondence to katrinav@mac.com