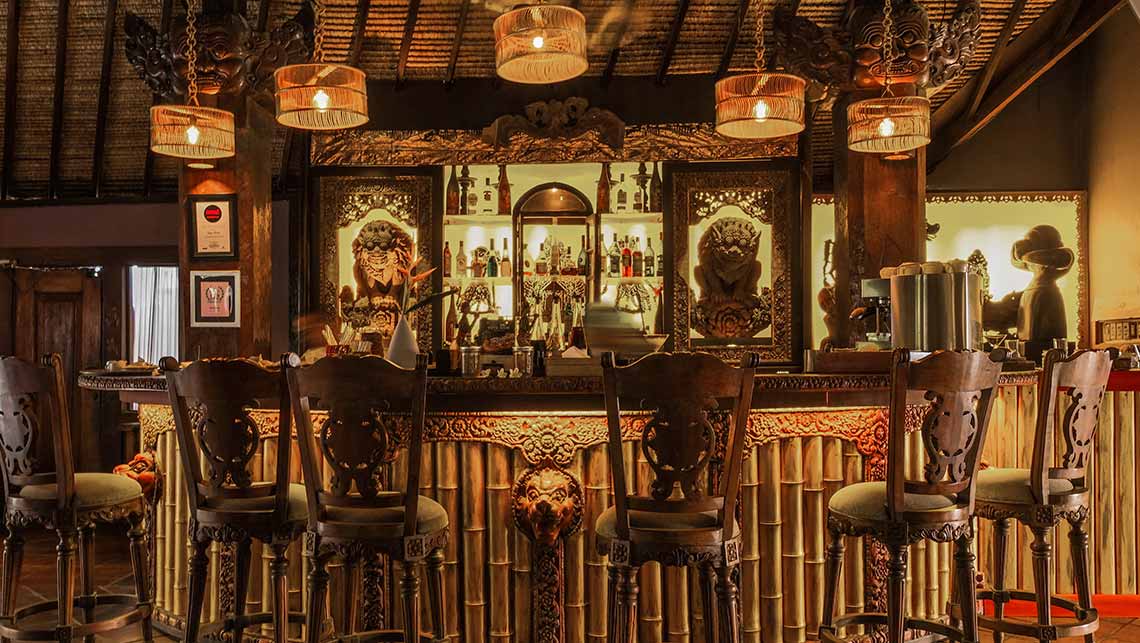 The contrast could not be more remarkable.

The Canggu street that attracts a legion of surfers, hipsters and digital nomads overshadows the visionary Tugu that once held pride of place on this windswept surf beach.

Tugu Hotel is a cultural island amidst the tourism wave that has all but swallowed it. A step to the right off Batu Bolong takes you into a world that is as mythical as it is vibrant, as fascinating as it is unique. It tells stories of another time and stands as the perfect antidote to the barely clad, the modern tribe that (dare we say it?) seems to ignore all cultures but their own.

Pulling up to Tugu, a girl brushes past me. Wearing nothing but bright pink headphones and a tiny bikini, she strides purposefully towards the beach. She disappears quickly into the streetscape that is crowded with billboards and bars, busy cafes buzzing with conversation and Bintangs, with swarms of motorbikes creating a familiar soundtrack.

This graceful hotel feels like a parallel universe; a tribute to Indonesian and Balinese culture, it was created to tell the stories of years gone by, of a culture that survives and thrives alongside the onslaught of tourism wherein worlds collide. For the first time visitor it can come as a shock that something this beautiful and reverential exists here.

Tugu’s vast lobby has been transformed recently. Walls have been knocked out to reveal its serenity to the street, inviting unsuspecting travellers to discover what lies within. The huge bale that houses the lobby envelopes its guests with scattered seating, an atmospheric cocktail bar, art, antiques and offerings, which are all overseen by a towering stone Garuda.

Created by an art lover, an impressive personal collection fills each space with timeless tales and mythical references. Beyond the lobby, lotus ponds, coral walls and reclaimed buildings from Bali and colonial Java create a resort that is as magical as it is beautiful.

While Ji’s terrace restaurant upstairs is a popular setting for sunset and sushi, the lobby below has been transformed into an inviting space for all day dining, special events, cultural evenings and cocktails. Iwa is the space renamed and it’s a revelation. Scattered seating surrounds the central joglo, awash with soft cushions, vibrant flowers and the tang of incense. A bar has replaced the reception desk that once dominated.

Overlooking Iwa, it’s as scented and exotic as the space itself. The name Iwa is derived from an ancient Balinese legend from the 12th century. A Balinese couple prayed for a son and when finally he arrived, Kobo Iwa was no ordinary child. He loved his food and grew into a giant of a man. No house was big enough to shelter him and so he created a giant ‘Bale Agung’. It inspired the 15 metre high bale where Iwa is housed. It is the spiritual home of Kobo Iwa, and the lobby of the Tugu Hotel.

General Manager, Jenny, explains that redesigning this space has been a priority for the hotel management.

“We knocked out the walls to let in more light but also to reveal it to the street. Those that venture into Tugu are amazed that something like this exists in Canggu’s Batu Bolong, so we wanted to make it more visible and more accessible, to invite more people in to enjoy it,” she explains.

The results are breathtaking. We are introduced to Iwa’s dining concept, where guests can choose from a menu of 8 courses served in a vessel called a Congklak, a beautifully carved platter that is traditionally used in a Javanese game, or enjoy a la carte dishes from the all-day menu.

The bar has been created, as all things Tugu, from reclaimed pieces, carved and coloured by time and tradition. The cocktail menu looks to local botanicals and exotic spices and fruit for their inspiration. Each is named for a volcano which highlights the delightful irony that is inherent in the Indonesian character.

‘Batur’ bubbles over with dry ice. Torch ginger garnishes the heady cocktail that is spiced with cinnamon and ginger and spiked with chili-infused whisky, Grand Marnier and a hint of pineapple.

It’s worthy of a photo and the tangy flavours are beautifully balanced. Our second cocktail is the ‘Rinjani’, a creamy mingle of melon and Midori, coconut and Malibu with vanilla-infused vodka, lime and palm sugar. Two very different cocktails and luckily my drinking partner and I have very different tastes. I choose spice, she chooses the smooth and creamy. 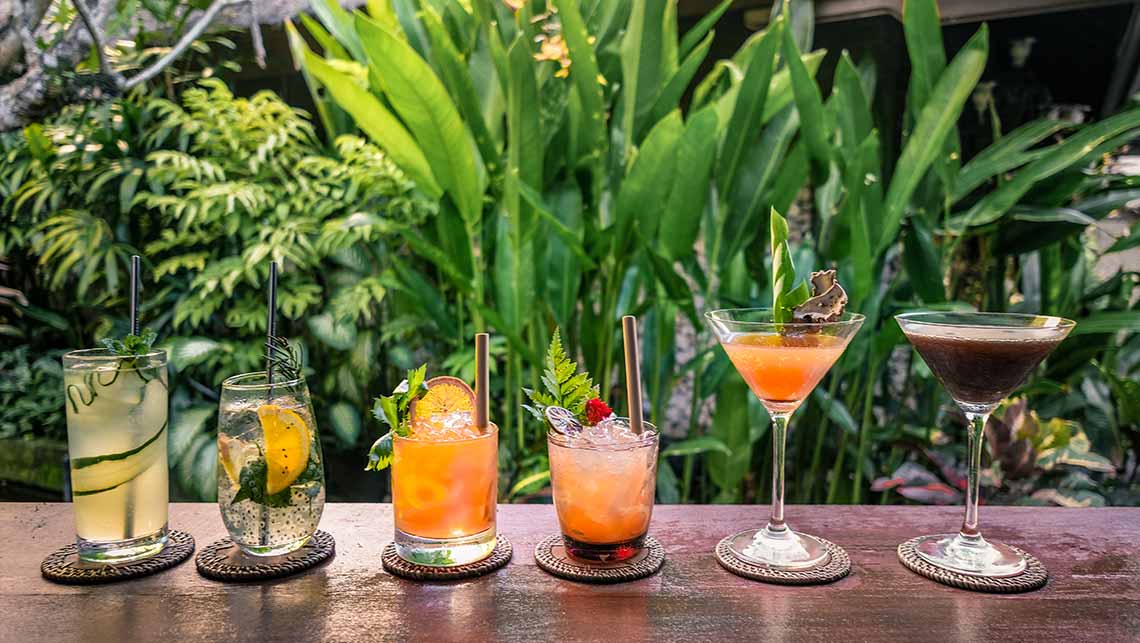 A bamboo basket of traditional crackers and a spicy Balinese sambal are served at our table overlooking the lobby and the lotus ponds that lead to the rooms beyond.

Cocktails and conversation go together and my partner, who has never walked through the entrance of the Tugu, is keen to discover more. The staff are more than happy to entertain with legends and history.

We dive in to try another cocktail and this time we are served a ‘Tambora’, a rum based cocktail with vodka, mango and passionfruit, together with a ‘Bromo’, with cinnamon-infused rum, tamarind, passionfruit, almond syrup and pomelo.

The sun is about to set and yet we aren’t tempted to head upstairs to Ji. We’ve succumbed to the hedonistic pleasures of Iwa, our cocktail exploration and the promise of a walk through the grounds of the hotel. The cocktail list goes on with a list of exotic concoctions that play on local coffee and chocolate, star-anise infused gin and pandan among the many ingredients.

The mighty volcano Agung will have to wait, along with Krakatau, Raung and Sinabung, each sound as seductive as those that have gone before. While Tugu looks to the past for its inspiration, it continues to evolve to lure the modern traveller. Hospitality here is as sparkling and fresh as the day it opened. The spaces that echo with timeless pieces are a siren for those who want to sample the culture of the country they are visiting. Something that can seem sparse in modern Canggu.

Whoever said that this modern tourist hub lacks culture has clearly never been to Tugu, it is the beating heart of Indonesia, home to authentic dances and memorable dining experiences. The spa is a shrine to ancient therapies that soothe the modern soul. The rooms hide modern conveniences behind a veil of history and art. It is and experience that goes well beyond the price of a cocktail.