AH, the great Australian road trip, there’s nothing like it.

This one was inspired by surf legend, Bob McTavish – he’d told tales of his “on the road” exploits up the east coast and inspired us to do it ourselves. With a group of friends, we set out to travel from Sydney to Noosa. 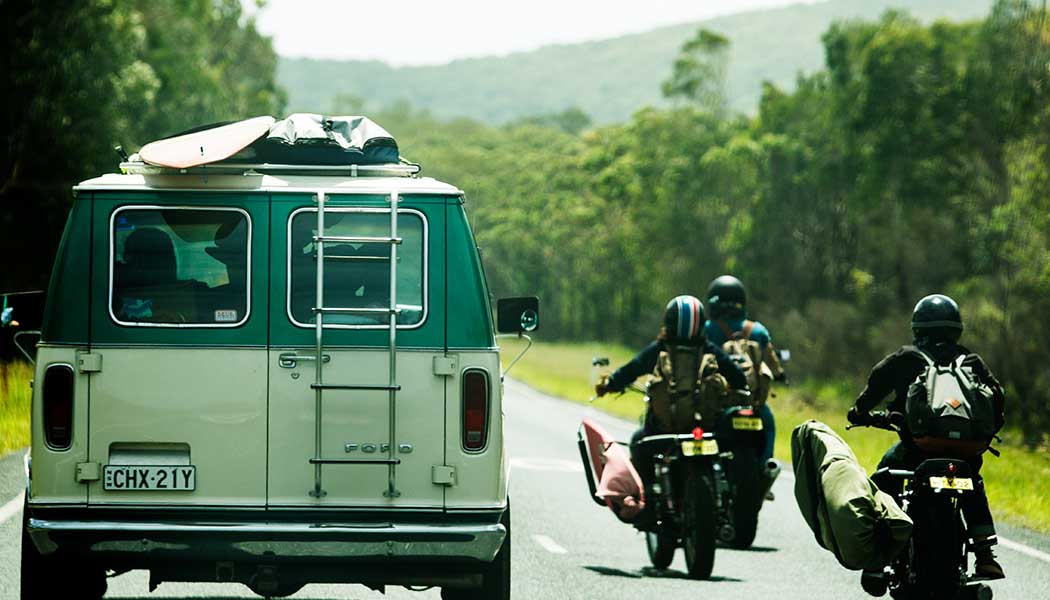 This is our story … 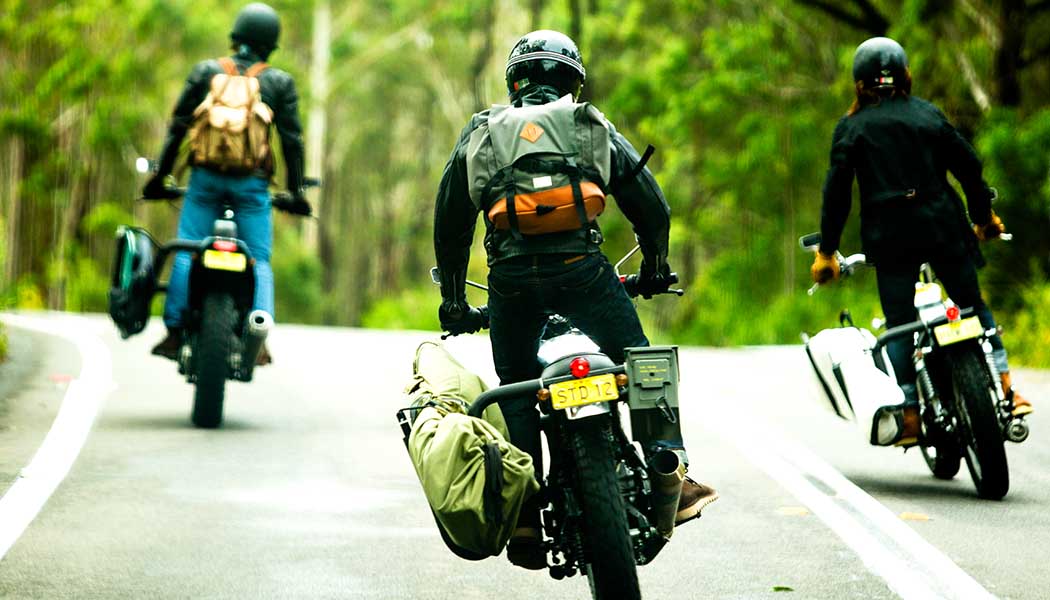 Our convoy involved a borrowed ‘78 Ford van and three motorbikes. We headed north, gripping the handlebars in the first rays of sunshine that Sydney had seen in three days. 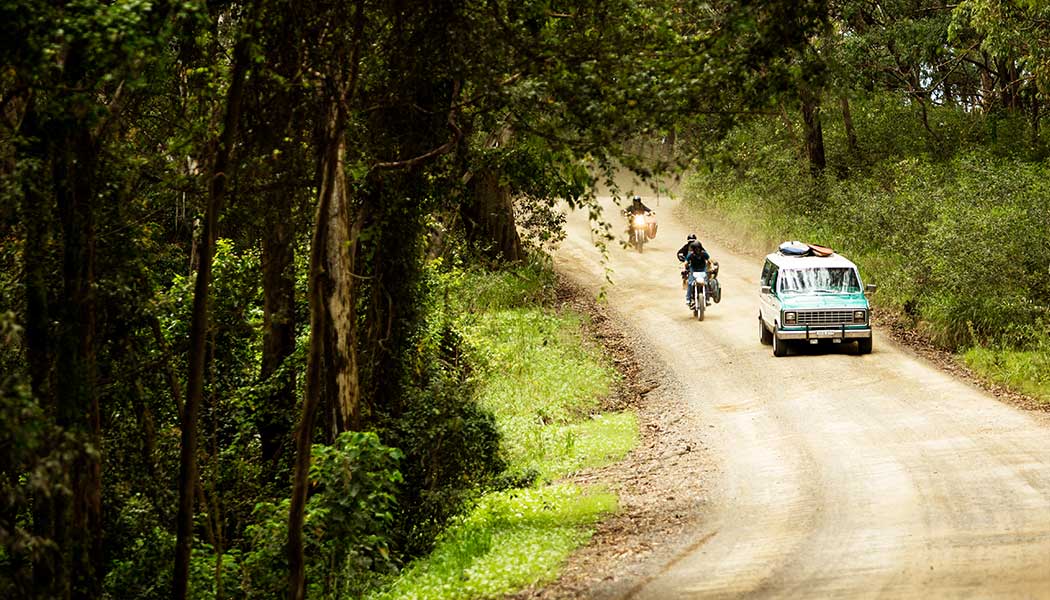 The dry didn’t last for long, only 30 klicks out of town we hit our first rainsquall. 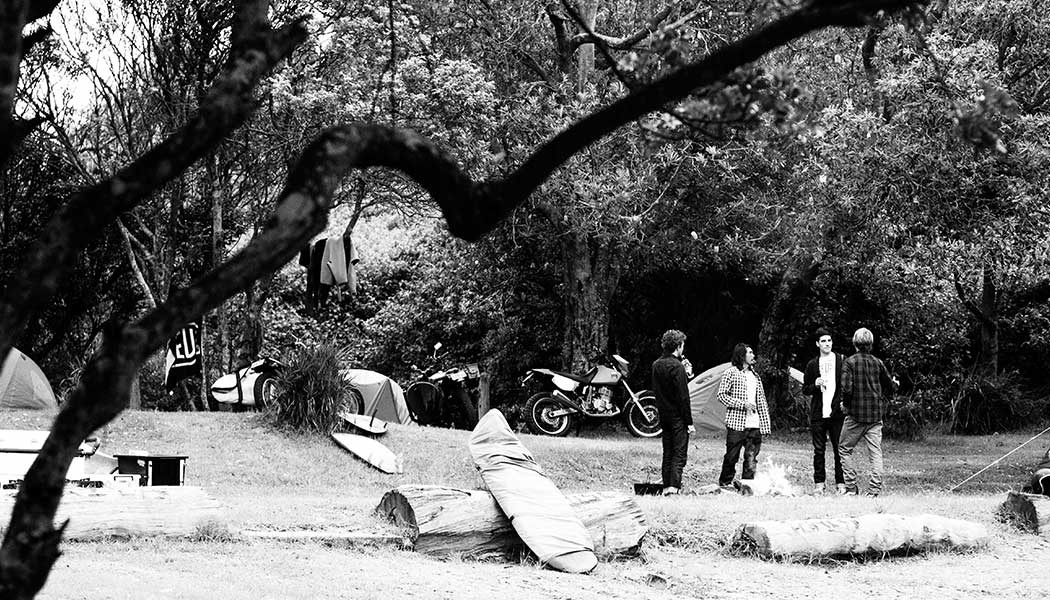 Javanese logger Husni Ridhwan; Noosa local Matt Cuddihy; and I found out just what it’s like to ride through pelting rain at high speeds. With a strong southeaster blowing, the only chance of surf was behind one of the east coast’s notorious headlands … and those didn’t have much on offer. It was up to the dirt roads and 650cc of grunt to give us the thrill we were after.

The best line I drew was not on a wave … it was around a corner.

Waves or not, it was nice to be out of the city. We set up camp near one of the back beaches, lit the fire and dried our socks. In typical camping fashion the elders served meals and the youngsters washed dishes. The day’s highlights were reviewed over a couple of beers. That night I fell asleep with the sound of my four-stroke still reverberating in my ears. 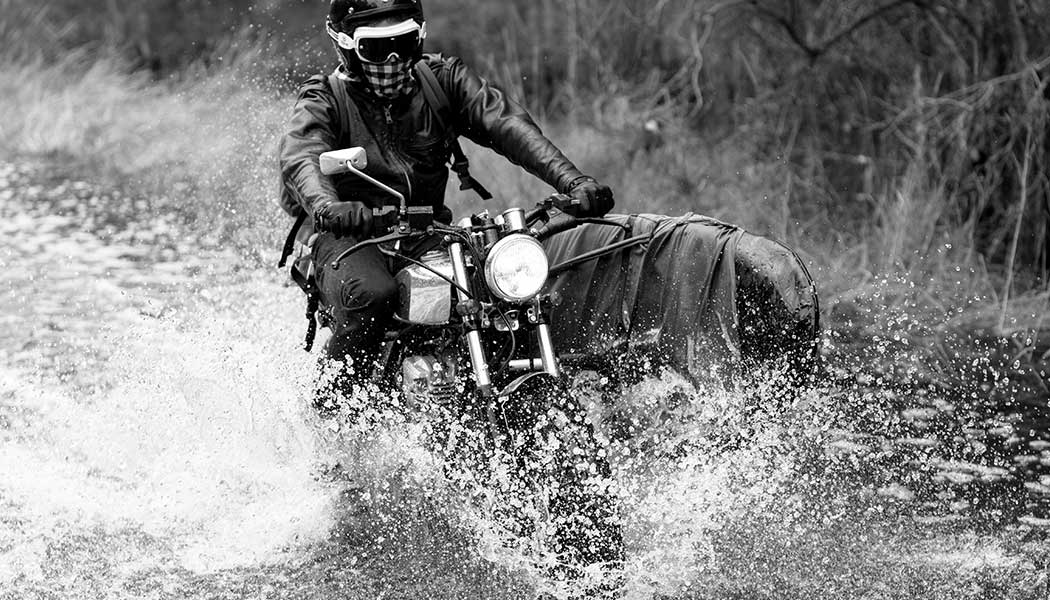 At sunrise the next morning we were roused from our sleeping bags by the sound of laughter. For the first time ever, Husni experienced demeaning calls from a flock of Kookaburras. As it is most mornings for us, our first priority was surf. One of the boys had already coaxed last night’s coals to flame and a quick cup of coffee was served before we ran down to the beach. After Matt managed to find a tube and the rest of us got our fair share of rides, it was time to move out. By nine o’clock we’d packed up the campsite and rolled back onto the Pacific Highway.

We headed north with one of our favourite east coast point breaks as our target. The rains had let off and we rode fast and dry. We noticed paddocks that had turned into lakes, confirming the squalls we’d dealt with in the south had hit just as hard up north. When it rains here, it pours.

The road to the coast from Kempsey had been closed for a week before we got there. It opened for us, with only a foot of water to negotiate. Here, those of us on the bikes found out what it was like to be really wet. One of the boys attempted to gas it through the floodwater and ended up wearing wet boots for the rest of the trip. After three klicks in the wake of our old van, we rolled up to the point and surfed in the same brown floodwater that had drenched us so thoroughly on the way in. 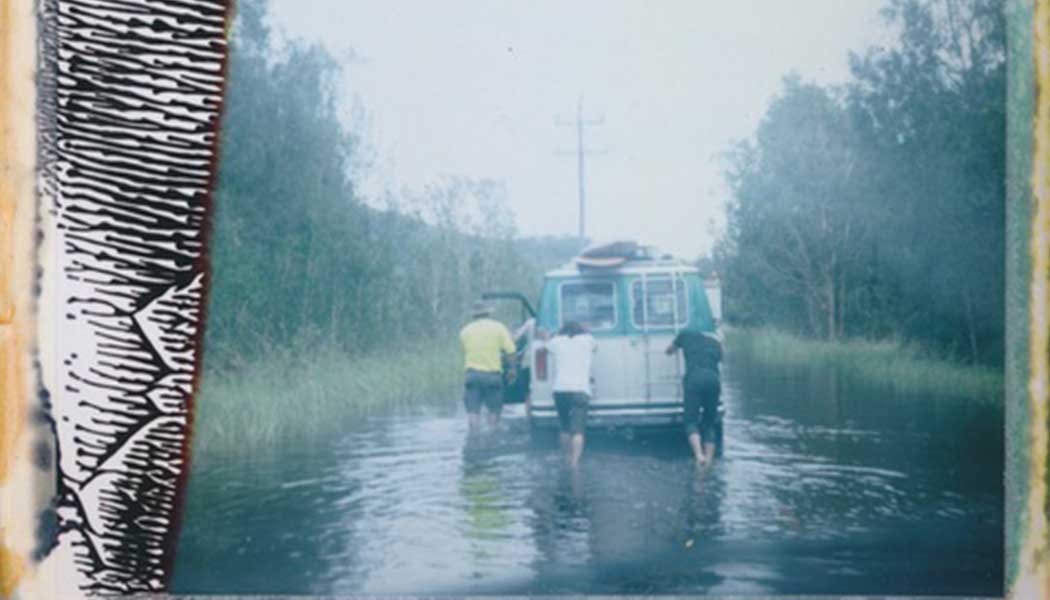 After a couple of soaking wet days on a motorbike, our whole rat pack was beginning to question whether the ride to Noosa was really a great idea. But as it happens with surfers, when the sun finally did shine and we found a fun wave – all of our worries were forgotten. The conditions weren’t perfect, but it gave us all a chance to ride something other than a motorbike, and my bum was starting to get sore

This may not have been the ultra modern, all-time-swell forecasted style of surf trip, but we were getting wet and having a good time.
After a few noserides, a whole lot of paddling and another night in a tent, we made our way back out of town to resume the ride. The sun was out in full force for the first time since we’d left our friends behind at Camperdown. Things were full throttle until we realised that to get back to the highway, we still had to navigate the floodwater. 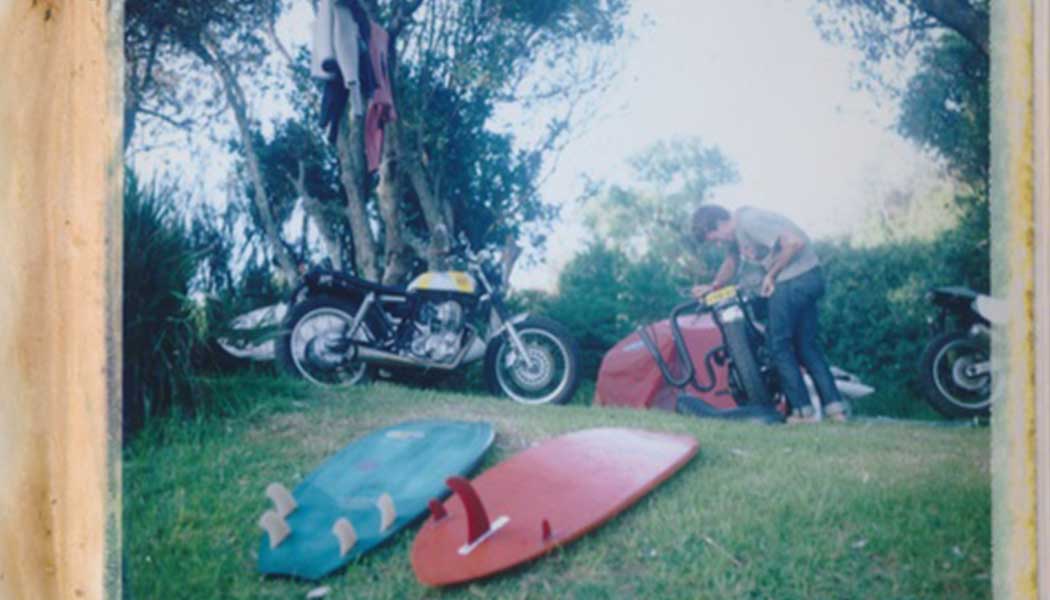 This time, our convoy came off second best. The van got wet where she shouldn’t have and skipped a beat mid-crossing. Luckily, she didn’t blow her load. The same guys who’d stayed dry the day before had to join us in the wet and push until she came. We let her relax for a moment before she kicked over and started moving again.

Next stop, Byron Bay. On we went, up the coast of New South Wales, happy to no longer be stranded.

On that cool, sunny afternoon, the ride from Grafton to Byron Bay was pure bliss. With van in tow, we rode along the Clarence River, holding tight for the huge gust of wind each time a road train passed. Our excitement increased as we punched through each town, knowing that once Ballina was behind us, we were on the home straight.

I’m not much of a believer, but the green hinterland around Byron Bay is how I imagine God’s country. Riding above the grassy hills, soaked in sunshine with a view of the ocean, it felt brilliant to be back in familiar territory. To Husni’s delight, we pointed out Lennox to the south and Byron to the north. The Broken Head turn-off took us from the highway towards the Pacific Ocean. From there we melted into the slow moving Byron Bay traffic, riding into town behind a pleasant smelling tour bus returning from Nimbin.

On the main street we were welcomed by the sound of bongos and didgeridoos. Avoiding it completely, we rode to the beach and saw what it was that we’d come so far for. From The Pass, all the way to the Shipwreck, perfect waves were spinning along. With only shortboards on the bikes, the faster, spinning peaks at Clarks were the go. We paddled out still full of adrenaline, and surfed until fatigue caught up with us. 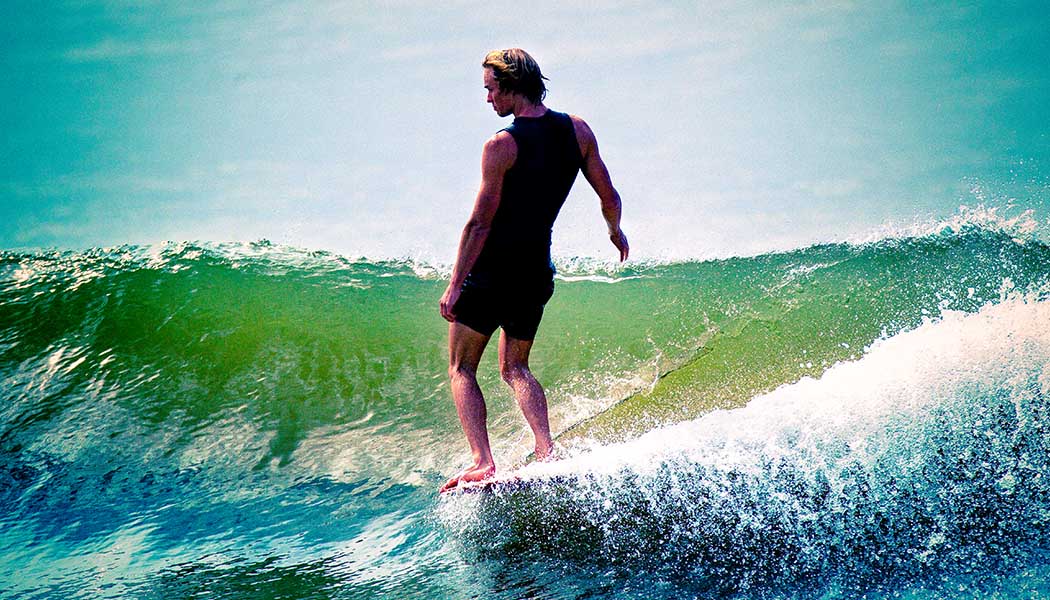 Two beers later, feeling luxurious, we were fast asleep in a house at Suffolk Park. 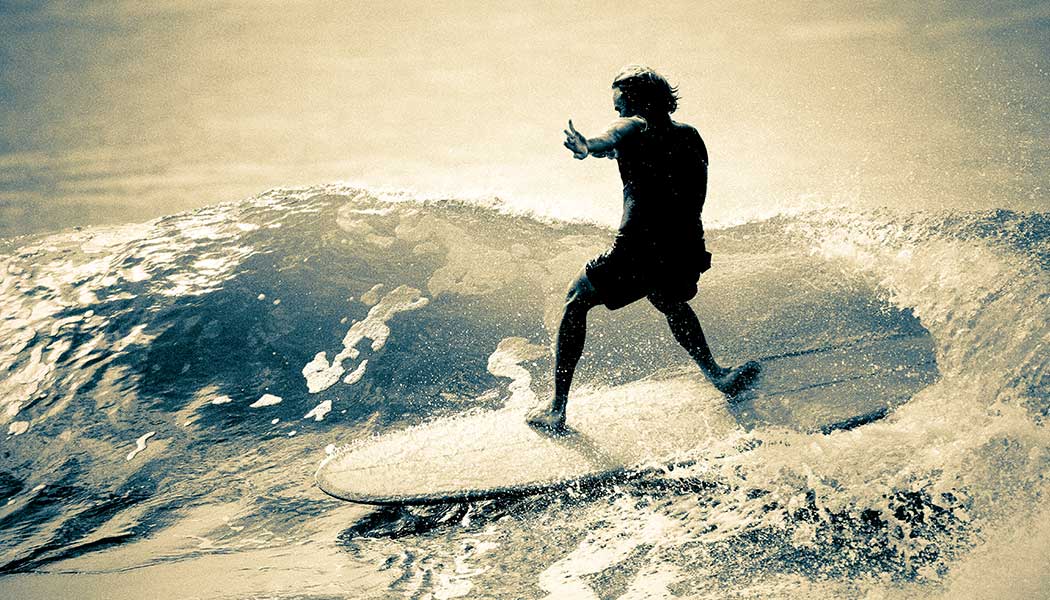 Byron Bay and its eclectic group of locals, wandering hippies, and backpacker places are always interesting to visit, but this road trip wasn’t dubbed North to Noosa so that we could lose our mind around the Northern Rivers.

After a couple of cozy nights in Suffolk Park we were itching to be on the road again. We left Byron and its grassy hills – our final destination just four hours away.

No time to visit the Gold Coast, our boards are too weird to be appreciated around the Quiksilver Pro. We were on a direct path to Hastings Street and First Point, Noosa. Once we’d left the Bay, we were content with the knowledge that on this day we would finish our voyage. After five days, three million rain squalls, one flood, and more than a thousand kilometers on two wheels, we finally made it!

Matt Cuddihy and I were home. Husni Rihwand had at long last arrived at the place of dreams. We rode straight to the points.

Here, at the end of our journey, we found the best waves we’d seen since leaving Camperdown.