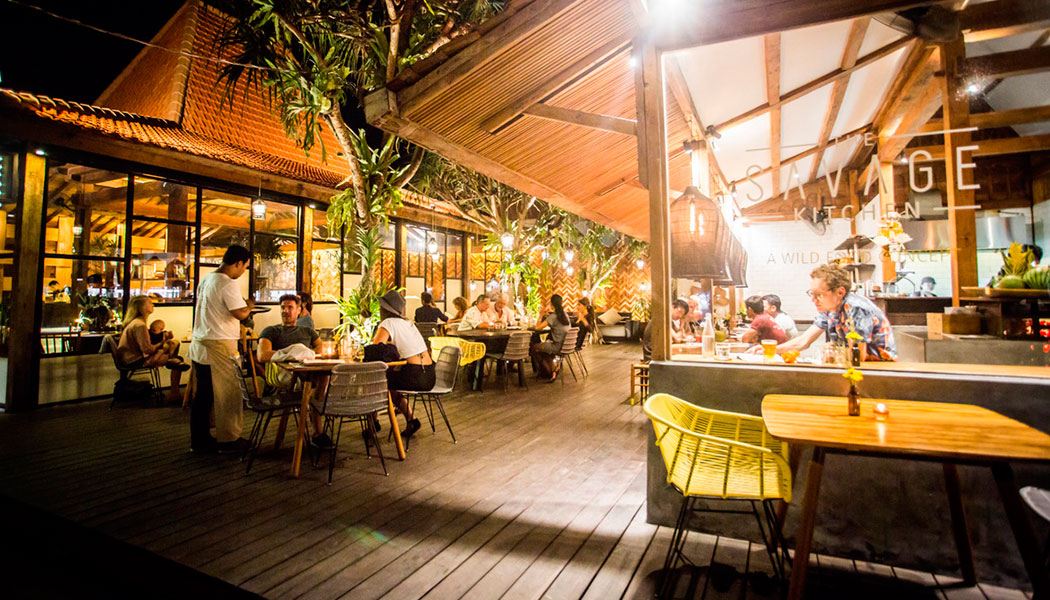 Savage Kitchen is a gourmet café by day . . . but by night it has all the light and shade of fine dining without the price tag, or the fussiness. Bravo, says Sarah Douglas.

Don’t you love it when life throws you a curve ball, especially if it turns out to be a fabulous surprise? Turn a corner and come across a street party, look left and find some amazing graffiti, happiness is really about a series of small things.

This is what happened when I went to visit Savage Kitchen in Canggu and came across a delightful Frenchman who has been transplanted from one of the most famous Paris kitchens to take over Savage Kitchen’s bistro, located behind the well known Savage Kitchen. Who knew it was there? I didn’t. 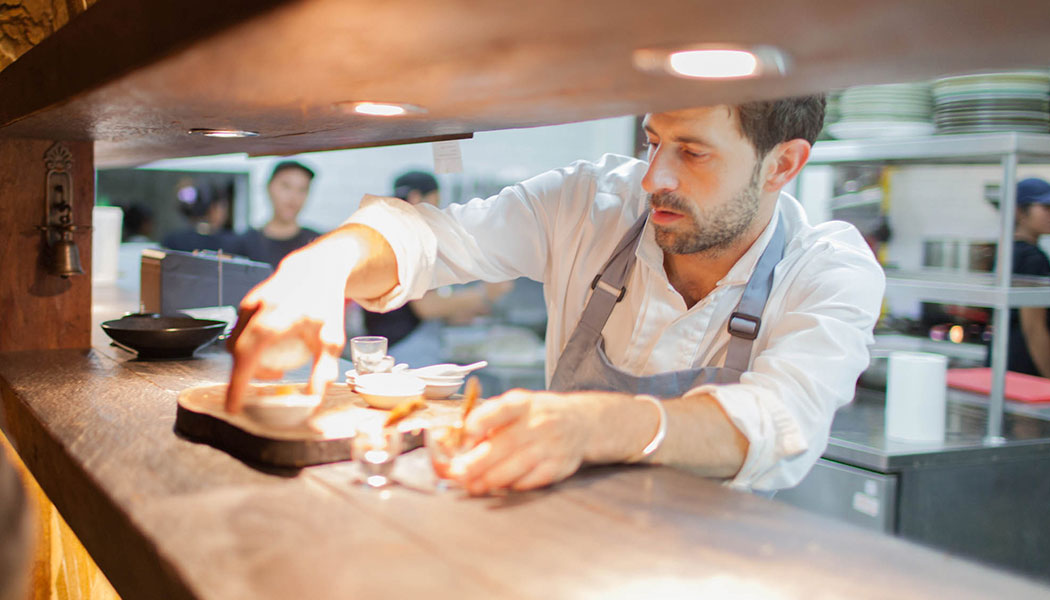 Antoine Ferrier is the chef. He oversees the Savage House, so both arms of the restaurant. Savage Kitchen at the front is bright and breezy, famous for their self-styled combos of protein + salad + sides and a delicious café menu, it’s healthy, delicious and popular.

At the back is a different story. A sleek restaurant space, decked out with long tables, low sofas, with a cowhide wall, wood, cement and bamboo pendant lights, it’s a beautiful air-conditioned dining room.

Chef Antoine was called to work here from Guy Martin’s 2-Michelin-starred restaurant, Le Grand Vefour. Having spent a lot of time in Bali, a good friend of the owners of Savage, he decided it was time. 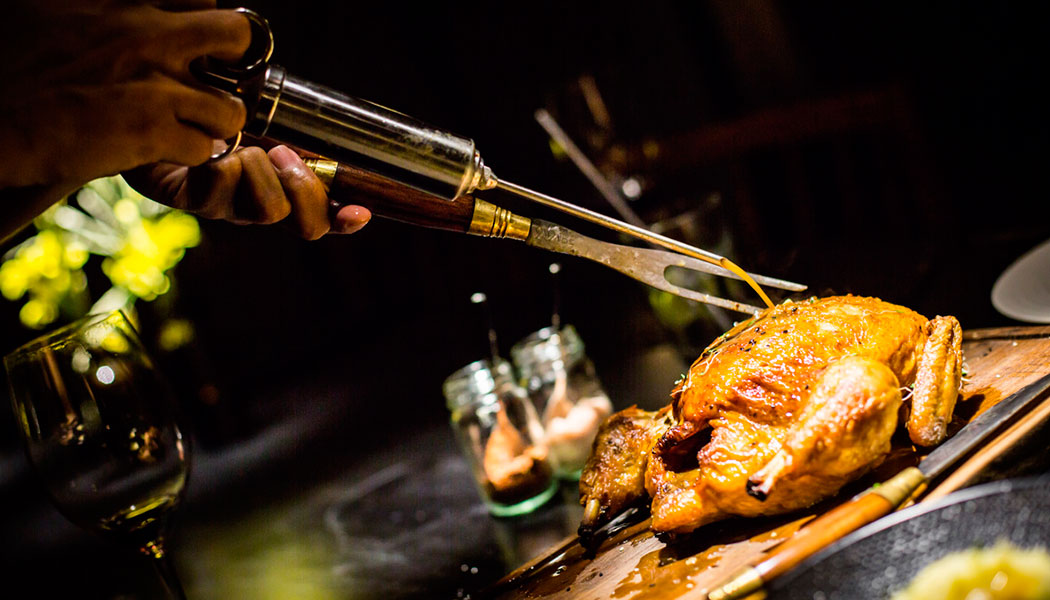 If Savage Kitchen is a gourmet café by day, by night it has all the light and shade of fine dining without the price tag, or the fussiness. There are some tempting sharing options on the menu that include a 3kg leg of lamb, a rib of beef, an organic chicken flavoured with lemongrass and a whole roasted fish.

“We aren’t in Seminyak so we have to be more conscious of the price. I want to keep the dishes affordable when I can,” explains the Frenchman. He’s not holding back on flavour though, there were a lot of things on the one page menu I wanted to try.

As it was late afternoon and I hadn’t really come to eat, I was convinced to sample one dish; a smoked butterfish with lotus chips, a citrus caramel and an avocado puree, I could see why he had suggested it. 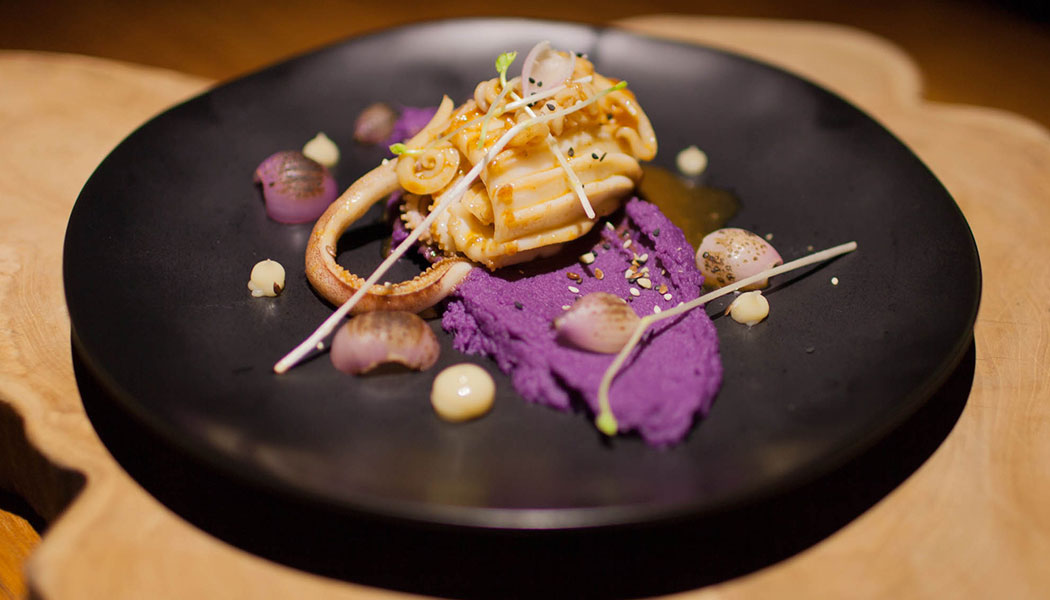 Butterfish is a very fatty fish, which is why it is so full of flavour. The fish had been smoked and then warmed with a torch. The lotus chips provided a beautiful textural element and the bright green avocado puree together with the citrus caramel was sublime and yet intense. The plate was a picture in the making. Instagram here I come.

Striving to maintain a clear identity in a market where new restaurants open so frequently is uppermost in Chef Antoine’s mind.

“You must have a very clear identity to stand out when new restaurants are opening all the time. I have to ensure that my diners are happy as well. I have to include some vegan dishes, even though I am not a vegan. It is my job to be creative with those dishes, to make sure my vegan customers have a great experience.” 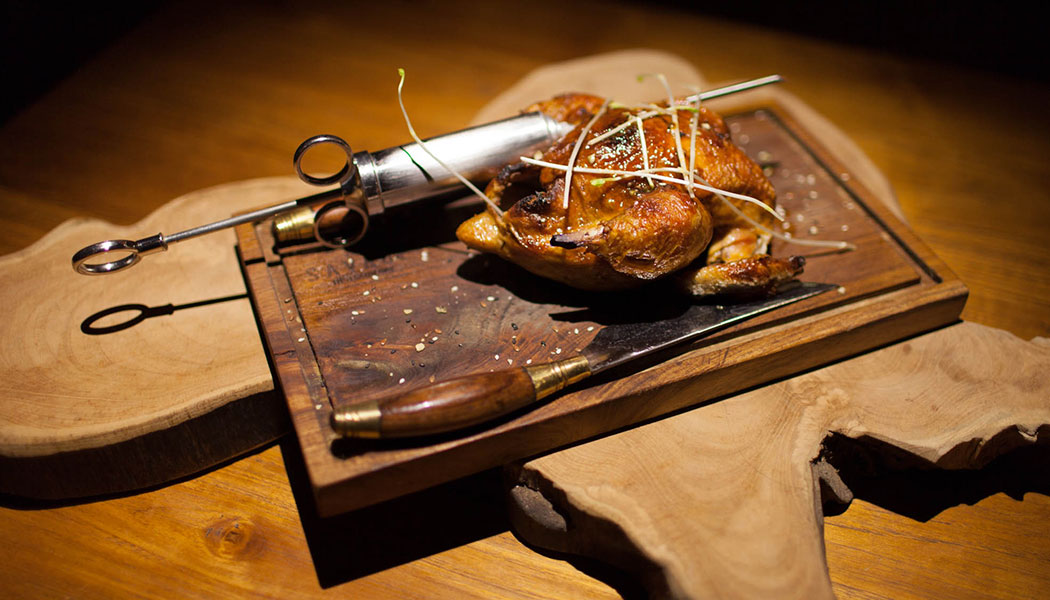 His menu features a tofu steak flavoured with sesame that he says is delicious. I’ll take his word for it. I’m not a vegan either, (see The Butcher’s Club review in this edition).

He’s launching a new menu that will have a risotto for vegans that really does sound delicious. Made with arborio rice, asparagus three ways, vegan stock, cashews and capers, vegans will no doubt find this a winning dish. A vegan main course is also always on the menu, both out front and in the back.

With that out of the way, we go on to discuss the finer things in life. There is an absolute French pedigree running through this menu and currently he is working on a new entrée that comes straight off the pages of Le Grand Vefour’s menu; a raviole with foie gras. Now you’re talking my language.

“I don’t want to pretend this is my dish, it is absolutely not. I give credit where it belongs,” he explains. 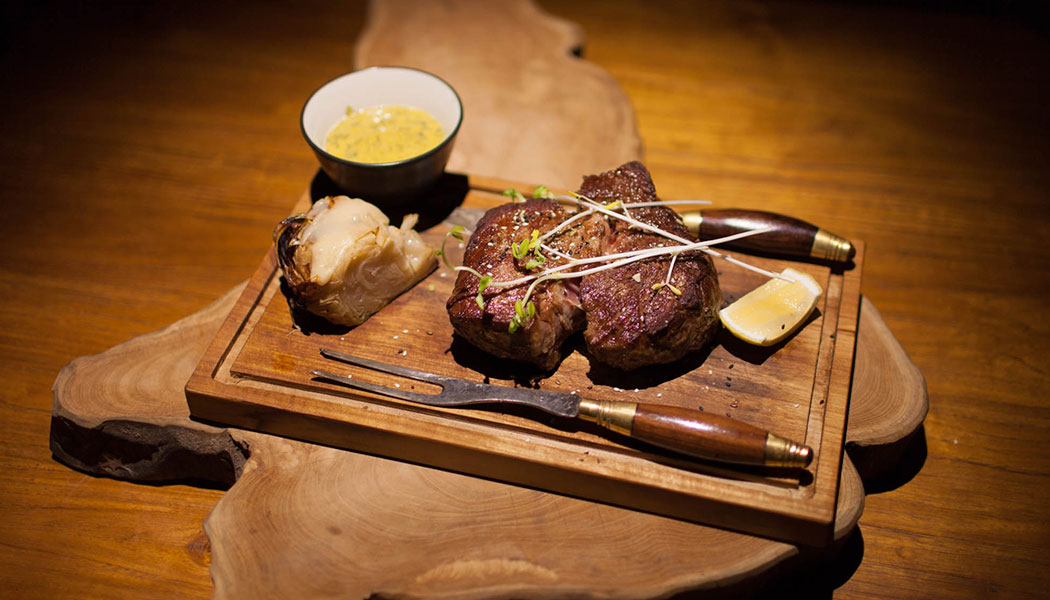 He is amazingly humble for someone who has come from an haute cuisine background. Clearly the man takes a lot of time over his sauces, his technique and his ingredients, all of which makes for something a little different for Canggu, where smashed avo and smoothies reign. Luckily they have all that and more at the front.

Antoine has been based here for eight months, although he has a home in Bali and has been visiting for years. That this restaurant is still not well known is surprising considering the quality of cooking. I could have stayed hours talking about food. The passion in the menu and on the plate is clearly there. 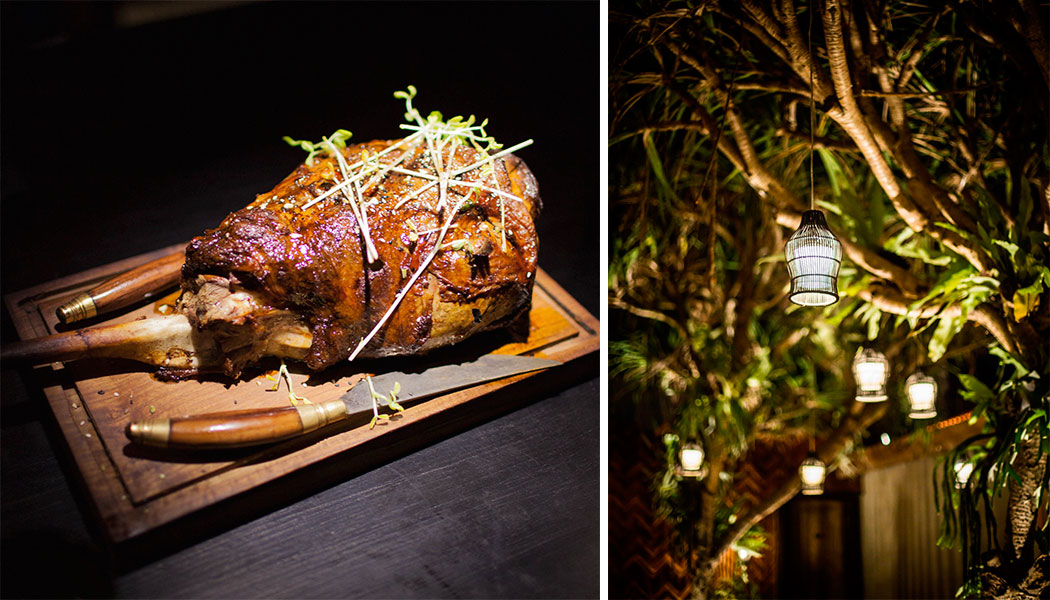 Being creative is part of his process, and part of steering the identity of Savage Kitchen’s homage to bistronomy to claim its place as a destination for lovers of French food. “I don’t follow the rules but as a chef it is my job to find creative ways to express the menu and create an identity for the restaurant.”

Despite it being late afternoon, the terrace outside is still busy with people pulling up on bikes to enjoy afternoon tea, a late lunch or early dinner. Savage Kitchen does a wild food concept by day, with a focus on healthy offerings, that also offers meat options, like the pulled pork burger, steak, fish and chicken alongside their vegetarian and vegan options. Delicious home-made desserts feature as well; some raw, some vegan, some just good. It’s a creative take on café food. Out back is a different story. 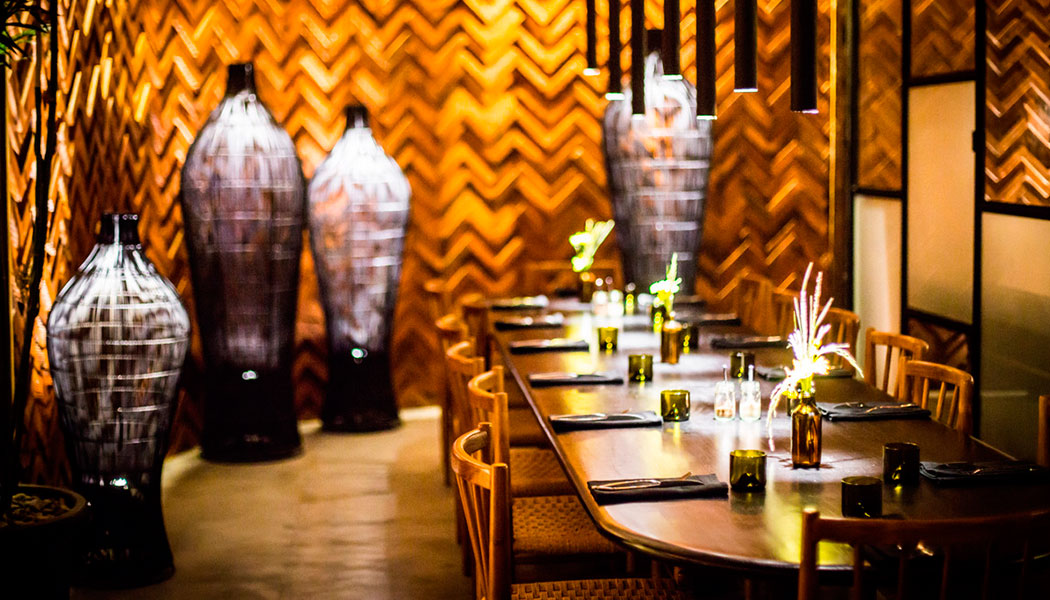 The long table in the restaurant space is made for sharing some of the larger dishes on his menu and I can’t wait to go back and try the lamb, the chicken with the twice-cooked bone broth that is injected into the roasted bird at the table, and definitely the raviole foie gras.

I will also have to try his crème brulee that he flavours with tonka beans, a bean which has a subtle flavour with notes of vanilla and almond, that he has delivered to him from France.

Running a day and night concept can be a challenge for some, but with the experience Chef Antoine brings to the table, I feel it is a mission accomplished.

•
Follow
New Year really comes with everything “newing" around us! Let’s start with @eastindiesgin who just released their small batched, craft gin called East Indies Bali Pomelo Pink Gin 🥂. Need a safe and efficient space to work? Now you can open your laptop at @setterbali Coworking Space and Private Offices in Berawa which opens 24/7! 😍 Not far from Setter, @mil.s_bali just opened in Tibubeneng (ex-Ona) with their taste-testing and mouth-watering menu. Enjoy Indonesian food with a twist at Mil's Kitchen in Tibubeneng (also in Yogya) or if you are based in Sanur indulge yourself in a bistronomy and wine experience at the newly opened @corkbali. Placating that sweet tooth has never been so easy? Grab some bombolonis or chocolates from @powderroom_r4d, the sister cafe of the famous @r4d_room4dessert in Ubud 🍰. Or if you are in Canggu, pop by @itsumotart and enjoy their collection of tarts, handcrafted soft serve and curated teas 🍵. Lastly, take the time and truly relish Bali sun sets at @sol.rooftopbali, a panoramic, seafront, rooftop bar and pool in Pererenan, alternatively enjoy the sunset with Oyster Shots Roulette at @oysterdealerbali in Batu Belig 😍🌊 The choice is always yours! #theyakmagazine #luxurylifestyle #bali #baliindonesia #baliisland #balihits #balilife #foodies #thebalibible #thebaliguideline #thebaliguru #restaurantbali #baligasm #foodporn #foodphotography #balifoodies #baliculinary #canggu #seminyak #sanur #ubud #infobali #balitourism #baliparty #travelinbali #balilifestyle
View on Instagram |
1/9

•
Follow
Golden hour is our Happy Hour! And here are some of The Yak's favourite spots from where to see the setting sun! From #Canggu, to #Seminyak, #Jimbaran, #Kuta, #Ubud and #Uluwatu! The sky is putting on an art show and you won’t want to miss it 😉 Official Sunset time: 18:47 - 26/1/23 📽️: @lajoyabali #theyakmagazine #luxurylifestyle #bali #balisunset #balibeach #balibeachclub #sunset #balilife #islandlife #explorebali #wonderfulbali #wanderlust #travelinspo #balilifestyle #baliocean
View on Instagram |
3/9

•
Follow
On Saturday, 21st January, we just celebrated Bali's 2nd "Day of Balance" or Hari Poleng 🔳🔲 Bali's black and white checkered cloth called "Poleng" symbolizes 'Balance'. The idea of "Poleng Day" is to remind us, and the world, that we all need balance in order to live well. Having been promoted across Bali throughout the year in temples (Pura) and in palaces (Puri), all the priests and kings of Bali are behind this project to balance Bali and the world. #theyakmagazine #bali #haripoleng #dayofbalance #culture #balinese #baliculture #budayabali #balidaily #balilife #balinese #baliisland #baliphotographer #baligasm #baliindonesia #explorebali
View on Instagram |
6/9

•
Follow
Welcome to the FIRST MinYak of 2023. Remember, ‘MINYAK' in Indonesian means oil, and here at The Yak our well-oiled cogs of island knowledge are here to smooth the life of LUXURY, enlightened ENJOYMENT and social gatherings… Check our MinYak to see where to stay, dine and party around the island! Link in our bio 🌴🥂 #theyakmagazine #luxurylifestyle #bali #baliindonesia #balilife #explorebali #balidaily #balibible #baligasm #thebalibible #infobali #visitbali #balitravel #balifood #balifoodies #baliguide #balilivin #thebaliguideline #balivacation
View on Instagram |
8/9

•
Follow
Gong Xi Fa Cai – 2574 🐇 Here in the western year of 2023, we welcome the Chinese Year of The Water Rabbit – 2574! The vibration of the number 2574 resonates with ‘a time of endings’ and ‘artistry’, harmony and compassion! This Rabbit year ushers in longevity, peace and prosperity and, if last year felt a little out of sorts, the incoming 12 months claim to offer opportunities for relaxation, quietness and contemplation… Just what we needed, and what better way to relax than to join friends and family to celebrate these auspicious days in auspicious ways! ✨ Catch a Dragon Dance or two; Gift friends and family with ‘hóngbāo’ or red envelopes containing money – preferably red money (100k); Share memorable moments dining with family and friends at @movenpickbali, @baiyunbali at @kempinskibali, @mauanusapenida, @kunangkunangrestaurant at @thesunofgranaryubud, @hotelindigobali, and @pistachiorestaurant at @adiwanabismaubud 😍🥳 Click link in our bio for more details! 🥂🌴 #theyakmagazine #luxurylifestyle #bali #chinesenewyear #cny #cnybali #baliculinary #movenpickbali #theapurvakempinskibali #mauanusapenida #thesunofgranaryubud #adiwanabismaubud #jimbaran #seminyak #nusadua #ubud #baliparty #explorebali #balilife #balilifestyle #balidining #thebalibible #thebaliguideline
View on Instagram |
9/9
Follow Us On Instagram