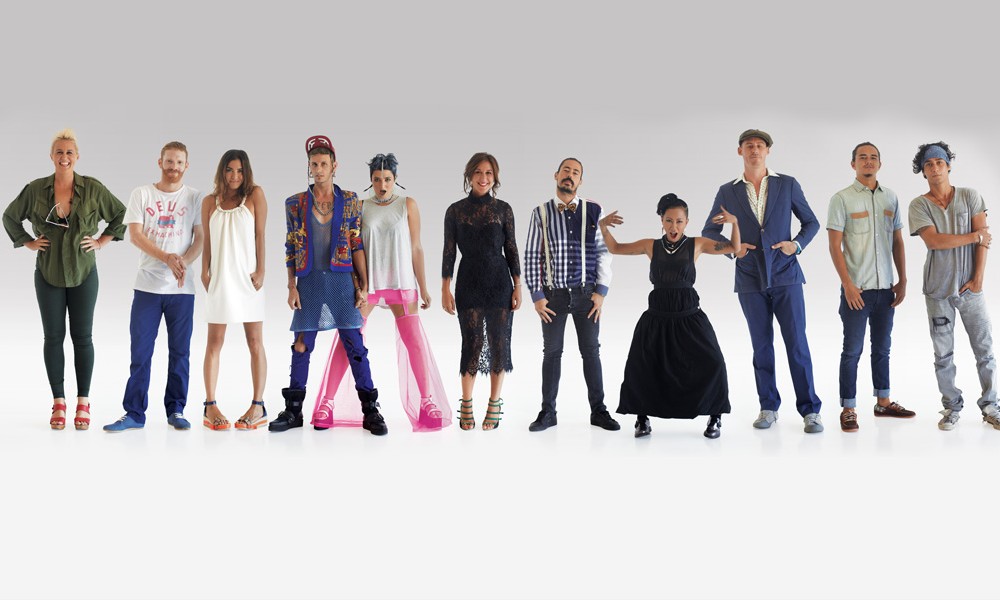 A generation of switched-on Bali youngsters who have clearly found their calling are about to make the world their oyster. Erik Baker meets Bali’s next gen kids. Styling: Christina Iskandar. Photos: Jason Reposar.

Jeren Kiring (17) – Indonesia’s National Champion Surfer:
Lombok-born Jeren has already made a name for himself well beyond the local surf scene, winning 12 major comps including Ripcurl’s Grom Search and Volcom Q Series – landing him tickets to compete in Fiji in 2014. He started paddling at age six and was noticed when he was 14 by surf legend, Rob Machado, who recognised his mature surfing style.

Bali’s own surf legend, Rizal Tangung, organised a Hurley sponsorship contract and took Jeren under his wing, ensuring that he gets to all the major comps abroad in pursuit of what seems sure to become a pro-surfing career.

Jeren’s motto is, “finish school, never stop learning, don’t give up, and follow your passion.”

Reef Doig (16) – surfer:
Living up to his name, Reef is the born surfer who commenced paddling in the waves at age four, then started to compete at age nine. After collecting a few smaller wins and narrowly missing out on wining the King of the Grom Bali competition, he triumphed in the Billabong Occy Grom Comp as the under-dog, making a real splash on the Grom scene.

Reef has been living in Bali for 13 years, attended SOK in Kerobokan and was noticed by Tai Buddha Graham of the O’Neill Team at age 14, who sponsored him on the spot. Reef rides Gunter Rohn boards and spends four to five hours a day in the waves in preparation for 2014’s junior series when he really wants to crack the Australian surf scene. He is determined to make a pro-career of his wave-riding talent and is also a keen supporter of FTW – anti suicide initiative.

With his motto, “go hard or go home”, we will see a lot of him on the global surf stage in the years to come.

Maria Castano, (15) – model:
Born in Italy to Argentinean and Italian parents, Maria spent her early childhood, and the past six years living on Bali.

Apart from small modelling gigs for friends and smaller brands, she has already done fashion shoots for Brazilian clothing brand Boutique, collaborated in arts projects and now endeavors to go to Australia after completing her schooling in pursuit of a professional modelling career. Maria has that natural beauty, the tall slender build and the spark, which tend to be prerequisites for success on the catwalk or in front of the lens.

“I would like to expand on my modelling, getting in with the right agency is the next step,” she says.

India Mercer (16) – photographer:
India was born in England, grew up in Singapore and has been living on Bali for the past three years. Her mother’s passion and career in photography meant that she grew up amongst cameras, but only focused on a creative pursuit behind the lens a couple of years ago. However, the talent had surely rubbed off. India’s eye for composition and talent for the art of photography inevitably led her to a run of assignments for a number of labels including Glasses & Bowties. Although she enjoys fashion and product photography, she is more passionate about portraits and working in natural light, but really comes to life with digital enhancement of her wide range of images.

“I like to use this mixed medium to express my creativity and to share how I view the world”, she says. In short, she has the makings to forge a career with her artistic passion. An exhibition is in the planning …

Luciana Correa (17) – musical actress:
Luci started performing when she was just six years of age.
“We did Annie in grade two and ever since then I have been hooked on musicals,” she says.

Born in Argentina, she has been living on Bali for the past 11 years, and is currently working on a production of Grease. She is determined to attend London University in musical theatre in pursuit of her dream – to one day perform on Broadway. Her years of training are immediately apparent, and with all the talent in place it is hard to imagine why she should not make her dream a reality. Her role-models are Leonardo DiCaprio and Johnny Depp, whom she admires for their ability to slip so fully into their character and mold to it.

With her voice and dance moves as strong as her characterisation, Luciana’s motto of, “go for it, even if you are scared”, is sure to help her carve the stage career she is dreaming of.

Achyuth Jaigopal (17) – guitarist:
At age nine this virtuoso – born in Kerala, India – picked up his father’s old guitar and replayed the chords he had heard him play … only much better, and the bond with the strings was instantly obvious. He started to take lessons, excelled, and went on to study classical guitar.

Fast – forward eight years and Achyuth has just completed grade eight, the highest level at Trinity of London, recorded his own version of Andy McKee’s finger-style piece Drifting and is the lead guitarist of newly formed six-piece band, Nasi Campur, which has already toured India and performed at venues across Bali.

Achyuth, ‘AJ’, writes his own material and performed solo to audiences of 5,000-plus, spreading his positive message through conscious music at events such as 1 Billion Rising and M.A.D. Festival. With inspiration drawn from artists like Andy McKee, he is set to make his talented passion his career path. His outfit is already booked to play alongside Michael Franti as part of the Soulshine Festival at the Green School on December 27th & 28th.

Seeing him play and be at one with his instrument it is obvious that we are destined to see a whole lot more from this young guitar whiz. Check out www.youtube.com/user/AchyuthJaigopal

Zoe Collier (16) – singer:
California-born Zoe took to singing because of her parent’s love for music and has lived on Bali for 11 years. She has been singing ever since she can remember, and has worked with a professional singing coach from Centre Stage School for Contemporary Music for the past three years. Zoe has not only found her genre – doing covers of the likes of Adele, Amy Winehouse and Christina Aguilera – but started to find her own voice too.

Her raspy soulful voice cuts through with a depth unlikely in such a young singer.

“I would love to make singing my professional career for which I will have to go abroad after I finish school,” she says.

Once you hear her sing, you’ll know that Zoe is a talent destined for stardom …

Tristan Iskandar (17) – skater:
Long time Bali resident, Sydney-born Tristan caught the skate bug at age three from his older brother, Alexander, who was already sponsored by Insight and Volcom at age 14. From his early beginnings and apart from a two – month break following a 12-step kick-foot attempt that landed primo and twisted his ankle, he has spent an average of five hours a day on a deck … of which he snaps quite a few.

Post his Insight sponsorship in Oz and about 60 snapped decks later Tristan has won five comps including Indonesia’s Motion Boards Street Skate Competition and is in pursuit of a serious skating career – desperately needing a sponsor as he goes through too many decks and tracks for his pocket money to fund. With an innate talent (that runs in the family) and a passion for the art of skating, Tristan is set to hit the comp circuit full-time once he finishes school.

“I love skating, it is what makes me relax, go with the flow and be at one. It’s like a meditation really.”

Putri Cardinale (17) – artist:
Born in Bali to American and Balinese parents, Putri has been feeling somewhat lost between the cultures with the religious clash of Hinduism and Christianity fuelling much of her artistic expression, which she has been into for as long as she can remember.

“Being shy, I have always used art as a medium to express myself and to share how I felt growing up with this duality of traditions and rituals,” she says.

Now, Putri reads Buddhist texts and other religions too – she says that religion makes such a fundamental part of a culture and society, “that’s why I like to explore them”.

Her artwork is deep, meaningful and surreal, filled with lucid imagery of hands, bodies, and faces that are deranged, detailed, charismatic and expressive.

“I prefer inkpen over pencil as I like working with my mistakes. They make my works interesting and add to the character of the drawing”, she says.

Flicking through her work, it quickly becomes apparent that she is a great artist in the making. Pages upon pages filled with imagery of ink and coloured markers blend with photos that have been reworked with ink, written word collages with mixed mediums, self-portraits with hand-drawn patterns and a plethora of symbols that all shed light on the cultural disparity of her heritage and upbringing.

A keen observer of people and the world around her, Putri’s works speak loudly of the cross-cultural dilemma – her own and that of others too.
Her first big exhibition is set for February 2014 and will display her works from the past two years of intensive projects – most of which were undertaken at Ghandi International School where Putri is in year 11.