Legendary Bra Boy Koby Abberton has forged a life worth living from the fire of a turbulent youth. He spoke to Sarah Douglas about his past, his beautiful present and how he helps brothers less fortunate. Photographs: Saskia Koerner. 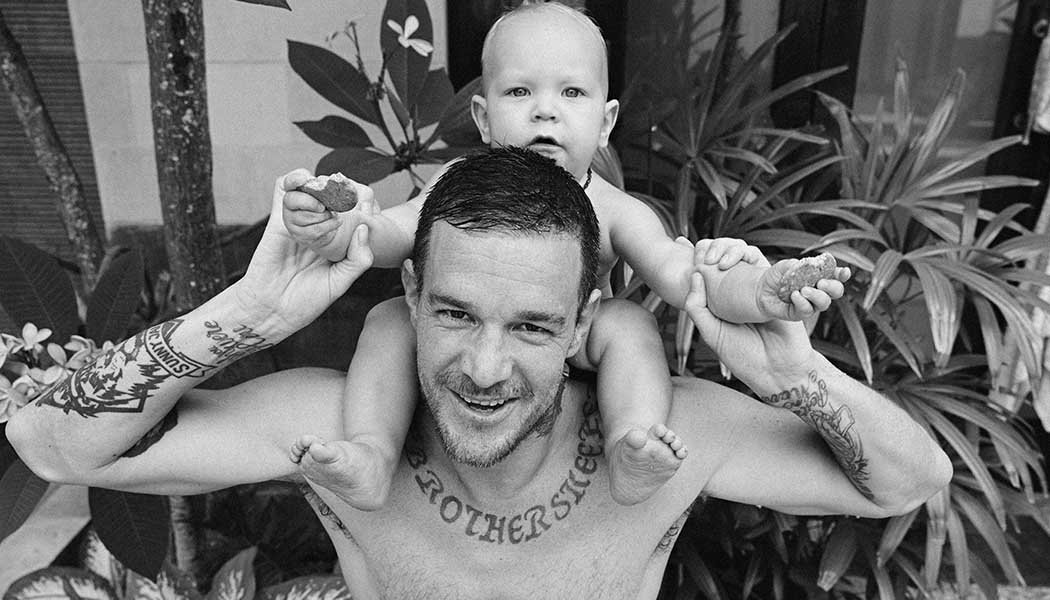 Koby Abberton has spent his life looking over his shoulder; for the next blow, the next big wave or the flashing blue lights that signal trouble again.

Much of his life is tattooed onto his skin and most famous of all his tatts is the one imprinted around his neck: My Brother’s Keeper. The story of Cain and Abel was retold to Koby Abberton by a friend who spent time in solitary confinement in Sydney’s notorious Long Bay prison, a shadow on the now famous beach suburb of Maroubra where Koby and his brothers grew up.

Cain’s refusal to give up his brother to the Lord resonated with a young Koby who claimed it and had it printed on his skin. He believes it is the first chain of command tattoo ever, designed to inspire a gang of young men to take up the call and become what we now know as the Bra Boys, the infamous surfer gang, the brotherhood. 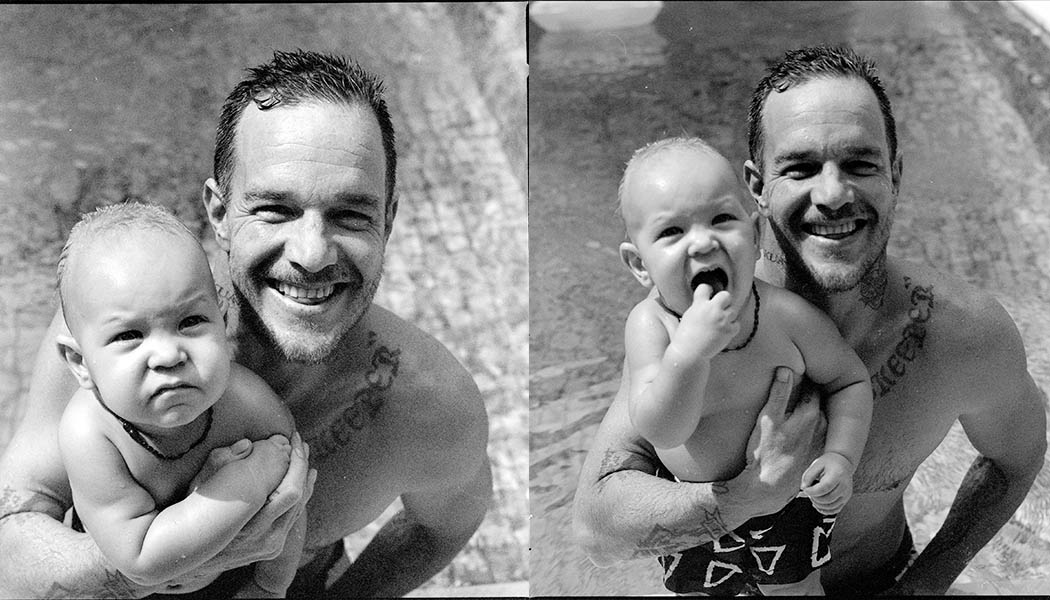 Maroubra is a beach, it’s a call to arms for a legion of young boys who grew up in broken homes, wracked by violence, drugs and poverty. With little to call home they gravitated to the surf. It became their friend, their nemesis, their stage.

Perched on a cliff overlooking the waves of Bali’s Bingin Beach, today’s Koby Abberton seems a world away from the wild boy he was. With a beautiful partner, Olya, and a baby boy, Makua, at his side, he still tells harrowing tales … but the worst of them are no longer his own.

“I get messages every day from kids in trouble. They reach out to me and if I can, I’ll drag them off the ledge. I could convince kids to do anything and these days the thing I’m most proud of is the work I do with suicide prevention,” he explains.

Koby Abberton understands those boys better than most. He was that boy who could have died trying to make sense of growing up with a drug addicted mother, a string of violent boyfriends, friends and brothers who were always on the wrong side of the law, with little hope of a future or redemption.

“I just tell them if you’re willing to die anyway, then go out and do shit. It may not be right, maybe it’s fucked up, but I get them to go out and try things, put that energy into something else.”

He has no idea how many he has helped but through his mate’s organization … thousands have been pulled away from the edge.

The Bra Boys have forged a reputation for standing up for each other and keeping all threats out, including the police and local drug dealers. The Cronulla race riots first saw Koby Abberton and his brother’s hit the TV screens when they met with rival gang leaders and forged an agreement to keep gang wars away from the beaches and out of Maroubra following violent riots on nearby Cronulla Beach. 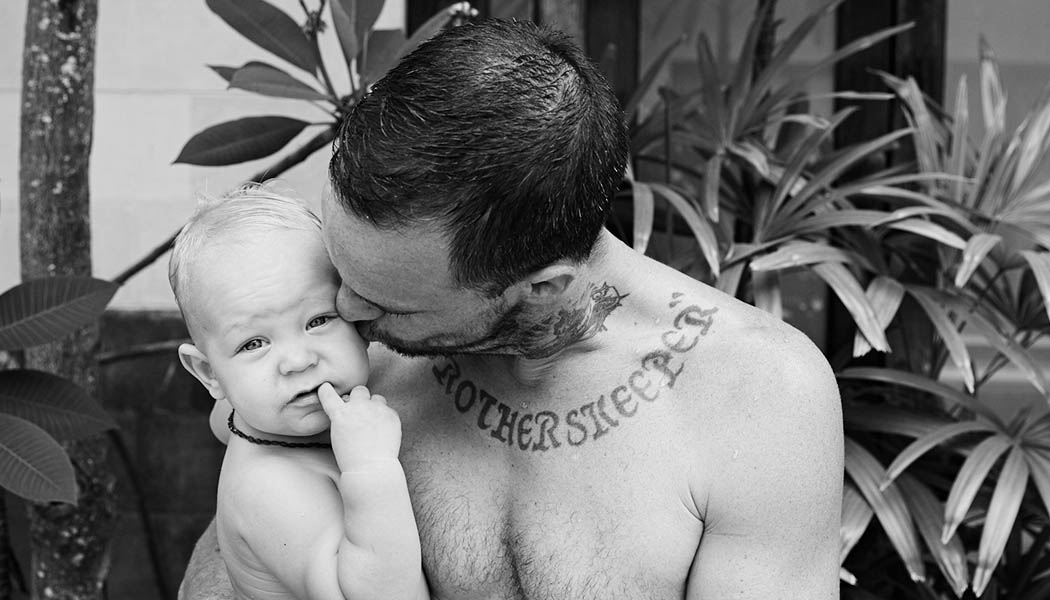 “The reason why it’s not happening at Maroubra is because of the Bra Boys. Girls go to Cronulla, Bondi, everywhere else in Sydney and get harassed, but they come to Maroubra and nothing happens to them. I read all this stuff about kids getting harassed because they want to have a surf and I say ‘are you kidding?’ The beach should be for Aussie kids. But if you want to go to beaches and act tough in groups you better be able to back it up. If these fellas come out to Maroubra and start something they know it’s going to be on, so they stay away,” he famously told newspaper reporters following the riots.

Where he draws the line is hard drugs and despite all he saw growing up he found himself addicted to prescription painkillers after breaking both legs diving off a cliff.

“You think you know better but sometimes shit creeps up on you and before you know it, you’re where you said you’d never be,” he confesses.

His dark days are well documented, growing up rough, finding the waves, attracting sponsors, riding high and then finding himself in court accused of having knowledge of a murder committed by his second brother, Jai.

“Yeah, he got off on self-defense and I got a suspended sentence for not seeing him. He was there but it was dark and I knew something was up, so I threw him out. But hey, I didn’t see him, and that really pissed off the coppers, they threw everything at getting a conviction and they got nothing in the end.”  What am I, my brother’s keeper?

The film documents a lifetime of wrongs that may yet turn out right.

Koby plays with the big boys, many of his closest friends are famous surfers, businessmen, sports stars and just as many are ordinary boys suffering the same kind of wrecked life that he himself endured.

He first came to Bali when he was 14. He hated it. Was ripped off by a taxi driver on his way from the airport and hoofed it to Sumbawa where he found near perfect waves and a generation of surfers who showed him the way.

By the time he was 16 he was coming regularly to Indonesia to make surf movies, they made 10 in all and the Indo life got into his veins.

Fear has never played large in the life of Koby Abberton, at one time the world’s most famous big wave rider. He never had a lot to lose. Growing up in a home broken by drugs and violence, he was one of four brothers who lived on their wits and found solace in the waves that crashed on their local beach.

The question of who’s going to save you was answered for Koby at a young age; “stick together and we’ve got a chance”. Along with his two older brothers, Sunny the eldest and Jai next in line, they never knew their fathers and Mum was in such deep shit, she probably couldn’t help them. Left to their own devices they took to the streets, which led to the endless beach where their futures were savaged and finally saved.

Meeting Koby Abberton today, it’s hard to believe all the stories, nor his dark past. He’s unfailingly polite, soft spoken and despite the tattoos and scars that cover his body, he’s open, generous and sweet. He wants to cook for you, would give you his last shirt. He’s a saviour and perhaps his greatest challenge now is saving himself from his tattered reputation.

His son is his greatest inspiration now. He wants him to grow up with all he never had.

“I want him to have a backyard, grass to run around on and yes, some help around the house.

“Australia is too hard and I like this way of life. I also see a lost generation emerging in Australia with the ice epidemic and I do all I can to spread the word,” he explains.

“Normal kids grow up looking up to the Bra Boys and we protect the kids from the local drug dealers, in our community at home we kick their asses and we kick them out. It isn’t nice but that’s what we do.”

When his friends started a suicide prevention movement, Koby jumped on the wagon and rode it on television, through fundraisers and used his celebrity and tough reputation to reach a generation of lost boys, some of whom he has literally plucked from the jaws of death and brought to Bali.

He is and will always be a keeper of the brothers, although these days the bra Boys have new mentors and the suburb is in the throws of gentrification as rents in Sydney soar. His future is far from certain as he opens a new chapter in a salt-encrusted book but so far, despite all that’s been thrown at him, he remains surprisingly optimistic. He’s riding a wave of his own right now but the surf is never far behind. He’s at home here and friends with most of the best surfers in Indonesia and the world, he laughs at the idea of the locals heading out to compete on the world stage.

“I don’t see it, it’s too good here, the waves, the lifestyle, the help, they don’t like it when they leave and some of them are the best I’ve ever seen, but fat chance they are leaving here,” he laughs.

If you can’t beat them, join them and save the ones you can, it’s all part of the reason he’s here in the first place and maybe, why he survived when so many didn’t. The next chapter in the story of the most famous Bra Boy is still unwritten – but he’s scratched a few sentences in the sand and Koby believes the rest will write itself.