THINGS are a little mixed up here, but I think I like it. The effects of entering Luna2 Studiotel, the sleek boutique hotel located behind the glamorous Luna2 beachfront villa, are a little like stepping into a set of 2001 Space Odyssey created by a zany 1960’s hostess.

Everything is shiny and white, with a lot of orange thrown in. Wearing orange-tinted glasses and taking hallucinogens could create this sensation. So could slipping between the pages of a comic book and speaking in bubble language. I am doing none of those things, yet strangely feeling their effects.

I am here to review Orbit, the lobby restaurant at Luna2’s Studiotel. I don’t mind saying I’m getting mixed messages here but rather than making me uncomfortable, they are making me smile. I’m getting ahead of myself. 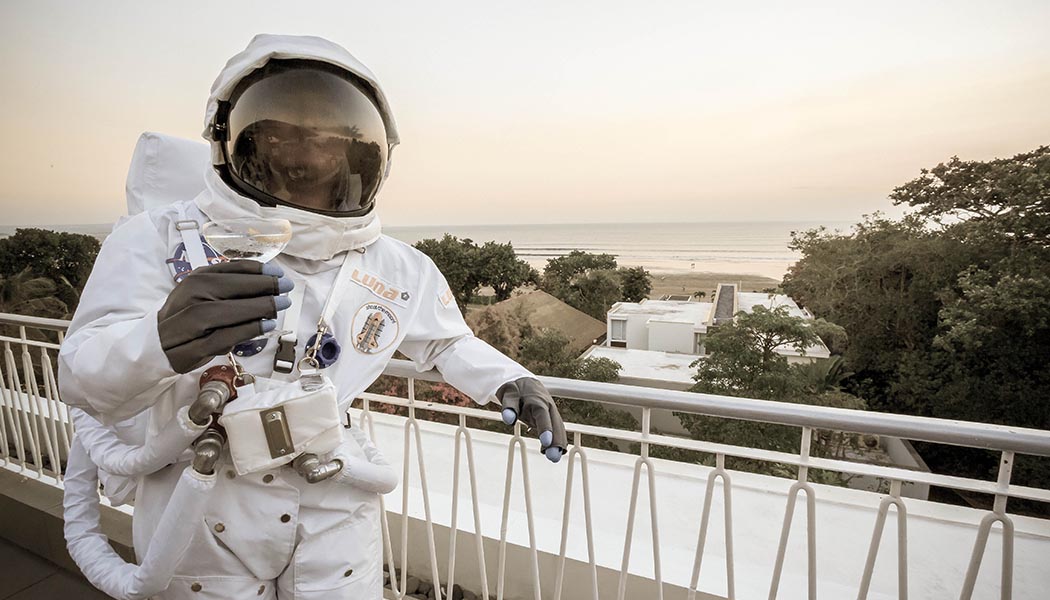 The shiny edifice that is Luna2 is topped by a rooftop bar called Space and it is here that my companion and I begin to explore the retro-speak of this boutique property.

Here we order a cocktail. My companion, being a connoisseur of martinis, declares her martini “too wet” but I’m used to hearing that. Shrugging this off I drift into a delightful espresso martini, which goes down as smoothly as the sun sets on our view over South Bali.

The canapés served with our cocktails get my attention; two miniature, buttery cottage pies served alongside two grilled scallops on the shell peppered with melting pork cheeks and a tangy dressing, that I can’t see in the dark but it’s so good, I don’t care. It is not your usual complimentary canapés but nothing is usual here, I’m beginning to understand.

Boy George is crooning Karma Chameleon as we make our way downstairs. The décor is clearly inspired by the ‘60’s, yet the music is ‘80’s all the way and the waitresses could have fled a 40-year-old Pan Am flight after it crashed into the Hounds of the Baskervilles. Somehow though, it all comes together like toffee and apples. 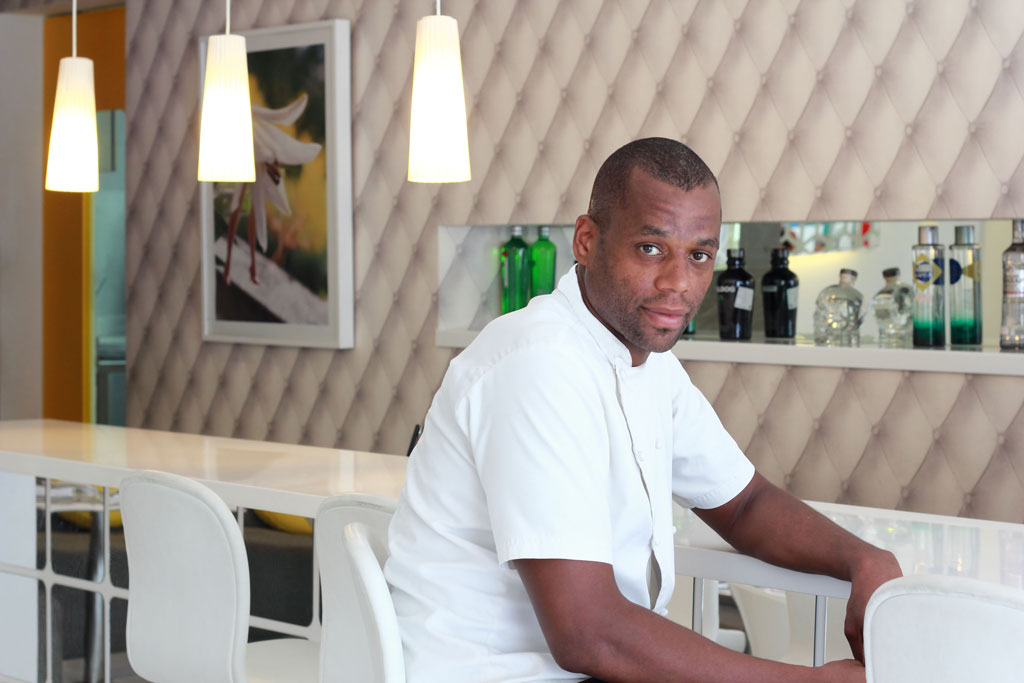 Owner Melanie Hall, an English designer, has firmly put her original stamp on this 14 studio hotel. Mixing a retro feel with contemporary aesthetics, a touch of Flash Gordon and a natural feel for hospitality, she has had a lot of fun here and it’s infectious. The in-house guests we met raved about the service and we were soon agreeing with them.

As we’re settling into our tweed wrap-around-lounge, getting a feel for the polished white surfaces offset with orange, our next surprise arrives in the form of the chef. Throw out the menus here folks because you won’t need them at Orbit.

The restaurant seats about 30 guests and Chef Errol speaks to them all. A burly black man with a strong London accent, he has worked in numerous Michelin-starred restaurants alongside the likes of Gordon Ramsey and Tom Aikens, and he looks like he may have been a boxer. Turns out, he’s shy, sweet and could not be friendlier. We also discover he has a very delicate hand in the kitchen.

Before the amuse bouche arrive, all the guests know each other; we’re having fun and swapping stories. While I imagined from the social media posts that everyone would be hipster-ish and dressed in designer tat, I discover quickly how silly it is to assume. The guests we met are perfectly nice, ordinary people, some of whom are stranded by the volcano eruption and very happy with where they are stranded. 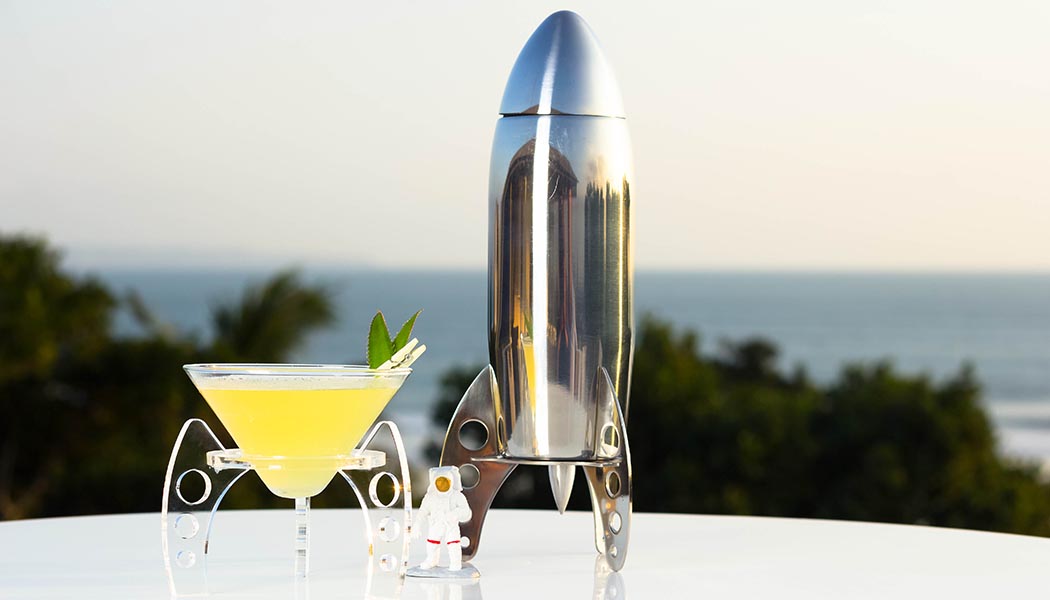 The menu appears to be created a la minute but I’m thinking there is a lot more to it than that. The creative spark however, must begin long before as some of the preparations, including sous vide veal and scallop ceviche, take a little time to prepare.

An amuse bouche arrives; tiny jewel-like pieces of truffled tuna with a halved quail egg and three precise dots of pea puree, it’s beautiful. My companion, she of the martinis, doesn’t like seafood or mushrooms and is served a single, tiny chicken drumette wrapped in crisped truffle with a creamy caramelized onion dipping sauce. You are beginning to get the picture?

The entrée arrives and it is scallop ceviche; thinly sliced and festooned with delicate little edible flowers, a dab of caviar here and there, tiny parmesan tuilles and pea shoots. It’s fresh and really fabulous and is absolutely instagram-worthy. The other entrée is a tiny slice of slow-cooked pork belly with a fruity sauce. 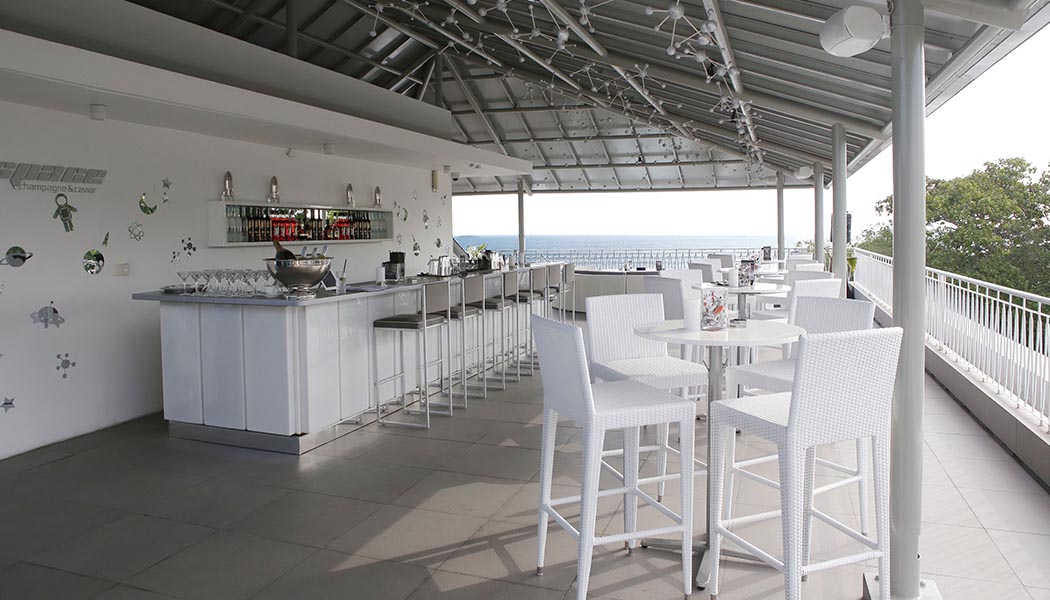 A smoko leads us out to the pool terrace and here we sit amongst the bubble furniture overlooking a 25-metre pool inset with geometric patterns etched with mosaic tiles, and a feature wall decorated with the cartoon people, yes they are conversing in bubble speak! We’re entertained by more ‘80’s classics on the surround sound speakers.

The second course arrives; a sous-vide veal tenderloin, soft, tender and perfectly cooked. It’s topped with a tomato concasse and served with a jewel-like salad with tiny enoki mushrooms and little touches of fresh flowers and peas. This erupts into a full scale discussion on the sad state of local peas, how to deal with their shortcomings etc. Spurred on by our charming sommelier, Nyoman, who has a classy, and not exorbitantly expensive wine list to draw upon, we’re in full flow now.

The next course is a rare venison chop; the full meat and potatoes course. My companion has settled into her glass by now and is busy with what wine will be next as we slice into the perfectly tender, pepper crusted venison, which is rich and filling and perfectly cooked. Food coma is approaching!

As we are technically working, we are being treated to the full extravaganza, and much of our dinner is created from the very best ingredients chef Errol can find on the island. Another reason why the dinner menu changes according to what’s available, what tickles his fancy and how his guests are feeling on the day.

We made it to the cheese course, a melting slice of truffled brie cheese with home-made crackers and fig jam, which went down a treat with the sauterne suggested by Nyoman, our new best friend. We offered some of the guests a chance to try it as well, our new friends in Orbit. We could not make the chocolate course and for that, we’ve been invited back.

Orbit is also open for lunch, where a menu does appear, but I imagine chef Errol will be happy to throw the rule book out here as well. Rather than being fussy or precious, which I had imagined it might be, Luna 2’s Studiotel is friendly, warm and so much fun, I fell in love with this quirky place. It is unique in many ways and for a small property, there is a lot going on.

There’s a private cinema downstairs, a large wine cellar, the industrial “60’s inspired roof terrace, with the charming ‘80’s soundtrack, it’s retro but modern and so much fun. I’m hanging out for my friend’s pass so I can spend more time here, I will be back.