The Art Of Surf By Andy Davis 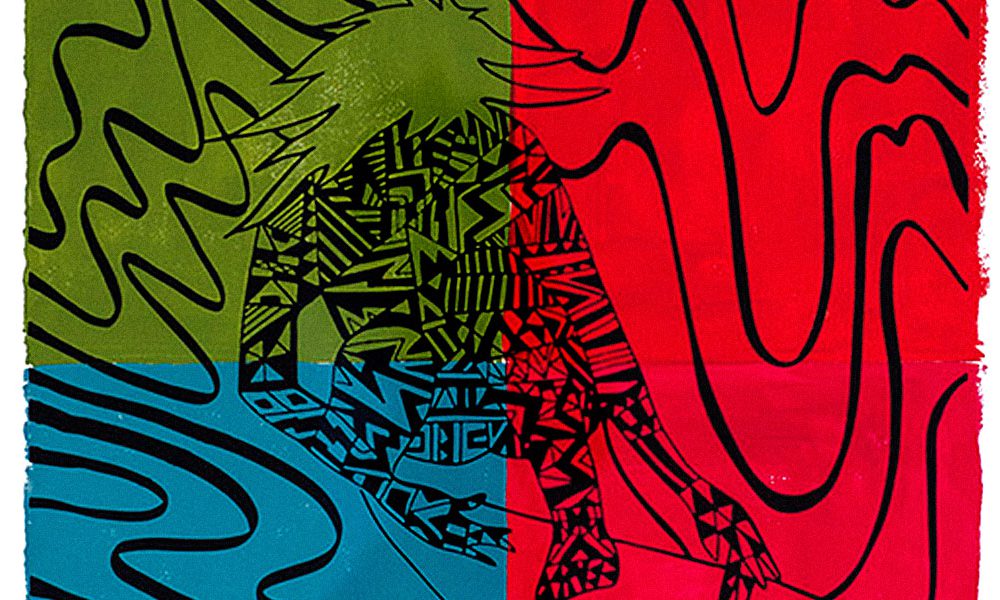 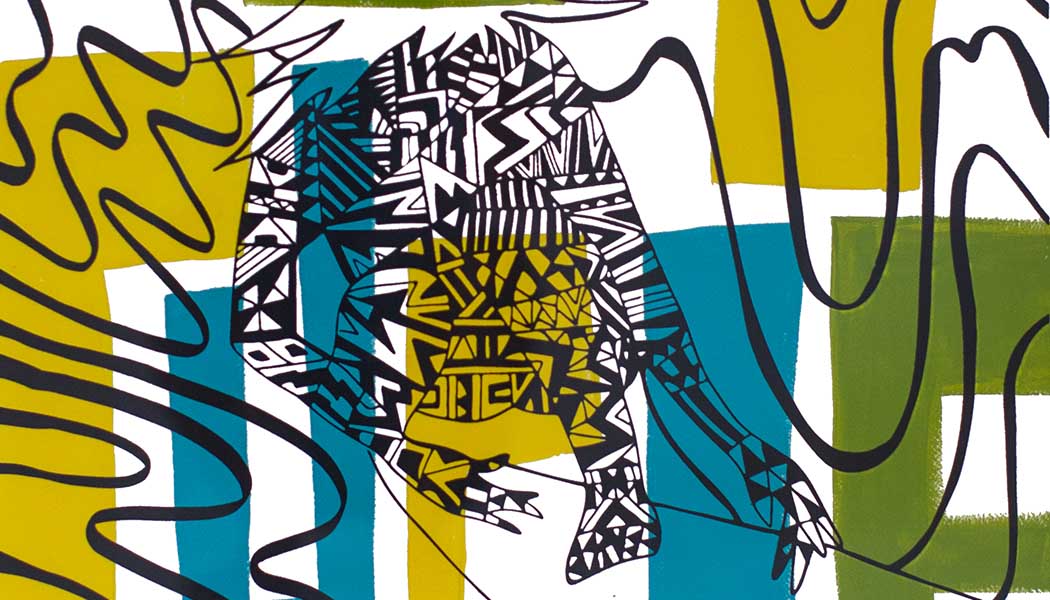 Californian surf artist Andy Davis broke free from the shackles of formal education as early as he could – following his own artistic path and embracing the freedom of being able to draw and paint any way he liked . . . writes Jack Taylor.

HANGING out with pals Joel Tudor and Dane Peterson turned Andy on to a surf scene where a nose-rider long board or twin-fin fish were the sticks of choice at a time when the surfing world was becoming swamped with skinny short boards. Twenty years later and he has created his own clothing lines like Free, Byrd and Ando & Friends, and collaborated with the likes of Patagonia, Vans and Billabong.

Andy’s artwork is his imagination poured out onto canvas and his style is defined by his abstract cartoon imagery. Figures with no faces, elongated arms and legs and polka dot waves are some trademarks of his work . . . anonymous surfers caught in their singular moment of stoke. Each piece is a daydream realised, an epic session played out in Andy’s mind, a reflection of his passion for surfing, the beach, the ocean and the lifestyle that binds it all together. 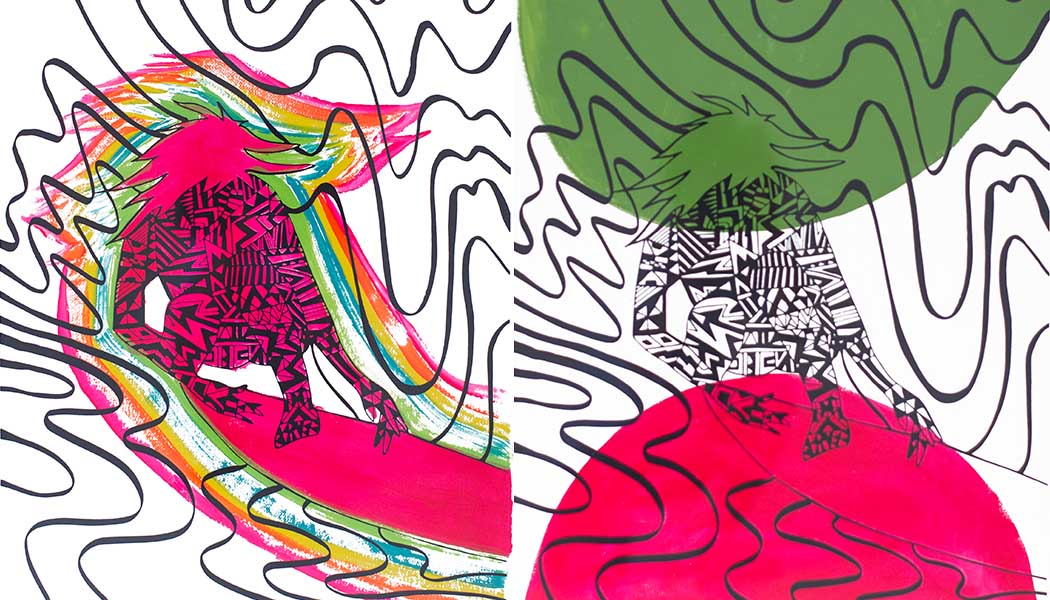 Your art has been displayed across the world, you’ve started your own successful clothing companies and you’ve jammed with some of the biggest surf brands. Was this always your ambition or did you simply do what came naturally and the rest just happened?

A little of both I guess. I always knew I wanted to do something creative with my friends that was in or around the surfing life and I wanted to avoid a career that took my time in the ocean away. 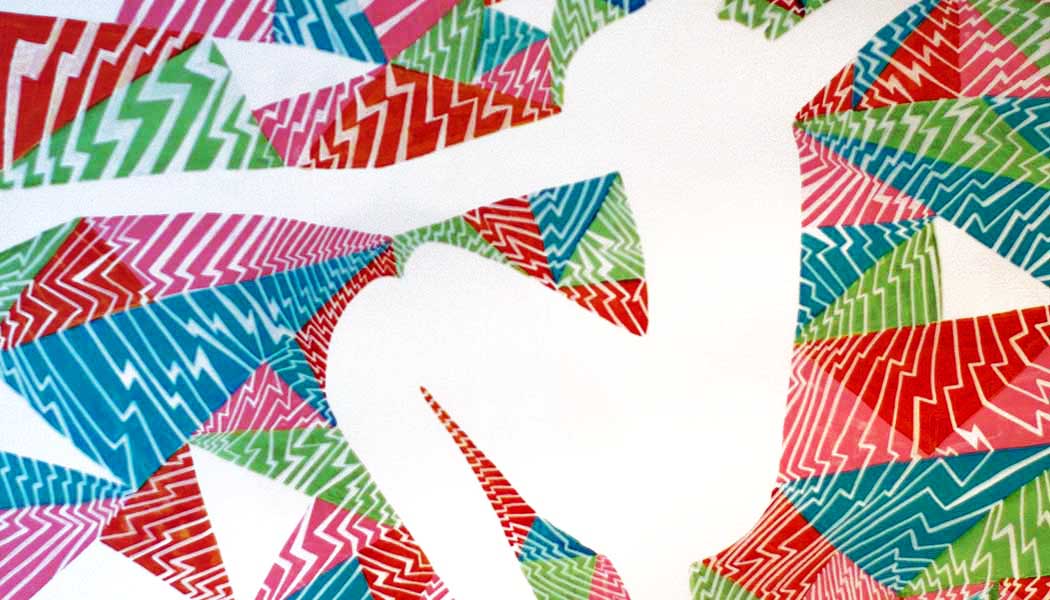 You made a choice early on in your career to move away from mainstream professional surfing and reflect another side of surfing in your art. Why?

I just wasn’t as excited by it as I was when I was younger. It didn’t move and inspire me any longer. In my late teens, which would have been around ’87-’88, I started looking and liking other things besides where the mainstream surf world was at the time. I started daydreaming and seeing and manifesting from a new place in my mind. As funny as it sounds it wasn’t drug induced either!

I wasn’t sure where it would take me but I did know it was leading me on a more abstract path. I re-ally was never really very good at conforming to what seemed to be normal for most people my age. Finish high school, go to college and then get a real job. I knew there was no way that was ever going to work for me. So I kept dreaming and believing I could do other things. 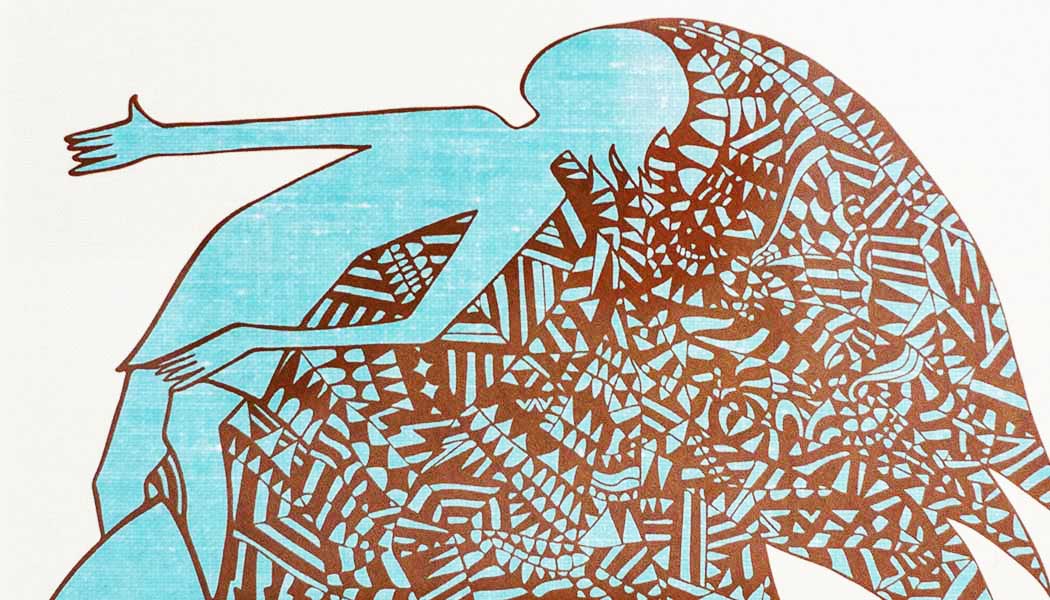 Is there anything you know now that you wished you had known when you first started out?

Not really, it’s exciting to keep figuring it out. Making mistakes and learning new things always takes you somewhere you weren’t intending to go. 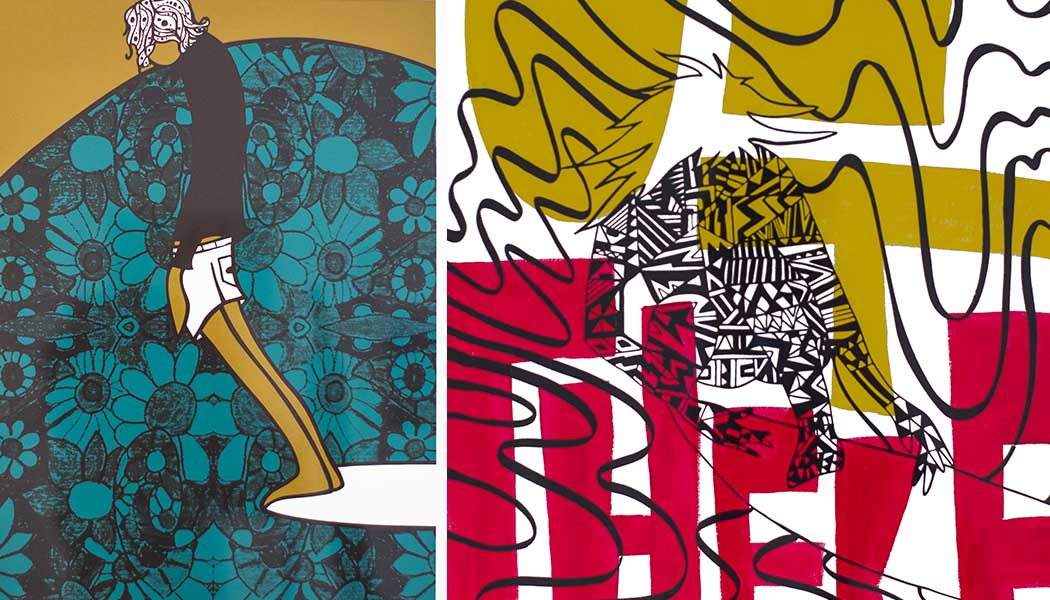 So your journey landed you in Bali, how did your hook up with the guys at Deus come about?

Through mutual friends, and word of mouth. I have had quite a few amigos tell me of their experiences at the Temple with Dustin and the crew, and it’s something I’ve wanted to have the chance to do for a few years now. I timed it well and was around for the 9 Foot and Single Log Fest at Echo Beach. It was cool to be somewhere so far away from home, with so many of my friends at the same time and it was cool to see them surf somewhere different. It was also great to meet some new people and watch them ride waves as well. Good times and lots of smiles. 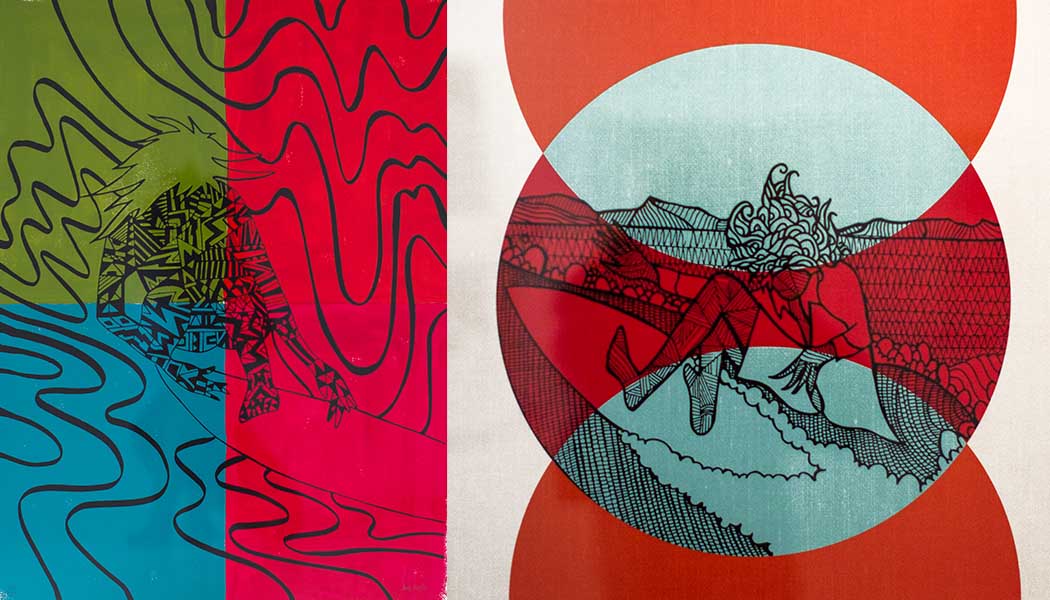 Tell us a bit about your first art show in Indonesia, Out There …

Originally I was hoping to spend a fair bit of time at the Temple and make all original work for the exhibit. Unfortunately this time around it didn’t work out like that. So with that in mind I reached out to the Deus family, got the dimensions of the gallery and worked on an installation from home. My friend Randall Christopher and I also had just finished some animations and graphic titles for our friend Jack Coleman’s new film, Groove Move.

We decided to incorporate that into the show as well and also a body of work that inspired the animation. I made silk screens and did a series of limited edition giclées using archival inks and papers. The theme Out There was based loosely on the new work that is much more abstract and psychedelic than I have done in the past. Also, it was because it was far away from home and it translates back to the surfing term that, as surfers, we all say almost every time we go surfing. 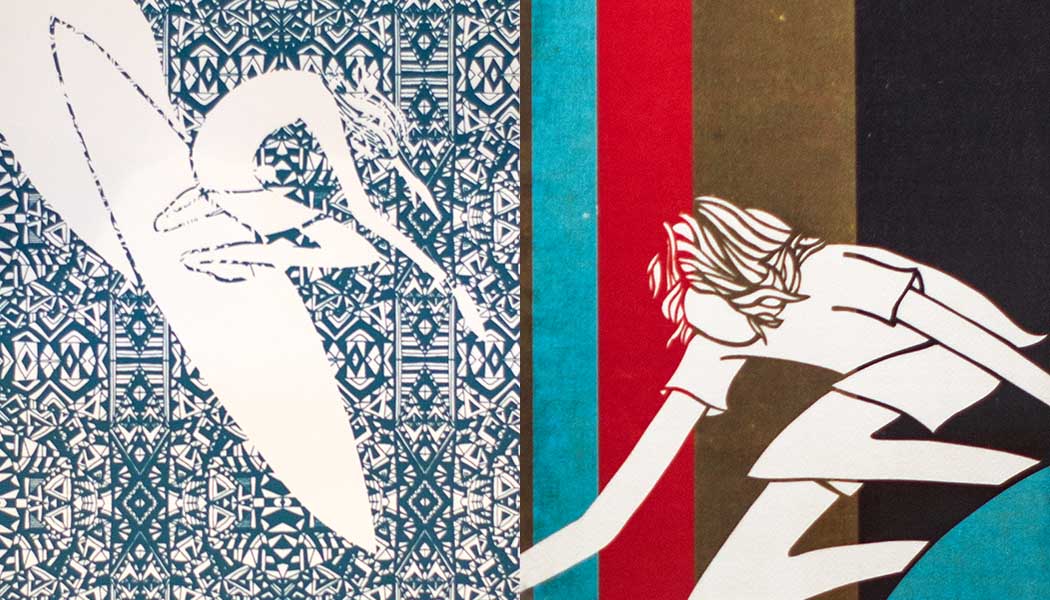 Have you enjoyed some artistic inspiration from your trip to Bali?

Yes, for sure, I always find a new and different perspective on things when I travel. Faces, places and spaces are fresh and that changes the usual ingredients.

What do you think you would do for living now if you didn’t become an artist?

That question scares me. 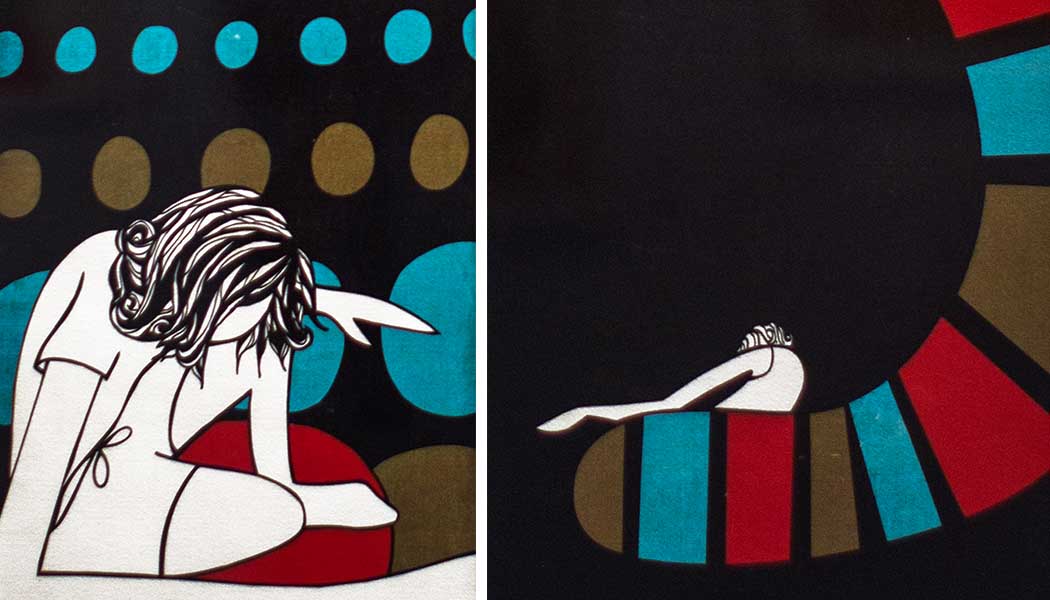 Okay let’s not go there … Any advice for the groms out there looking to get into the surf art scene?

If you are already doing it, keep doing it. If you want to do it, then make stuff all the time. Just let it out. Try all kinds of different things and see what feels special to you. Research and respect the ones who paved the way for all of us and learn from them. Enjoy being engaged in the process. 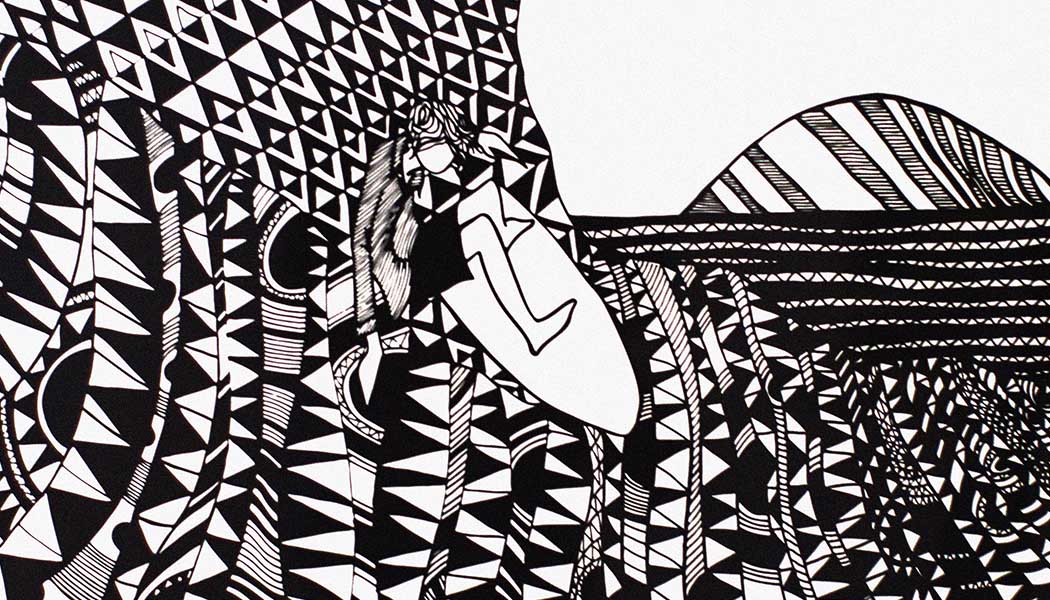 What are you’re working on next?

I’m just adding the finishing touches to a new website called Andy Davis Designs and I am very excited about this because the existing site hasn’t been updated in a very long time. There will be a whole new body of work and all sorts of eye candy for your viewing pleasure. I am also working on a colab with my friends at Captain Fin, for their upcoming summer range. There are a few other things coming down the pipe as well.