Two hundred years ago there were an estimated 50,000 elephants in Laos. Now there are just 700. Albert Leeflang’s photographs document the last vestiges of a magnificent species. Words: Melody Kemp. 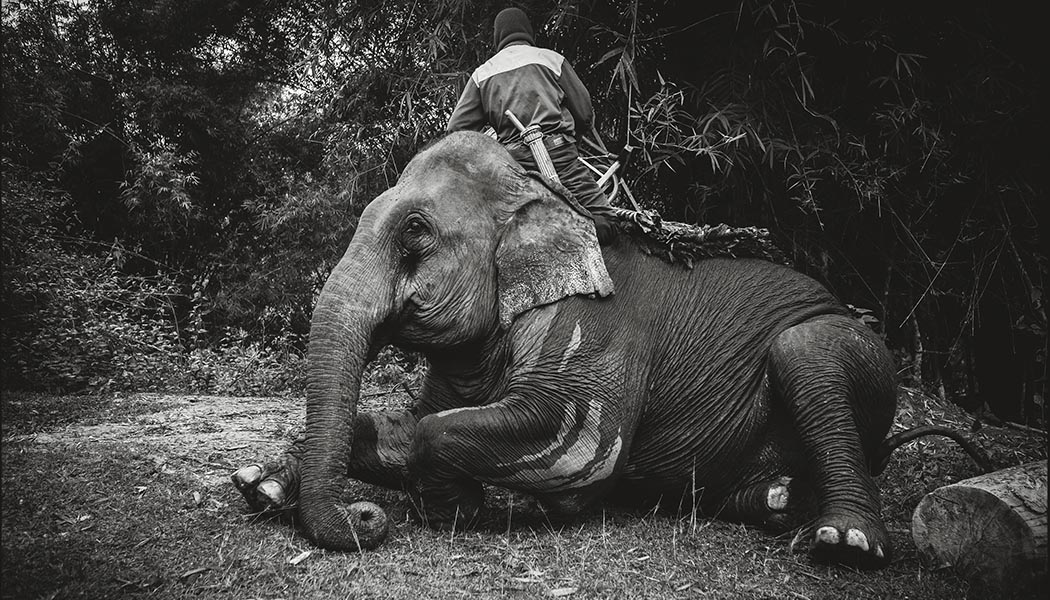 Dateline Vientiane: Only in Bali can one roll off a massage table smelling of frangipani, onto the back of an elephant. Well almost.

I was still living in Indonesia when in 1998 the Elephant Safari Camp was established in Taro. The camp, like a lot of Bali, has become burnished with tourist luxury; in this case removing all vestiges of the wilderness still home to the last of the clever but diminishing global elephant herds. At the time I thought smugly ‘Typical … another Bali fantasy’. Elephants are not native to Bali and had to be shipped in from Sumatra. But as wealth not poverty decimate global herds, I now realise that every living jumbo is a gift to the world. 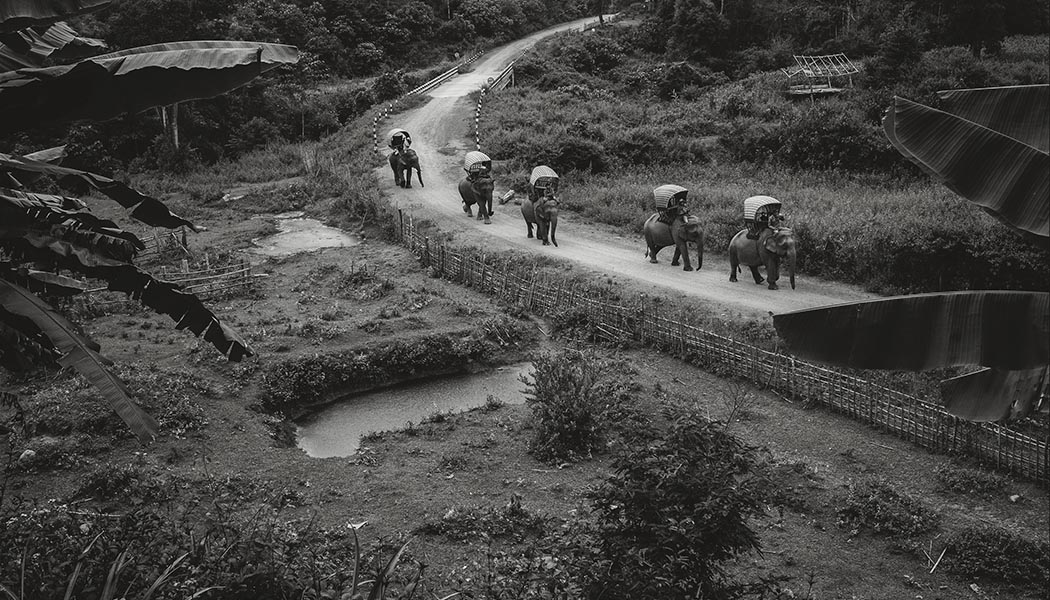 Imagine elephants walking down the Champs Elysee in chignon and shades, because they did roam all over Europe until exterminated by humans 40,000 years ago. The workers renovating Trafalgar Square found a stash of elephant and tiger bones when they got Nelson out of the way. 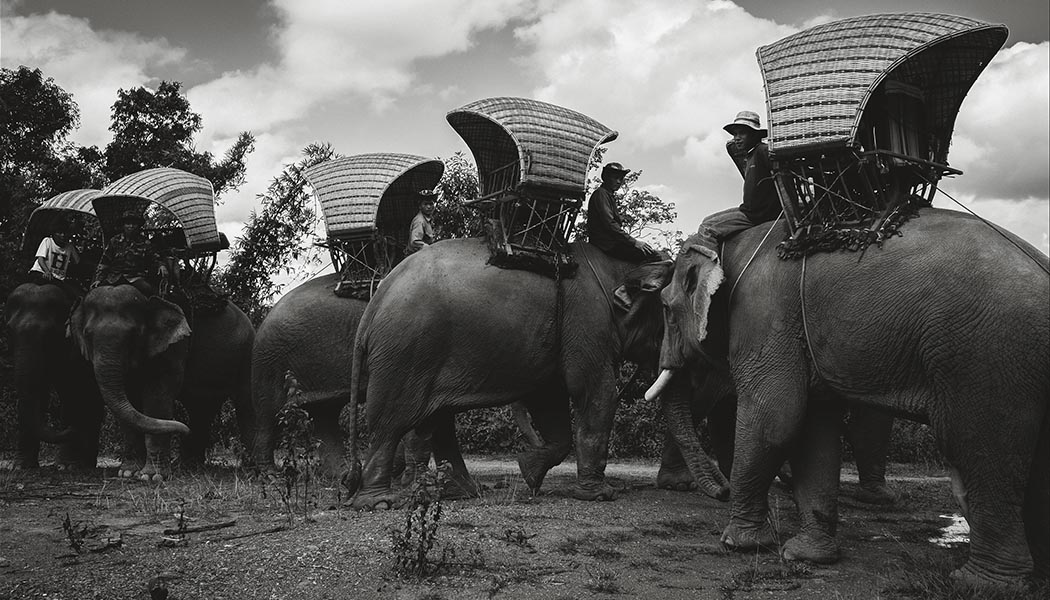 Laos, where Albert and I live, used to have abundant wild elephants. In fact the nation’s founder, a wily Prince called Fa Ngum, the proud owner of 33 teeth which according to auguries made him a threat to his royal relatives, conquered and cohered many disparate regions into what he called Lan Xang, the Land of a Million Elephants. The elephant was the armoured personnel carrier of its time, so he hoped the name would imbue the new nation with elephantine courage and tenacity. Modern Laos still retains most of the territory he hunted and gathered. 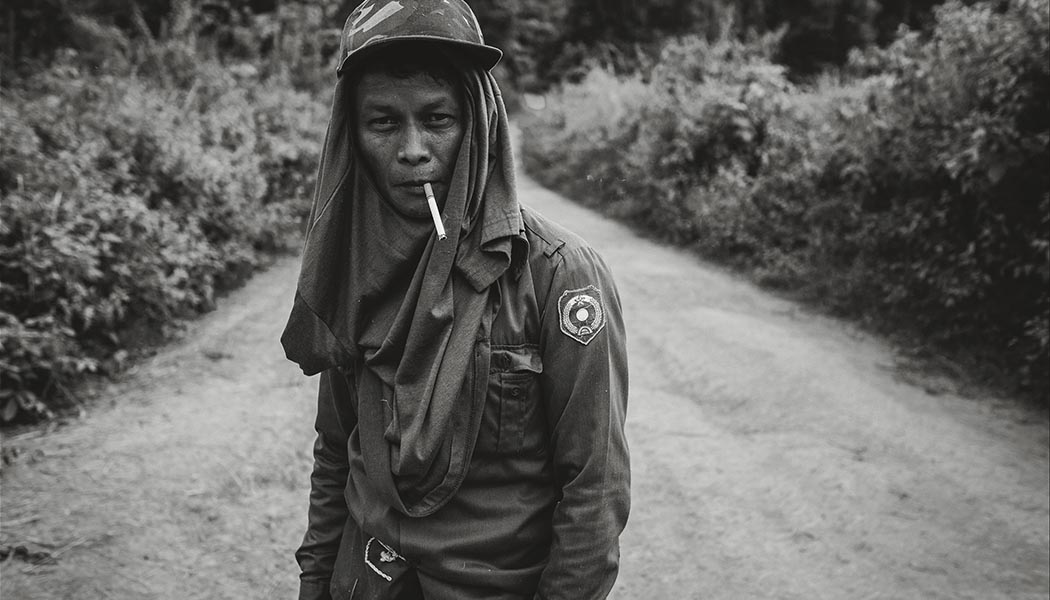 Flickering black and white film taken by the French colonists in the 19th and early 20th centuries captured Lao’s rivers filled with shiny broad pachyderm bums as they revelled in the waters.

They wrote of slow majestic travels on the back of elephants through otherwise impenetrable jungle. Fast forward to 2017 and the count is down to maybe 350 in the wild and maybe 400 domesticated elephants. Two hundred is considered to be the number below which they begin to lose a genetic future. 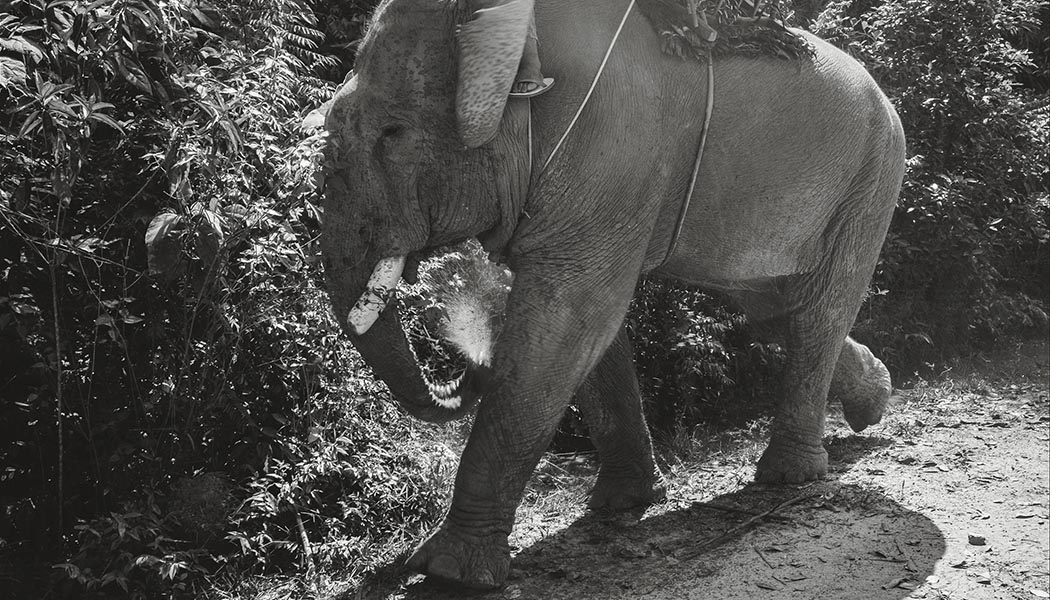 Now the rivers are dammed, the forest logged and the habitat fragmented by ‘poverty alleviation’ projects like roads and bridges allowing access to poachers and illegal loggers. Now it’s trucks, not howdahs, that carry the prizes.

So other than the animal itself, what will be lost? Are we pining after a bit of megafauna that, like Kim Kardashian, is famous for being um, megafauna? 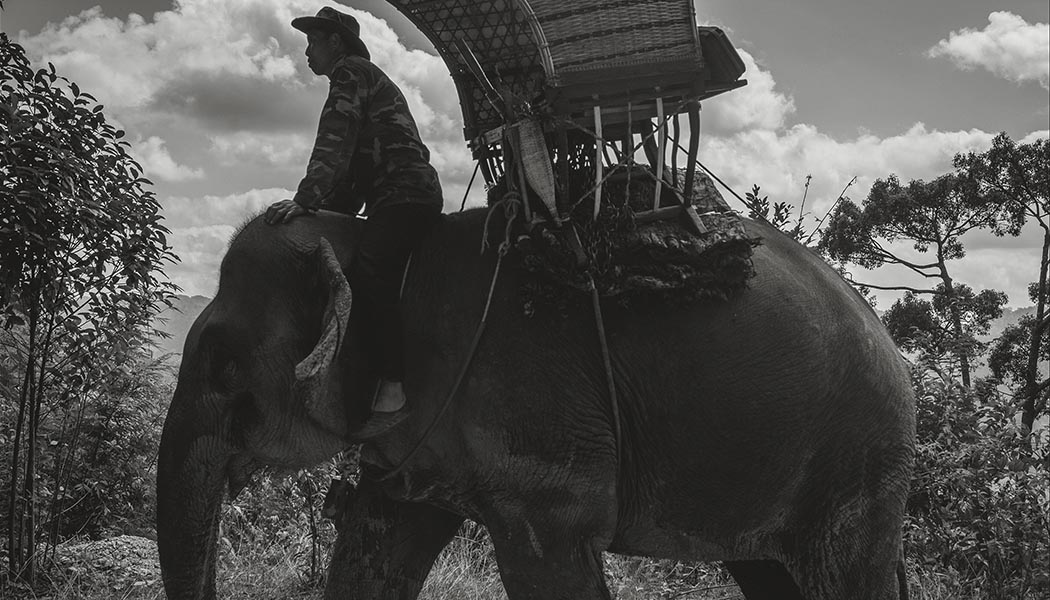 George Monbiot wrote that elephants shaped the European environment, particularly the structure and design of trees. Understorey trees such as holly, box and yew have much tougher roots and branches than canopy trees, despite carrying less weight. In other words, trees bear strong signs of adaptation to elephants. Elephants dig water holes and locate essential mineral licks to be used by other animals, they forge paths for smaller less hardy animals in search of food. Their sensitivity to aggression and geospatial sense alerts others to trouble makers and poachers in the vicinity. 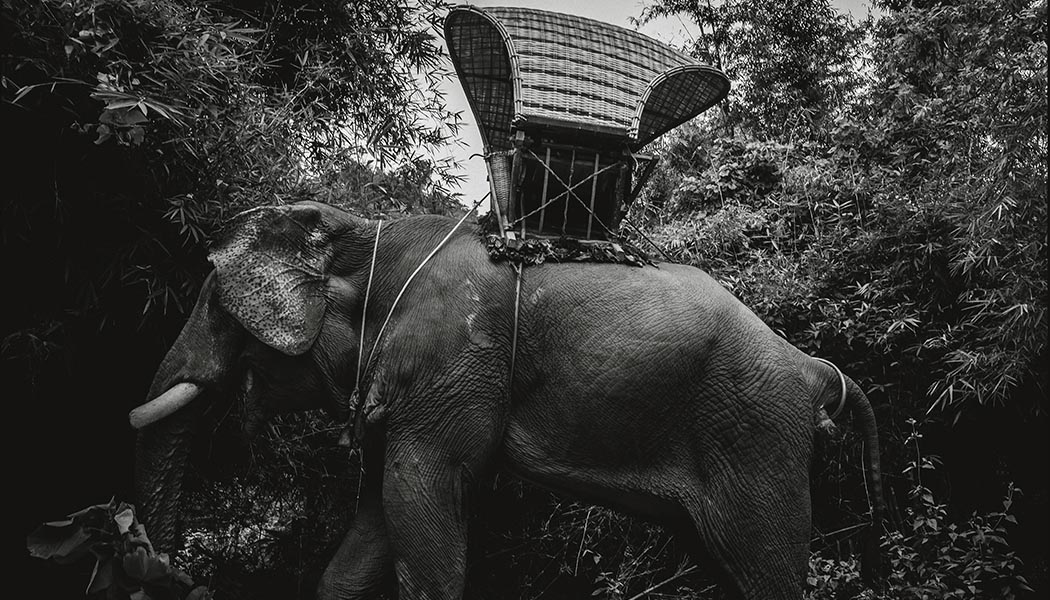 Their huge appetite and lousy digestive system produce vast amounts of waste that is packed full of seeds pre-packaged in compost. They would be the delight of any DIY garden center. Despite that, they can neither outrun telescopic sights nor demur from the attention of circus owners across the border in China who know they will make a million – and this is literally true: Chinese elephant parks can make a million a day from elephants performing inane tricks and silly walks. 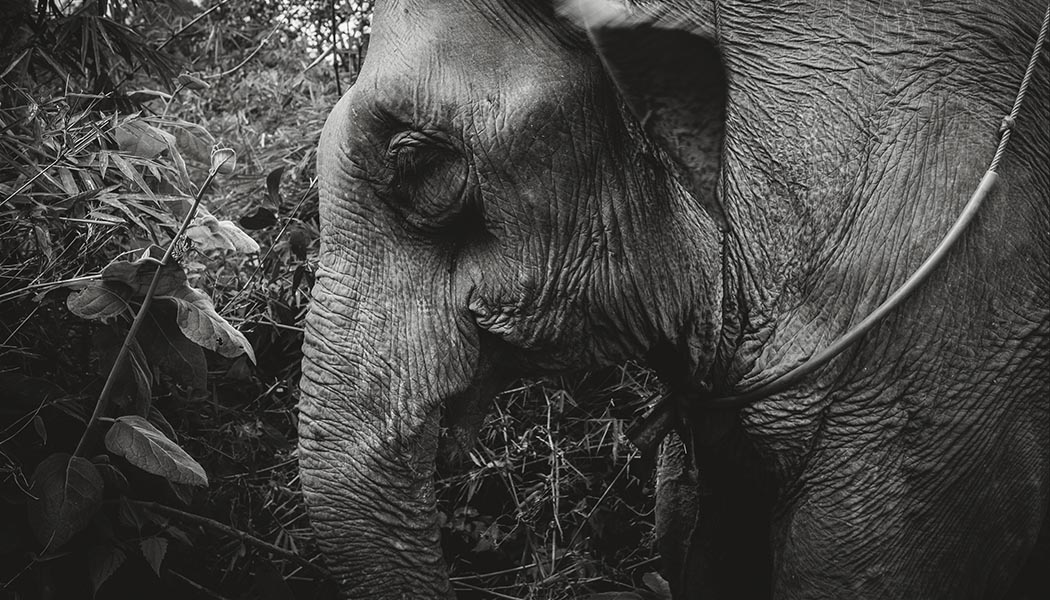 In Lao people believe that humans and elephants have thirty two kwan, or life spirits. Each of those is important for health and spiritual well-being. Changes in one’s life, like travelling, or marriage, might tempt a kwan to dawdle too long in the duty free shop and abandon you, leading to unsightly spiritual (phi) lopsidedness. So it’s important to be reunited with one’s kwan at a ceremony called a baci, which literally means spirit calling. This pre-Buddhist ceremony is still very much part of Lao life. It’s fun, irreverent, and democratic. Everyone participates in offering well wishes to each other using white threads tied around the wrist after the mophawn finishes his chants. 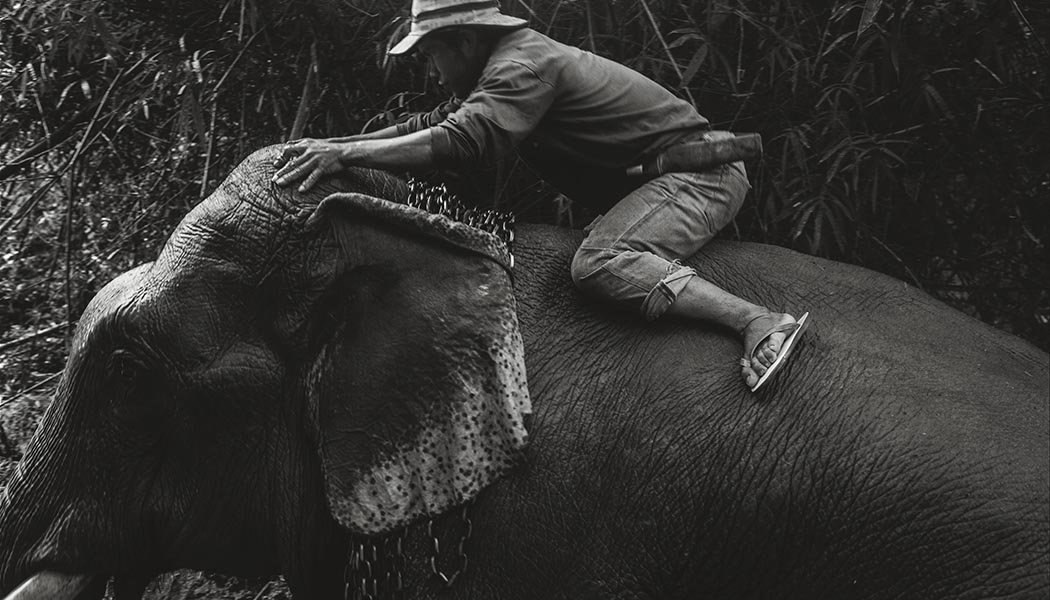 The elephant baci follows the same format, albeit larger in scale. While humans warrant an ex monk to lead the proceedings, elephant bacis demand senior monks to preside over their nodding heads. The ceremony includes the mahouts and either the threads are given to the mahout to tie around his charge (and while women hold significant status in Lao culture, mahouts are still 99% male) or the monks themselves tie the thread around the tusk or ears. This is to ensure that all the kwan are tucked up nice and snug in the jumbos soul and not tempted to wander off into Thailand. This spiritual parallel, even to the point of having the same number of kwan, indicates the historical and symbolic importance of elephants in Lao culture, adding even greater poignancy to their dropping numbers. 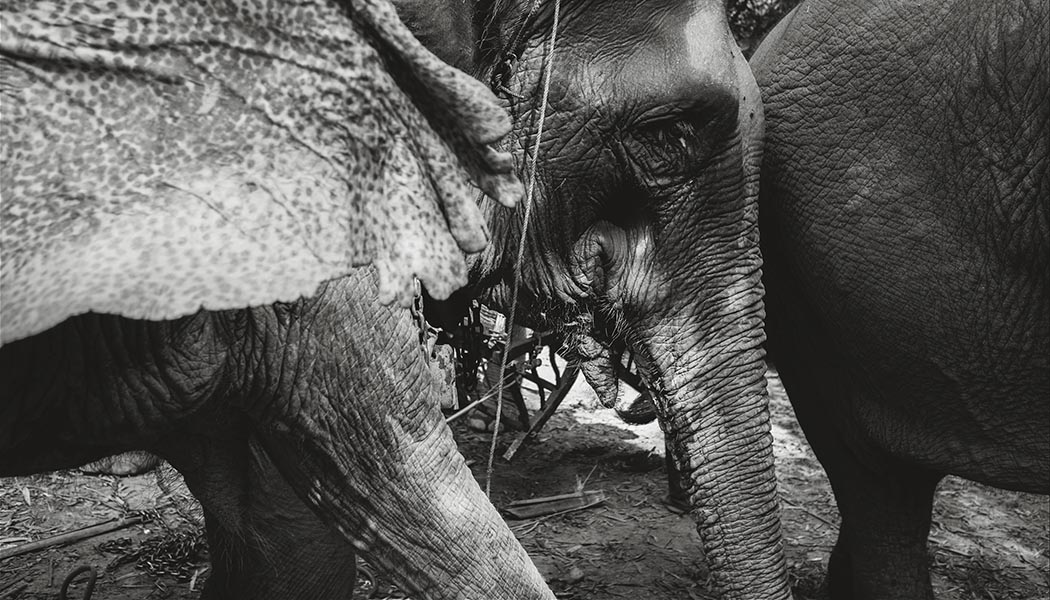 When the Lao royal families, with all their pomp and ritual, including being borne aloft in floral decorated howdahs or walking behind the palace jumbos, taking care not to step in the prodigious poo, were replaced by the dour, sanctimonious Pathet Lao, the jumbos began to fade to grey. They became part of the proletariat, logging forests and fading from sight. 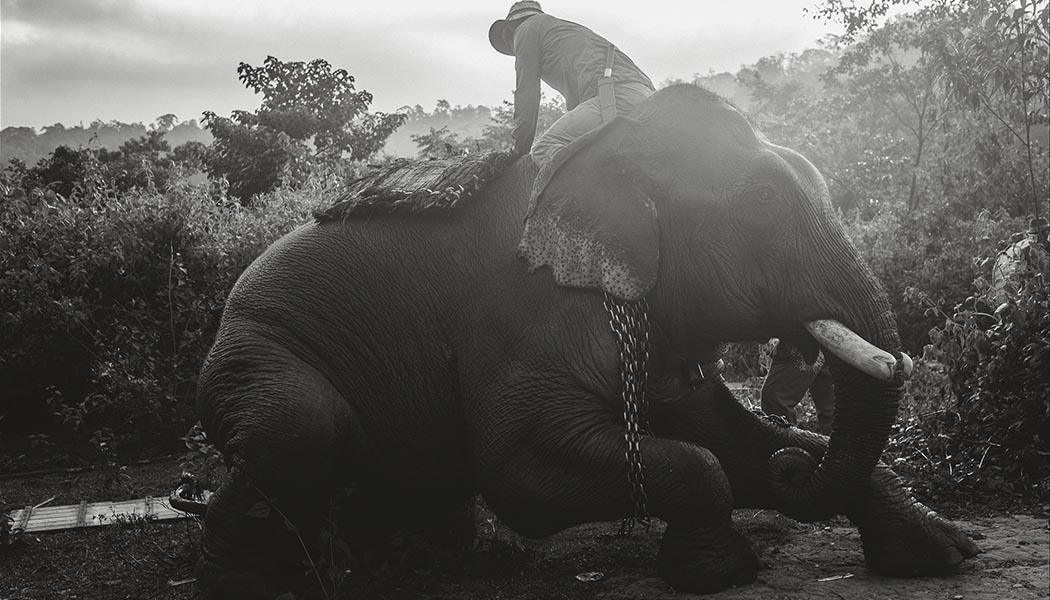 In 2015 the Elephant Conservation Center (ECC) held the epic Elephant Caravan to coincide with the 20 year anniversary of the old Royal capital Luang Prabang’s classification as a World Heritage city.

The ECC based in adjacent Sayaboury province, the elephant culture capital of Laos, ran the parallel event in order to draw attention to the fact that elephants were not only older than Luang Prabang but also part of the Lao’s and the world’s heritage. The Caravan’s 600-km trek brought together artists, educators, scientists with elephants and their keepers. Albert’s photographs captured the mood of the event, sometimes sombre, sometimes joyful as school children rushed to collect books handed out by elephants, and villagers laughed at clowns and the theatricals of the troupe entertainers. 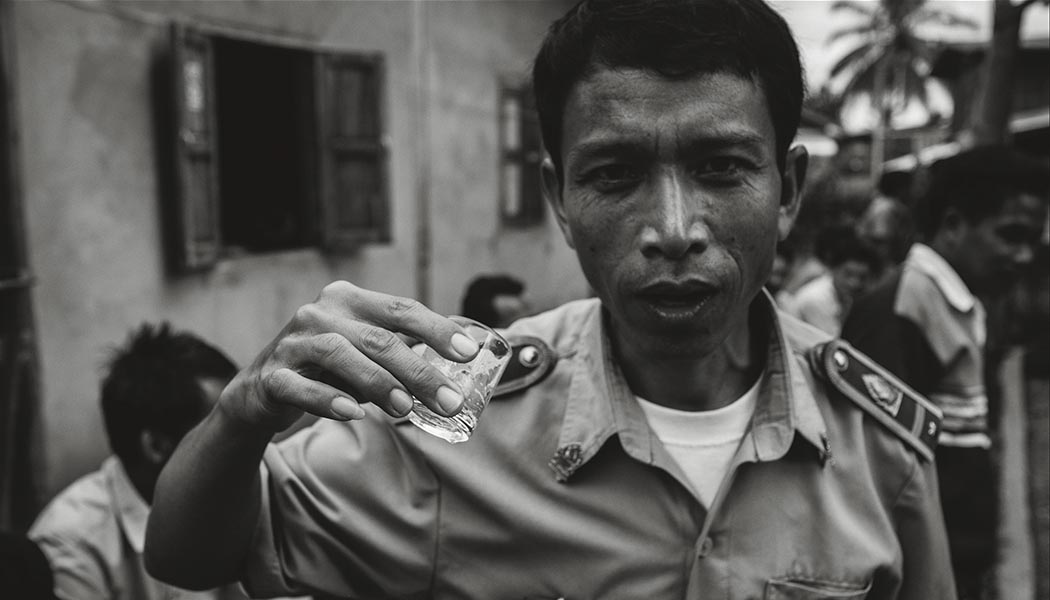 Albert catches the meditation on the future of the animal and mahout culture that has cared for them; of traditions that have a lineage as old as the ethnic Tai Lue people themselves, whose books on elephant healing are still valid, and upon which the Luang Prabang Botanic Gardens (Phad Tad Ke) established their elephant pharmacy garden. 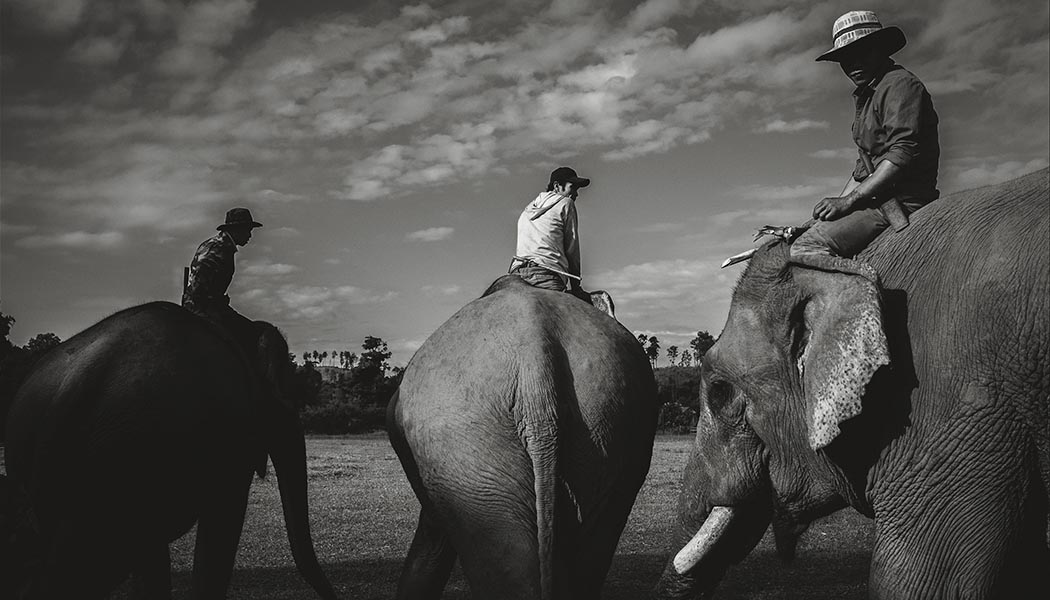 Despite its pretensions to communism there are no pension or welfare schemes for Lao’s mahouts. Forty years after the Laos magnificent forests were converted to cash by well-connected shysters, the elephants and their keepers are out of work having done their job too well. A life of poverty has pushed the sale of the nation’s treasures to cross border entrepreneurs where, despite their vast intelligence complex language and social systems, they are reduced to wearing silly glasses and performing tugs of war. The gaiety of the Caravan had its shadows; the hard gray questions about the future of the elephant in Laos, questions that have since gathered like plankton as China has been granted vast land, and is in the process of acquiring more of Lao’s elephants, their mahouts being paid expensively to train these amazing creatures to turn cheap tricks.

Two hundred years ago there were an estimated 50,000 elephants in Laos. Now there are just perhaps 700. Those still used in logging are over-worked and often ill treated and their mahouts – once highly respected for their skills and wisdom – have been reduced to a life of poverty or pimping their jumbos. Progress and wealth has separated humans from the environment they were once part of. 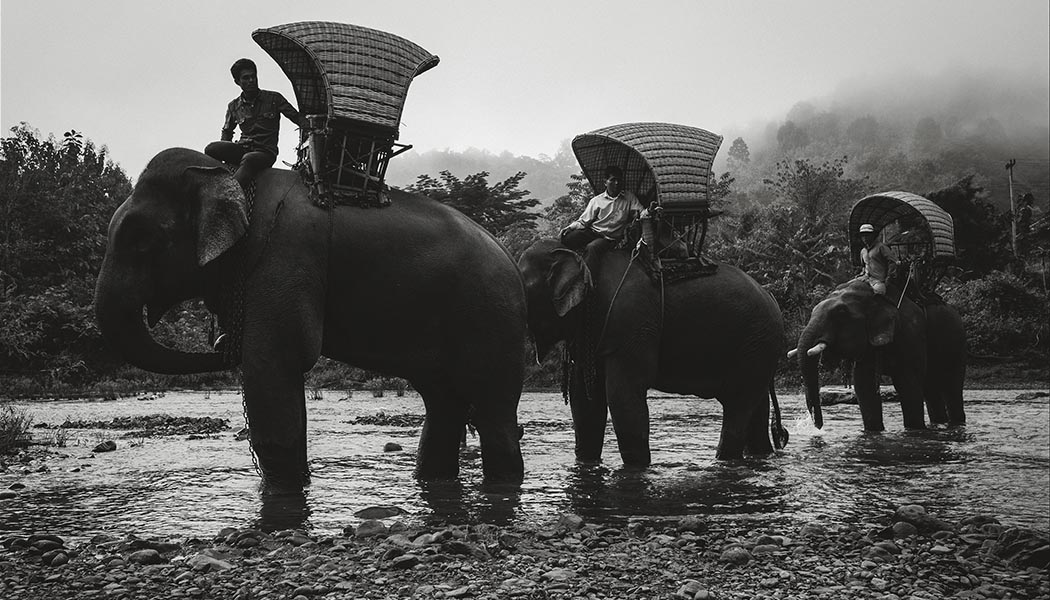 Albert’s photos capture the ambivalence of those who care for these great beasts as they look into a very uncertain future. The two exceptions are MandaLao where one can walk with elephants – it now being accepted that elephant riding unless one is a skinny mahout is a no no – and the Elephant Conservation Center in Sayaboury which welcomes those who may want to forgo a massage, fashion and luxury for mud, canvas boots and learning.