Dreams Are Made Of This

Destined to be a chef, Helios Hedar had other ideas. Today he runs Pro Tuner motorcycles, building custom dreambikes for enthusiasts around the world. Words: John Stephens. Image: Saskia Koerner. 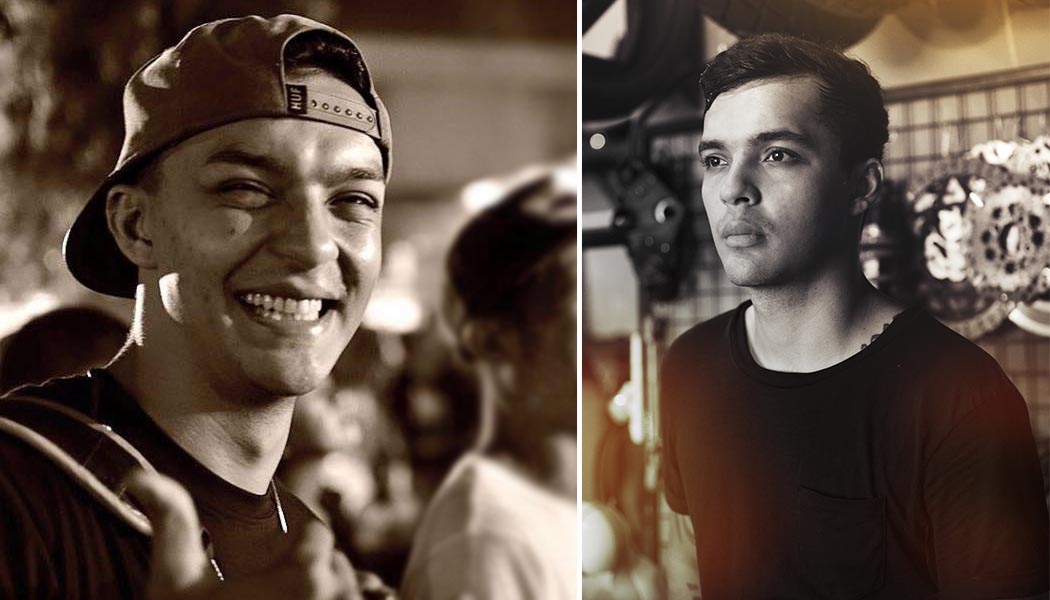 So what’s the story, Helios? How did you become one of the island’s best motorcycle mechanics?

Well … I met my partner when I was a teenager. He opened the shop in 2001. He’s from Yogyakarta, but his father is Balinese, so he brought him here. I joined the shop in 2009, but my parents weren’t very happy about it because they had to pull some strings to get me into Culinary School in Sydney. I didn’t graduate high school because of my dyslexia, so I dropped out and went to Sydney at the age of 15 and all the students were like, what’s wrong with this kid? He’s too young! Yeah, I spent six years there, came back, helped my brother with his restaurant, REPUBLIK, then realised it wasn’t for me. But it started before that. I got on my first bike when I was seven. It was a Yamaha DT65cc motocross bike. Then when I was around eleven or so, I got into the art of bikes, like clay models and stuff. I built my first bike when I was 13. I like making things and being creative. So in 2013, I told my family that I was involved in the shop, am passionate about it, and wanted to pursue it full-time.

Was there ever a moment when you felt like giving up?

Every day! This isn’t a magic show. Steel isn’t the easiest thing to negotiate. People come in, sometimes with a lot of money, and say this is what I want, do what I say. Then I say get the f@#* out! I know I need to make a living. We all need money and I’m kind of wild. But my priority is building good bikes. Bikes that will last. So I build them to my standard, ride them, and if I like them, sell them. Quality not quantity. 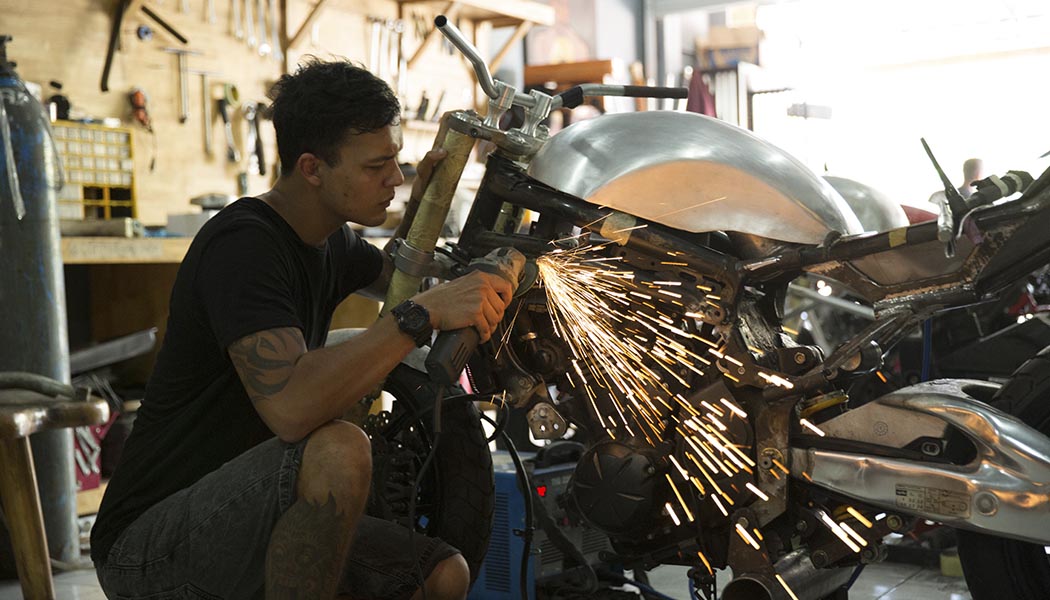 How do you come up with this stuff? What inspires your designs?

The design goes through stages between my partner and me. We sit down, do a sketch together, then an AutoCAD 3D with design students from Udayana University. It depends. We sit down with the customer and say look, it might not be exactly like this … it might be better. We start with the design and see where it takes us. We build bikes that not only look nice, but run well too. We have to combine design with engineering. Where we hide our cables. Where we put our sockets. And then it has to be an everyday bike as well. You know what mean?

Who are your influences?

I grew up watching Orange County Choppers, so I love Paul Senior’s work. He’s a genius. His bikes are so cool. Everything is perfect on them. Then there’s Arlen Ness. I love Harley Davidsons. He is the man when it comes to Harleys. His designs are amazing. He is a huge influence. For riders, there’s Travis Pastrana, a motocross, supercross rider for Suzuki. You name it, he rides it. I wanted to ride like him when I was younger. I still do. And of course, Valentino Rossi. I mean, who doesn’t love him? He’s the fastest. 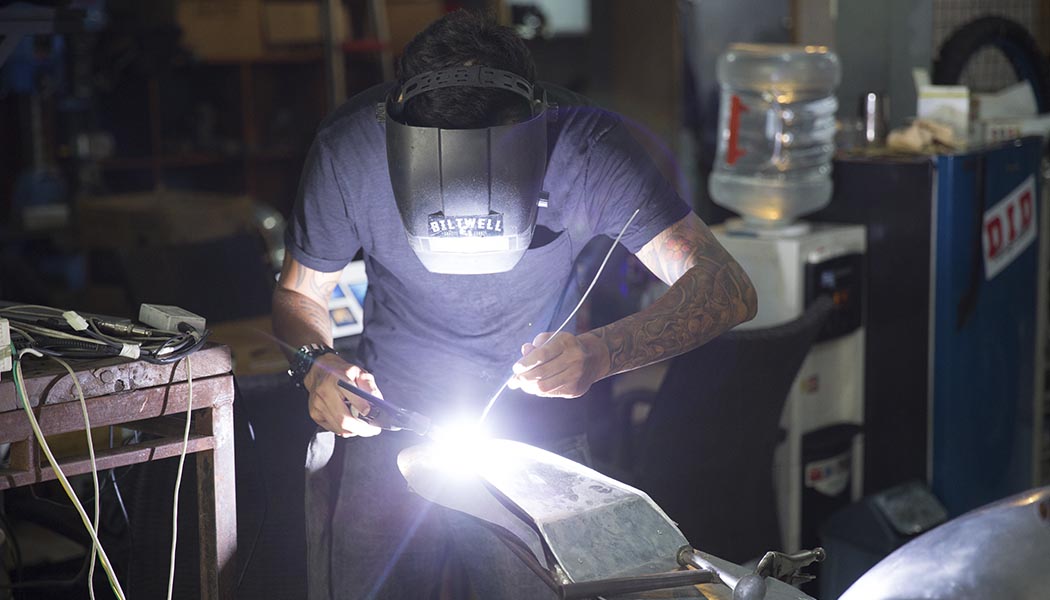 If you could build a custom bike for anyone, who would it be and why?

I’m working on that bike right now! For Sarjono Sutrisno, Pak Stro. He always pushes me. He’s a famous producer from Jakarta. He owns Stro World Productions, but I’ve known him forever. We’re working on a bike for an upcoming superhero movie of his. I was chilling on the beach with his friend and he called me and asked if I could build a Morgan three-wheeler. I was like, why are you pushing me to the max? He said, c’mon, you know you can do it. So then I had to think about the geometry and the positioning. Where we were going to put the engine. How we are going to transmit the gear shifting. Yeah, he likes to push me like this. It’s going to have a Harley twin cam Soft Tail engine in it and it’s going to be sick.

What are people in Bali going to be riding 10 years from now?

Nmax. Hah! Well, custom bikes will only take you so far. Hybrid bikes are the future. A cross between street and off-road. Next week, I’m testing this prototype for … never mind. Don’t put that in there! A lot of it depends on the laws here in Bali. It’s already difficult to get certain bikes. A new Ducati will cost you around 50 grand Australian. Dealers are bound by their quotas. It’s way cheaper to get a custom bike built. For example, my friend bought a used Ducati in Australia and he’s going to send it here to be customized. It won’t necessarily be road legal, it won’t have a bluebook, but c’mon, it’s better than spending 400 juta on a new one.

Okay man, ready? Tell us about your worst crash.

Hmm … it was 2012. I was riding down Legian on a Honda Vario without a helmet. I was hammered. It was raining. I was eating a kebab in my left hand, and then I hit the front brake with my right hand. Ate s#@* and wound up in the hospital with the kebab still in my mouth. It was a total nightmare. Surgery. Broken collarbone. Fractured skull. A big mistake. I still feel the pain. It hurts right now. Be careful kids.

Ouch! So what are your hobbies?

I just bought a boat. I’m kind into that right now. I also like to box. It keeps me fit and allows me to vent my frustrations. Painting. I like to paint. Not just bikes, canvases and stuff. And riding of course. Riding is the best. Touring and off-road. My favourite route is up north through Singaraja and Kintamani. Those are good roads. It’s beautiful. I once rode to Medan, Sumatra with my friends. It took five days. We were going slow. It was pretty rough. So many trucks. So much traffic. I want to ride through Papua one day.

I want to do that ride with you, Helios. Is there anything that happened in your life that changed the way you view the world?

My parent’s divorce. It’s okay. I want it to be mentioned. I was 12. It sucked, but it made me realize that life isn’t always great, and that I should appreciate what I have. I lived with my mother. My older brother, Jonathan helped me out a lot. He was there for me through the tough times. Things are better now, but yeah, it affected me then. 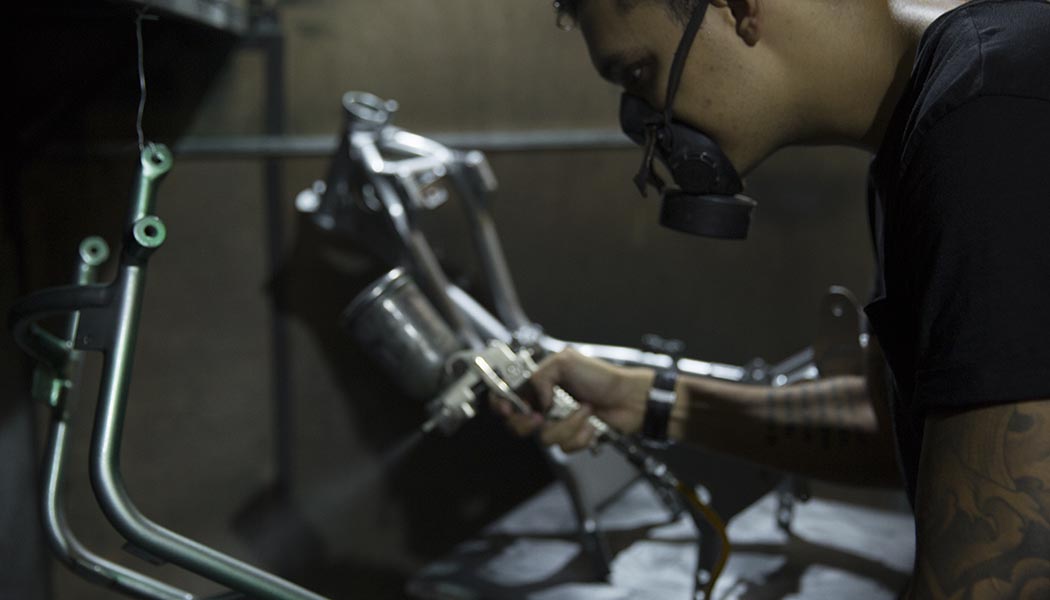 What about for the newbies coming up in the industry? Any advice for them?

Be flexible with your clients, but don’t take any s@#*. Be creative and get used to rejection.

Have you ever been busted for speeding?

What kind of person buys your bikes?

There are two types of people who buy my bikes. There are the ones who understand the motorcycle world, visionaries who want to do something different with their bikes to bring about some self-satisfaction. Then there are the rich collectors who just want to have one. They might not understand that much, but they’re keen and have good taste. They might not ride them, so there’s less of a risk of the bike being broken, or them being broken. 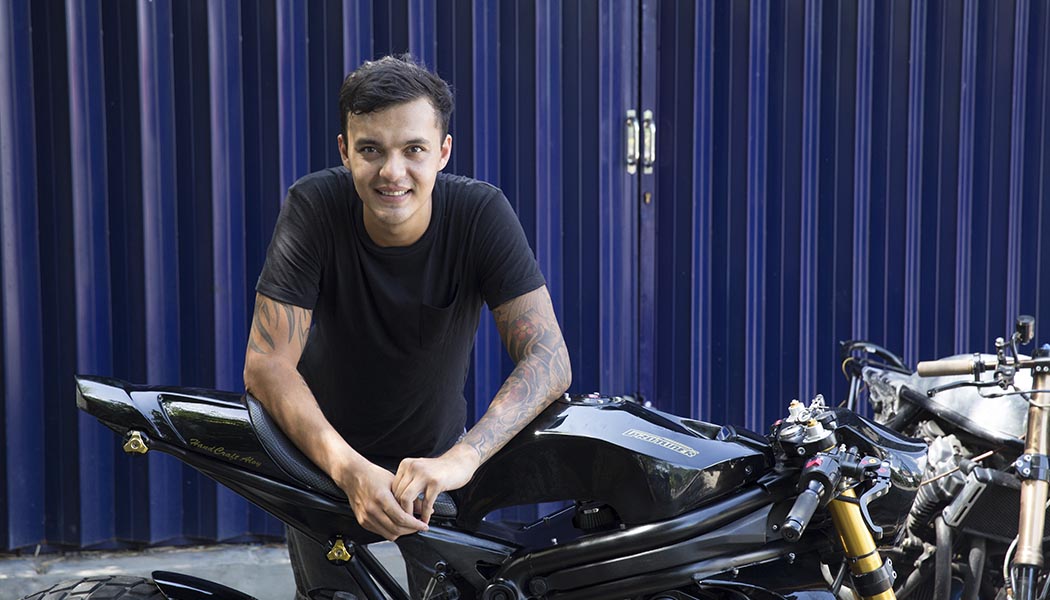 How do you plan to stay ahead of the competition?

I don’t. I mean I don’t see them as competition. I see them as friends and family. We support one another, the way it should be. Like Keduk Garage in Denpasar. I love his bikes. They’re very old school. He’s an inspiration.

Okay, so any shout-outs? Anyone you would like to thank?

I’d like to give a shoutout to Joe Hamil from Bali Bike Monkeys. He is good friend of mine. Very supportive.

Thanks Helios. Let me know if you need a wingman for the Papua tour.