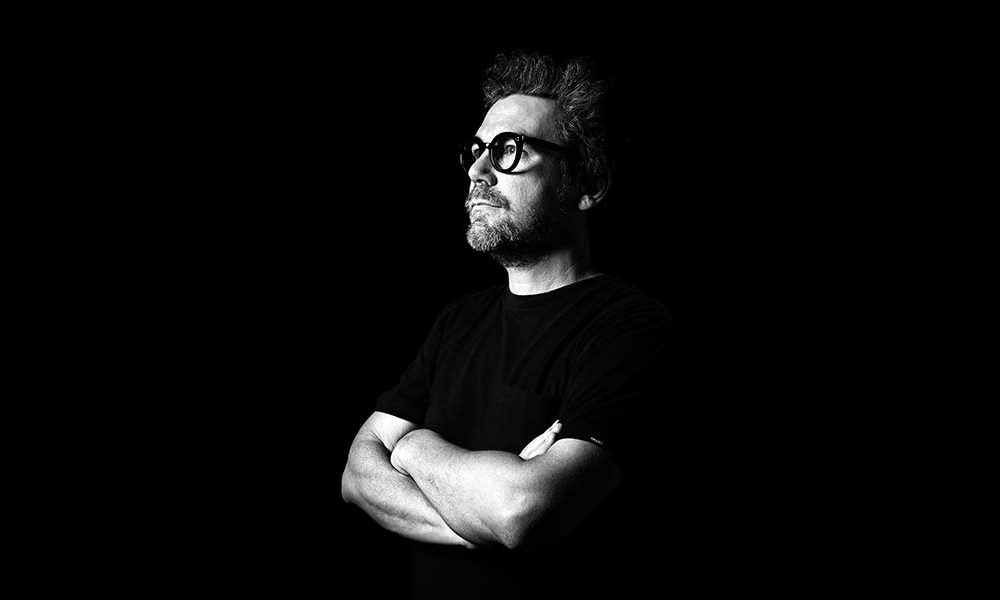 Carby Tuckwell is creative designer at Deus Ex Machina, which is probably all you need to know about him. Words: Ano Mac. Photo: Anthony Dodds. 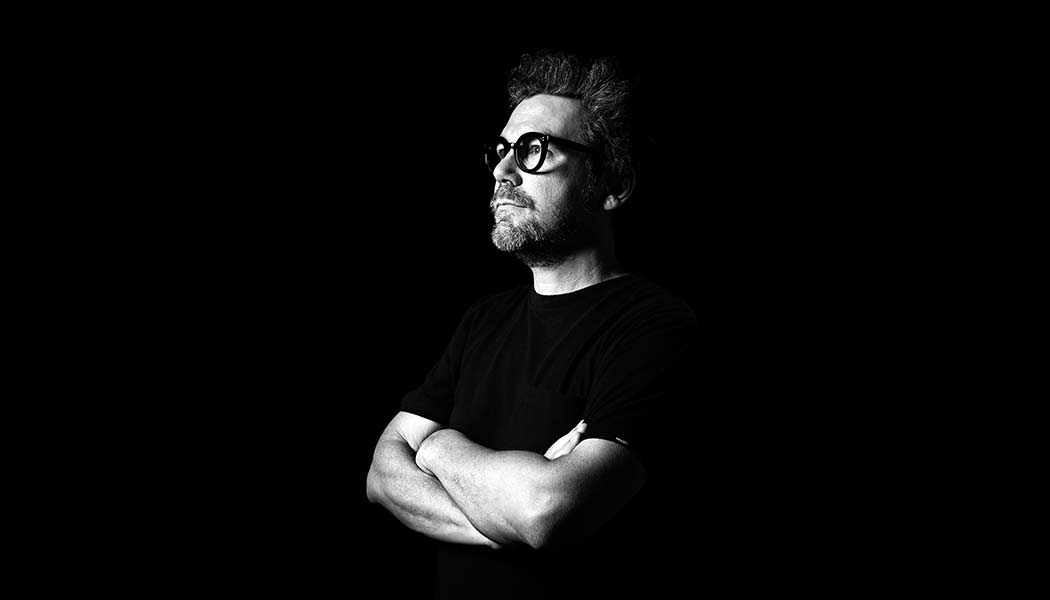 Carby Tuckwell isn’t a name most would have heard, yet anyone who’s familiar with the brand Deus Ex Machina has seen his work. He’s the man behind the graphics that have propelled the company to worldwide prominence.

Already well known in design circles before he took a leap of faith to start and build Deus in 2006, Carby used to be creative director for Moon Design, responsible for the branding and livery of Jetstar, Qantas’ low-cost carrier. Isn’t it every guy’s dream to paint a plane? The company also had a lot of runs on the board in the retail and apparel design sectors, so he wasn’t coming into this fashion thing blind.

Moon Design was transitioning and Carby was looking for something to take him to the next step. He’d known Dare Jennings since Dare’s Mambo days and the two had been having an ongoing conversion about the idea of a fusion. So when Dare popped up to say he’d found the right property in Camperdown, Sydney’s Inner West, there really wasn’t any reason other than to say yes.

Two guys in a shed, a very large shed apparently, started out with a vision, and no doubt a healthy dose of doubt. “The good thing about a large shed though,” said Carby, “is that there is the impetus to fill it.”

Carby grew up in northern New South Wales. He’s what, these days, a lot would be quick to label a nerd. Meaning that his shock of curly black hair sculpted into a mohawk, medium stature, glasses, prodigious intellect and hyper-sharp tongue were the perfect recipe in rural Australia in the late 70’s to get him into a pickle. And when you are attending Lismore High School, which was at the time arguably one of the more brutal schools in NSW, he should have been prone to the odd lunchtime pounding if he hadn’t enjoyed the protection of a local indigenous student who called him Fonzi. Apparently all due to the mohawk and a customised Billabong cord jacket he owned. 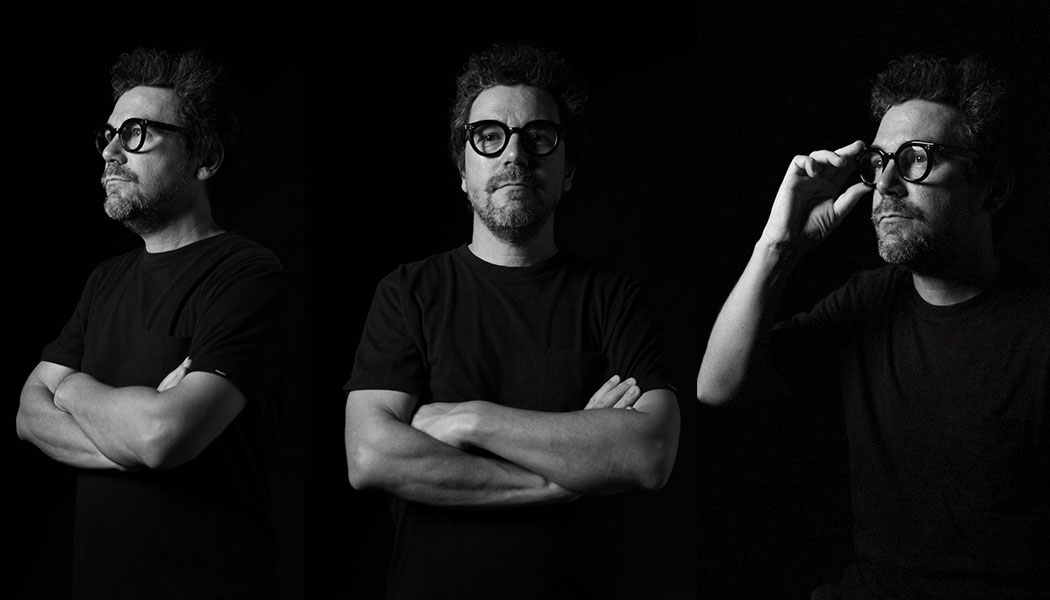 Providence intervened though and the state built a new high school at Alstonville, a town close to him, and so it’s to there he went. With a new school, there are new teachers, and one of them, Sadiskersky, a big Czechoslovakian bloke who was apparently rather sharp of mind himself, as well as being something of a bon vivant, came to town to teach art. He is the man Carby credits with setting alight his interest in art and design.

In one exchange he remembers Sadiskersky booming, “Tuckwell, you will never get anywhere in life if you continue to put a black line around things!” There’s no recollection of what he was drawing at the time, but he singled out this moment as the one that turned him down the path to the iconic simplified line drawings he does. They’re drawings he’s done of motorcycles, cars, skateboards and other beautiful objects and he’s been doing them since before the beginning. It’s a style which has become identifiable to anyone who has cared to have a look at his – and of course Deus’s – art.

Inspiration he had in spades. He was a country kid. Out there they’re riding dirt bikes, driving cars and tractors, riding bicycles to school and of course, skateboarding. So, it’s not hard to imagine that after the kick in the mental pants he’d gotten from Sadiskersky, Carby began developing and refining his new style. And over the years he’d been building up a backlog of art and graphics and finally, when he jumped into the driver’s seat of Deus, he found a vehicle in which to use them.

Deus was a very different beast to anything that Carby had working before. Dare was on his path with a pocket full of big ideas and Carby was coming at it from his angle, the aesthetic and design side, putting pieces together, taking a little bit from over there and a little bit from over here and mixing together a cocktail of styles; drawing, print, photography, watercolours and other media. “The hard part is making sure it didn’t come across as some weird whacky hybrid or a knockoff.”

In recent years there has been criticism from some of the more rigid custom builders that Deus has lost its way. That it is no longer a custom bike builder but rather it had commercialised itself, globalised and become an apparel company. When you ask Carby about it he’s very matter of fact. “Deus Ex Machina never set out to be a motorcycle company. Sure that’s what they were most enthusiastic and passionate about at that time when they started.” The fact is Deus has done art, design and of course apparel from the word go. The bikes were a great vehicle for expression, art and logos and since that point, they’ve done a lot of things. Cars, bicycles, skateboards, skis, and snowboards, you name it, if they are enjoying them, then you’re likely to see it in the next season’s range. Earlier this year, Carby answered this very criticism by saying “…from the beginning both Dare and I had very eclectic ambitions for the Deus experience, driven by a desire to get as far away as possible from the fundamentalist religions that the surf and moto industries had become.”

For those first five or six years, Carby was a happy camper. He sat at a desk pushing out a phenomenal amount of work. But he’s no slouch and being rather versatile, not to mention something of a renaissance man, he set about using his words to lure some likeminded to the bash.

Carby has always been a fan of “bringing more people into the tent” as he so articulately put it. Even for Instagram, he had an eye out to discover people doing stuff that interested and excited him. Remember Tumblr? Back then it was the place where you could peruse images and make connections. Carby did. Then there were the introductions. Gary Inman from Sideburn Magazine gets a massive nod from Carby for introducing his London posse to the brand. Sideburn started a couple of years after Deus and half a world away but shares some of the same space. Among those Gary introduced were Stevie G, Ornamental Conifer and De-Spray, all of whom have been on the collaborative hit list.

Carby professes one of the better emails he shot out into the dark was to a couple of lads from Austin Texas, the LAND boys, Caleb Owen Everitt and Ryan Rhodes. He’d seen the work they had done for Van’s, their first job as ‘LAND’ and loved what he saw and how it fit his perception of what and where Deus should be. I met them in Bali a couple of years into their collaboration with Deus and when asked they laughed and said that while they had never met him, “Carby gives great email!”

“What we do graphically and artistically with the brand collaborations is in a broad brand sense, ‘what happened here?’ The original seed was planted from Camperdown with the ingredients but then with these guys it’s like it’s in totally different soil and the plant grows and it’s got totally different enthusiasms but it’s still the same plant, it comes from the same genus. It still says Deus Ex Machina. With an artist whose work is so extraordinarily different from what we’ve done, it’s not a handbrake. People are so used to us by now that they go, ‘Oh, I get it’.”