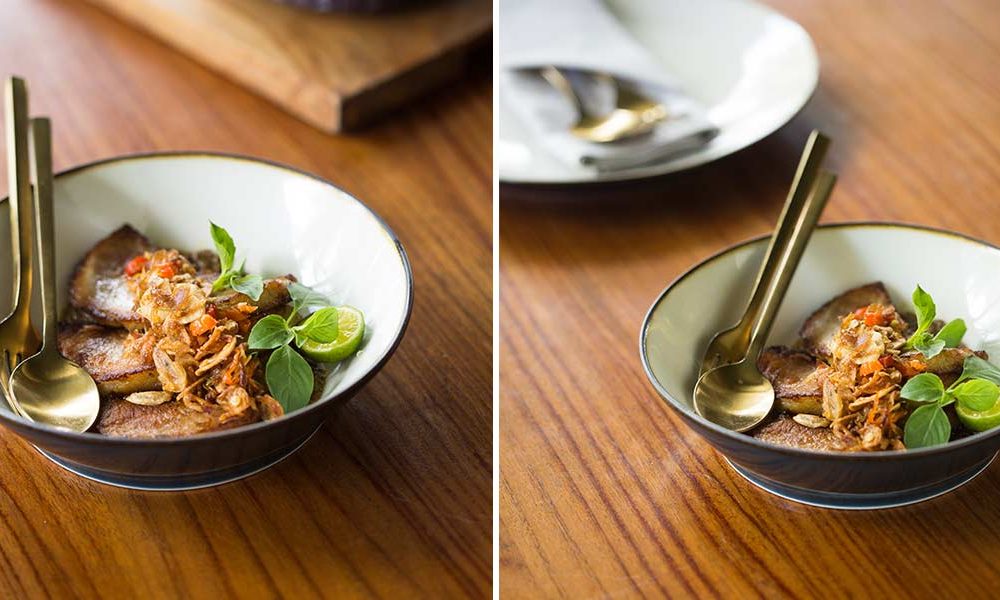 Sara Douglas takes an evocative culinary journey through the archipelago at Kaum. 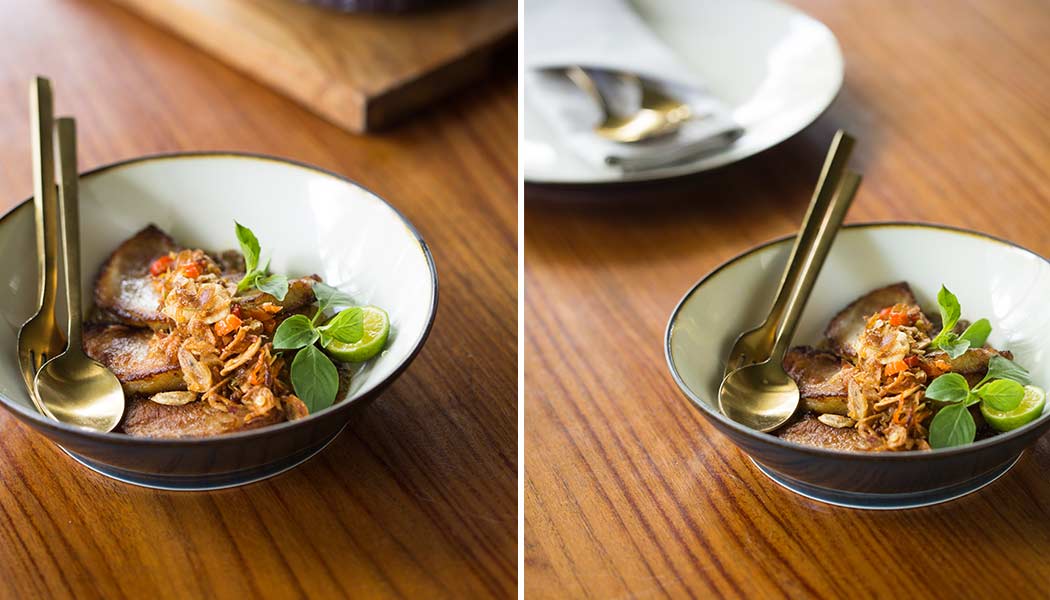 Potato Head Beach Club can blindside you. It’s big, it’s funky, it’s gregarious and yet it’s also got pockets of difference, places to tuck yourself away and it’s charming in its details. It is the sum of its parts.

Kaum, it’s lofty Indonesian restaurant is a little like that. As you wander into Potato Head, awash with bodies gleaming in the sun, a soulful soundtrack with a sturdy beat plays and the sun and the surf work their part. You don’t expect a discreet stairway to deliver you to a level that is markedly different than the one you just departed, yet that’s exactly how it feels. There’s more than a nod to Alice in this wonderland. 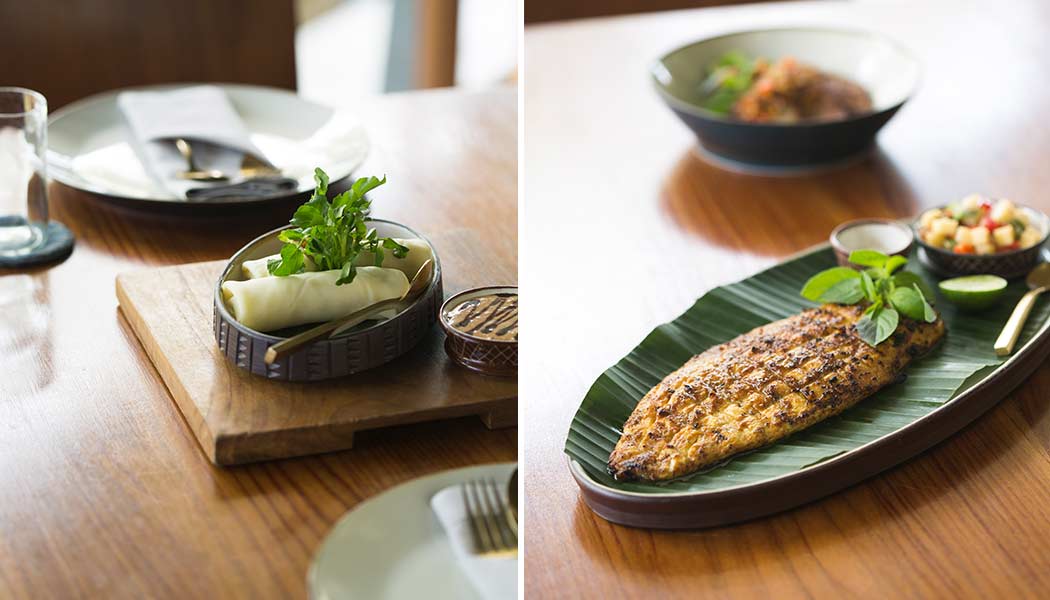 Kaum is quite rightfully, upstairs. It is a cut above the humble warung, although many of its dishes sing the same songs. It has earned its place among Bali’s better Indonesian restaurants, delivering a culinary experience that sits squarely between fine dining and street food.

Illuminated by its many windows that overlook the grassy grounds, the swimming pool and the surf, Kaum is light, modern and casual by day. By night, the lights reflect the moonlit sea and a calm settles over the club below. The atmosphere changes but the food and the service are equally good. 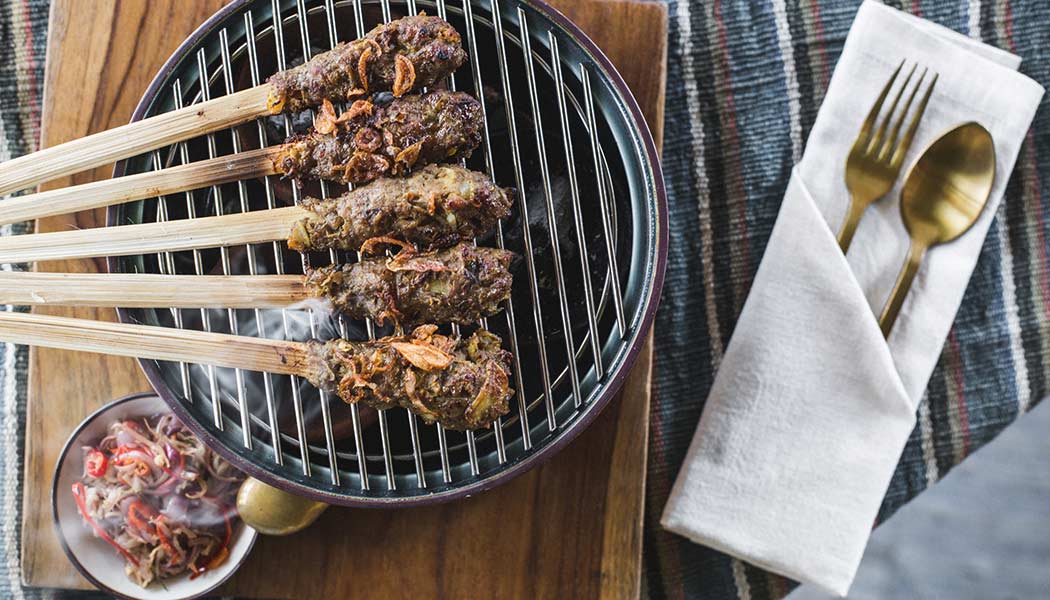 Chef Wayan hails from Nusa Penida. He gained a world of experience before coming to take this post. His deft hand with dishes that are often heavy in their traditional garb is skillful and restrained, bringing modern relevance to dishes that are time-honoured and true to their regional roots.

Lunch is delightful and both the single tables and the long sharing table are filled with animated diners, enjoying a culinary journey through the archipelago. 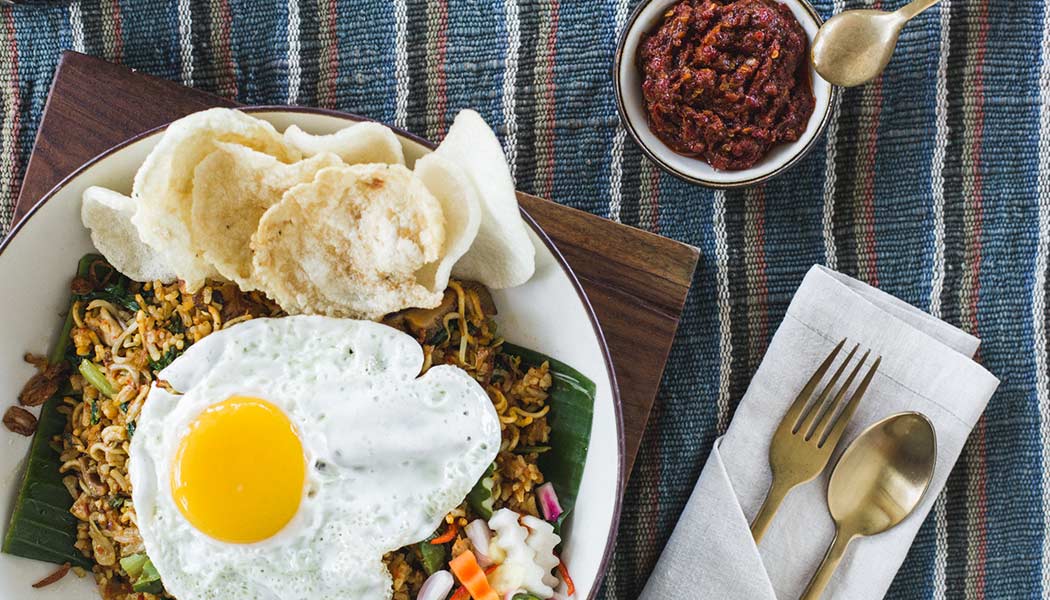 Three set menus offer a taste of East Indonesia, Bali and Java, or regional dishes from around Indonesia. There is also an à la carte menu. We chose to travel far and wide with the Indonesian menu. The dishes are offered family style, with two entrees, three main courses and a dessert alongside traditional sides and sambals. In fact there is a whole section of the menu dedicated to sambal, this alone is a highlight for the spice adventurers.

‘ From ancient rice terraces to untouched coastlines, Indonesia’s evocative landscapes are an endless source of inspiration for the Kaum kitchen,’ the menu informs us. And so our journey begins. 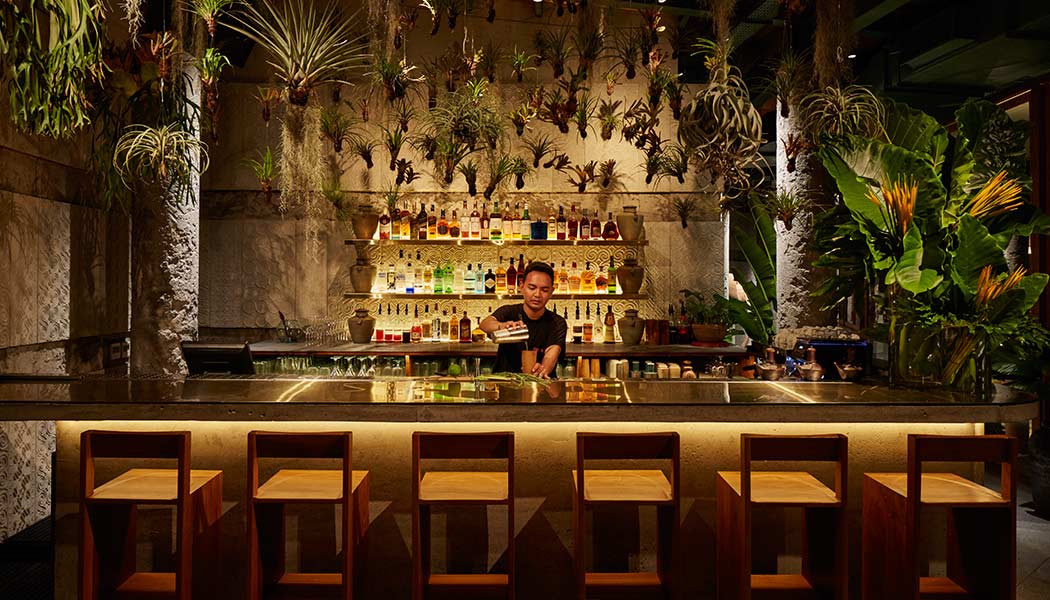 Gado Gado is a dish much loved around the world, originating from Jakarta, we are told. This dish sets Kaum apart from the start. The signature spiced peanut sauce can be gloopy and thick, here it is light and tangy, the flavours are beautifully balanced. A tangle of garden vegetables sits prettily on the plate, blanched lightly to retain their freshness, with a side of free range boiled eggs and garlic crackers, it was among the best versions I’ve tried. Most I wouldn’t order again. To be honest, it is not a dish I would ever order, so I was put to rights with this one. Goldilocks came to mind with the spice level, it was just about at the heat I could manage, not too hot, not too mild. Just right. 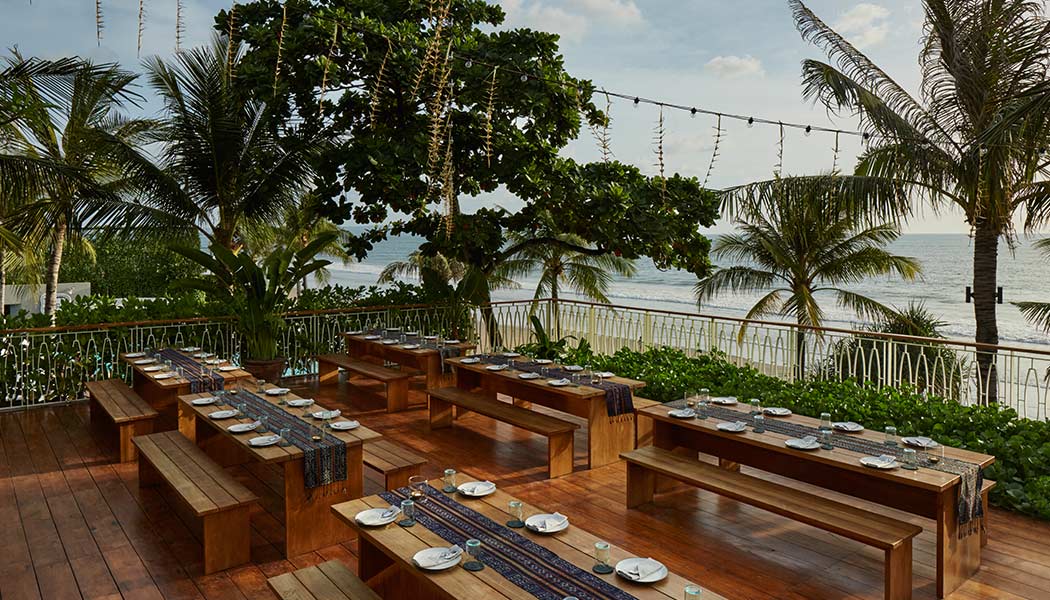 It arrived with a plate of sparkling fresh tuna, gohu ikan tuna, marinated in coconut oil with kenari nuts, ginseng leaves and rice crackers. This dish is inspired by the Maluku islands and it was just a little too tangy for my taste but very fresh, like an Indonesian-inspired ceviche. Lovers of coconut oil will adore it.

With our starters cleared away by accomplished wait staff, our chilled beaujolais a surprising match for the dishes. First up is a smouldering satay set with charred pork belly, Bali-style. A delicious sambal accompanies the satay babi kecap, made with sweet soy, eschallot and chili. There was no mistaking the flavours came from Bali. Delicious. Beside it was a soup made with beef short ribs and black nuts. The beef was soft and gelatinous while the soup was rich yet mildly spiced. This dish, sop konro, hails from South Sulawesi where the flavours tend to be sweeter. The traditional rice cakes soaked up the spices and melinjo crackers added texture. 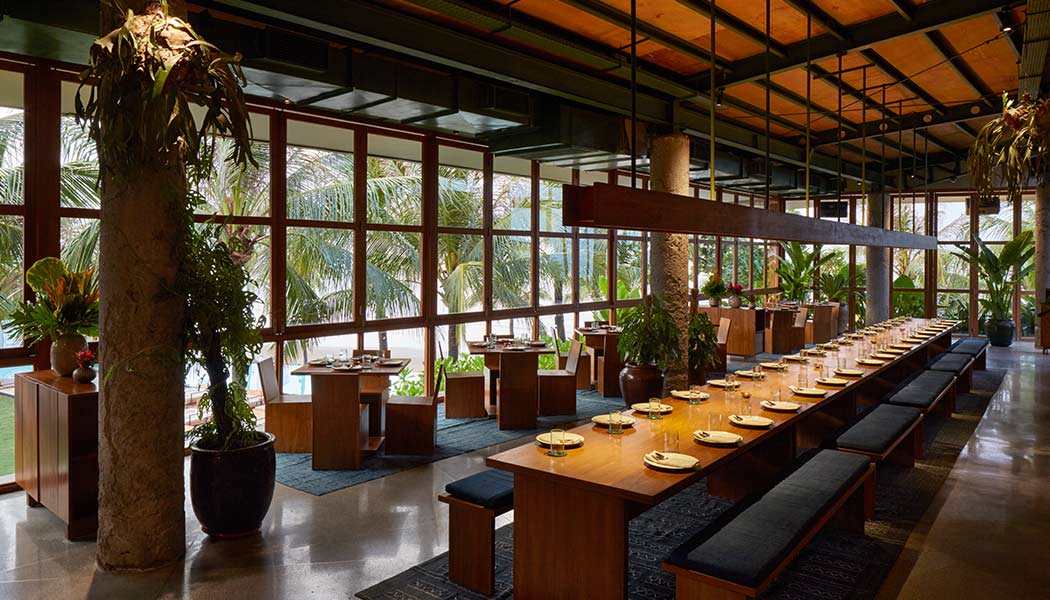 The final dish in the medley of mains was bebek bengel from West Java. A generous half of crispy duck served with a green mango and red chili relish. The duck was delicious, not in the pink French way but rather a robust market-style.

Aside from the cooking technique, the ingredients themselves are allowed to shine, which brings the local dishes up to restaurant quality. The duck, for instance, was not the tasty-yet-stringy local duck but a full-bodied beast. It was meaty and flavourful, accompanied by a fragrant pot of aromatic yellow rice with the traditional fried shallots to add texture. 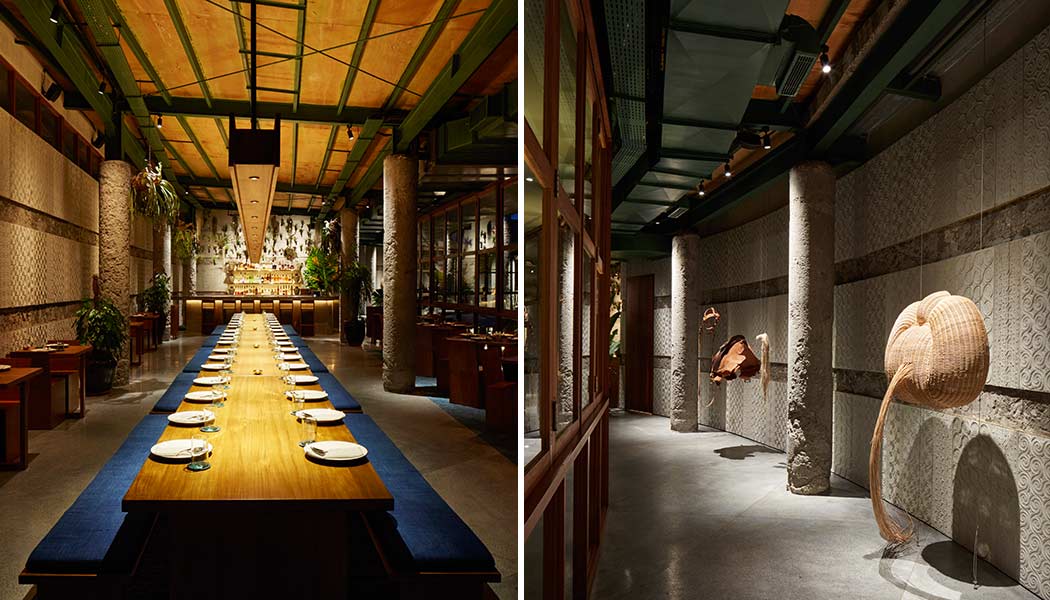 I make no apologies for our request to switch desserts. While the lapis jadoel, a spiced layer cake with caramelized pineapple jam, lemon curd and sorbet sounded very fresh, the East Indonesian menu offered a kue coklat from Flores and I am very happy to say it ticked all my chocolate boxes. An oozing, warm fondant-style dessert, it was served with shredded coconut cream and a coconut caramel sauce. The plate was expertly cleaned up so that no one need ever know we’d done the switch. It was fantastic. 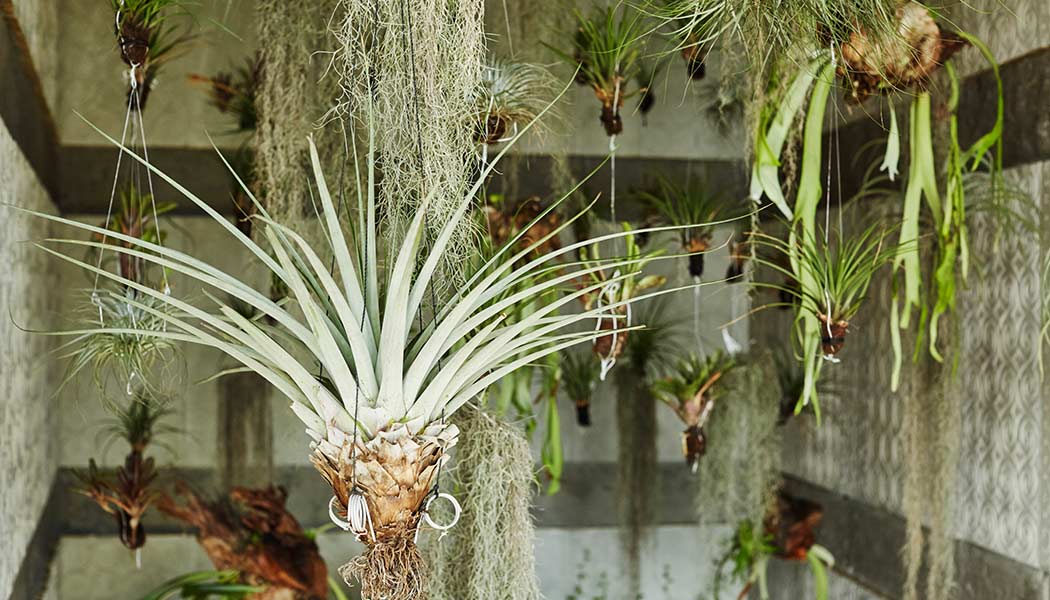 The set menus are very well priced, with an average cost of Rp350,000 per person. The wine list is generous with a choice of wines by the glass or carafe as well as full bottles. Sitting up here watching the bronzed bodies beneath us soak up the sun and cool off in the pool overlooking the ocean is a reminder that Bali is a holiday island and even those that have work to do can still bask in the glory of the endless summer, which makes it all feel so much better.