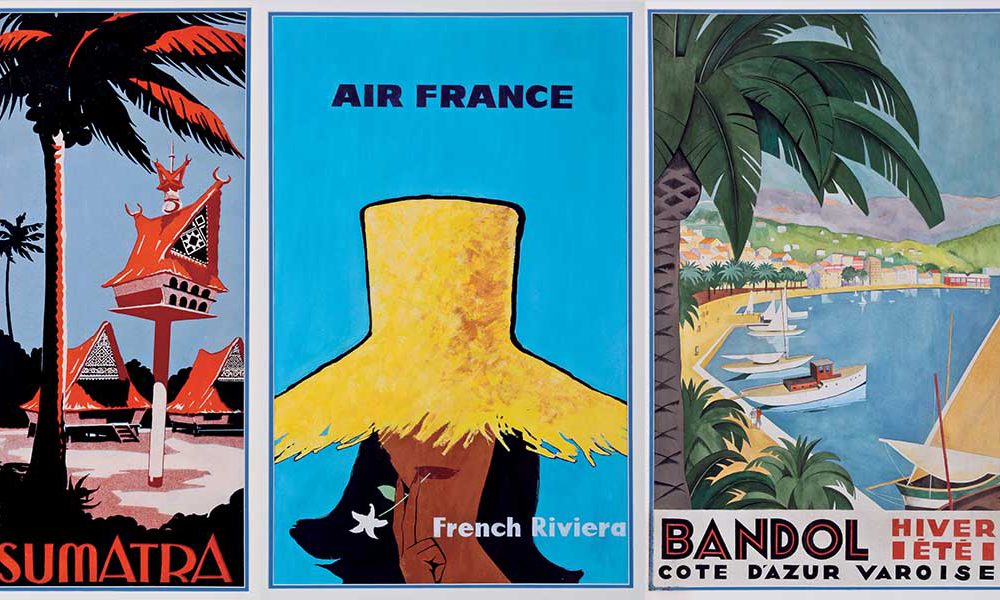 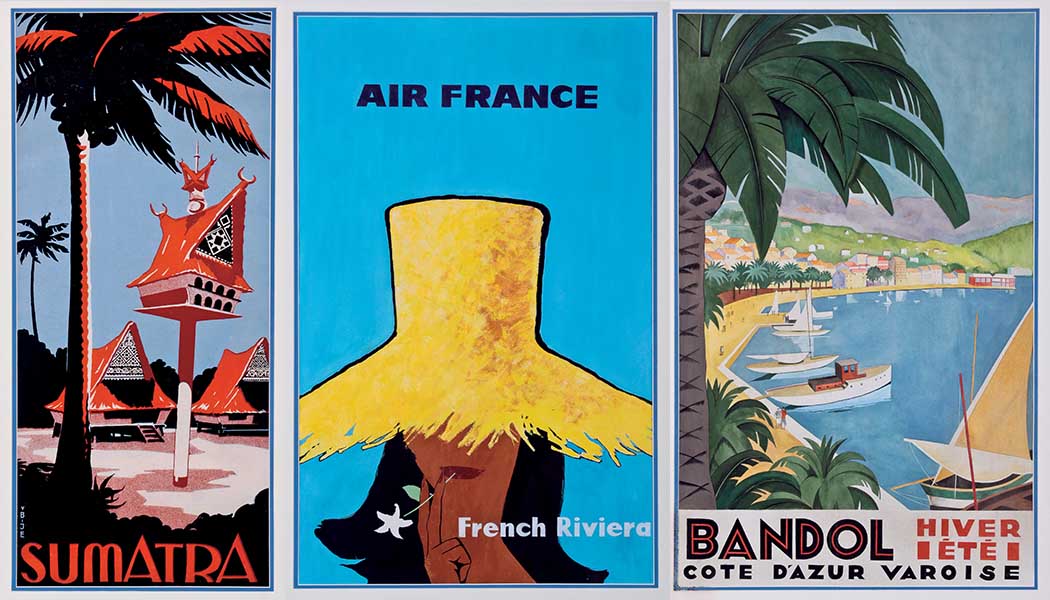 You’ve probably seen vintage posters depicting travel to Indonesia – the one with the Balinese woman balancing a basket of fruit on her head, a steamship plowing the sea towards “Batavia”, a Balinese temple at water’s edge framed by palm trees, a KLM propeller plane tracing a yellow route from Amsterdam to Batavia…

The popularity of vintage posters has exploded in the past 10 years with people all over the world collecting and displaying them in their homes and offices. Corporations are buying back posters they once discarded. Museums are discovering posters in their dusty storerooms and putting them on display. These activities and the last 30 years of ever-increasing interest confirm that posters are gaining recognition not only as wonderful decorative objects, but also as important artistic and cultural artifacts.

Travel used to be a slow, luxurious indulgence, remember? No, me neither, but I get a nostalgic whiff when I am face-to-face with a vintage destination poster. A vintage travel poster takes me back to a time when a journey took weeks and even months on a ship or train to arrive in a far-off exotic destination the likes of Bali or Java.

In the 1890s, advertisers, using the best commercial artists of the day, commissioned large private collections of poster art. Some of the best known names in fine arts started out as poster artists, among them Henri de Toulouse–Lautrec.

By the Roaring Twenties, tourism had become big business, and governments competed for prestige and currency by commissioning artists to produce scenes that would entice the viewer to take trips to exotic locales. The posters were hung on the walls of public buildings and kiosks in railway stations and across Europe and America. 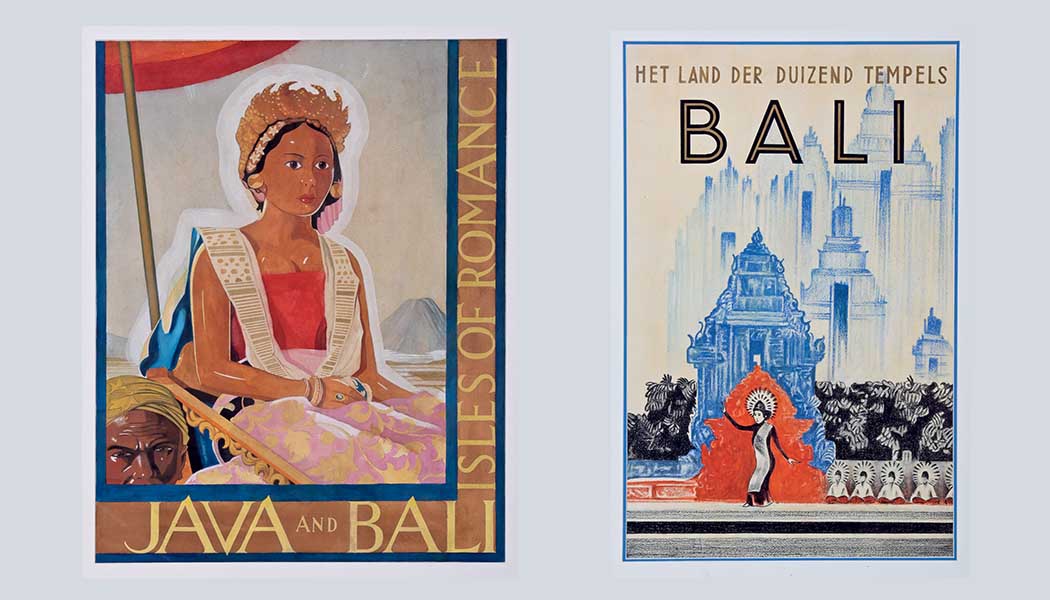 Stone lithography, a procedure refined and simplified in the late 1800s by a Parisian printer and artist named Jules Cheret (1836-1932) was the media of choice. By drawing the images on large lithographic stones, enormous posters were printed in vivid colour. The process involved as many as 17 individual colour applications, which had to be applied to each individual paper one colour at a time.

It is rare to find vintage posters on the market today that survived the ravages of time and abuse by the elements while posted as advertisements. Thanks to the fanatical collectors of the last century, many of whom acquired as many as 500 or more unique vintage posters, a limited number of the relics are still around for us to enjoy. It is their limited supply that makes vintage poster art collecting a good investment.

The value of a rare vintage travel poster is based on the reputation of the artist, the popularity of the image, the print’s condition, and its rarity.

I spoke with the owner of Sarah Stocking Galleries in Los Angeles. Stocking has been collecting and selling rare vintage posters for 35 years.

Sarah, what is it about vintage travel posters that makes them so popular?

Vintage travel posters are one of the last great values in the world of art collecting. They were created to entice a wider audience than, say, product posters, and therefore more of them survived, making them more accessible. The original posters of Java, Batavia (the Netherlands word for Java) and Bali are rare and represent a very small niche. There are a handful of people who want the few that are out there.

Whose idea were the travel posters in the first place?

Travel posters were commissioned by railroads, then shipping lines. After WWII, the airlines began producing posters. As travel evolved into a viable industry, Chambers of Commerce, local municipalities and government-sponsored tourist boards began to commission the artists.

US$1,200 to several thousand dollars and more.

If someone wants to buy a vintage destination poster, where should they begin to look?

With an experienced art dealer like myself or other vintage poster experts. The International Vintage Posters Dealers Association is also a good place to start. 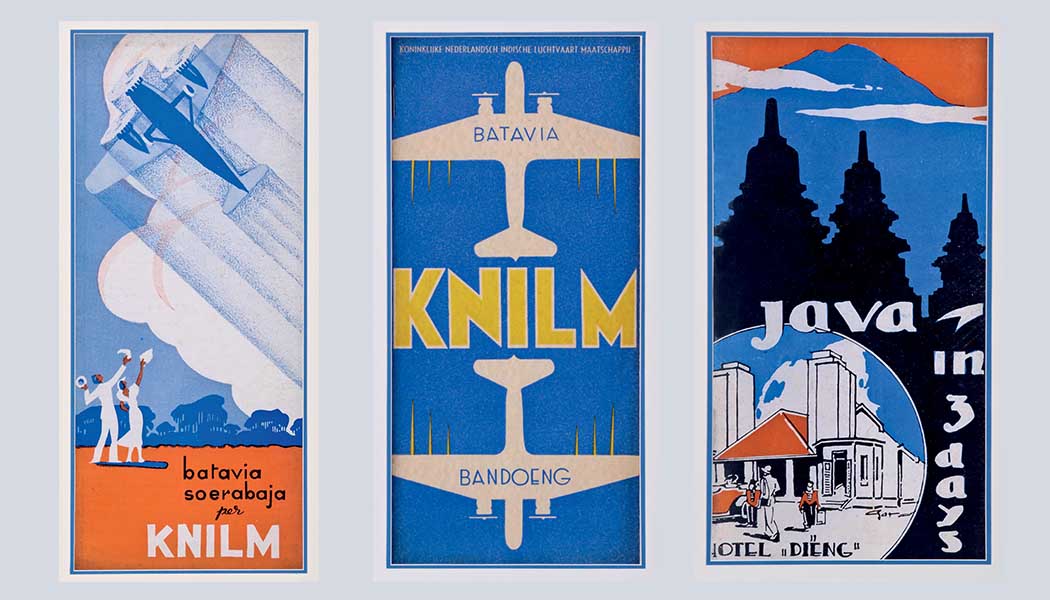 CHRIS Cloutier, a fine art poster collector, restorer and reseller, claims on his website www.posterfix.com, that the recent increase in the visibility of poster art has driven demand to the highest levels ever. Some posters have seen values triple in value over the past few years, with some commanding as high as six figures at public auction.

Cloutier advises potential collectors to choose their vendor carefully. The vendor should have experience with rare poster art, offer extensive information about the art form, and a guarantee from the gallery as to authenticity and origin.

One happy customer in this particular avenue of the collecting world is Karen Waddell, owner of Terrazzo Restaurant in Ubud. A collector of the rare and valuable travel posters, she grew up in the cradle of art collecting – her father’s business the Waddell Gallery of New York.

Waddell’s obsession with rare and valuable travel posters featuring Indonesia began as a fluke. “I was looking through poster art at a gallery in Chelsea, New York, when I saw one that said ‘See Java.’ I had to have it. The gallery owner told me there was a whole series dating from 1939 to the ’50s. She put me in touch with the owner of a Bali poster in London, and I added that one. One day a customer commented on one of the posters on the wall of the restaurant – he personally had worked with one of the artists. He led me to the KLM poster. Later, I saw a magazine ad with a Sumatra poster on the wall of an office. I looked everywhere for that poster, spreading the word far and wide that I was looking for it. My mother found it at last at an art show I sent her to in New York. The owner of the poster, as it turned out, lived five blocks from where I’d grown up in New York and where my mother lives to this day.”

In a day when travel conjures visions of long security lines at airports and being stuffed into and between miniscule airplane seats, it is no surprise that we relish art that reminds us of a time when travel was slow and luxurious and led us to unexplored corners of the earth.