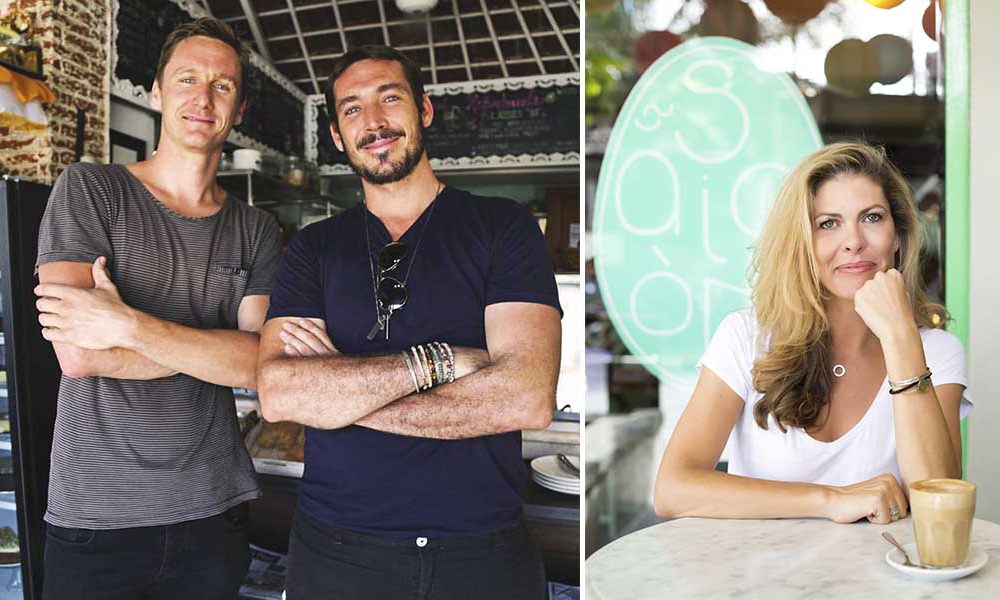 Byron Bay and Bali – spiritual twin sisters in a world of fashionable food? Ondy Sweeting meets the restaurateurs behind the Bay invasion. 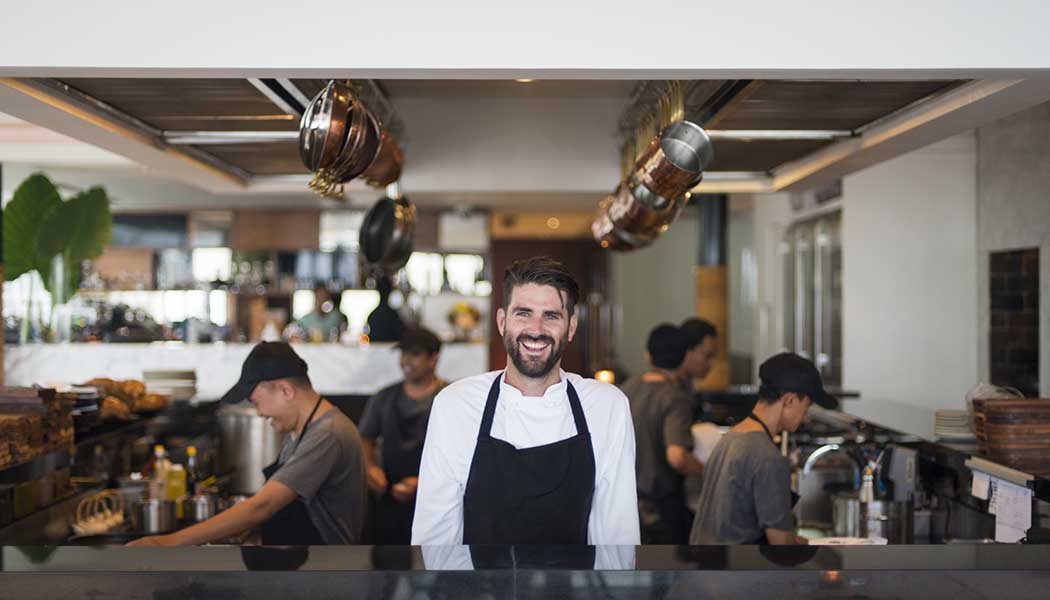 CITY dropouts long ago created a type of utopia in Byron Bay with farms that became biodynamic and a population that cared about the provenance of food. Then came kombucha, kaffir lime and the super subversive man bun.

Sound familiar? Bali, it seems, has been developing as kind of spiritual twin sister of Byron Bay. Just take a look at Canggu.

Byron native Pablo Fourcard’s Watercress Café in Batu Belig opened in 2013 to purvey delicious, healthy foods that are both local and sustainable for the earth. Success was instant and quickly fathered Milk & Madu in Berawa, Watercress Ubud and the new Bangkok Hustle Thai joint and Schmurger – concept stalls at Berawa’s night market.

Pablo’s elan was perhaps moulded during his idyllic bohemian childhood, growing up surrounded by nature and beauty, alternating life between France, Bali and Byron Bay before finally embedding in Bali. 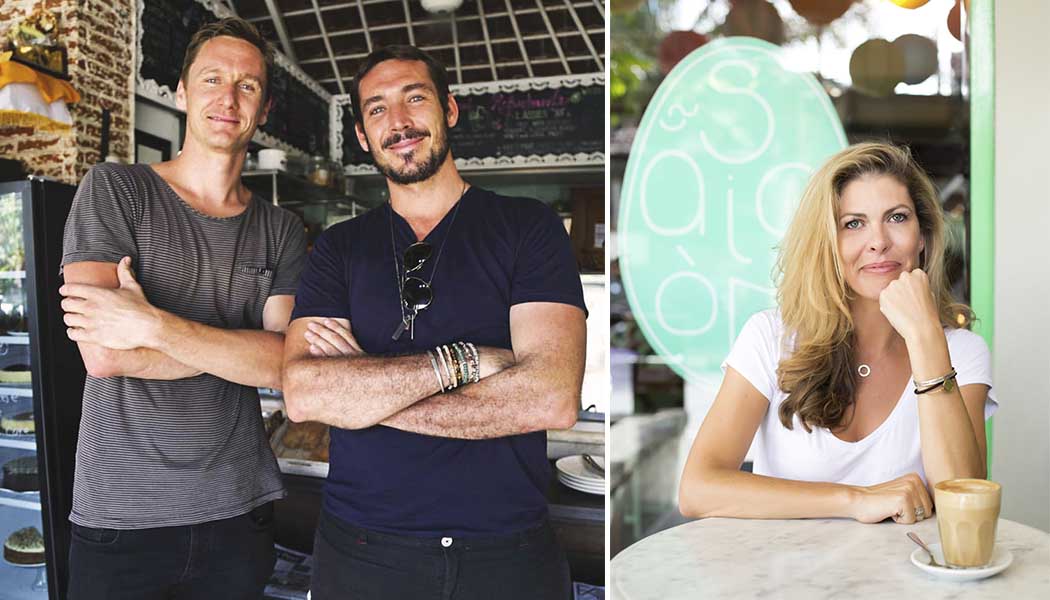 “When I finished my studies in Byron I travelled the world’” said Pablo, “but when I returned to Bali I knew I was home. I knew this was the place that I wanted to settle down and raise a family. It’s the smell of the monsoon rain, the incense in the offerings and the genuine interaction with the locals.”

Pablo believes both Bali and Byron have a shared history of being publicly outed as awesome destinations by a stream of adventurous surfers and wandering hippies.

“Both places promise a kind of alternative lifestyle,” he said. “Travellers visit Byron and Bali for that sense of spirituality and community with visitors and locals enjoying life together. Though a certain gentrification has taken place, both Bali and Byron maintain a fine thread to the past and still have a whisper of that old promise. Every single expat who lives in Bali has chosen to live here and that’s a powerful thing. They are artists, musicians and creators that have found a place that allows them to manifest their dreams,” he says.

“My family had recently sold our business Byron Bay Gourmet Pies and Pablo knew that I had a few dollars in my pocket, so he grabbed me while I was on my honeymoon,” says Jordie.

It seemed a good match given that Byron Bay Gourmet Pies not only sold the usual steak and mushroom combo, the chain had branched out into vegan products, gluten free and pastry made of ancient grains.

“It seemed right to pack up and move to Bali,” he said. “I couldn’t be happier to be here with my young family, great friends and a buzzing business.” Pablo sees the cafes as creative hubs where ideas are birthed and developed.

“We look at how we can do good for the community. The cafes provide an out for change and prosperity, the Byron Bay way,” he said.

Enter Byron born and bred Executive Chef Josh Job – who has been dipping in and out of Bali for years and has worked at Nusa Lembongan’s Sandy Bay Beach Club as well as Kokomo Resort and Beachhouse on Gili Trawangan. 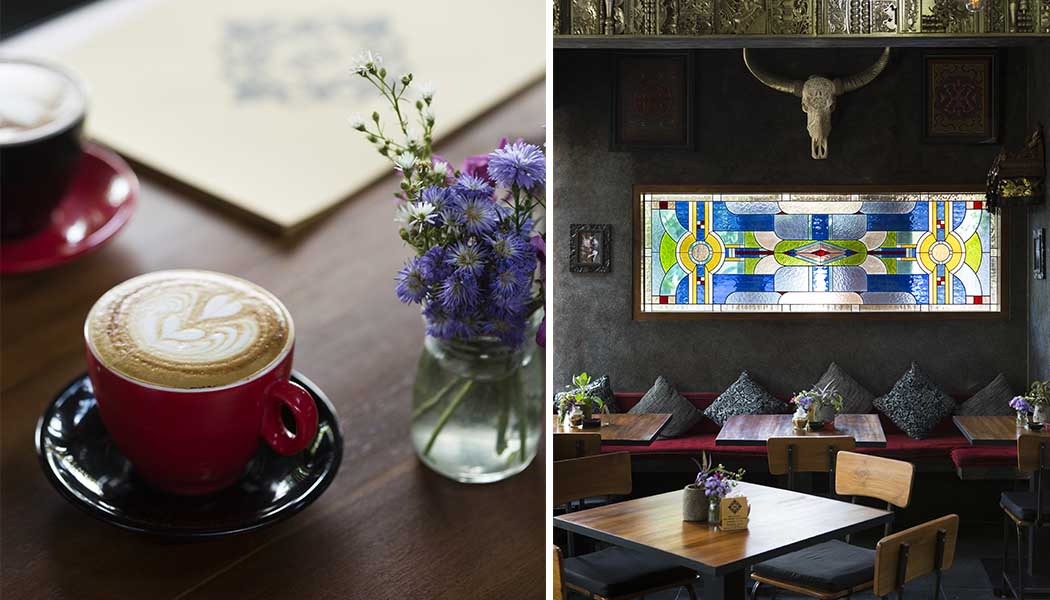 “Working with the boys is excellent,” Josh said, “as we are all on the same page when it comes to offering truly high quality, fresh and clean foods that are healthy and great to eat. We make food that people really love. The cafes are not just eating places, they are busy hubs and a part of the local community.”

Pablo couldn’t be happier with his new charge. “When Joshy came along everything just clicked,” he said. “We get each other and speak the same language in terms of what we are trying to achieve.”

At the top of the Byron Bay cooking cartel is the main man of high-end culinary offerings at Bali’s one and only Ku De Ta – Executive Chef Ben Cross. He’s the man behind the important collaboration with a host of international chefs called the Culinary Collective at the beach club’s fine dining and experimental kitchen laboratory Mejekawi.

Ben, who gets as amped in the kitchen as he does on a long lefthander at Old Man’s, jumped into his culinary career at the famous Rae’s on Wategos in Byron Bay. He has travelled the world since then and has pounded the pans in three-Michelin-starred Can Fabes in Spain along with Tom Colicchio’s Craft in New York. Interestingly, Vinnie Rae, who started Rae’s at Wategos, which he sold it in 1993 – is a partner in Petitenget bar and restaurant Shanghai Baby.

“I’ve been in Bali for nine years and am not even remotely thinking of leaving,” said Ben. “Bali and Byron offer similar environments. It’s surf, sun and no winter and what’s not to love about those drawcards?” 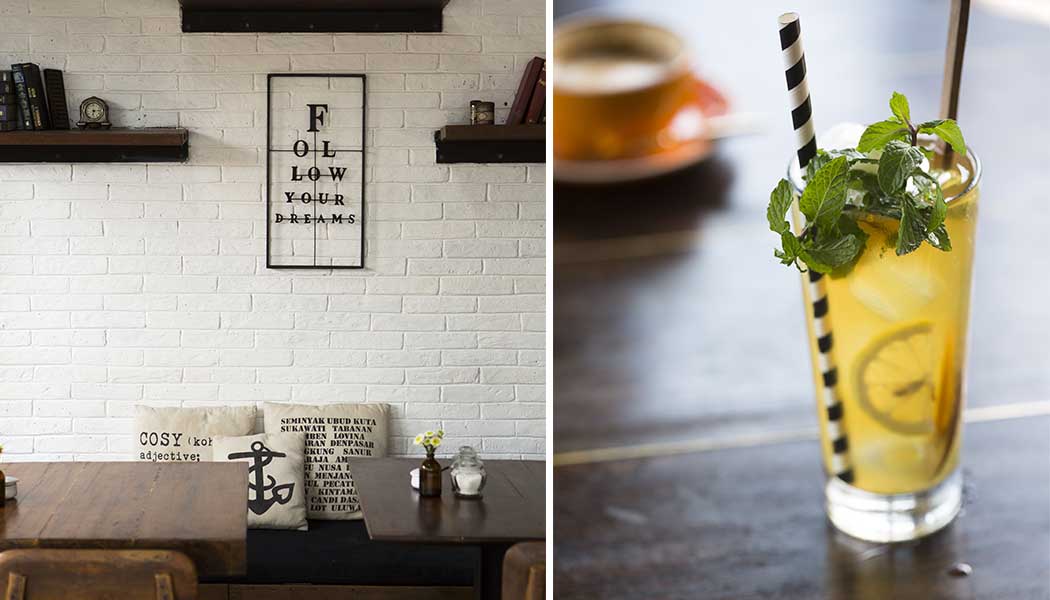 While the star chef cannot imagine leaving the island any time soon he does flirt with the idea of settling down in his hometown.

“I can see myself going back to live in Australia at some stage. Sydney is not really liveable anymore so Byron would definitely be the place to go. It would be great just to have a pile of money, to not have to work and go back to Byron and surf and set up a business,” he said.

“Byron Bay is a very open minded, freethinking community that’s highly accepting of people who live a life differently from the main stream, which is pretty true of Bali. In Byron hippies living in tepees are neighbours to conservative farmers – and it works,” she says.

Morgana started her hospitality career at the iconic Beach Hotel in Byron Bay, which was then owned by film producer John Cornell. She went on to live the dream in Sydney but returned to Byron after having her first baby. Then she had another one and as a single mum and turned up in Seminyak for a six-month chill. Businessman Andrew McLatchie spotted her skill set as rare and gave her a job.  Morgana then went on to work at legendry restaurant Sarong but really cut her hospitality teeth over five years at Cocoon Beach Club before she took on the launch and management of Saigon Street, which is owned by Aki Kotzamichalis of Ku De Ta fame. 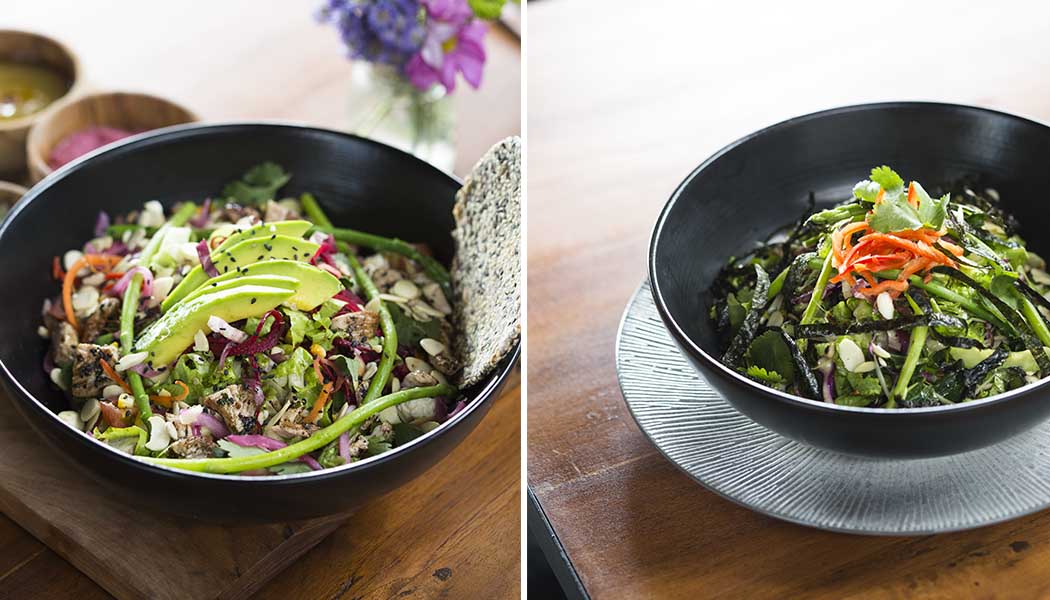 “I came here for six months and eight years later I’m still here,” said Morgana. “The kids love it and I have the best friends here that anyone could be lucky enough to have. Bali is a special place and so is Byron, which is considered sacred by indigenous people. While I like to think that the bright lights of New York City will be my next stop in all reality cities are awful. If I ever leave Bali, I would go straight back to Byron Bay,” she said.

Top Italian Chef Nicolas Lazzaroni was born in Casino, which is about 80 kms from Byron – virtually local in terms of that vast brown land. He honed his skills at Byron Bay’s Oriental Express and its sister French/Italo fine dining restaurant Bayside Bar and Grill.

Chef Nic moved to Bali when he was 21 years old to oversee the renovation and launch of Bridges in Ubud.

“We have a real Byron vibe in Bali,” he points out. “When I was young I worked hard in Byron and probably went to the beach six times. I was mainly in the kitchen. The Ubud years were similar to Byron in that I spent a lot of time in the kitchen. The reality is that it can be hard to tell the difference between Ubud and Byron. 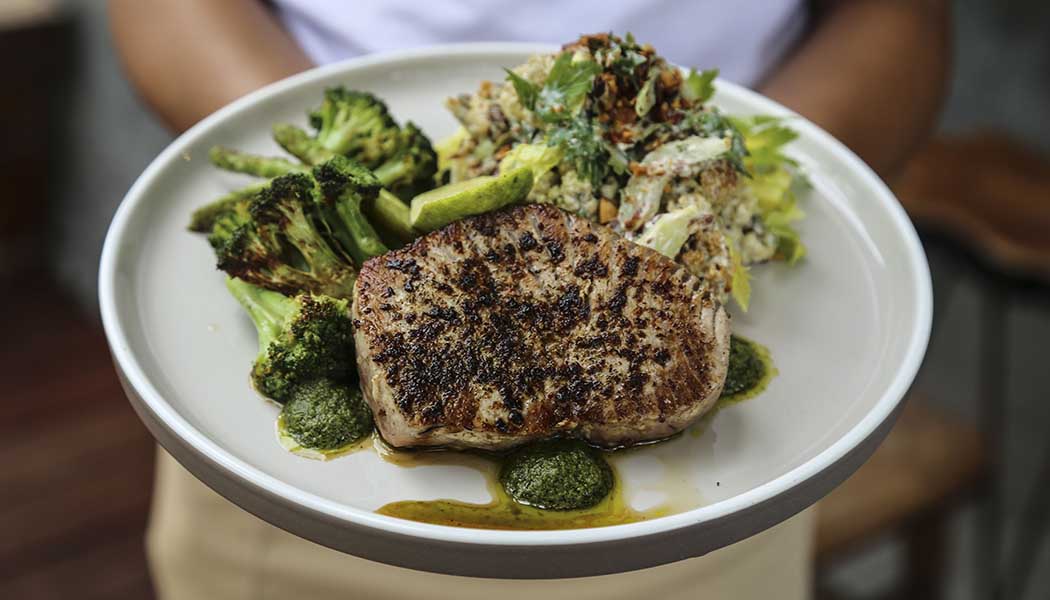 “Bali is a special place for me and has presented opportunities that I would never have had anywhere else. It’s been great for my career. I would not consider ever moving back to Byron, or Australia for that matter,” he says.

Nic went on to launch Seminyak’s gorgeous rustic Italian diner Settimo Cielo and he is now preparing to open his own venture in Jimbaran Bay. Opia Dining Destination is a big scale establishment that will offer Asian share plates and a view that is pure northern New South Wales with cliffs, a vast blue ocean and golden crescent beaches.

Among Canggu’s newest cafés is Veda in Batu Bolong – the first venture of Byron Bay locals Amanda and Sage Wieland. This pretty diner showcases the skills that Amanda and Sage have collected during their combined 45 years in Byron. Amanda tends the courtyard gardens with the love that she lavished on her permaculture work in the Byron hills, while Sage built the front café as an extension to the traditional Balinese compound in which the café is located. The beautiful result of their labour includes a stunning stained glass window, a gold metal carving and the rustic beam work.

Dedicated to artisanal produce, the Wielands make their own fermented foods including sauerkraut, kaffir and kombucha as well as sauces and sambals. The menu is as organic as possible with an ethos of paddock-to-plate. 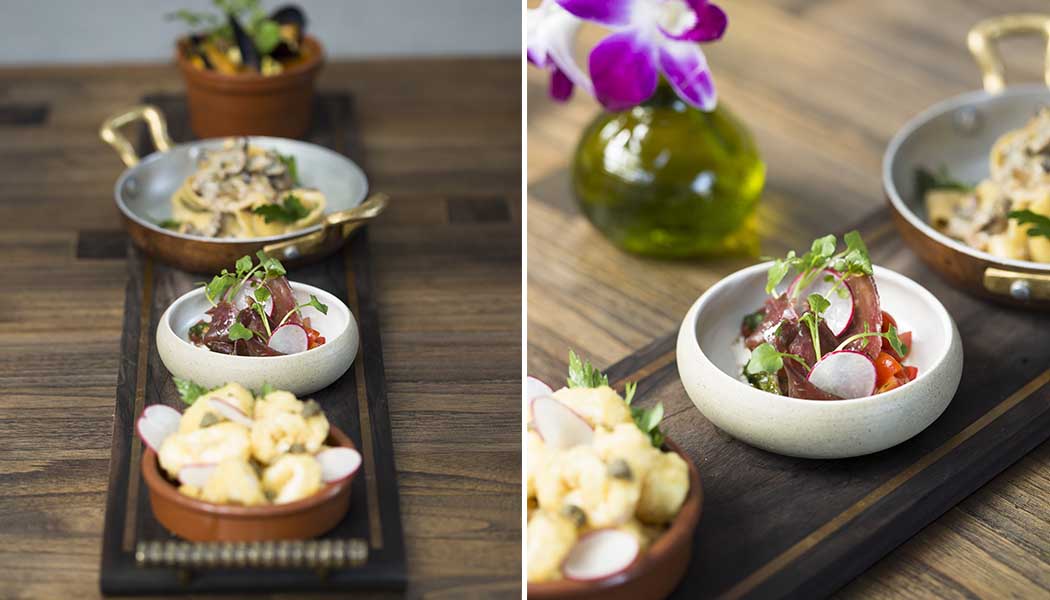 Amanda and Sage are long-time friends with a clutch of Byron boys including Jordie and Pablo, Josh Davies from Savage Kitchen and Jonathan Russell from Green Ginger and The Elephant in Ubud.

“Without these people from Byron Bay our path would have been much harder,” said Sage. “They are generous in making introductions from suppliers to staff. Without these friends I don’t think we would have even considered creating this café,” she said.

Josh Davies is the Byronian behind Berawa’s The Savage Kitchen and the executive chef of Chosen Experiences, an outfit that offers exclusive retreats worldwide that focus on wellness through fitness, nutrition and mindfulness.

Josh is as passionate about surfing as he is CrossFit and food, so Byron is an ideal second home to his Bali base.

Maybe Lord Byron was referring to some deep spiritual connection between these two sacred places that he could never have possibly known about in 1810: ‘Happiness was born a twin.’