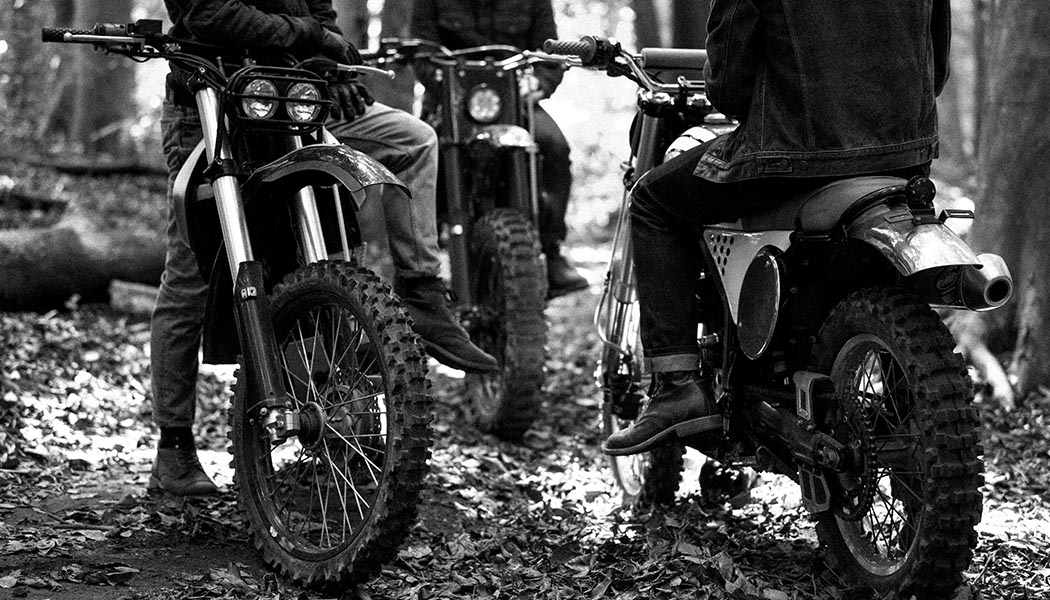 When you’re planning a trip the most important thing on the list is a few like-minded friends to accompany you on your journey, people who are there for the ride and don’t really care about the destination. So that’s what we did, a four man crew of mates; Forrest Minchinton, Lewie Dunn, Cal Lathrope & Thomas Edwards were our riders, we packaged them up with a couple of photographers and sent them off with nowhere in particular as a destination. 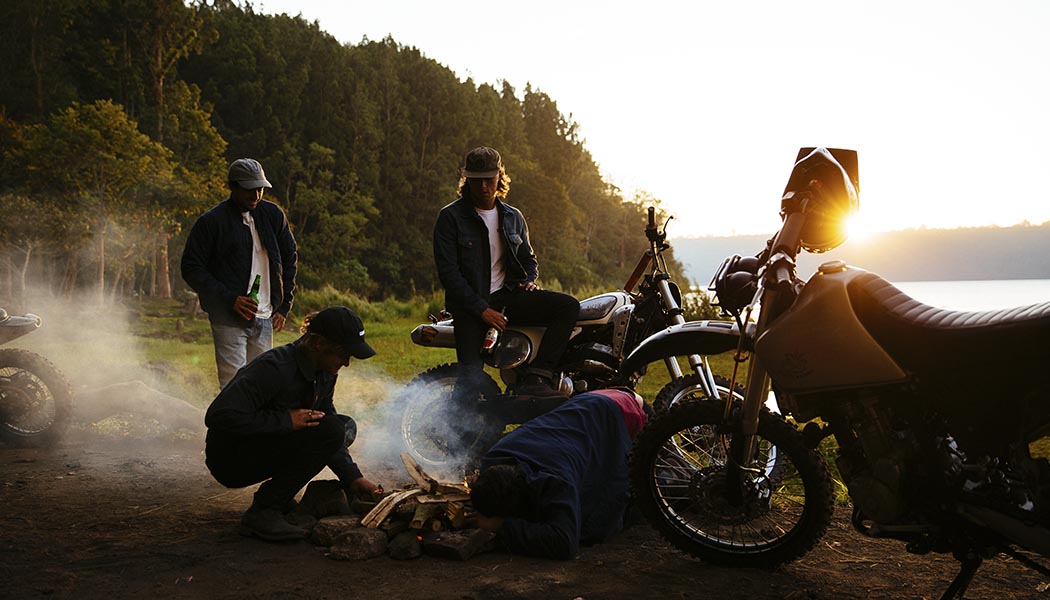 Being based in tropical Bali, we had become very accustomed to the coastal terrain offerings of the south. Low-tide beaches are our playgrounds and we know the trails through the terraced rice fields like the back of our hands. So, when the opportunity for this trip arose to test out a batch of new custom motorcycles from the Deus Temple Workshop, we decided to switch things up and point our compasses inland towards the island’s mountainous centre. 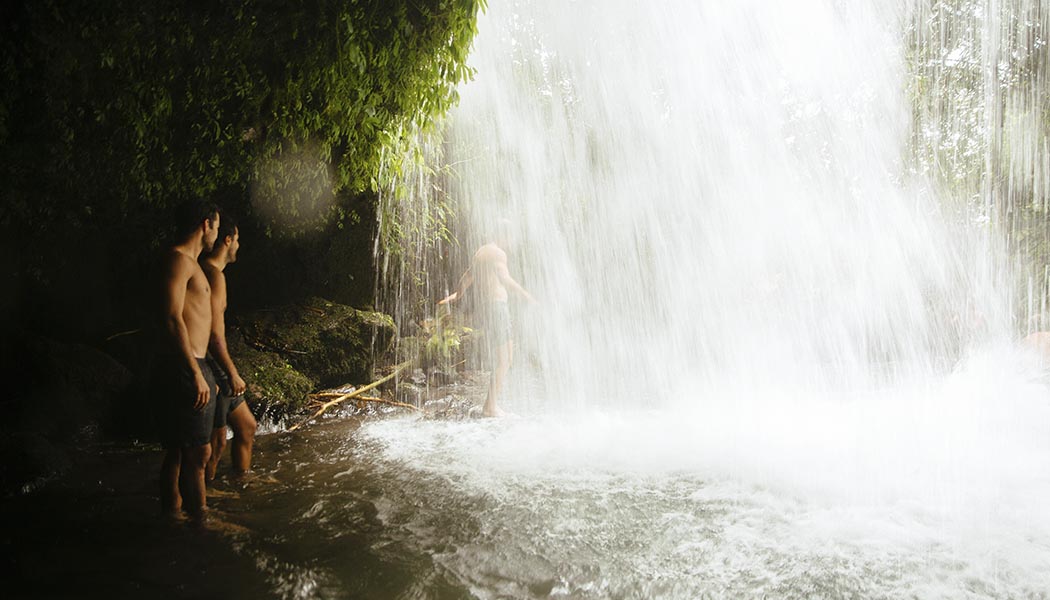 Before we get into the nitty gritty of the actual journey, let’s pause a moment and take a bit of a peek at the machines that took us there. There were three custom builds done by the Deus Bengkel Boys in the workshop down the back of the Temple backyard and then the fourth was a home build by our good friend, Thomas, who joined us for the adventure.

The three built under the Deus roof took quite different design routes when it came to aesthetics. Although all the bikes began life as factory standard Kawasaki KLX250s, this being the closest bike to a dual sport available to us here in Indonesia, each one stands on its own two tires as a custom motorcycle ready for touring the roads and trails we had in store for them. 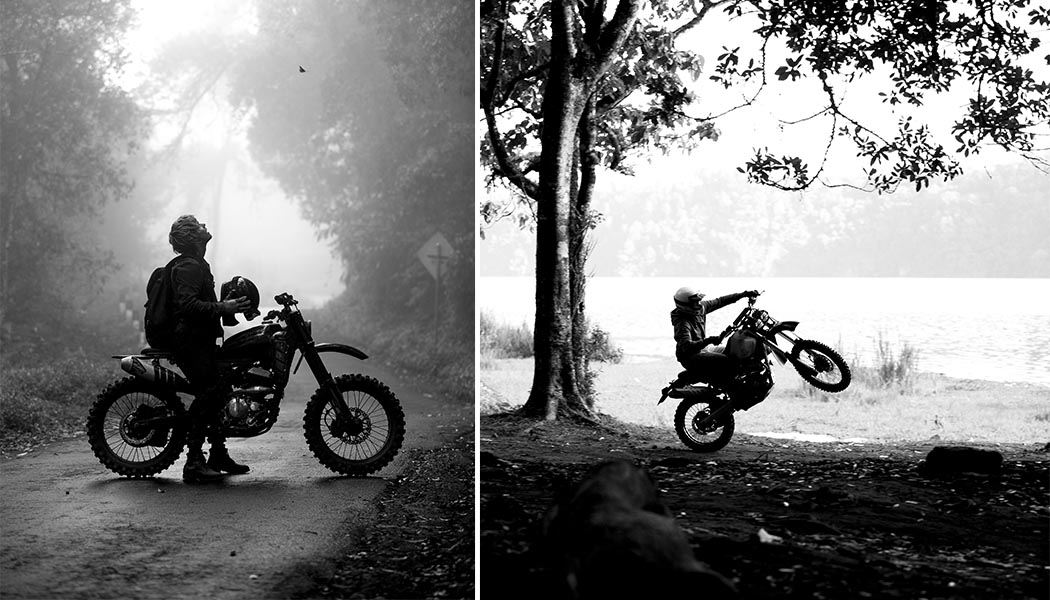 We need to give a massive thanks to a couple of legends over at FMF. All the bikes were sporting Powercore 4 headers and exhaust that helped our lads to squeeze an often much-needed extra chunk of power out of the engines whilst sounding pretty damn good, all at the same time. 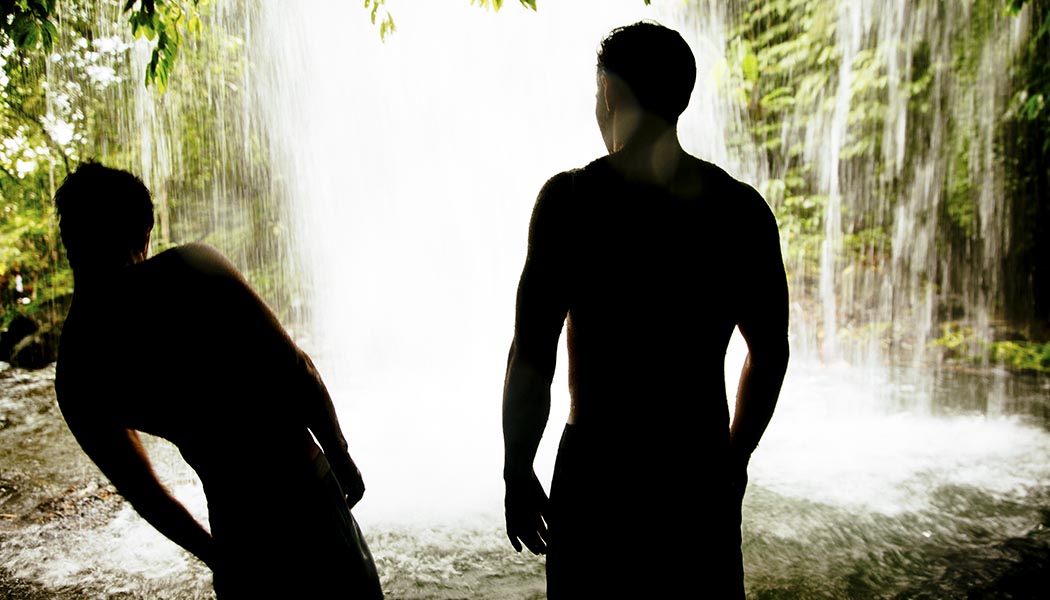 But back to the trip. Or forward, chronologically speaking. We didn’t really have much of a plan other than to head to higher grounds. We all agreed we should be searching for some cooler climates, something a little more agreeable than the thick humid air hanging around the coastline … So that’s exactly what we did. 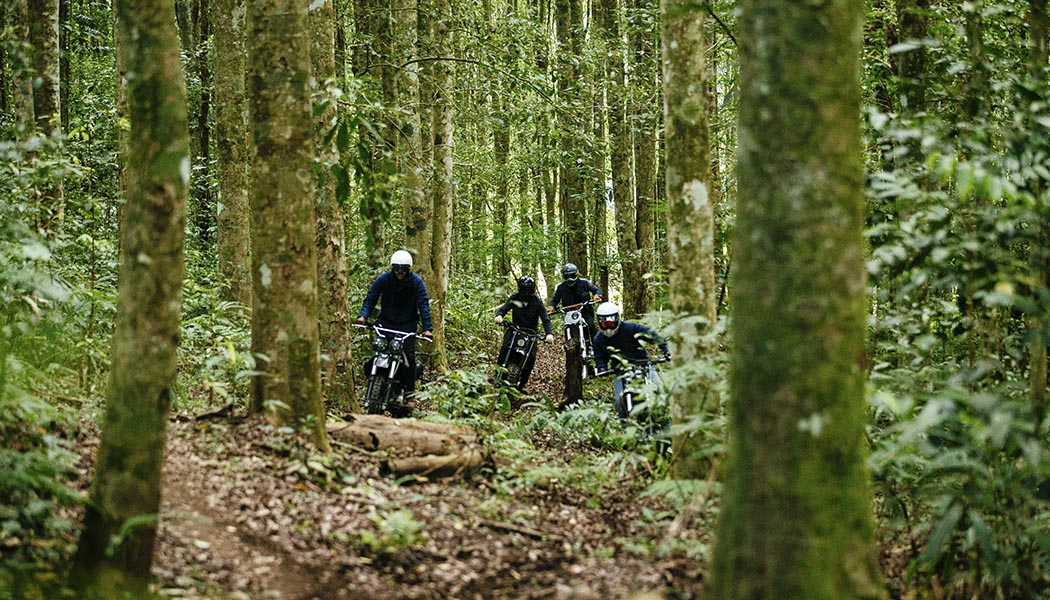 We made a left turn out of the Deus Temple of Enthusiasm in Canggu and just kept heading inland. A couple of hours put us where the houses grow further apart and the road rises. The air becomes truly clear of the sea salt and the urban congestion, bird song replaces horns, all the while rising steadily through switchback after switchback, headed to a lake we heard offered a chunk of reasonably flat dirt we hoped would be enough to pitch our tents on for the night. 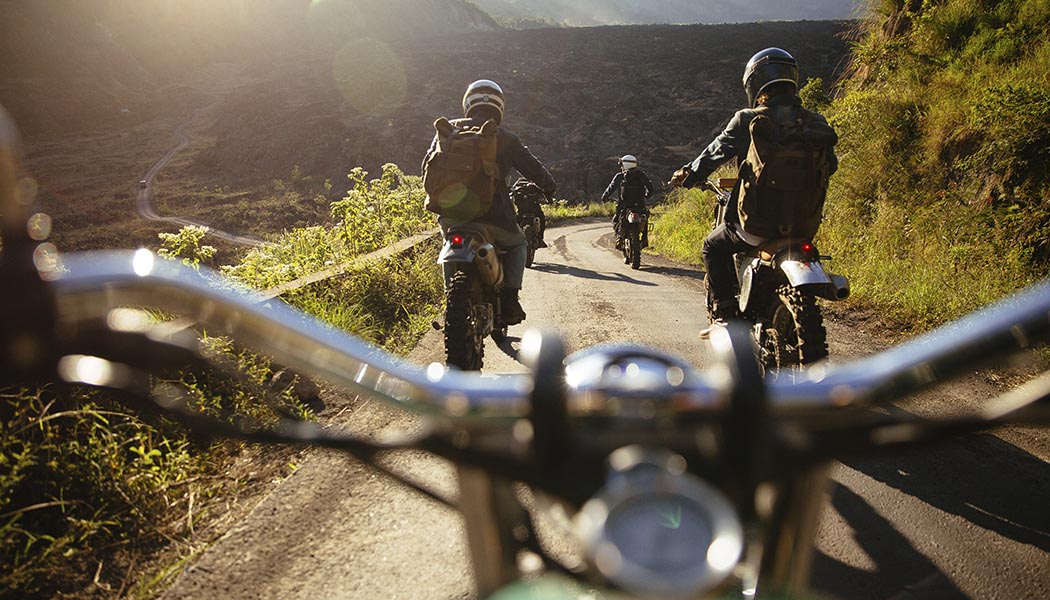 We reached the point where the road began its descent back down again. Dropping over the other side was like walking through a door or portal, gone was any sign of the tropic island we were on, tall pines hugging the hillside towered high above us, leading the way towards the lake.

Moss covered the stones by the side of the road and everything was kind of wet to the touch. It grew denser before finally opening up at the patch of dirt we would call home for the night. We were all very animated, first stretching our legs then unloading our bikes to set up camp. Setting up took no time at all as we were all itching to jump back on the unladen, lighter bikes and set to exploring the surrounding forest. 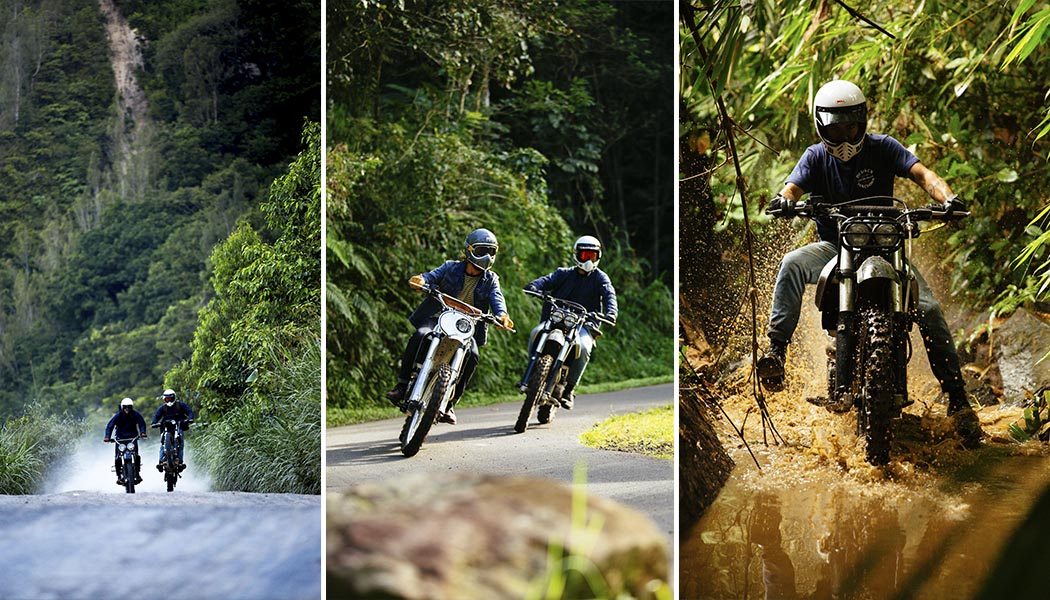 We spent the rest of the afternoon dodging stumps, picking lines and kicking up fallen leaves and before we knew it the sun was setting and with it the temperature. We headed back to the camp to get the fire going and mull over the day’s events with beers in hand.

After a beautiful, yet very cold, night under the stars and not wanting to get stuck in one place, we rose with the sun, pausing only to fuel ourselves with coffee before packing up shop and pointing our bikes towards the peak across the valley. Thomas had been there before and knew of place for us to rest our heads that night, so with him in the lead we set off single file along the tight foot tracks for a few hours until it was time for a break. 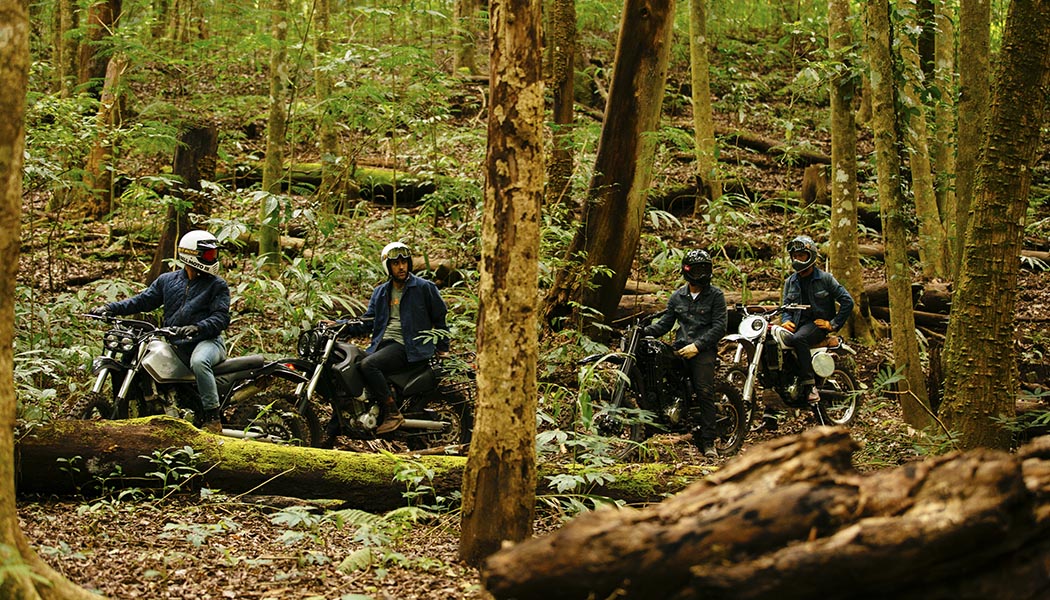 As luck would have it we happened upon a local roadside eatery, not hard to do as they are everywhere, and as we stuffed anonymous snacks into our mouths, we learned from the owner of a nearby waterfall. With nothing pressing on our schedule other than making it across the valley before sundown, we decided that a dip in the frigid mountain waters would be a good way to wash off the adventure musk of the past couple of days.

We left the bikes with the snack selling old man and hoped that his vague hand gestures would be enough to guide us down the hillside. After a couple of unwanted river crossings and a few pairs of wet boots later, we found the falls and spent the next few hours relaxing whilst discussing and admiring the sheer amount of raw energy cascading into the pools before us. 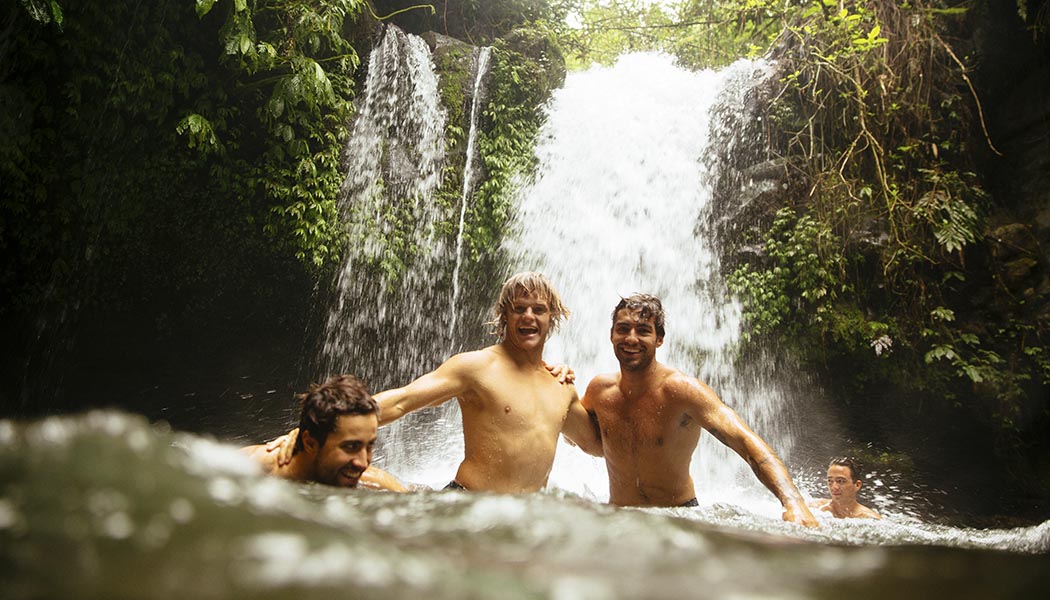 When we ascended we had mud on our feet and smiles on our faces. We thanked the old shop keeper, bought a bag full of his snacks, climbed upon our steeds and rode until we reached the spot to be our shelter for the night, arriving just as the sun was getting ready to set. 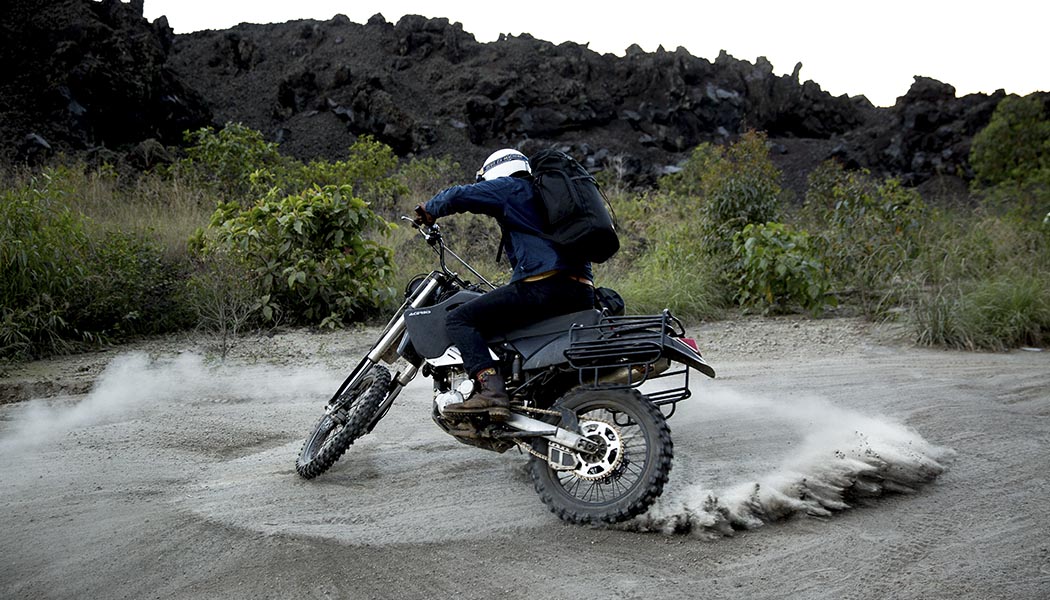 Next morning we rose with the light creeping up behind the volcanos on the horizon and went through the familiar process of packing our clothes and hitting the road. This time we decided to head to even higher altitudes and with nothing but exhaust notes burbling behind us we ascended until we hit the ridge-line of a large series of cliffs at the edge of a volcanic region. 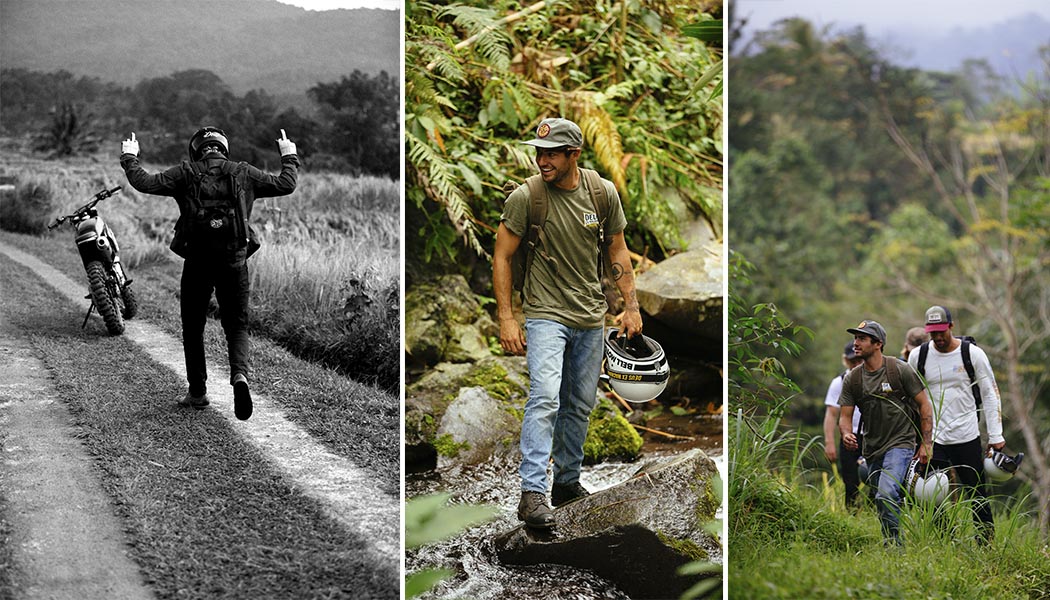 It was just before midday and we weren’t going to head back to the coast anytime yet. Instead we consulted our map to see if there were any off-road trails we could occupy ourselves with before finding once again looking for that flat spot, somewhere to hole up for the night. We wanted to get off the beaten track and ended up doing just that. 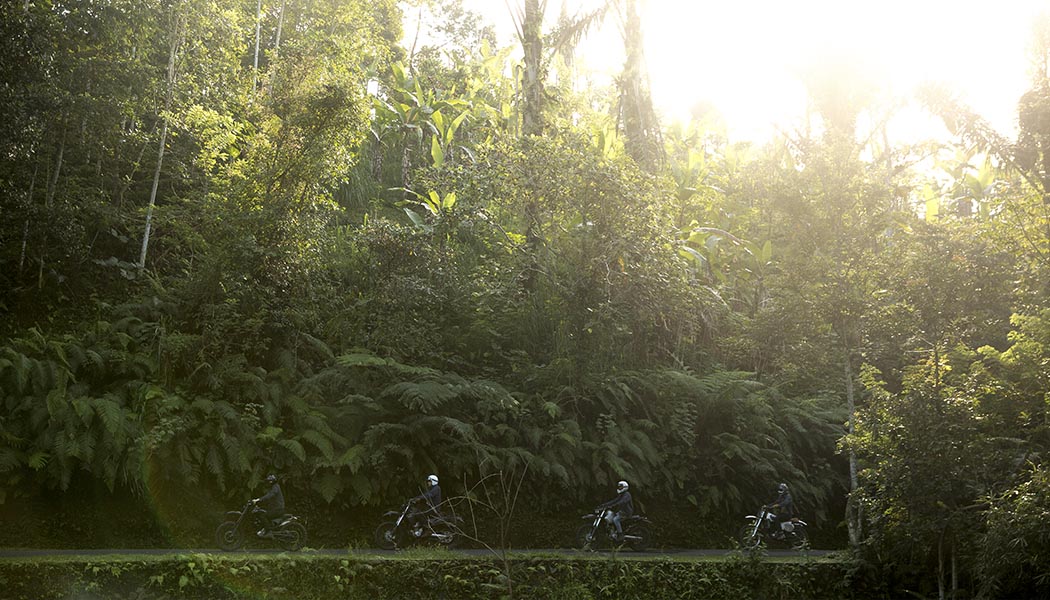 We could see that there was a trail linking a couple of paved roads that looked promising. So, we threw caution to the wind and headed in that direction. It was soon evident that the mellow single track we had started on was leading us down a path we couldn’t really turn back on. We followed the creek down the valley until we could go no further. The terrain we’d wandered into was in fact a little too much for the 250s. Just after getting the bikes all free and wondering what the hell we were to do a local farmer appeared out of nowhere and showed us a route back to the main road where we headed into a little town nearby to find some food, a warm shower and shelter for the night. 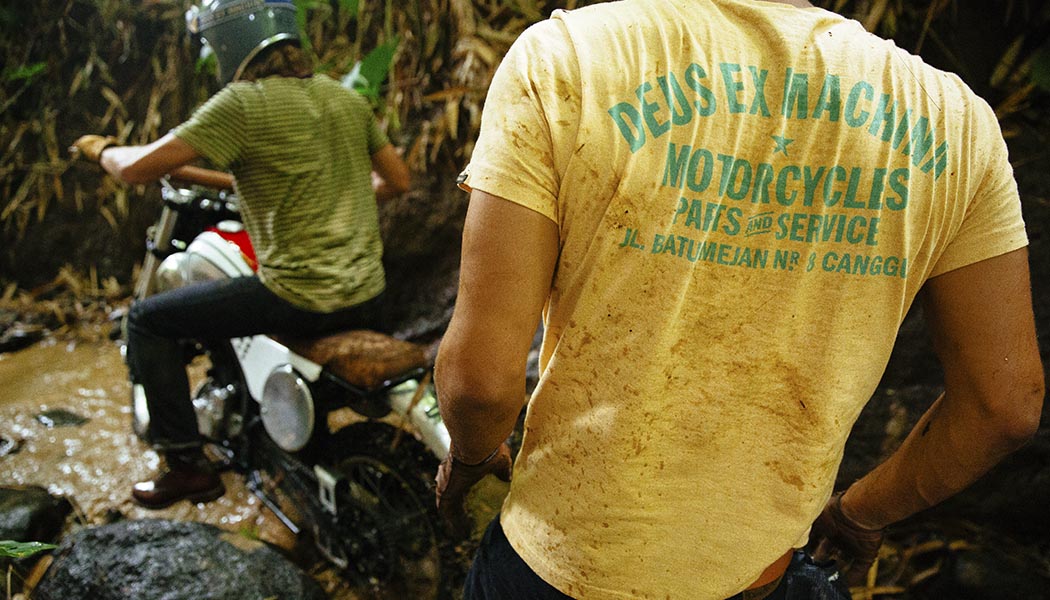 The next day, we were in the saddle long before the sun rose, we had a big day of riding ahead of us with little or nothing known about the road conditions ahead. For a while our headlights led us through the dense forest, blackness was absolute and all around, each of us following the trail set out by the rider in front. When the sun finally rose so did a huge cloud of mist that rode with us for the rest of the morning. Cold and wet and making our way through the trails a lot more than a little difficult. Our compass was set for the highlands of Mount Batur, a place where we knew a moto playground awaited us.

Here we found a park of dusty trails where we could really test the handling of our moto’s. Granules of a volcano spat out and laid down to make a bed that is quite perfect to ride on. The mist lifted with the heat of the day as did our moods and we once again adopted a devil may care attitude leaving dust trails in our mates’ faces as we played a grand old game of tag across a mountain side. Smiles were abundant. I guess that’s what it’s all about. 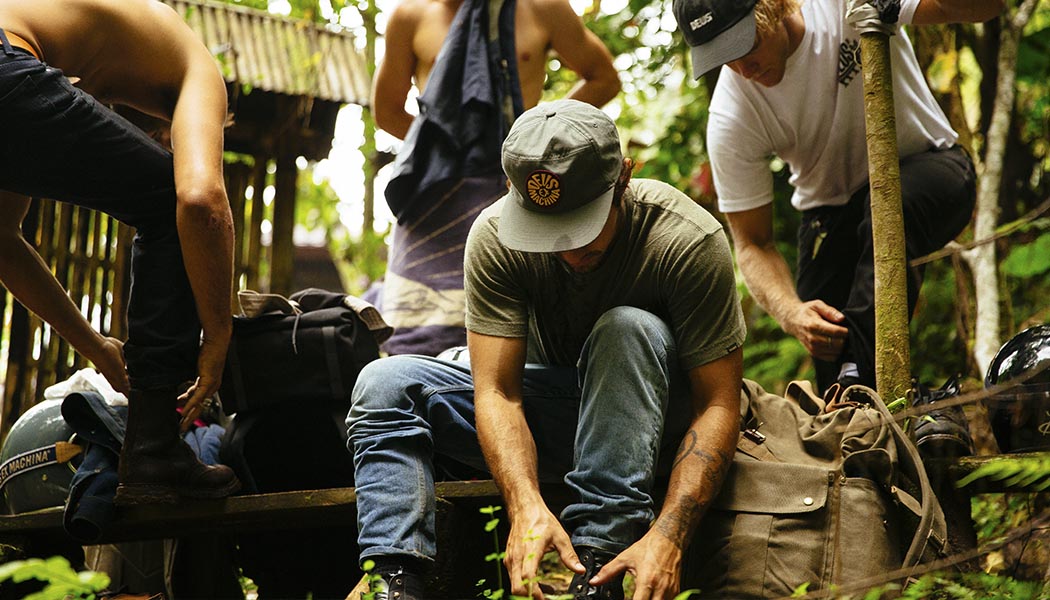 All in all, our goals and expectations of going inland and disappearing on bikes were beat, and bested. For some this had been personal, about doing things for a first time, or for betterment, while for others it was more about the experience of the place and the adventure. With legs that where numb, we followed the setting sun and headed homeward, back to the Temple. Thoughts went inward as we descended and the houses once again grew closer together and the warmth crept back into our bones before we experienced the beginning of a sweat under our riding clothes. The thought occurred, at least to us, a week on a bike in the mountains should be on everyone’s to do list.