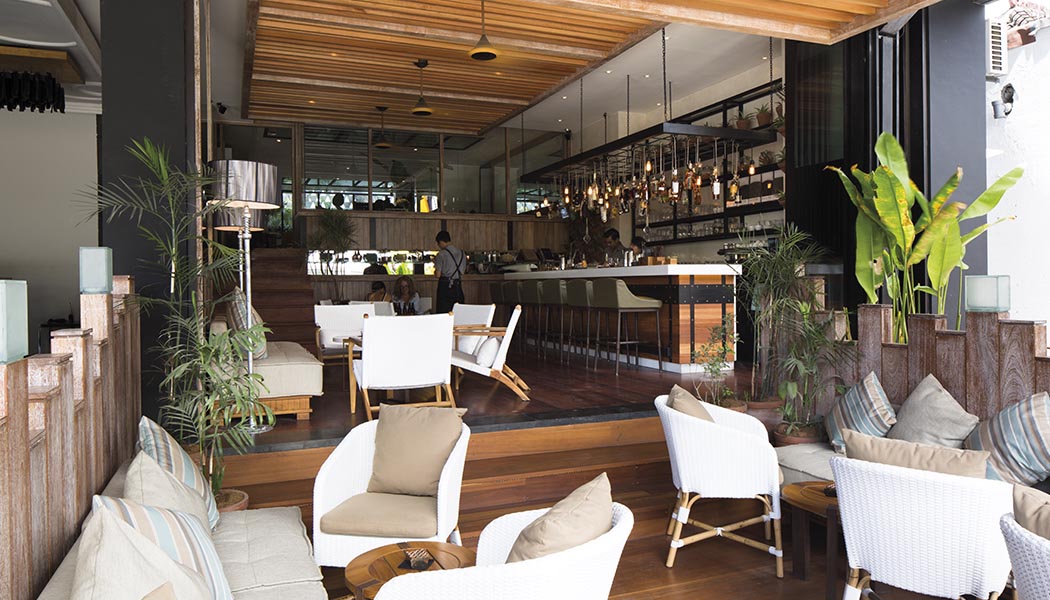 When it looks like parsley, smells and tastes like parsley, is it really parsley? These kinds of questions will occur to diners at Grow from time to time. If you have found yourself in the latest hot spot in Petitenget, well done, because you have stumbled across something that is fresh and new and combines a world class chef with a cruisy bar and a down-to-earth approach to both the menu and the prices.

Being a chef can be the most arduous task, or the most joyful. Taking simple ingredients, understanding their true nature, applying a little chemistry to bring out their strengths and combining them in ways that spark not only the taste buds but also the imagination – it is a real skill.

Ryan Clift is almost a force of nature himself. The rough and ready Englishman rolled over Singapore like a tsunami. With four restaurants and an armful of awards, he’s like a boxer with a tricky right, destined to surprise. From the fine dining Tippling Club to his latest rooftop farm to table diner, Clift has spent enough time in Bali to get the lay of the land.

“Every time I go out in Bali I’m surprised by the mark ups, it doesn’t have to be that expensive,” he tells us. I’m working with local farmers and suppliers on a reasonable margin to make it affordable for everyone.

Clift was captivated by the science of food from an early age and has worked with some of the best chefs on the planet. From Melbourne’s Vue de Monde, widely considered the food-driven city’s best restaurant for a time, he moved to Singapore and took the helm of his own restaurant where he introduced intensive modern gastronomy to the foodie island.

There’s more than a bit of mad scientist here, and if he wasn’t so cool, he might risk being labeled a food nerd. The other thing about the guy is that he can really cook. Smart food, modern food and we now discover very down-to-earth food as well. 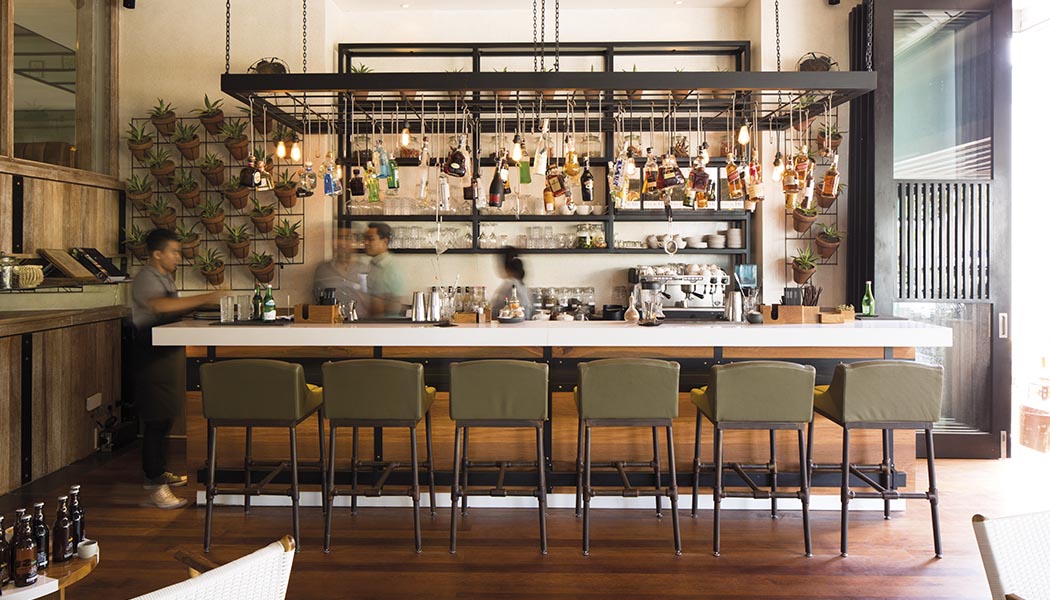 My first intro to Ryan Clift was at an Ubud Food Festival event held at Bridges. I was loaded with preconceptions that I would find the food, ‘too tricky, overworked’. The menu did nothing to assuage the sinking feeling that it was going to be weird. It turned out to be one of the most memorable and delicious meals ever. The menu was so light on detail it was almost non existent; beef, milk etc.

The foundations of his dishes are flavour and texture and he manages to elevate the simplest things to another level without being too tricky or changing its profile. Which is not to say that some of the techniques aren’t sophisticated or time consuming. Making it look simple is the trick.

Our lunch at Grow was earthy and delicious. First stop was the bar, where a few stragglers from breakfast remained chatting to the chef. The avant-guarde (his words not mine) cocktails were a definite pick me up, a whisky-based sour cocktail for me, a light and refreshing gin and cassis cocktail for my friend. The cocktails are serious contenders among the likes of neighbours Baker Street Social, Frestro, Saigon Street and Ling Lings.

Upstairs the dining room is still being finished, a bright and airy space overlooking the lobby bar. The staff is warm and friendly and keen to suggest the top sellers. A creamy potato and leek soup arrived in a bowl studded with roasted potatoes and large green leaves. The soup was poured over it. It did occur to me that the leaves were rather large but it wasn’t until the crunch happened that we realized these were parsley crackers, they added a richness of flavour and another layer of texture to the creamy soup. Based on his mother’s recipe, the menu suggests, it was a beautiful soup, vibrant and hearty without being too rich.

My entrée was a large, crisp nori cracker the size of the plate with marinated slices of tuna on a creamy avocado sauce, crowned with peppery watercress. Large for an entrée but great textures and flavor, light eaters could happily order this for lunch. 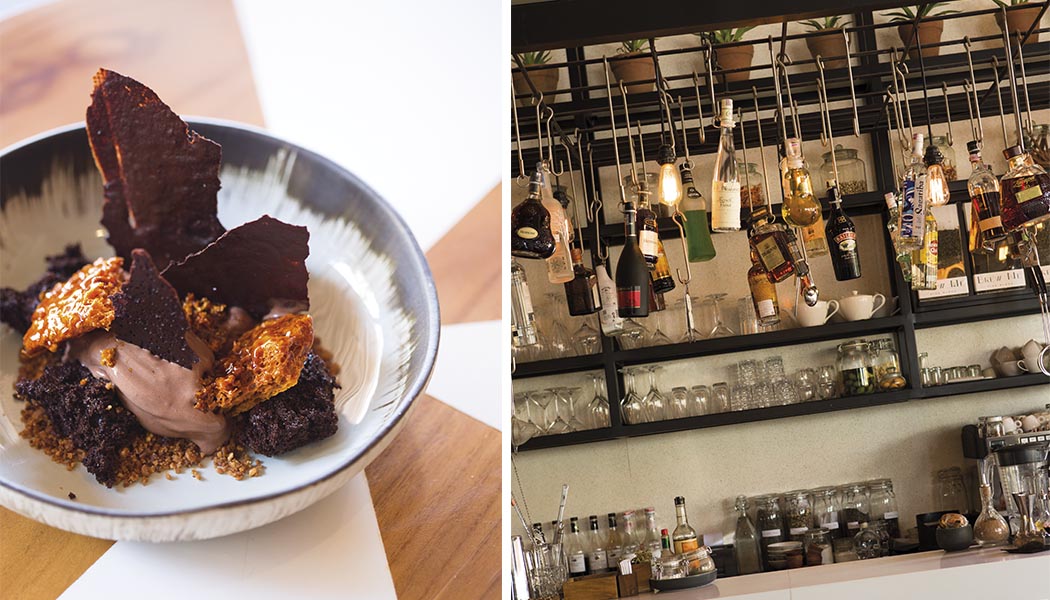 Clift has been creating his own organic garden on a rooftop in Singapore and is captivated with fresh, organic produce, both dishes offered a chance to show off his liaisons with local farmers which is a driving force behind Grow.

The wine chosen by my partner was a classy French Bordeaux priced around Rp400,000, a great wine for the price. The wine list is considered and not overly large but hits all the right price points and works beautifully with the menu.

Diving into mains cemented his description of Grow as an exercise in bistronomy, “Fine dining without the price,” explains Clift.

Next up, strozzapreti pasta with a 48-hour braised oxtail ragu was the kind of dish you wake up at night wanting, and I didn’t need to be told that the pasta was home-made, it was telling in every bite. Topped simply with parmesan and parmesan crackers and a scatter of pea shoots, it was delicious.

My partner chose the pork belly, braised and saucy, served with pumpkin puree, braised grapes, walnut and a marsala jus. The pork was melting, the pumpkin sweet and the jus provided a fruity finish. Both dishes are stayers on this menu I predict.

The rain was pouring down on this day, so our choices leaned towards the hearty, the perfect foil for the smooth red wine. Not a large menu, there’s still plenty to tempt.

Entrees range from Rp60,000 to Rp100,000 and include a bone marrow salad, duck and cashew rillettes, a Grow salad with fresh crab meat and the dish that has everyone talking, the steak tartare with confit egg.

Grow began simply and does double duty as the L Hotel’s lobby bar and restaurant. By the time you are reading this, Grow Up will have opened on the rooftop, giving the Seminyak crowd a new place to play. With a curated soundtrack, tapas Clift-style and quality cocktails, I’m betting I’ll see you there.

Walking the fine line between doing enough and delivering too much is handled perfectly at Grow. Open for breakfast, lunch and dinner and everything in between, with sunsets, cocktail hour and late nights upstairs, Grow is the kind of place you could just pop into, regularly.

As the rain is still pelting down we decide it would be rude not to stay for coffee and dessert. The bistro theme continues with a few subtle tricks employed to raise the interest. An orange meringue tart spiked with fresh basil was a winner while my lemon thyme panna cotta was an instagram moment waiting to happen with the smooth panna cotta woven between textured apple and a granny smith consommé poured over at the table. The fruits and the herbs worked perfectly together, a fabulous expression of what you can Grow.

theyakmagazine
•
Follow
Possibly even before the arrival of the Woolworth twins, Charlie Chaplin and Miguel Covarrubias to the shores of Bali, cocktails have been created and crafted, mixed, brewed and blended to include some of the tastes and flavors of this archipelago and beyond. Influenced by eras, music, countries and characters, The Yak went out in search of the ultimate Bali cocktail, from #Canggu to #Jimbaran through #Kuta to #NusaDua! Of course we didn’t find just the one – we found a few, and these are those! You can head to our website to see Yak's Top 11 Cocktails in Bali. Link in our bio! 🍹 . . #theyakmagazine #luxurylifestyle #bali #baliindonesia #baliisland #balihits #balilife #thebalibible #thebaliguideline #thebaliguru #thebalichili #balifoodies #baliculinary #balineseculinary #cocktails #cocktailsofinstagram #craftcocktails #classiccocktails #gincocktails #cocktailstogo #summercocktails #bestcocktails #cocktailstyle #signaturecocktails
View on Instagram |
1/9

theyakmagazine
•
Follow
Possibly even before the arrival of the Woolworth twins, Charlie Chaplin and Miguel Covarrubias to the shores of Bali, cocktails have been created and crafted, mixed, brewed and blended to include some of the tastes and flavors of this archipelago and beyond. Influenced by eras, music, countries and characters, The Yak went out in search of the ultimate Bali cocktail, from #Canggu to #Jimbaran through #Kuta to #NusaDua! Of course we didn’t find just the one – we found a few, and these are those! More cocktails will be coming soon on Part 2! Or you can head to our website to see Yak's Top 11 Cocktails in Bali. Link in our bio! 🍹 . . #theyakmagazine #luxurylifestyle #bali #baliindonesia #baliisland #balihits #balilife #thebalibible #thebaliguideline #thebaliguru #thebalichili #balifoodies #baliculinary #balineseculinary #cocktails #cocktailsofinstagram #craftcocktails #classiccocktails #gincocktails #cocktailstogo #summercocktails #bestcocktails #cocktailstyle #signaturecocktails
View on Instagram |
2/9

theyakmagazine
•
Follow
You might not possibly know that @chandibali was in fact the first roof top bar on Jl. Kayu Aya – many, many moons ago… A hotbed of cocktails and refreshing sounds, DJ’s and dancing. Currently, whilst not totally back to “normal”, Chandi did indeed open its doors back in December, offering Chandi-ites those fabulous Pan Asian flavours with a twist. Brasserie-style eating or relaxed fine dining – both descriptions are apt. Come ‘dressed up’ or just pop in for a bite to eat! 🤩🌴 Read more on MinYak July II 2022. Link in our bio. . . #theyakmagazine #chandi #chandirestaurant #seminyak #luxurylifestyle #bali #baliindonesia #baliisland #balihits #balilife #foodies #thebalibible #thebaliguideline #thebaliguru #thebalichili #restaurantbali #baligasm #foodporn #foodphotography #foodstagram #foodie #meatstagram #balifoodies #baliculinary #balineseculinary #petitenget
View on Instagram |
3/9

theyakmagazine
•
Follow
Welcome to The Yak's first New In The Hood IG series!! 🤩🏖️🌴 Come eat, meet or greet those who have just arrived, just opened or reopened their fabulous Bali doors! Swipe left to meet & greet your newest neighbors or help us by recommending some new venues in the comments below! 1. A wondrous hidden gem in Nusa Dua? Only you can decide, come down to Canna and see what all the fuss is about! For us it’s been an unparalleled day-to-night escape by the sea. Yes, it's @canna.bali who just opened this week! 🏖️ 2. A tranquil haven inspired by a Javanese-Hindu water palace! Wander through an ‘ancient' royal city by the sea, where every villa boasts luxurious modern interiors, a walled garden and a private swimming pool at @jumeirahbali ❤️ 3. A brand new 'Progressive Asian' eatery on Jl. Batubelig, Bali. Traditional cooking methods with modern flavours at @theariabali with a live rice-paddy view! 4. Who needs a pan or a stove when you have a perfect wood fire? Enjoy casual Argentinian dining like their traditional wood-fired asado @don.fernando.bali! 🔥 5. Looking for casual, Middle Eastern cuisine with East Mediterranean vibes? Ticking all those boxes is @sababa.bali! Our favorite dish? The Levantine Grilled meat best shared with your +1 ;) 6. Rossani Ferretti Salon is now in Bali (@rossanoferretti_bali_salon)! 😍 Exclusively at the new Healing Village Spa, Four Seasons Jimbaran Bay! 🤫 You should also check out DIOR first Indonesian pop-up store and concept cafe at Sundara Beach Club of @fsbali! 7. The most awaited @lostlindenberg is finally open in Pekutatan! Book now and lose yourself on a deserted black lava sand beach in a deep jungle of palm trees and sweet melancholic thoughts. Escape the mayhem and go get LOST! 8. Did you know that the biggest jungle pool club in Indonesia is in Ubud? Check out @kabanaubud to immerse yourself in the wonders of nature, music and cool vibes 🌴 (Part of the fabulous K Club Ubud - Grand opening 19t - 21st August!) 9. Last but not least! @arabica.indonesia will open their store in Beachwalk Kuta! "%Soft Cream Affogato” is a must-try to beat the heat from Kuta beach!☕
View on Instagram |
4/9