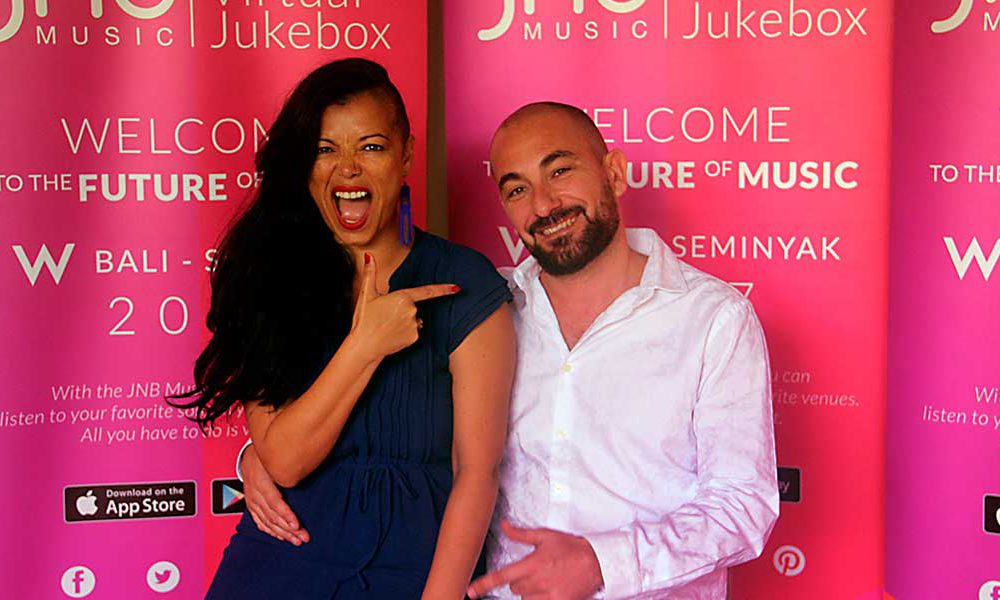 Bali music App aims to revolutionize how we listen to tunes in clubs, bars and restaurants. 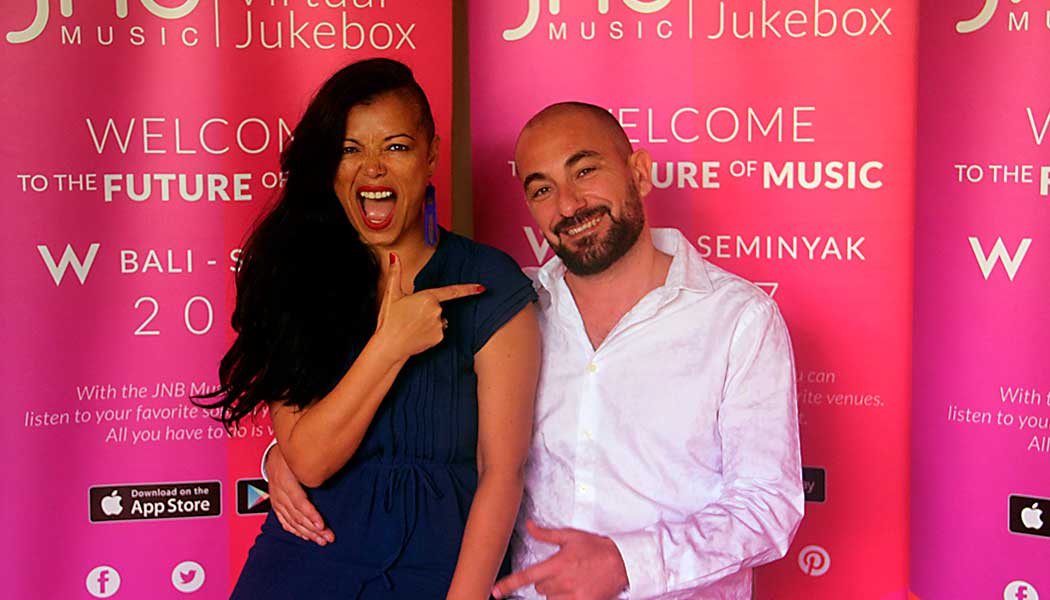 El Kabron founder Jesus Iglesias and partner Deborah Sass have launched an App called JNB Music which they say will do to music what Uber and Airbnb have done in their respective sectors.

The free App allows customers at clubs, bars and restaurants to vote on their favourite music from the venue’s playlist – the song chosen by the most people then plays next.

“Venues score more engaged customers who spend considerable browsing time and consequently more $$$,” said a JNB spokesman. “Brands get the opportunity to advertise directly to targeted users who can purchase their products on the spot. Most important of all for music lovers the world over, users can hear the music they want to hear.”

Iglesias and Sass have sentimental reasons for launching in Bali. Up until a year ago they both lived here. In fact the island is where the App was originally created, where they both met and fell in love and started working on the App together to bring it to global attention.

“JNB music is everything I have ever worked on in the last 15 years all rolled up into the one product,” said Sass, who has extensive experience in the music business. “Just as Uber changed the way we hire a taxi and Airbnb changed the way we book accommodation, so JNB Music will change the way we interact with music in a public space.”

How does someone living on a tropical island create something that changes the way we listen to music (hint: one venue at a time)?

Iglesias grew up in a small town outside of Barcelona, Spain, but his life was changed forevermore after his father was killed in front of him at the age of 12. Soon after he left school to work in menial jobs but with true grit, gumption and resolve by the age of 20 owned several successful businesses with a burgeoning team of employees behind him. Regardless of the lack of any real formal education barely out of his teens Iglesias was already something of a visionary.

Leaving Spain soon after to, as he puts it, “to find himself, surf and have a simple life”, Bali was just the first stop on the next stage of his life adventure.

How Iglesias created a world class restaurant and bought an island

Iglesias called Bali his home for 15 years, before pursuing his dream of founding one of the island’s most celebrated restaurants, El Kabron, perched high on a stunning clifftop in the Bukit. Building and establishing this establishment was also truly something of a life challenge for Iglesias. Undoubtedly it was his hungry passion for good food that finally brought the project to fruition, despite being warned the Bukit was too far away and no one would come. Determined never to let the doubters interfere with his mantra of bringing world-class cuisine to the high-end table in Bali, Iglesias continued to dream big. El Kabron is now considered one of the most lauded culinary destinations on Bali, not to mention one of the most deliciously appealing and enticing.

That mission accomplished, Iglesias then set about on his next challenge – purchasing a private island. Sticking to his vision, he became part owner of Kanawa Island, 45 minutes off the Island of Flores.

His next venture, JNB Music, was born out of the lack of control of the music played in the venues he frequented. “Why could my father, or my grandfather, choose the music they wanted to hear decades ago,” he reasoned, “but now, even with all the technical advances, we can’t choose the music in most venues?”

Iglesias had never developed an app before, never worked a corporate job and until a few years ago didn’t even own a pair of shoes. He spontaneously bolted together a group of like-minded buddies, raised the covering capital of €800,000+ and deftly crafted his sonic ideal. Due to the limited experience of the team, however, the app was still missing a vital element to bring it fully to life.

How the Sass Factor made all the difference

Deborah Sass left her career as a music business executive in Los Angeles to move to Bali in 2014. Little did she realise not only would she become part of a global music movement, and end up not leaving her beloved music biz career for very long, but she would also meet the love of her life. It all started one Friday night over a cocktail in Metis, one of their favorite joint venues.

Sass grew up on a council estate in London and like Iglesias had no formal higher education. Unlike Iglesias she spent the last two decades moving up the corporate world, starting in radio in Australia, then returning to her hometown of London to work in its bustling media hub. From there Sass quickly made the giant leap forward to the surging Digital Music space with the likes of niche brands Amazon, Shazam and Spotify, all now household names and media giants.

Shifting across in 2007 to the nucleus of the global record business, Los Angeles, Sass pioneered work on finding the missing link between the music biz and the IT world. She worked closely with the major record labels, esteemed industry associations like the Grammys and Emmys, plus virtually every important music business event worldwide. With a decade and a half honing her skills Sass has clearly proven her capabilities in launching and running a global business.

JNB Music held its own inauguration in Bali in January

On Friday, 13 January 2017 Bali hosted the official global launch of JNB Music at the peerless setting of the W Hotel Seminyak.

Bali is now just the first of many territories and cities where music lovers will be able to choose the sounds they want to listen to when out and about enjoying the good life. Team Iglesias and Sass have an aggressive rollout plan to launch their app in the top 40 countries within a three-year window.