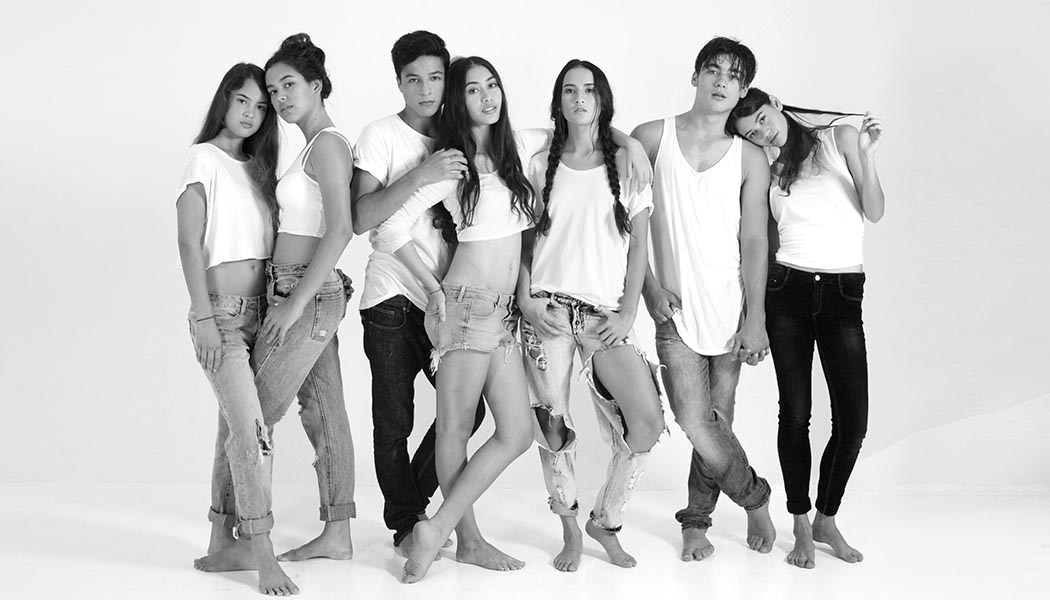 ON a sunny Saturday in the photography studios of Deus in Canggu seven strikingly beautiful teens gathered for a photo shoot. They look like any other bunch of almost-20s; with their torn jeans, midriff tops, and impossibly long manes of hair framing their youthful essence. Even more conspicuous, to me, than their unique beauty, is their very obvious self-awareness, cultural sensitivity, and sense of humility.

I had the pleasure of sitting amongst a crowd of young adults to discuss life growing up a prodigy of East-meets-West; children the result of the love affair between Indonesia and the rest of the world. At times tested by high profile political discord or the threat of terror it is a relationship that regenerates to stand the test of time.

The western world has been infatuated with Bali and its people since the lure of spice invited European colonisation of Indonesia in the sixteenth century. And East has been acclimatising to the Western influence ever since.

An interesting by-product of this cultural evolution seems to be this group of mixed children; half Indonesian, half Caucasian. Self-described as being “too white to be black and too black to be white”, they exist in a grey area demographic, in which the resounding sentiment was that they find it a challenge to seamlessly slip into either parents’ specific race, religion or culture.

One with a clear Australian accent, another slightly Dutch – the rest of these teens have adopted a jumbled, almost American-sounding International school enunciation. Between shoots, they sit splayed across couches as any teenagers might – for our biopsy of home life, social life and future plans. The conversation revolved around a common theme: where and with whom do they associate?

On this day; as they modelled traditional headpieces as an ode to their Indonesian heritage, sipped on sodas and giggled in between takes, we interviewed them and found a place in which they each surely fit … with each other. 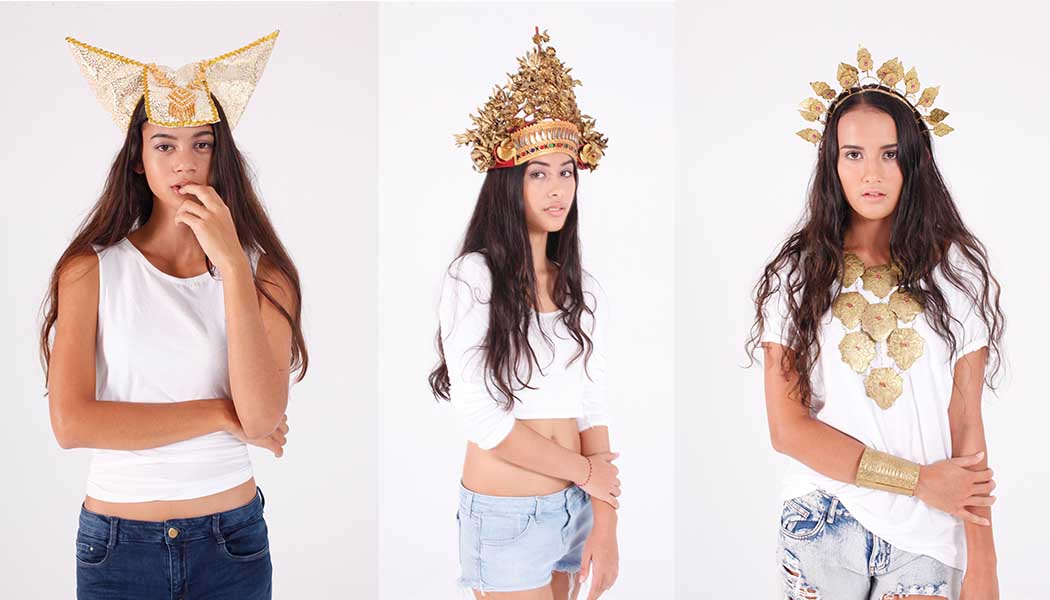 Guys, where were you born?

Eva: Vancouver, Canada but came back to Bali when I was five months old.

Joy: The Netherlands, grew up there ‘til I was 11 years old – then came to Bali.

Where are each of your parents from?

Indi: My dad is from Bali and mum from Melbourne, Australia.

Annabel: Mama is from Jogjakarta/Surabaya and papa from West Sussex in the UK.

Tristan: Dad is from Jakarta and mum is from Sydney, Australia.

Eva: My mum’s from Canada but she’s lived in Bali forever and my dad’s a Lombok/Balinese mix.

Franny: Mama is from Sorowako and papa is from Vancouver, Canada.

Joy: Mom is Surabayan and dad is Dutch – mom lives in the Netherlands and my dad in Bali.

Chiara: My mother is from Padang, Indonesian, and my father from Como, Italy. 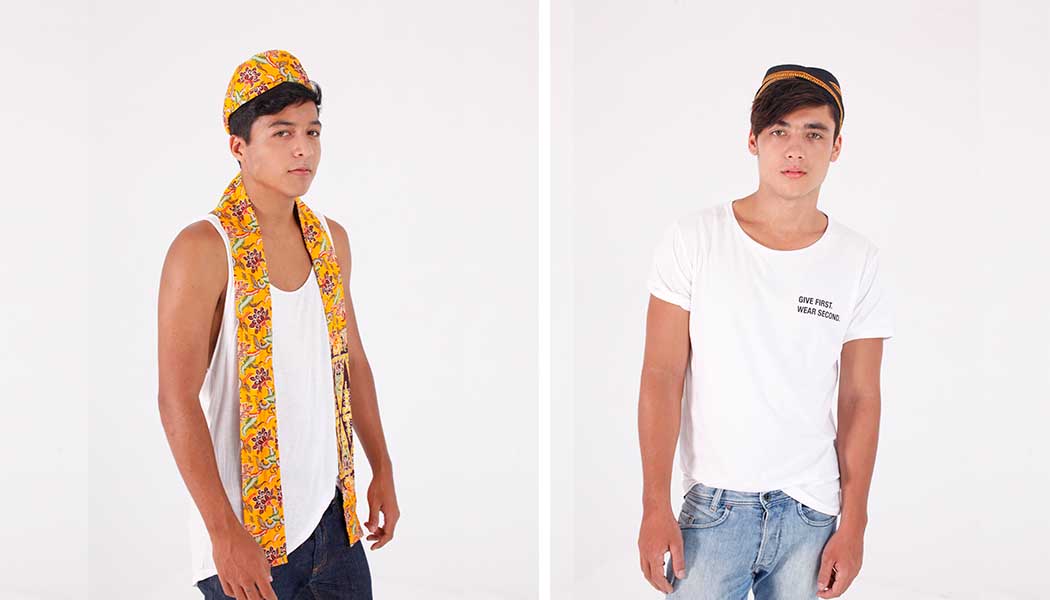 How did your parents meet?

Annabel: I think my parents met at the Four Seasons hotel when my mom was working as a waitress and my dad was a guest staying there.

Indi: They were neighbours in Bali. Dad was living with his brothers on top of our family restaurant in Sanur and mum had just moved into a little villa next door. They always tell me stories of how they would jump the fence and into each other’s rooms to see one another.

Chiara: My mom was a runway model based in Bali back in the early ’90s and one night my dad went with his friend to a fashion show where my mom was working. My dad would then go to all her shows and he brought her flowers and that’s how they started their romance.

Would you consider yourself predominantly Indonesian, or Western? With which demographic do you most identify?

Joy: Even though I’d really like to call myself Indonesian, I feel more Western because of the world I grew up in (the Netherlands). I suppose I still try to fit in here as much as I can.

Eva: I’m gado-gado to the core. I think outwardly I’m a lot more Western in my daily life but my home and my spirit is definitely Bali . . . this is where I’m happy.

Franny: I identify myself as both. I can never say just one because to Indonesians if I say I’m Indo, they will always reply with, “No! No way! You bulé . . . you blesteran (a mixed child in Indonesian)”. If I ever say I’m Western to Westerners, they say the same thing.

Tristan: Both; although I find myself steering towards Indo of late as I haven’t gone back to Australia for a while.

Indi: Such a hard question. I would always consider myself predominantly Aussie but since moving back here I love being considered Indonesian. It depends where I am I guess but I’ve definitely always been proud of having both cultures in my blood.

Your core social group – made up of mostly Indonesians, Westerners or mixed?

Joy: Many people I work with are Indonesians, most of my close friends are mixed and Westerners.

Eva: Most of my close friends and my boyfriend are all mixed like me but I have really good friends who are full Balinese and a few from all over the world. I think growing up in Bali is the real bond . . . not necessarily what our origins are.

Indi: Going to an international school I’m really exposed to so many different nationalities . . .

Which languages do you speak fluently?

Joy: I speak fluent Dutch and English, and some Bahasa.

Eva: When I was little I spoke Balinese and Indonesian, but when my mum and dad split up I started speaking this funny mix of Indo/English with my mum and we still do.

Annabel: An equal amount of both languages usually in one sentence. I could say things in four different languages . . .

Indi: A lot of the time we speak a mix of English and Indonesian in the same sentence but most of the time I speak English with my parents. I speak Indonesian to my maid and driver.

If you had children in the future, where would you imagine raising them?

Indi: I’d raise them the way I’ve been raised – probably Australia for their younger school years, and then as they get older, to Indonesia . . . or to wherever dad’s from.

Franny: I honestly don’t know. If Bali was still like this in five years’ time I would raise them in Bali. But I’m scared about how Bali will change and so I’m not sure.

Do you feel that being of mixed heritage has given you any advantage or disadvantage in growing up?

Joy: It helps in the modelling and acting world. Still, most locals look at you as a bulé.

Franny: One of the advantages is getting to travel to two different countries and having two lots of cousins from different corners of the world. A disadvantage is having to choose only one passport when I turn 18.

Indi: Sometimes I’m treated differently because I’m neither full-blood Australian or Indonesian but it just depends on how you take it.

Chiara: I lived in Bali my entire life, except for the three months after I graduated when I went to live in Milan. I went to learn Italian properly but had difficulty fitting in. My friends at school would always call me an “island child” because I didn’t know how to dress properly for winter and adapting to city life was harder than I thought.