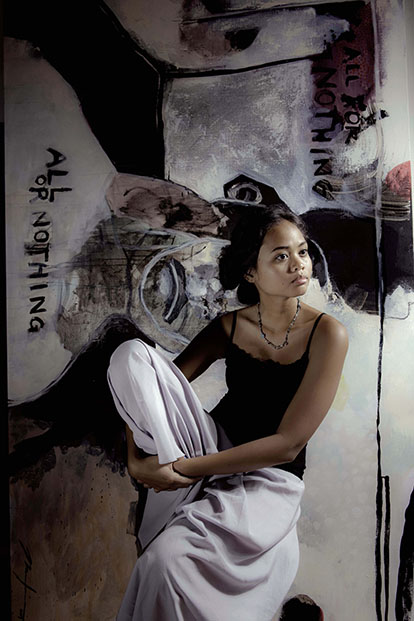 HI Natisa, what have you been up to since we last spoke?
I remember when we spoke last, it was a while ago. Maybe three years? Since then I’ve been doing a lot of travelling, working on my art, I got involved in various creative projects – kind of all over the place and seeing what’s out there. But mostly having fun working on expanding my art and just working on myself.
Tell us about the new studio . . .
The studio [Natisa Jones Studio] is something I’ve been working on since the better half of 2014 and made it public in March this year. I built my home studio in 2013, and since then have built a network of people who became interested in my work. As things got a little more serious I decided to move it to a more accessible/public space. The home studio was getting too cramped, as I started getting into bigger mediums.

Some of your work gets us to thinking Francis Bacon meets Ralph Steadman? And throw in some Picasso and a bit of Gauguin for good measure . . .
I didn’t really get into Francis Bacon until after my studies in art school. But I’ve been a fan of Ralph Steadman and Hunter S. Thompson since I was a teenager. My work mostly revolves around the human condition and the process of being human as a parallel concept to the creative process. I explore the less favourable parts of being human as much as the wonderful parts . . . mostly I’d rather talk about the less favourable parts because the wonderful parts don’t need dissecting.

You’ve been at this a long time now . . .
Yeah, I grew up in a creative family. I was always encouraged to be to free to express myself at home as a kid and it just became second nature. It [creating] just became my way of understanding/processing myself and the world around me. The process stays the same, but I guess the material just got heavier.

There’s a mix of things you reference in your work, but your style is developing? Do you ever foresee a time when you will just stick with one way to draw and paint?
I don’t really think about “style”. I don’t really look at my work and see what is going right and wrong according to how people will receive it or perceive it – aesthetically or otherwise. I just kind of do what feels right and if I feel satisfied doing it. I try to express as honestly and genuinely as I can.

How do you work – do you have a fixed time . . . night or day, when you paint?
I used to work whenever. Since I got the studio I give myself office hours. Nine to five. Since I’ve been involved in other projects on top of my artwork it’s easier to organise myself. Making art is making work and it’s easier for me to stay in check if I give myself at least certain boundaries. Sometimes I cheat but mostly I think I am pretty disciplined.

How much of your time is spent explaining what you do – marketing yourself, getting the word out . . .
In terms of creating versus all the other stuff about 50/50. Keeping it flexible is always good. Finding a good balance between being generous to the craft and having one foot on the ground in terms of all the other stuff.

What was the last great painting you saw that blew you away?
I went to Art Basel Hong Kong last month and there were loads of great works from senior to upcoming artists. But it was too hectic to be taking in one specific work fully. In Amsterdam this past Christmas I got to see the complete collection of Marlene Dumas in the flesh for the first time. I have been a fan of her work for a little bit now but only got around to see it then. The Kiss and Magdalena (Manet’s Queen/Queen of Spades are two works from the collection that really stuck with me.