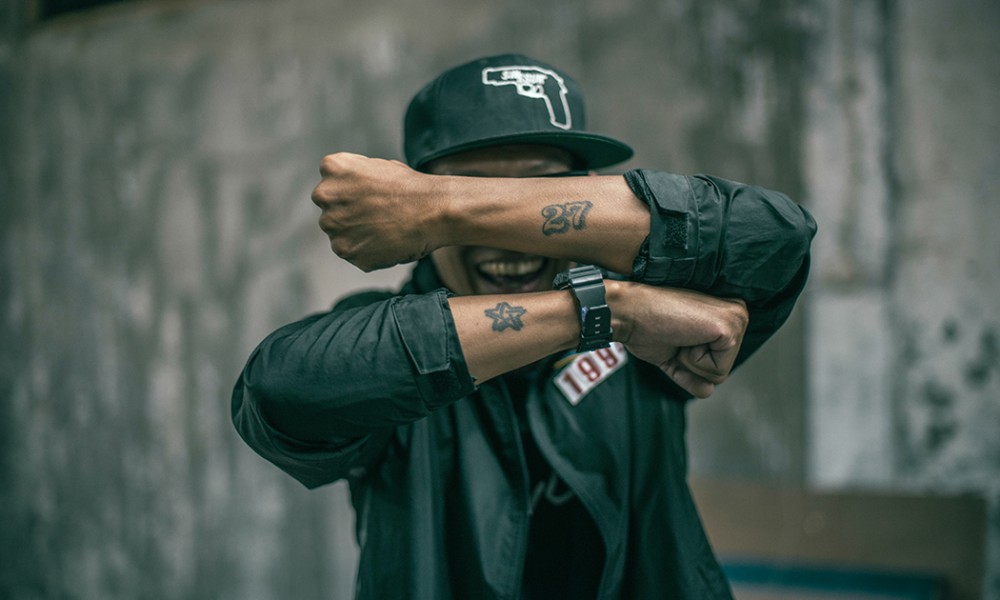 Rowan Kane meets a group of artists in Bali and finds solace in the avant garde. Photos: Mark Carolan.

CHEAP rent and a low cost of living are the lifeblood of any art scene. An inspiring environment, an open society, and easy access to patrons with disposable income help too. Bali has all this in spades, so it’s unsurprising there’s been an uptick in avant garde art on the island recently, with one group emerging as a tour de force.

Craig Woodruff and Bianca Timmerman, aka YOKII and Bunny Bone, live together in their Seminyak studio, which, if you take away the tropical heat and open-air courtyard, could easily be mistaken for a converted loft in Brooklyn or Berlin. 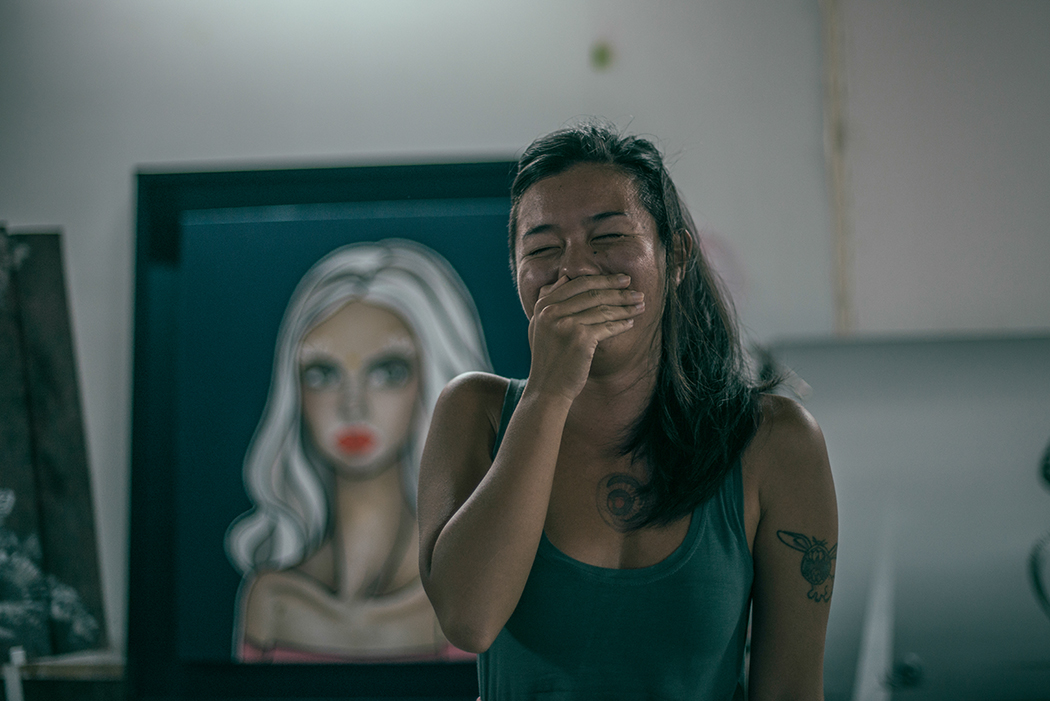 It’s spacious, messy and simple; chairs are few and far between and there is a definite post-industrial feel, a rarity in Bali. In one corner there’s a pool table hastily covered in cushions to protect it from a leak in the roof.

Neither the Sydney-bred YOKII, nor Jakarta-raised Bunny, would tell you this, but they are smack dab in the middle of a burgeoning contemporary art scene centred around Nyaman Gallery in Jl. Raya Basangkasa. The work of Frenchwoman Melvine Amar, the gallery is the culmination of several businesses and is very much her passion project.

“The gallery is not commercial,” says Melvine. “I want to allow artists to follow their inspiration. For me, this is about pleasure, how to appreciate and reciprocate the fun and pleasure that I get from their art.”

Before arriving in Bali, Melvine spent time managing exhibitions in France and New York, but she was never a fan of the pomp and stuffiness that accompanies the galleries and shows of the higher art circles. So when she opened Nyaman Gallery, she brought with it a clear sense of humility, a trait she shares with her artists. 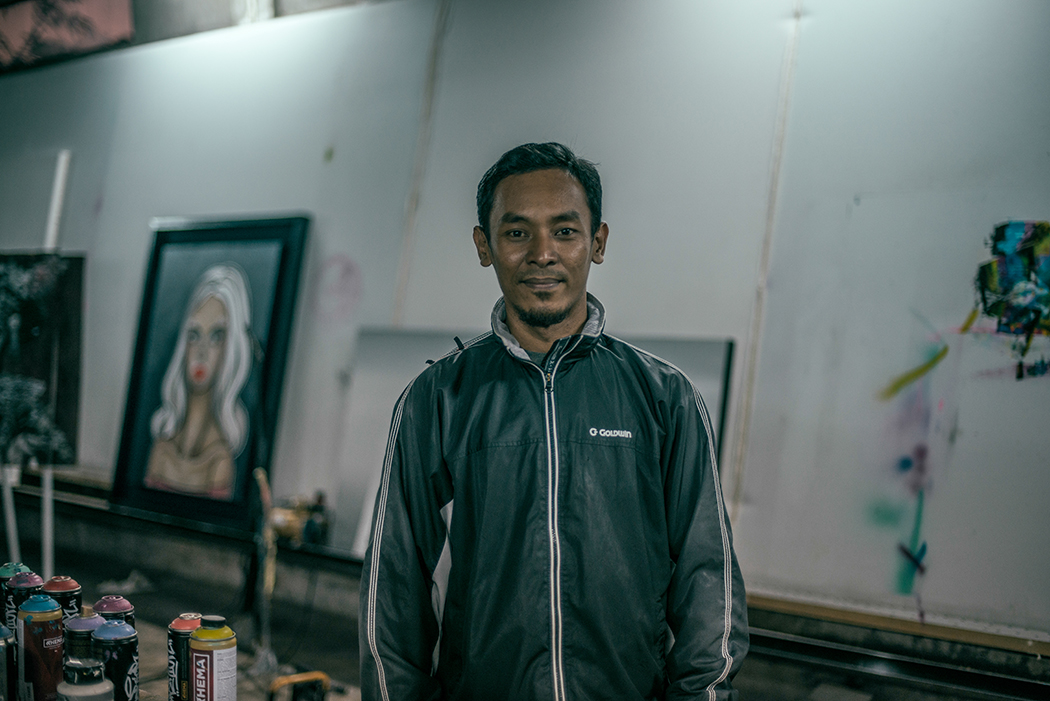 One of those is L. Fauzi who hails from Probolingo, East Java, where he runs a grocery store. Having never studied art in any formal capacity, Fauzi is an autodidact with clear Ludditic tendencies. He has a basic cell phone and doesn’t use a computer, let alone engage the internet or social media. He’s tried but it’s “too complicated”.

Fauzi’s art, to an amateur eye, looks something between MC Escher and Salvador Dali and is inspired by mundane objects (an Aqua box is central to one of his recent pieces), which enter the artist’s substantial imagination at random – for instance mid-shower – and, two to three weeks later, appear as part of an elaborate and detailed work. Like YOKII and Bunny Bone, Fauzi’s art is decidedly his and you can pick it out as you meander through Nyaman.

If the works of Fauzi are easily identified by their intricate imagination, YOKII’s can be defined by its process. The Australian started screen-printing in his uncle’s workshop as a kid and as an adult moved from creating t-shirts for bands, schools, and businesses to working in a gallery. Then came his biggest inspiration: the death of his best friend. Through that tragedy came the determination “to not take time for granted … I’ve been working for myself ever since and doing art everyday.” Along the way, Yokii has mastered and takes pride in each step of his art; from Photoshopping the plastic screens right down to mixing his own paint. 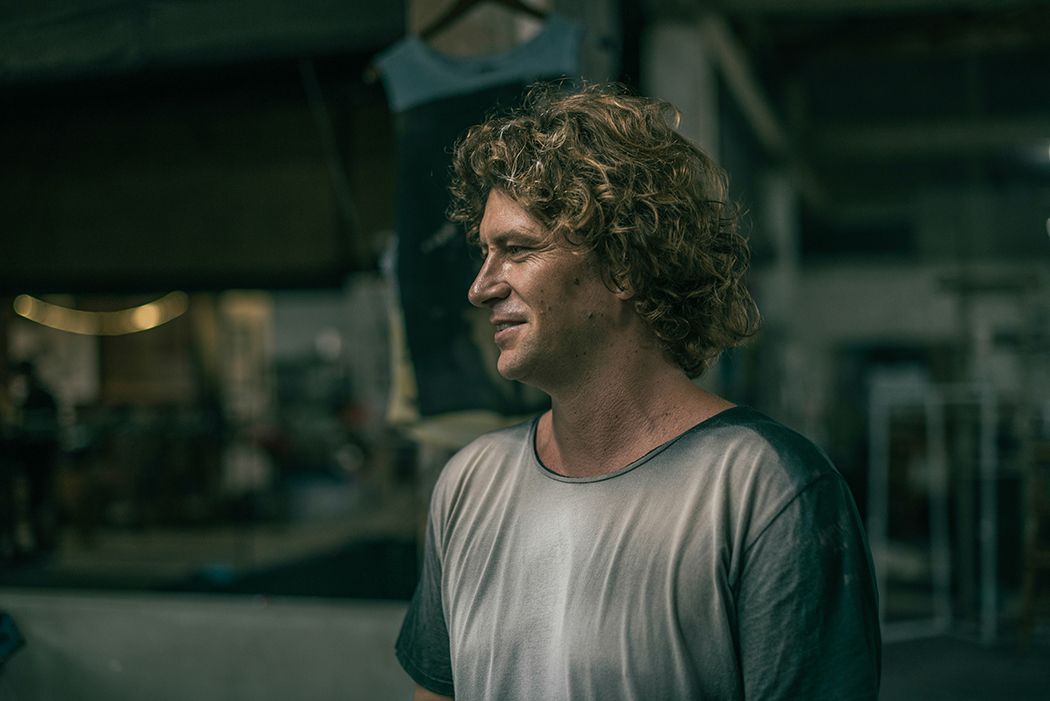 “I love to share the process with people to make them really appreciate what goes into these works,” he says. “It’s a difficult thing to get across but it’s the most important part to me.” While he may not be able to communicate it verbally to those who buy his works, YOKII’s art throws his process and its levels at you, forcing you to absorb the steps he has taken in its creation.

Bunny’s work is uncomplicated and the most clearly stylized of the bunch. As Bianca, she works as a gallery assistant at Nyaman but there is a clear understanding between her and Melvine that when the muse hits, it’s back to the gallery. Bunny studied fashion in Jakarta before moving to Bali and that background comes out, if somewhat obliquely, in her work, which features the kind of female faces you would find in Vogue or Marie Claire, contrasted against a black background.

Three years ago, YOKII, Bunny, and two of her girlfriends began hosting what they call Black Market parties in his bar called Black Sheep that sat behind his old shop. Their friends and fellow artists came to sell their own creations, share their talents and just bask in a creative and free space. “It was a time to cut loose for me,” YOKII said, “Where I could have some Bintangs and create whatever I felt. I would always live paint or print t-shirts.” 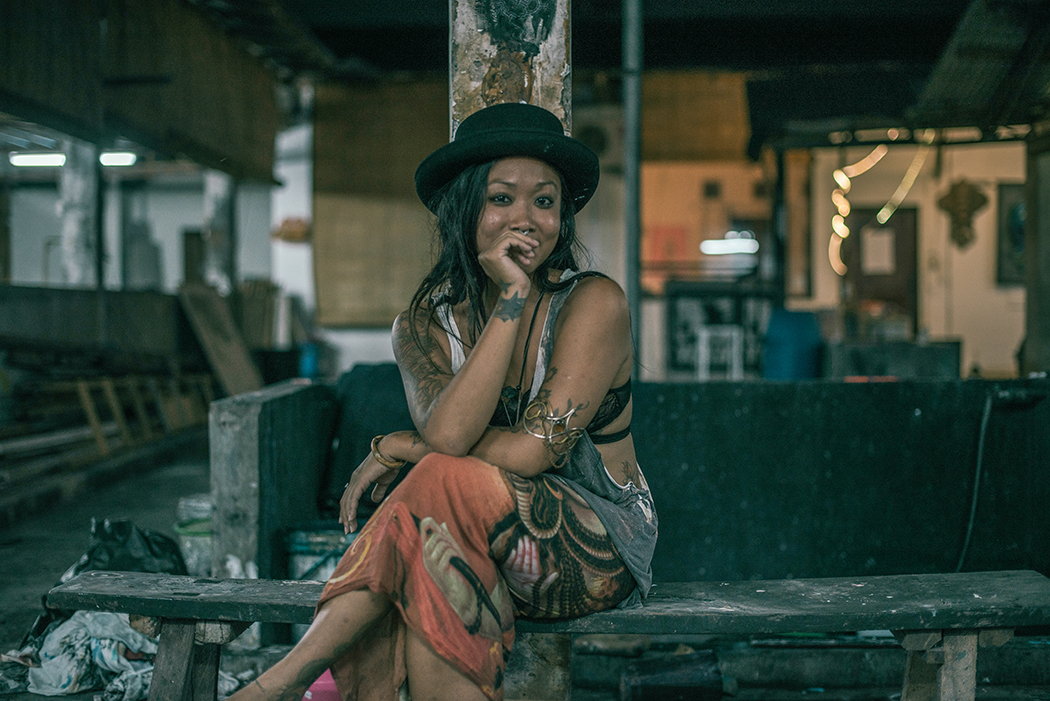 The Black Market is alive and well, a fact Bunny lays down to its (and their) driving philosophy. “There are no exact rules on how we do it, it’s all pure fun and freedom. We do it whenever and wherever we feel it. We fund it ourselves, anyone gets a chance to do things or exhibit their work, you don’t have to be cool or a good artist.” This “colorful circus,” as she calls it, has attracted the kind of hip diversity you would expect from a thriving art scene; running the gamut from homeless Javanese artists to Czech punk-hairdressers to drunken tarot card readers. Balinese celebrities like JRX and Robi Navicula have lent their musical talents, as well.

Quint, a street artist who works with stencils along the lines of Banksy, Yonaton Rumion, a sketch artist, and Tarita Aurora, a tattoo artist, all fell into the Black Market orbit along the way. Tarita, who describes her work as “intuitive and psychedelic”, says it took far too long for her friend, Bianca/Bunny, to convince her to move from Jakarta. Her verdict is clear. “It’s been the best decision I ever made.”

Around the same time Black Market got off the ground, YOKII met Melvine when she saw some of his art in his shop window and commissioned him to make a few pieces for her. Their relationship grew from there and when Melvine began to the toss around the idea for opening a gallery, YOKII was the first artist she approached.

Bali has clearly made its impression on YOKII. Many of his prints are centered around Balinese faces and in describing the island he says, “Dreams are alive here. Endless inspiration and possibilities.” Yet beyond the imagery and individual inspiration is a deeper connection between Bali and its artists. YOKII, Bunny, and L. Fauzi and the others are not Balinese but each owns traits central to the spirit of classical Balinese art. 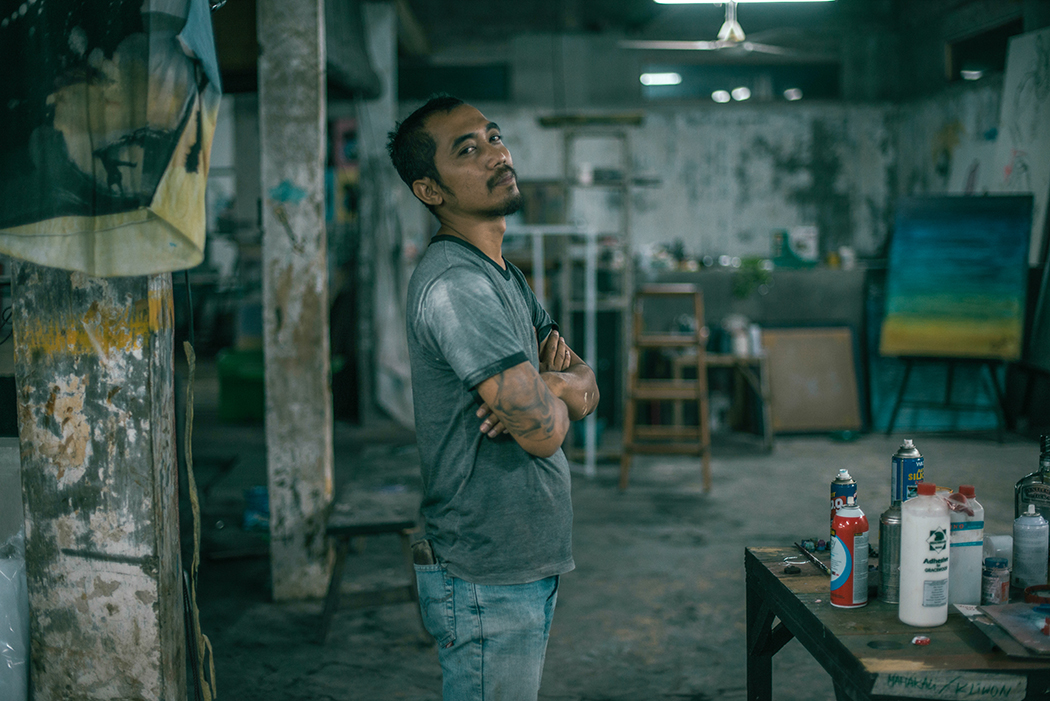 Unlike YOKII, Bunny & co., Yoka Sara is very much Balinese and from July to September on Sanur beach he produced a series of performance art “moments”, each of which was directed by an individual scenographer surrounding the overall theme of water. He called the project SPRITES and if this was held anywhere else in the world, it would certainly have been labeled as ‘l’art pour l’art’ and summarily dismissed. Art for the sake of art, with no real message or purpose, has been a major critique of the modern movements.

But in Bali, ‘l’art pour l’art’ becomes ‘l’art pour l’artiste.’ Balinese art at its core is a religious experience, a devotion of time, energy, and beauty to the Gods. In much the same way that Balinese offerings are crafted for the moment of sacred giving and are then profane, it is not the final product in Balinese art that is important but the process. This came naturally to Yoka Sara. The venue on Sanur Beach grew and changed with each moment until its culmination in early-September. Then after three months of work, it disappeared. It was not the product that was important but the process, the creation of beauty and the work of the artist.