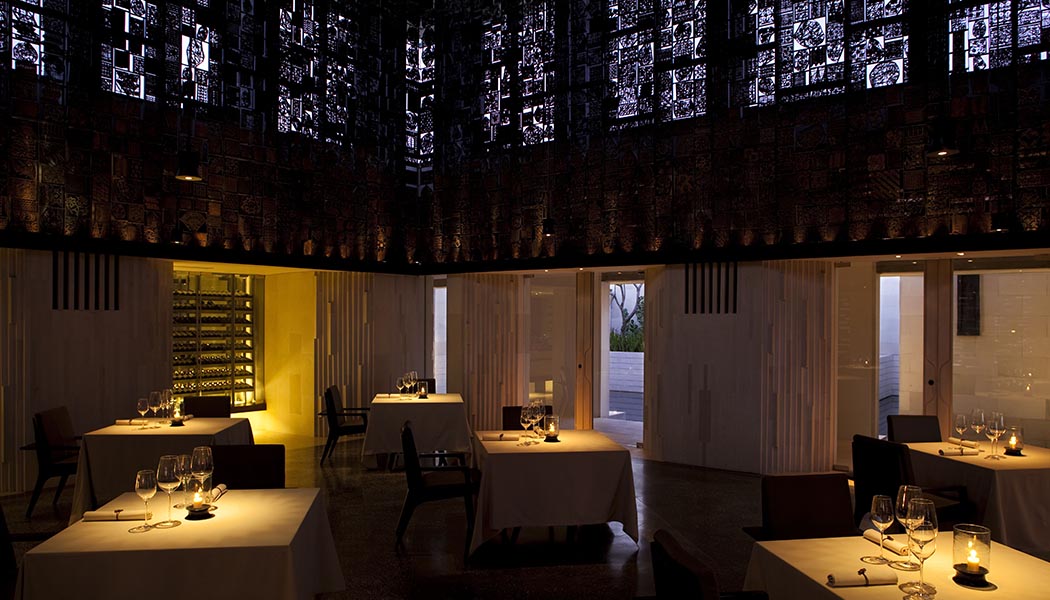 It’s impossible to arrive at Alila Villas Uluwatu without catching your breath. Not because it’s much of a climb to the edge of the cliff on which it sits, but because of the view that leads from it, to what could easily be the edge of the world. It’s nothing less than astounding, and possibly the biggest reason why this design-driven resort is one of the sexiest properties in Bali, and as such graces countless magazine spreads. 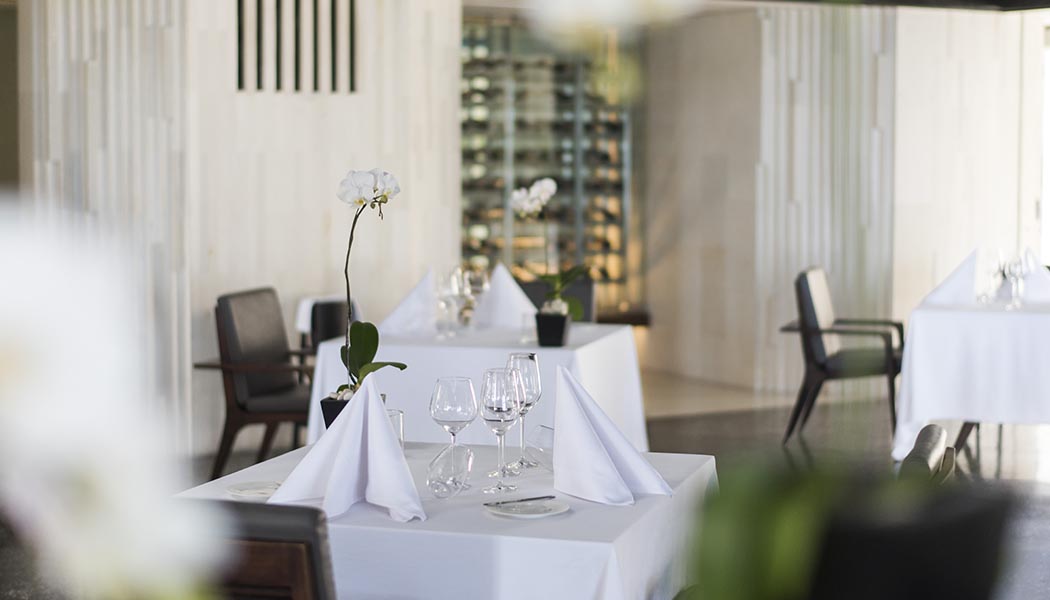 Looking at the view isn’t my reason for visiting though. Rather I am about to be taken on what promises to be a sensory culinary journey by their Catalan chef, Marc Lores Panades. Seven months into the job, he has created a concept restaurant within the main restaurant, Cire, which takes diners on a journey that encompasses story telling, blindfolds, aromatherapy and even sound. Dive in, don’t wait, it promises to be an interesting dining experience. 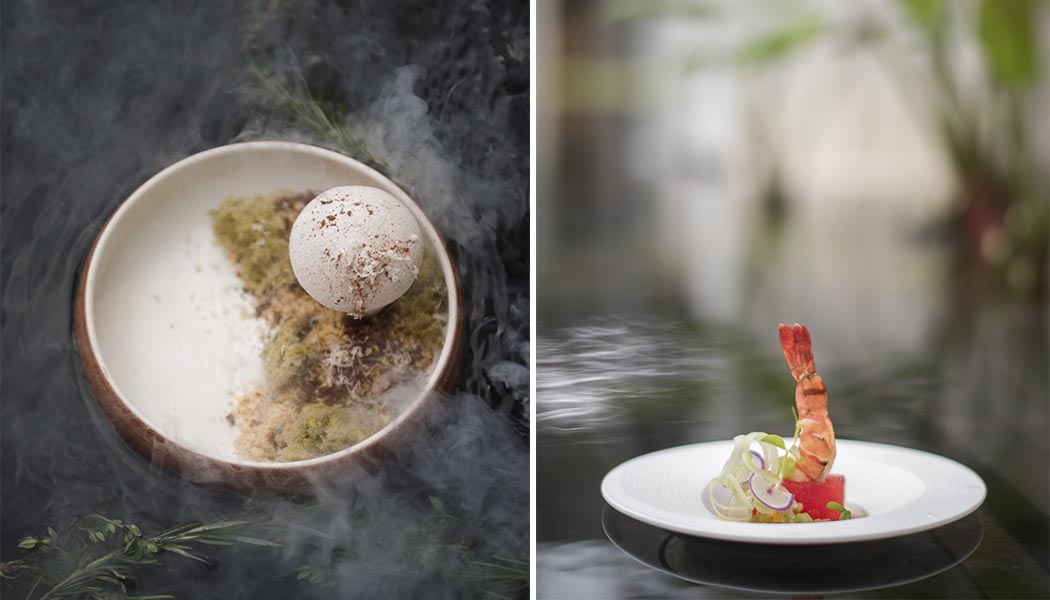 Firstly let me say that this isn’t an undertaking you would want to rush, in fact you can’t. Ten courses play out as chapters in a story where service and food function together create the Five Senses dinner.

Encased in an air-conditioned dining area adorned with a series of old batik stamps around the high ceiling, the waitress begins with a story about St George and the dragon. The course is a cold gazpacho-inspired soup served in a dragon fruit with crunchy croutons on top. It is served with a beetroot mocktail complete with a beet-shaped ice cube. The dinner is designed to pair with fruit and vegetable drinks as the chef explains that in the absence of quality Balinese wine, he opted to match it with juices. Thankfully they will happily serve wine for those who prefer it. That would be us. 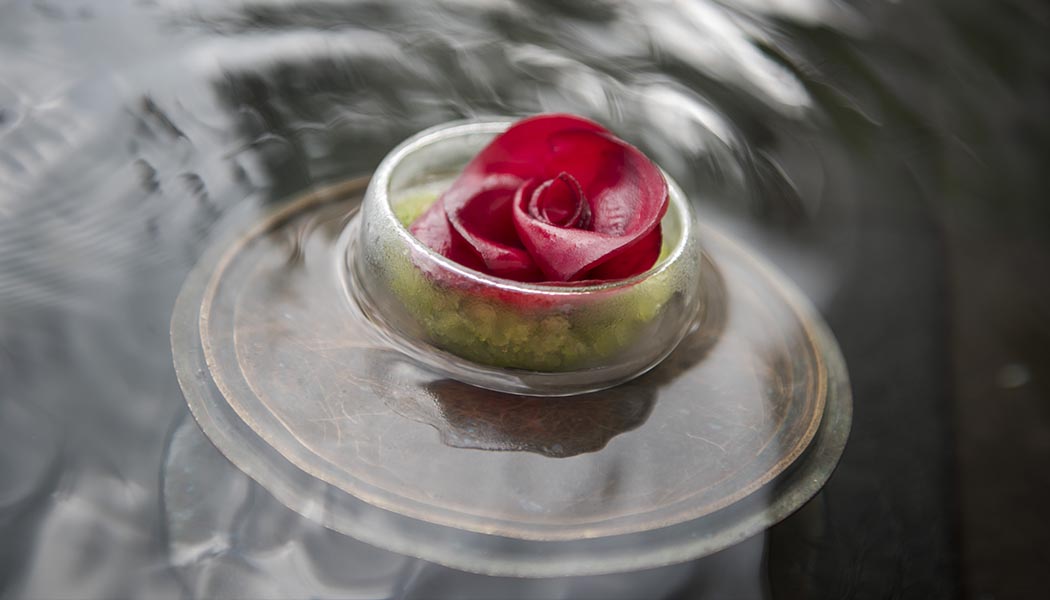 Alila as a group is committed to working with the local community and 99% of the menu is inspired by local produce. Olive oil and beef are the exceptions, and the wine of course, a lovely New Zealand pinot noir. The menu gives little hint of what is to come and the chef refuses to be drawn on the type of cuisine we can expect. Indeed it is a fusion of cooking techniques, local products, international inspiration and lots of local spices.

“When I was working overseas, the ingredients that I can find here cheaply were considered exotic and were very expensive. The kitchen staff have learned to appreciate their local products and we experiment a lot with dishes that combine my experience and theirs,” explains the chef. 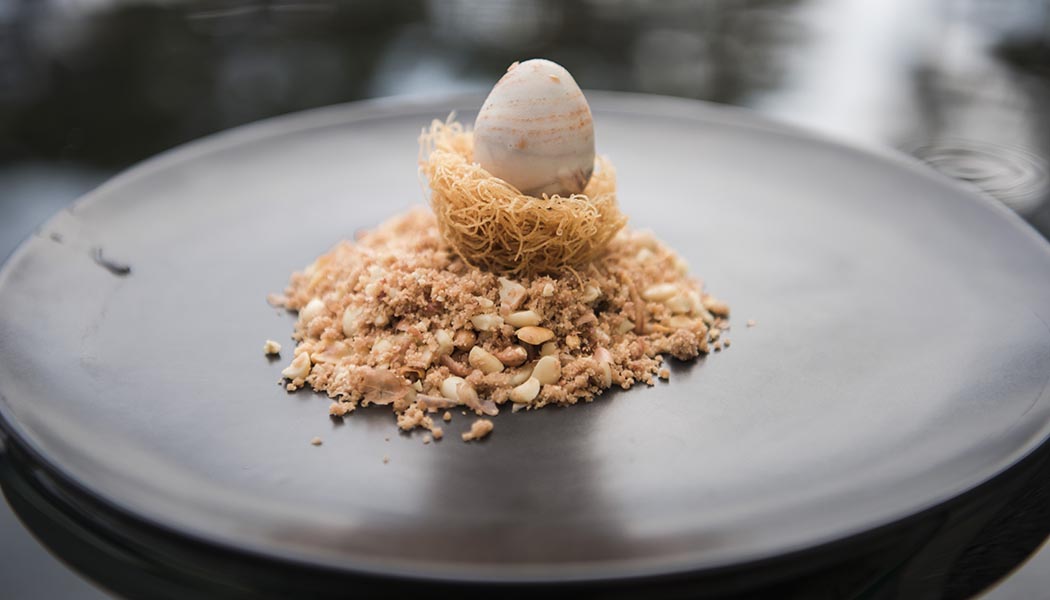 The dishes will change according to what’s available, guest feedback and new ideas.

“Some people will love certain dishes, others not, so we continue to improve the menu, build on what we learn and try new things,” he continues.

The first dishes were largely vegetarian. One dish billed as beef carpaccio produced a twinkle in the eye of our waitress as she placed it on our table. “Is it or is it not?” she asks. Definitely not but it was a stand out on the night. Grilled slivers of watermelon dressed with pine nuts and parmesan wafers. It was fresh and delicious and the texture was fantastic. Much of what we ate early in the dinner is also cold, including the “beef” carpaccio and a startling carrot dish that combined carrots three ways in a pronounced play on sweet and sour. 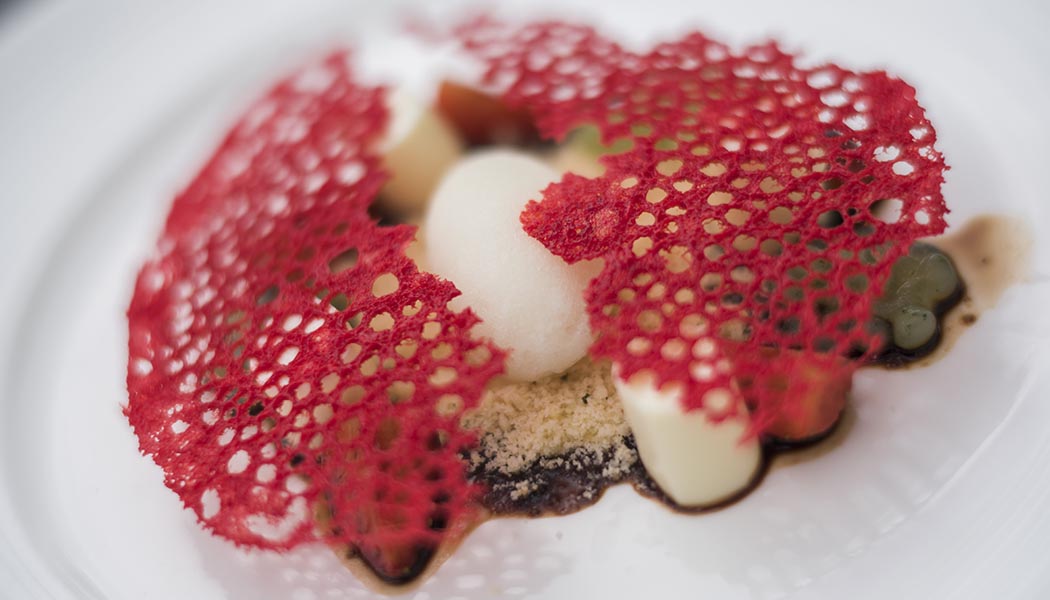 The chef believes that every dish should include something sour or bitter as balance so there are pickles and foams that play off sweeter flavours. It is very complex and definitely surprising, chances are you have never imagined, let alone eaten, many dishes like these.

There are playful moments as well as serious ones as we travel through the sensory journey. See, taste, hear, feel and smell are all addressed with two dishes each. One surprising moment included the waitress arriving with a blindfold and a shell. After donning the blindfold the guest is asked to hold the shell to his or her ear, producing the sound of the sea while a scent of the ocean is produced from the dish, which is revealed as a beautifully cooked charred rock lobster served on a bed of shells with a rich side of burratta and corn. The lobster was stunning, the side was rich and there’s a charming element of drama in the service of the dish. 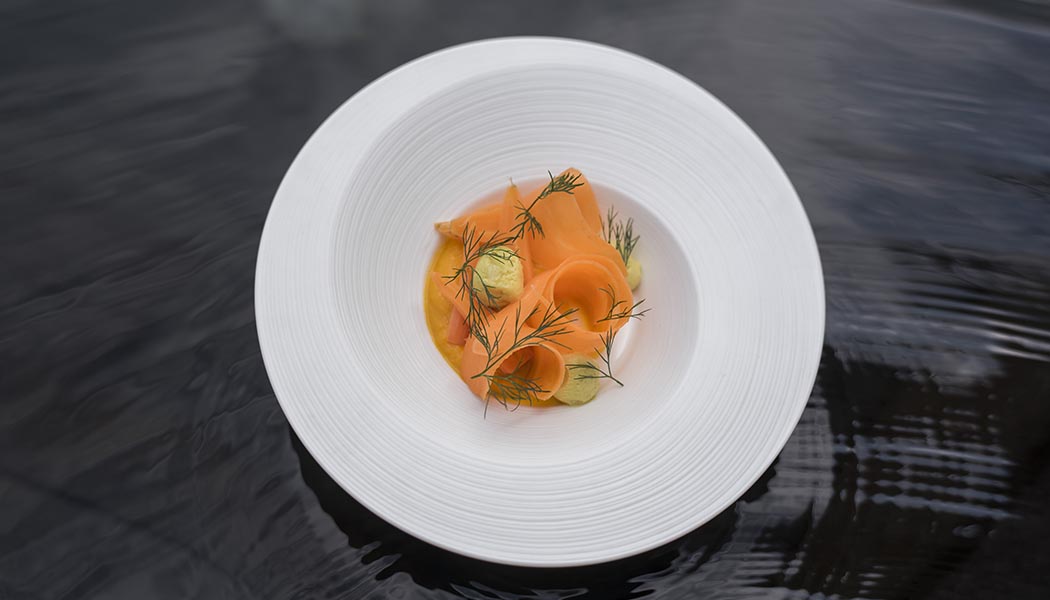 Another involved a burner being set up with fresh herbs infusing black tea which was then poured over a bowl of potato balls, somewhere between gnocchi and bakso, the local soup sold on the roadside, the smokey dish was a little out there but this is a journey full of twists and turns.

Local spices and Balinese dishes play a major role in the menu of plates. Those new to Bali will be introduced to tastes, dishes and flavours that may be new to them. Those who are familiar with local food will find many dishes blur the elements between street food and modern gastronomy but retain their original profile. 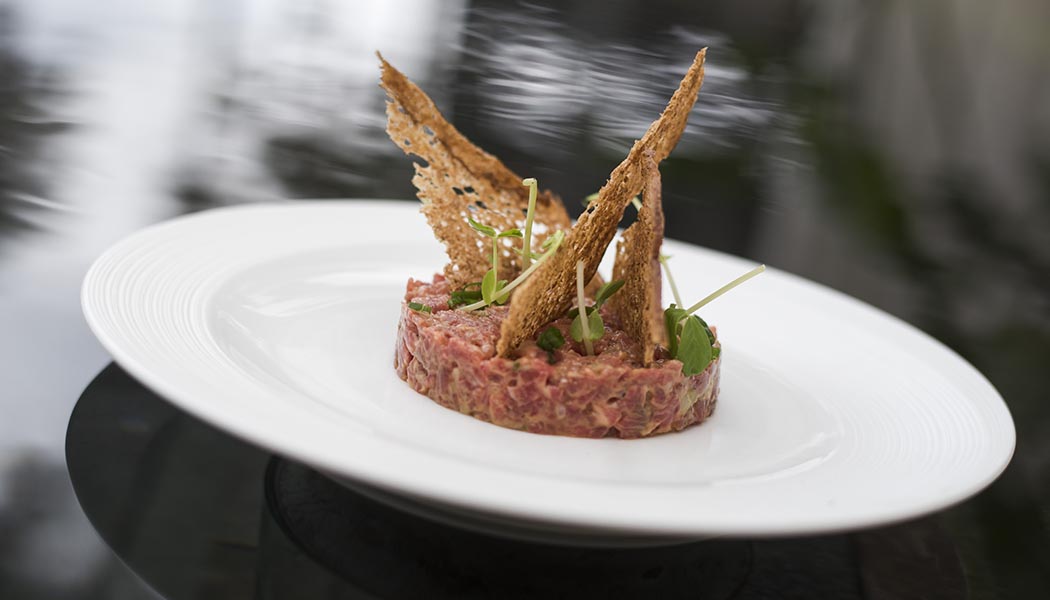 Sate lilit is one such dish. The fresh white fish is raw and marinated in ginger, galangal and lemongrass and topped with an ice cream inspired by a Balinese sambal. Deep fried shallots provide a textural element and a side of fresh lemongrass sits alongside. The fish is meltingly tender, the spices are up front but not overpowering, it’s a play on all the elements.

The cold courses melt into more substantial dishes and two breads appear during the meal, both incredibly light. One with sea salt and candlenut, a local nut used for thickening, the lightness testament to a skilled baker. The second, served with the lobster, is a tiny black roll created with squid ink and cheese. It sounds out there, it is out there, but it was delicious. 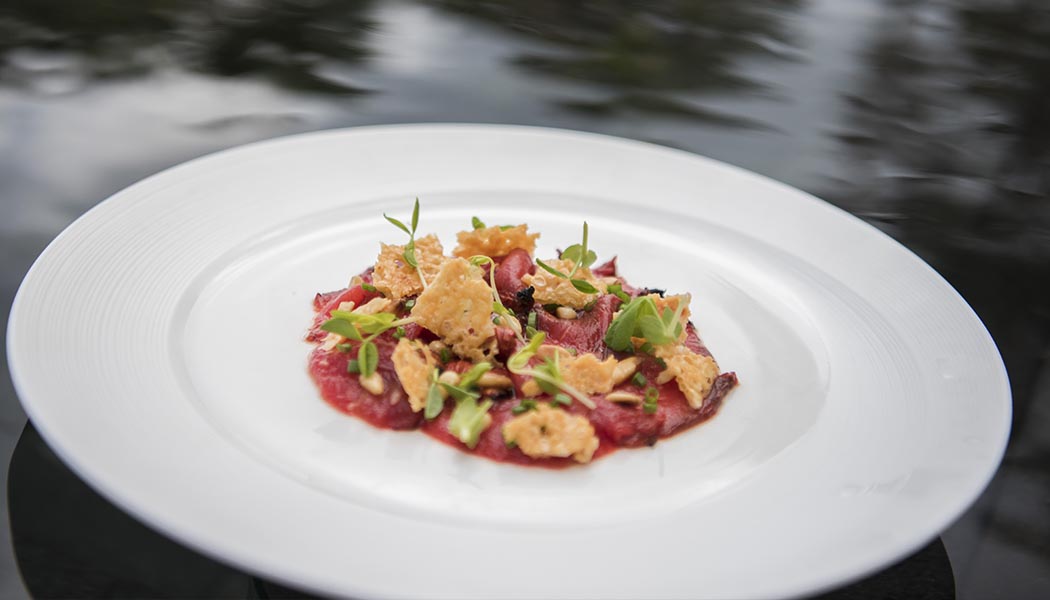 The final dish is a beef dish and the spice temperature is turned down for this one –  a small but beautifully tender piece of slow-cooked beef with a traditional jus served with fresh garden vegetables.

It’s a lengthy process eating 10 courses and our dinner lasted almost three hours. Diners who start to feel the chill of the room are offered pashminas and the two waitresses servicing the 10 tables clearly enjoy the theatrics of the meal. The chef arrives from time to time to discuss the courses and the ingredients. It’s a dinner that’s designed to involve the guests as well as the staff. 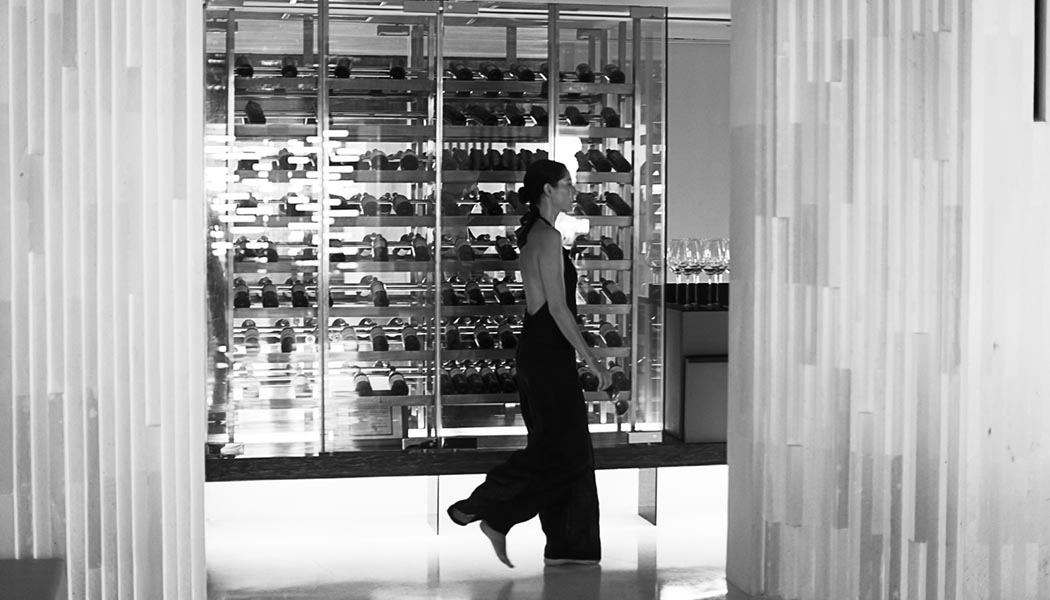 Two desserts arrive and we were eliminating menu items as they arrived. The Mutiara (pearl) was on the dessert list. A large glass filled with chunks of white chocolate meringue (I’m still guessing), strips of sea plants, with a tart yoghurt sauce that reveals a pearl-like ball of chocolate. The Uluwatu mushroom was the finale and I had guessed it; chocolate meringue shaped as a mushroom sits on a ball of hazelnut ice cream on a bed of nuts resembling earth. 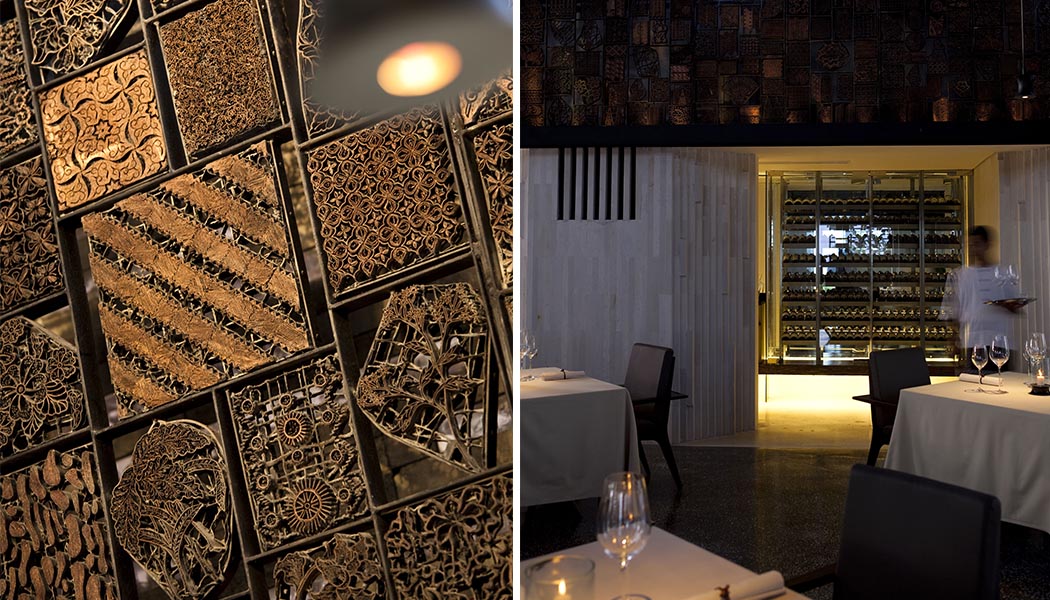 This isn’t a dinner you would eat regularly, it’s fair to say it is unlike any other meal I’ve eaten, and as the chef suggested there were elements we loved and others not so much. Overall though, it’s an adventure that takes you places you may not have been. Modern in its conception, traditional in much of its flavours, it’s a surprising degustation from start to finish and well worth the commitment.