The Yak At 50: ‘It All Started With A Cocktail’ 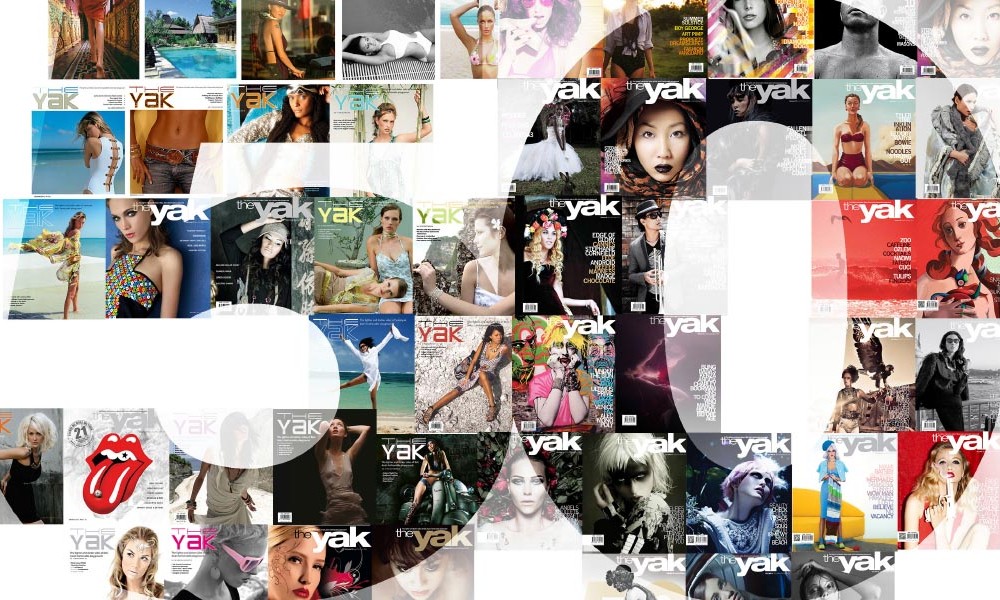 As The Yak publishes its 50th print edition Stephanie Mee looks back on a 12-year history.

If you’re even remotely familiar with this sassy little publication, it probably shouldn’t surprise you that it rose out of the mists of Bloody Mary-fueled banter.

The reason to reminisce on the origins of The Yak is because this is the 50th issue, and just one of many milestones that the magazine has hit over the past few years. In 2013 the mag turned 10 years old. In 2014 it held the 10th annual Yak Awards. In 2015 came the first ever Yak Magazine Golf Invitational. And so far this year The Yak website has been revamped and there are a slew of exciting projects on the horizon. 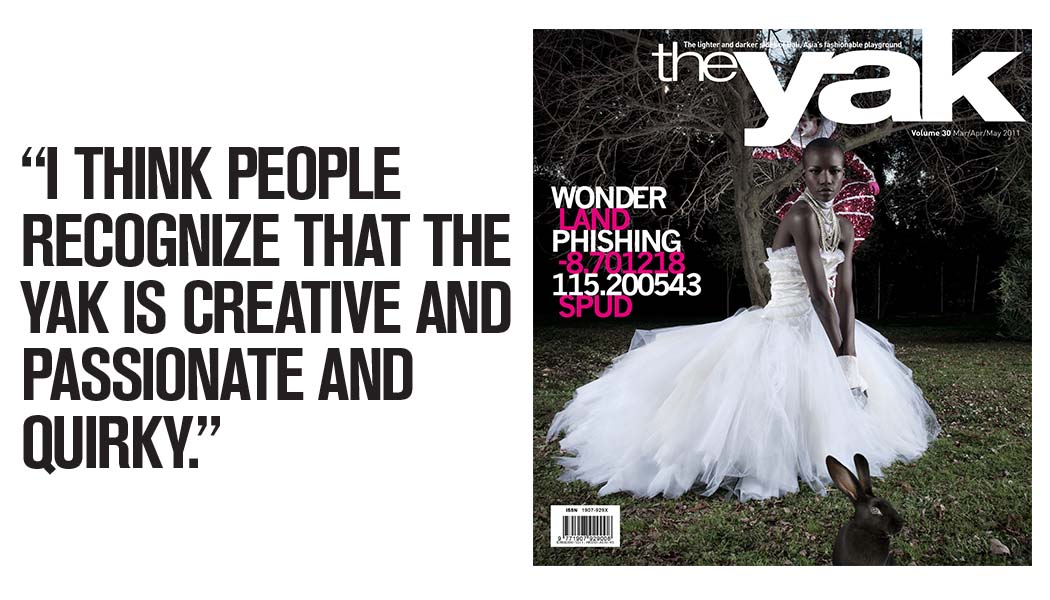 With so much already under their belt and much to look forward to, you might wonder: why bother looking backwards? Well, to quote Bob Marley, the prolific poet and luminary musician who also rose to stardom from next to nothing, “In this bright future, you can’t forget your past.”

In recalling the moment in 2003 that ignited the spark that would start it all, The Yak magazine co-founder Sophie Digby says, “Mish (Michelle Lamb) and I were getting massages next to the pool and staring down at these bowls of daisies through the holes in the massage tables. Boring right?

“So we ordered Bloody Marys and bloody long straws. It was all very un-Zen of us.

“We had always wanted to do a magazine together, so we just started coming up with ideas, usually fuelled by alcohol. And we just bounced off each other and then wrote a couple of notes on the hotel paper. And I kept these notes…”

At that time there were a few other Bali mags floating around, but most of them were geared towards the hotel and tourism industry. In addition, Seminyak was not yet the heaving hotspot that it is today. Ku De Ta had just recently opened its doors and there were only a smattering of luxury hotels and villas in the area. 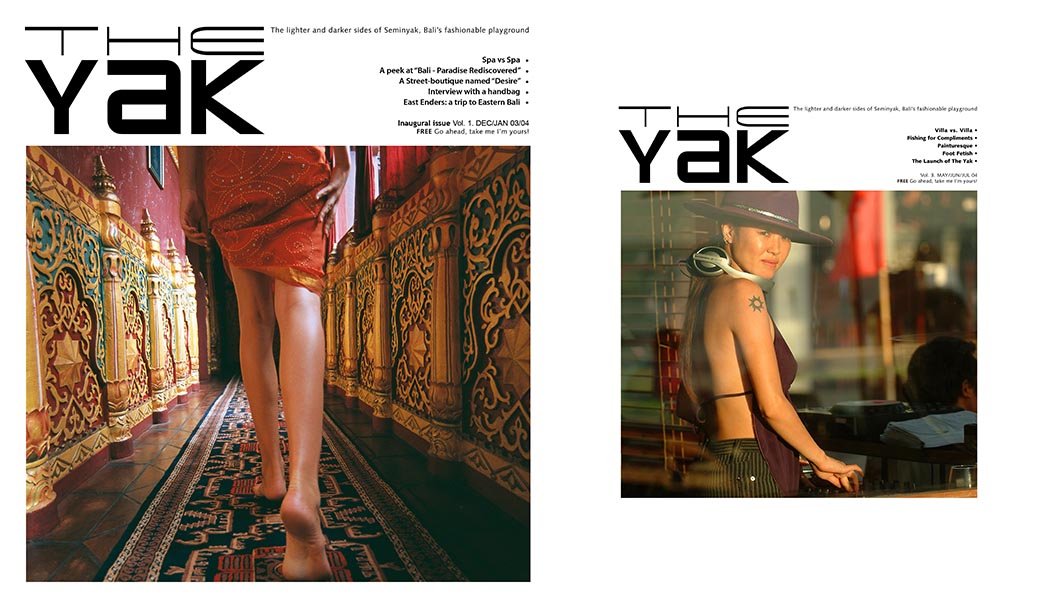 Yet Sophie and Michelle saw a real gap in the market for a luxury lifestyle magazine that would represent Seminyak, their tiny (at that time) piece of the island, and the people and businesses there that they knew and loved.

Sophie says: “At one point I picked up the phone and called Mish and said, ‘It’s on. We’re doing it.’ We went out to market with very little backing.”
“I think the most amazing thing though is that we called about 48 potential clients I had worked with through Bali Plus, and 24 of them came on board. That was on November 7th, and the first mag came out on the 27th of December. So in seven weeks the first magazine landed in Seminyak. Impressive, we thought.”

The first magazine topped out at just 48 pages, but it was something truly unique on the Bali scene. Not only were they covering a niche that no one had covered before, but they also opted for glossy paper and the somewhat off-the-wall size that you still see today. 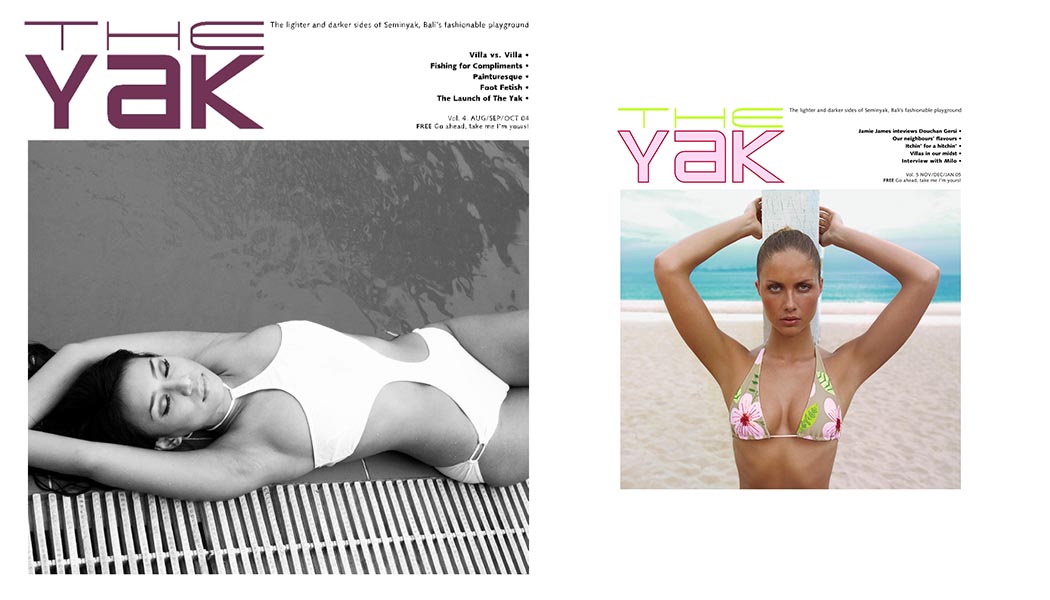 Sophie says: “At that time we didn’t realise there were norms. You know, many people say that you should complete business studies or understand magazines. We didn’t realise that most people start a magazine with half a million dollars or more. We just did it very much from the heart, which we thought was the right way to do it.”

John Halpin, General Manager of The Oberoi, Bali, says: “I first encountered The Yak on Sophie’s kitchen table as she and Michelle cooked up the idea to do a magazine for ‘our’ Bali. And when it came out I loved it. Prior to that every magazine produced locally was full of spelling errors, grammar mistakes and dull, witty-less content, except for Diana Darling’s Latitudes magazine which is sadly no longer in print.”

Susanna Perini of BIASA says: “It had a super glossy presence for us still-hippies at that time. Glossy and cool. You could see that someone with a sharp fun side, with one foot in the ’80s and the other one forward in the new millennium, had the hitch to come up with a Bali-based magazine that had the potential to mingle at distinguished international lounges around the planet.” 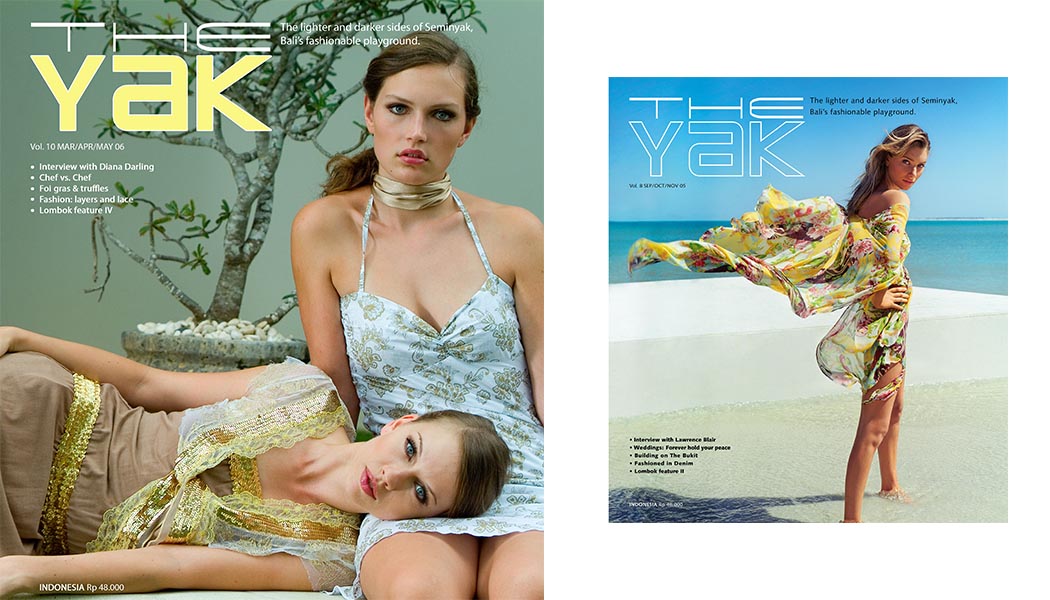 Says Sophie: “The Yak gave the world a window so that people could see Bali and go, ‘Oh my God. Is that Bali? I didn’t realize that was Bali.’ Basically we were and still are one of the windows that reflects a certain type of Bali.”

However, despite the positive response, there were still many who thought the idea was crazy. Naysayers withstanding, Sophie and Michelle continued on with a great deal of support from businesses in the area including a few that were there with them from the beginning – Ku De Ta, The Legian and Elite Havens. Sophie says: “People really believed in us at a time when confidence in Bali was thin on the ground.

“Then in 2007 Michelle made the decision to move back to Melbourne, and at Michelle’s going-away party I met Nigel (Simmonds). It was like the universe was on my side.” Sophie was quick to invite Nigel on board as Editor-in-Chief.

“It wasn’t actually until Nigel came along that the magazine grew from a somewhat irreverent product into the magazine that it is today. Without a doubt, I think we started a seed and what Nigel did was fertilise it and encourage it.”

Nigel says: “Originally when I started, all the magazines were basically directed at hotels because there weren’t so many independent places at that time. But The Yak was capturing the attention of people who were independent. 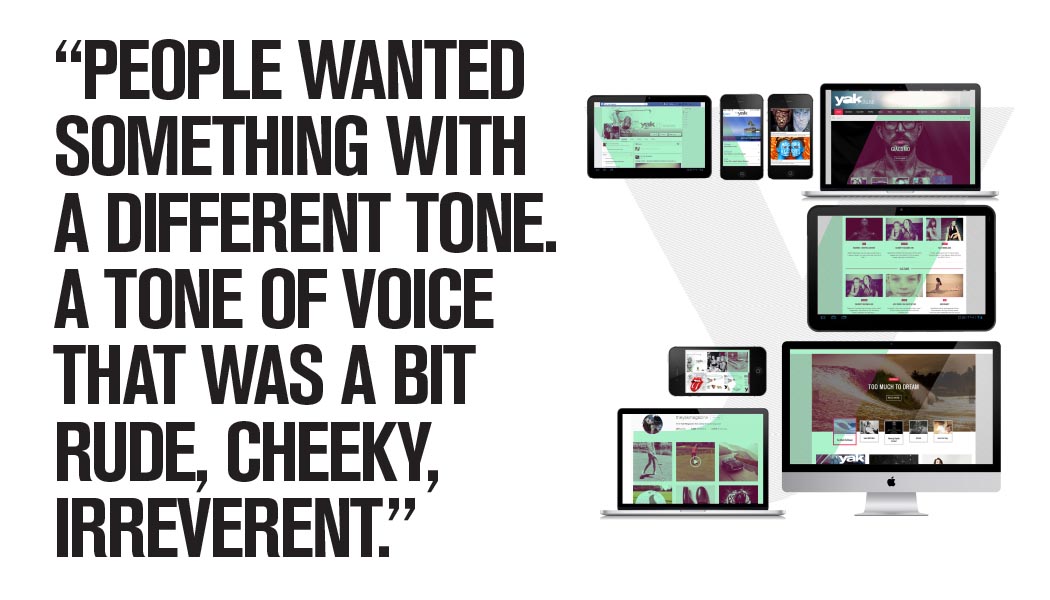 “Also, you started to see more people opening independent restaurants and fashion labels and whatnot, and they wanted an independent voice to reach independent people. So that was the idea. That was kind of how it got traction I think.”

Sophie adds: “People wanted something with a different tone. A tone of voice that was a bit rude, a bit cheeky, irreverent.”

After Nigel came on board, Stuart Sullivan also joined the team as Creative Director and the whole look of the magazine began to change. He brought an independent design element into the mix, revamping the masthead and interspersing different textures of paper throughout the mag.

And with an ever-increasing influx of creative types flocking to Bali’s shores, the writing and photography progressed even further, and in return The Yak helped others progress in their own careers. 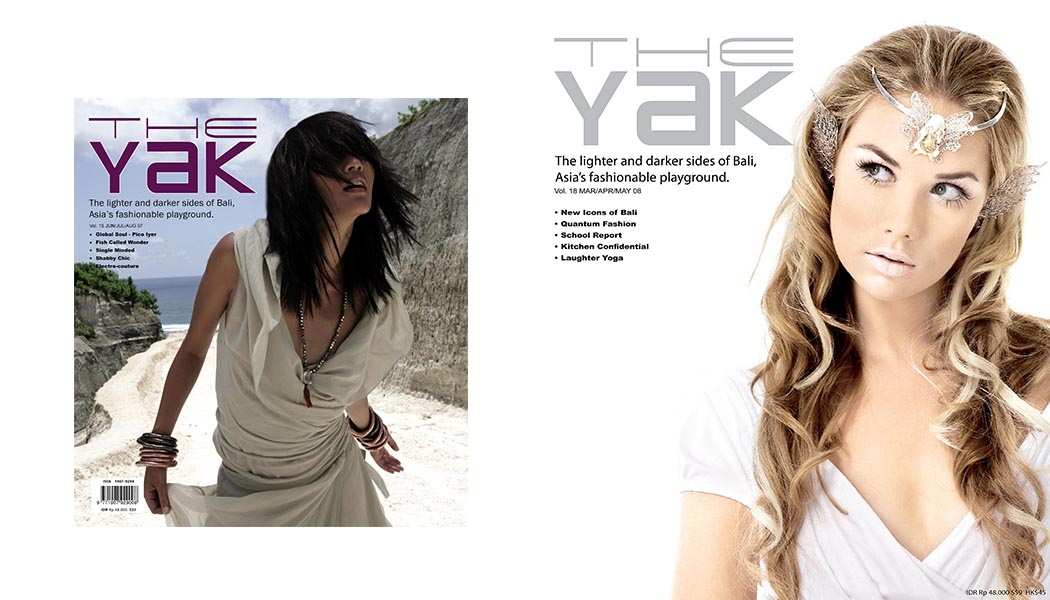 Meanwhile, Seminyak was growing into the sophisticated and sexy holiday destination we know it as today, and Bali in general was amping up the luxury game. Some might argue that The Yak was one of the catalysts for these changes, but at the very least, the relationship was symbiotic.

Yanie Mason of Bali Adventure Tours says: “The Yak has evolved with Bali’s ever-increasing quality, and by continuously showcasing these upmarket aspects of the island and making them look more appealing and hip, the island has shifted into a contemporary hotspot of Southeast Asia.”

Whether an instigator for change or a mutually morphing entity, there is no doubt that The Yak has become a beloved institution with people of all walks of life in Bali and around the world. In 2014, the readership poll results showed that the readers range in age from 14 years to 75 years, and of those multi-generational readers, 48 per cent are men and 52 per cent are women.

In addition, the magazine is visible in international locales as varied as Buenos Aires, Belgium or Brisbane, partly because there are copies in airport lounges like Cathay Pacific in Hong Kong and the Sky Lounge in Singapore, but mostly due to the fact that people can’t help but nick themselves a copy from the various venues that carry the mag in Bali. 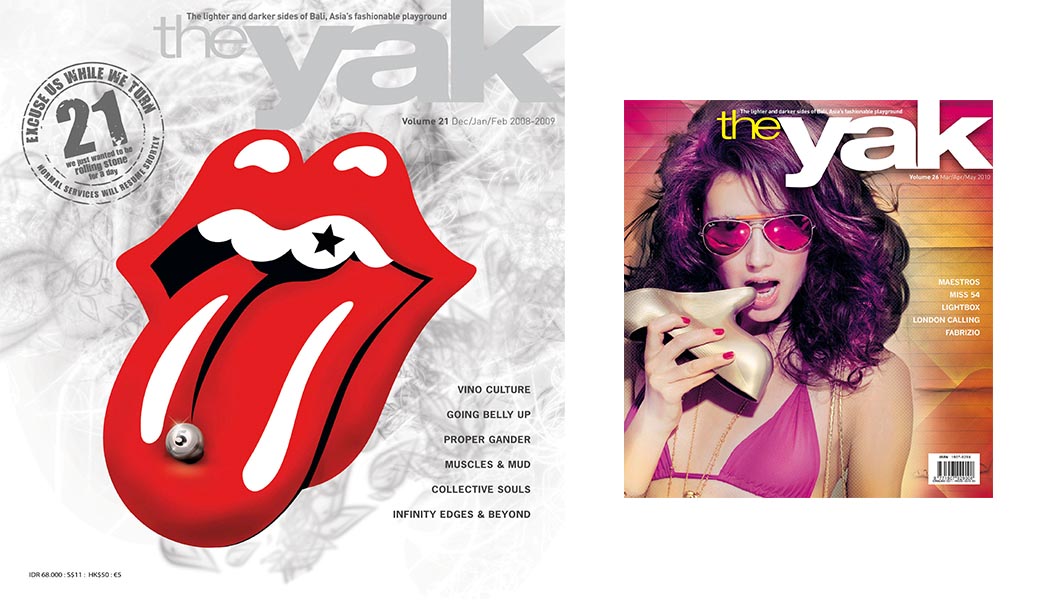 Marco Groten, General Manager of Alila Villas Uluwatu says: “I remember picking up a copy in a shop somewhere in Seminyak while I was waiting for my wife. We were living in Thailand and I was looking for opportunities to return to Indonesia, and the write-ups and advertisements had caught my eye. Usually I’m the one who wants to leave the shop first, but that time my wife asked me whether I was ready to leave. The magazine had a sticker on it that said ‘Venue copy, for your reading pleasure’, but I was glad I’d brought a big bag so I could continue reading it further during our holiday. This was probably about nine years ago, and I still read every issue from A to Z.”

Besides the print version of the magazine, The Yak also offers the Yak APP, a guidebook application for Bali that was the very first of its kind on the island; a fully responsive website that works on all devices and gets up to 100,000 page views a year, and a Facebook page that reaches up to 25,000 people every week.

Nigel says:  “As soon as we started to bring the idea of great content to our online channels, we started to see greater numbers. People want to be entertained, compelled, grabbed by great ideas, great writing and photography… this is what we have brought from our print experience into the new world order of online content. We give Yak people exceptional quality, whether it’s on paper or through the medium of their iPhone or laptop.” 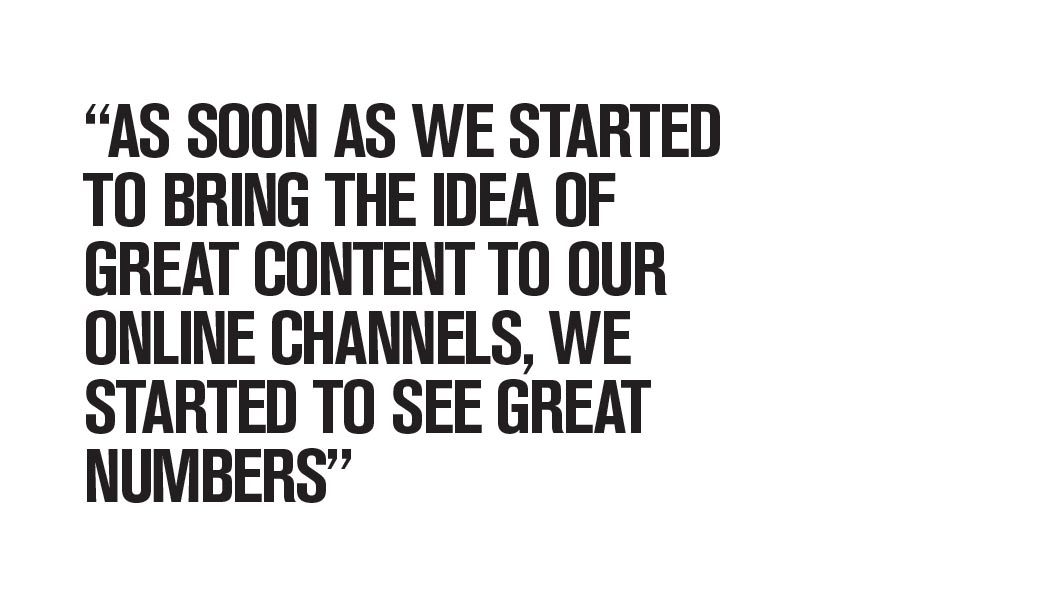 And as always, The Yak is always at the forefront of what they do, refusing to rest on simple words and pictures alone. Nigel says: “We try to film every fashion shoot behind the scenes. We make videos of our events. We work with internationally known stylists, photographers and writers. We take a 360 degree approach to content and quality.”

This means all readers, tech-savvy or not, and actually physically on Bali or not, can enjoy insider access to what is going on around the island. Moreover, Bali-based businesses have multiple mouthpieces to let people know what exciting things they are up to. In essence, the magazine truly is a window into the world of southern Bali. 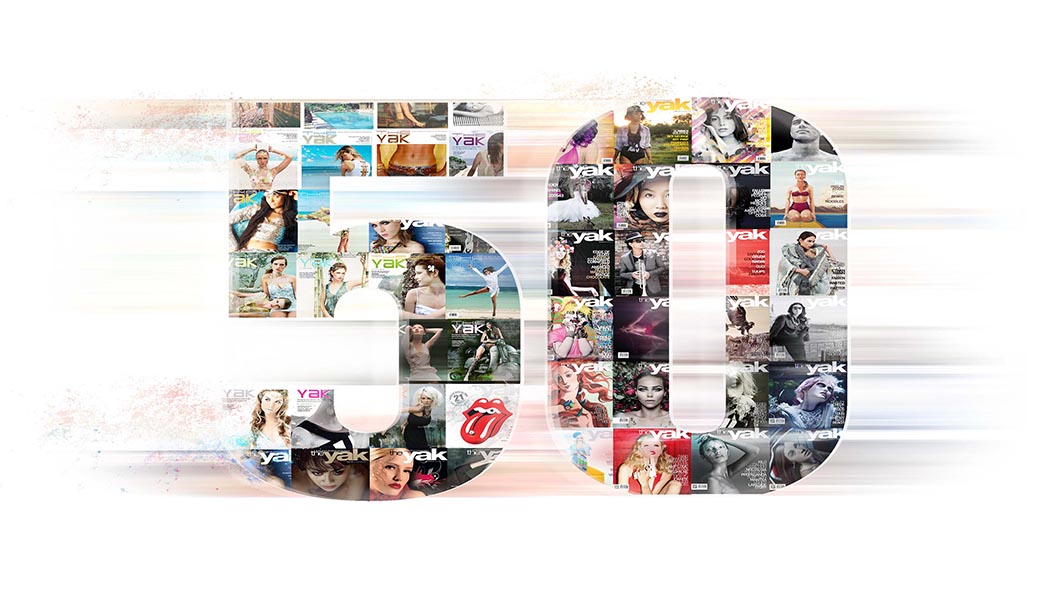 Sophie says: “The unique thing about The Yak is it is what I call “destination sensitive”. Whatever is in the magazine is about Bali or people connected to Bali. We might do one ‘outside’ travel story, but all our advertisers are either from Bali or Bali-based, and we talk about Bali products and Bali venues. It has always been destination sensitive, which is quite unique because everyone else is always trying to cover all bases, all places, all locations. We don’t. We just cover just this one, as beautifully as we can.”

To sum up perfectly, Nigel says: “I think people recognize that it’s creative and passionate and quirky. It’s an unusual product that defines an unusual way of life. It’s an identity that is very much about freedom and fashion and quality and doing what you want, being independent and doing it in style. We’ve had a good time doing it and we’re still having a good time. It’s a great privilege.” 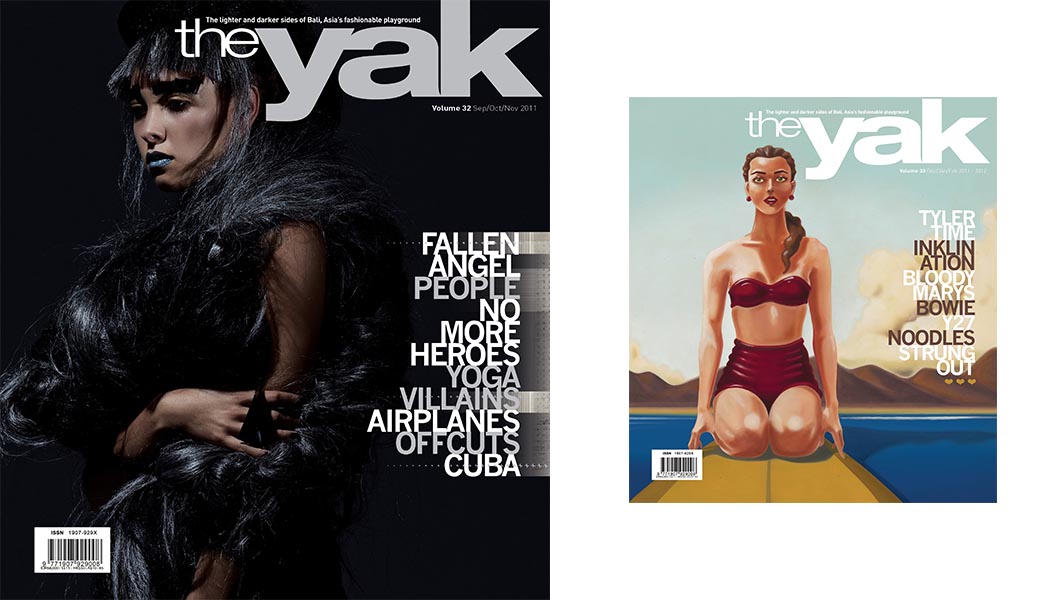 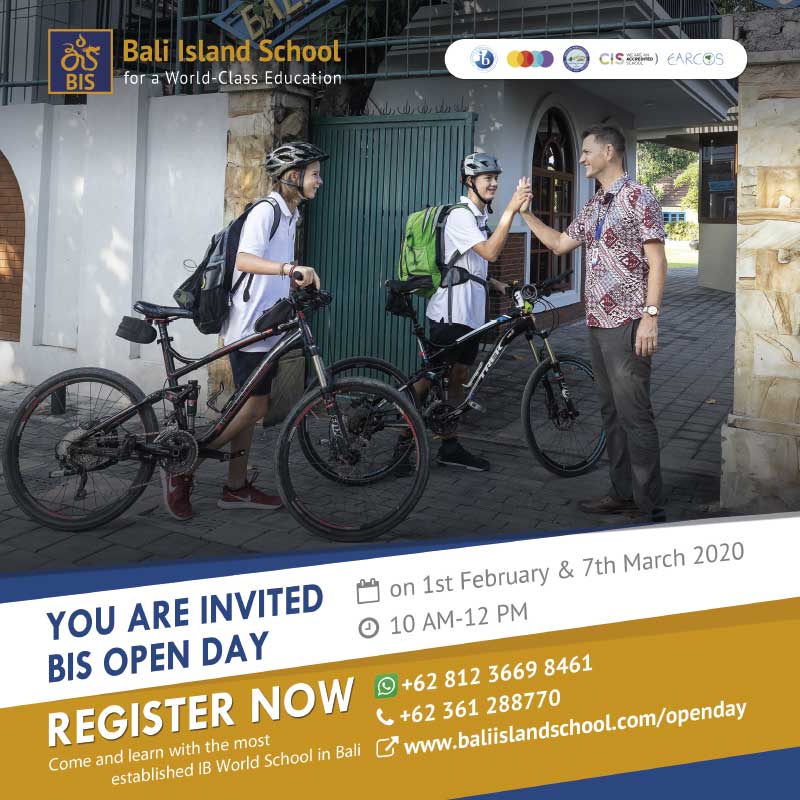 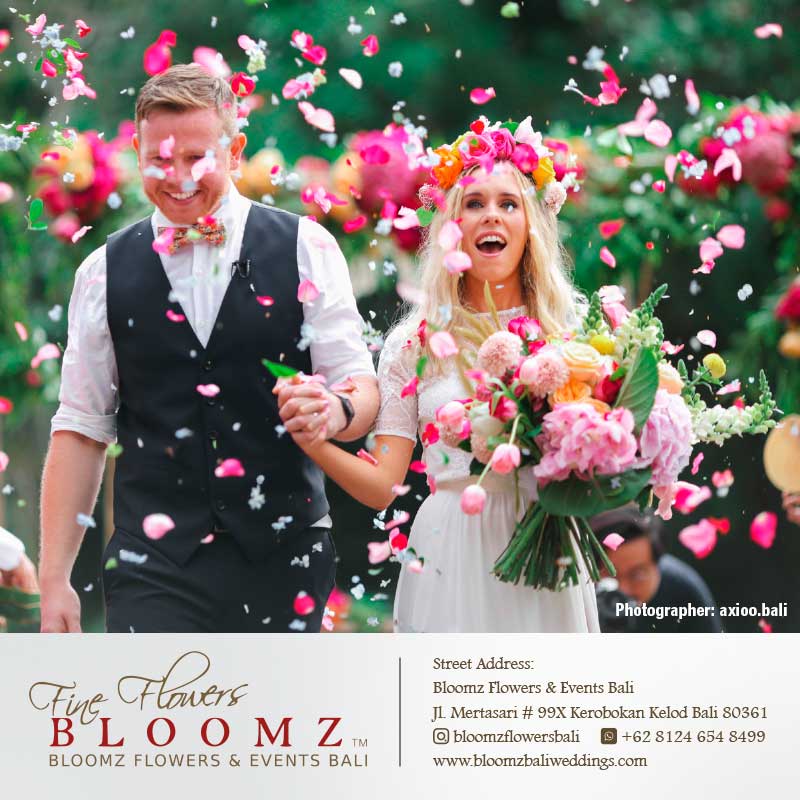 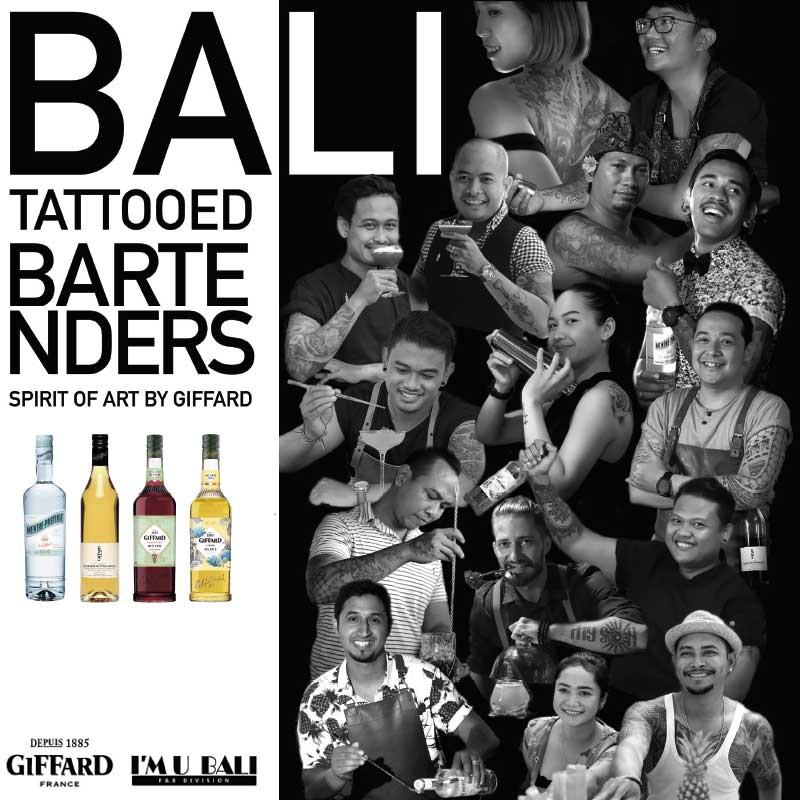 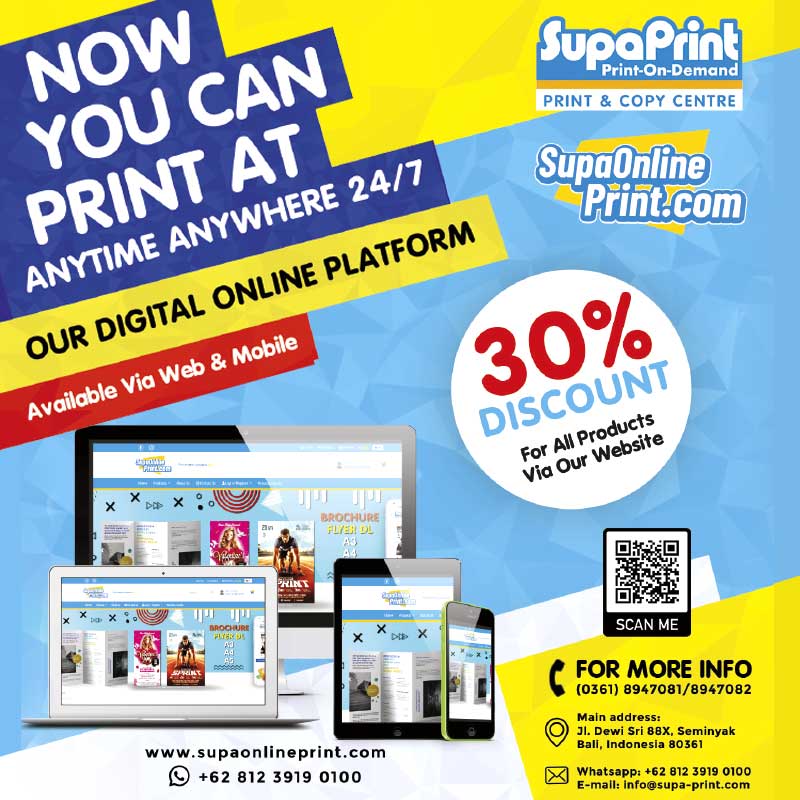 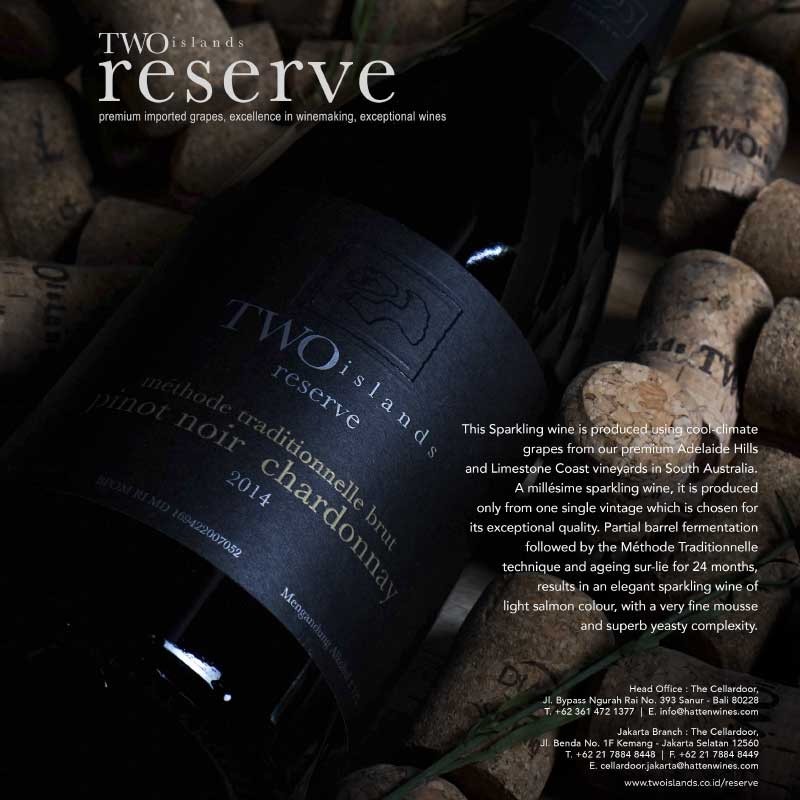 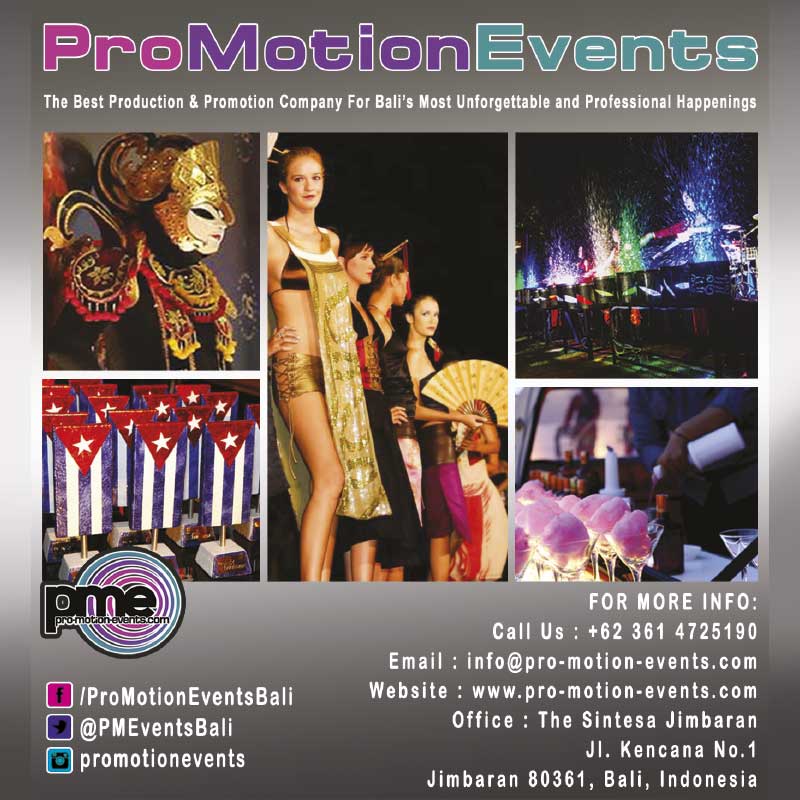